Discover the Basics of the Book of Ephesians

This introductory course is designed to provide key insights into the book of Ephesians by pulling together a number of key resources: overview videos from Fast Facts and The Bible Project, helpful contextual information from The ESV Study Bible, commentary recommendations from The Gospel Coalition, a single sermon that sums up the book from beginning to end by Mark Dever, and much more. By watching, listening to, and reading these resources, you’ll be better prepared to read, study, teach, or preach the book of Ephesians.

Pauline authorship of Ephesians was universally accepted until modern times. Today a number of scholars claim that it was written in Paul’s name by an unknown follower or imitator of Paul, and they give two main reasons: (1) the letter’s style and thought does not strike everyone as characteristically Pauline; and (2) the author of Ephesians does not seem to be familiar with the letter’s recipients (see Eph. 1:15; 3:2; 4:21), which seems odd given Paul’s extended stay at Ephesus (Acts 19:10).

However, there are sound reasons to affirm that Paul wrote Ephesians. First, the letter explicitly claims to be Paul’s (Eph. 1:1; 3:1), which should weigh heavily in the debate unless there is overwhelming evidence to the contrary. The early church—which rejected other spurious letters—unanimously accepted this letter to Ephesus as being written by Paul, and this was a city with a reputation for discernment regarding false apostolic claims (Rev. 2:2). Furthermore, letters in antiquity were usually transmitted through a person known by both author and recipient(s) who would have guaranteed the original copy’s genuineness and elaborated on its details—see note on Ephesians 6:21–22 regarding Tychicus.

Second, analyses of an author’s style are often subjectively based on incomplete evidence. With the aid of more sophisticated computer analysis, further careful study has shown that Ephesians has more similarities to Paul’s accepted style than was earlier recognized. In addition, recent research suggests that the role of secretaries in the composition of ancient letters should be given greater consideration than it has been given in the past. Ephesians does indeed demonstrate close similarity with Paul’s forms of expression and thought. Critics have used this evidence to ascribe authorship to someone Paul had influenced, but it is more likely that these marks of Pauline thought and writing style confirm that he himself wrote the book.

The question of Paul’s apparent unfamiliarity with his readers can easily be explained. Ancient archaeological evidence has shown that Ephesus controlled a large network of outlying villages and rural areas up to 30 miles (48 km) from the city. Also, Acts 19:10 reveals that reports of Paul’s preaching during his stay at Ephesus had radiated out to “all the residents of Asia.” Hence, Paul would not have been personally acquainted with newer pockets of believers in the Ephesian villages and rural farms that had sprung up since his stay in the city a few years before the writing of this letter.

Moreover, many have suggested that Ephesians in its present form stems from the Ephesus copy of a circular letter to several Asian churches that Tychicus was delivering in the course of his journey to Colossae, along with the letter to the Colossians (Col. 4:7–9). Therefore, the absence of personal greetings is no cause for surprise.

Finally, it would be extraordinarily odd for someone to write so forcefully that his readers should “speak the truth” and “put away falsehood” (Eph. 4:15, 25) in a letter he was deceptively forging! Consequently, it can be affirmed with good confidence that Paul wrote Ephesians.

The title “to the Ephesians” is found in many early manuscripts (see note on Eph. 1:1). It indicates that the letter was written to the churches in Ephesus and the surrounding dependent region.

Because Paul mentions his imprisonment (Eph. 3:1; 4:1; 6:20), this letter should be dated to c. A.D. 62 when Paul was held in Rome (Acts 28). Critics who date Ephesians later in the first century do so from doubts about Paul’s authorship rather than from strong evidence against the earlier date.

Ephesians exemplifies the genre of the NT epistle, with its salutation (including sender, recipients, and greeting), thanksgiving, exposition, exhortation, and closing (including final greetings and benediction). The main argument of the letter is punctuated by several prayers and an interior benediction (Eph. 3:20–21) that marks the transition from doctrinal affirmations to practical exhortations. Chapter 2 takes the form of a spiritual biography, in which Paul recounts the saving work of Christ in the life of every Christian, and especially in the lives of Gentiles who are now included in the one new people of God. In chapter 3 the apostle takes an autobiographical turn as he testifies about his calling to the Gentiles and his prayers for the Ephesian church. The paraenesis (series of moral exhortations) consists mainly of instructions for household conduct, both for the church as the household of faith and for individual believers in their domestic relationships. The famous description of the complete armor in the last chapter is an extended metaphor. Paul also catalogs the blessings of salvation in a lofty and exhilarating lyrical style.

Ephesians finds its central unity in the work of Jesus Christ and in the community of people (both Jews and Gentiles) who are corporately united in him. The strong opening statement of praise and the absence of any theological polemics make Ephesians pervasively positive in tone. The clear division of the epistle into two halves of nearly equal length (namely, the doctrinal section in chs. 1–3 and the practical section in chs. 4–6) also provides a strong sense of structural unity.

An important port city on the west coast of Asia, Ephesus boasted the temple of Artemis (one of the Seven Wonders of the ancient world). Just a few decades before Paul, Strabo called Ephesus the greatest emporium in the province of Asia Minor (Geography 12.8.15; cf. 14.1.20–26). However, the silting up of the harbor and the ravages of earthquakes caused the abandonment of the harbor city several centuries later. Today, among the vast archaeological remains, some key structures date from the actual time of the NT. 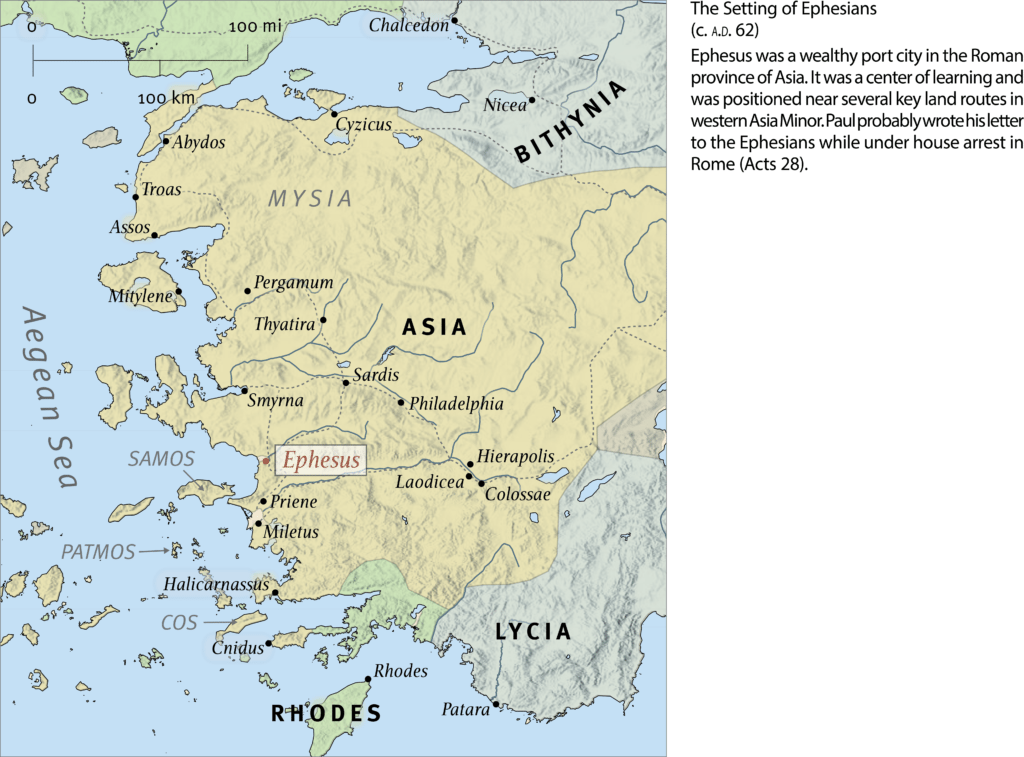 The grandiose theater, where citizens chanted “great is Artemis of the Ephesians” (Acts 19:29–40), had been enlarged under Claudius near the time when Paul was in the city. It held an estimated 20,000 or more spectators. The theater looked west toward the port. From the theater a processional way led north toward the temple of Artemis. In the fourth century b.c. the Ephesians proudly rebuilt this huge temple with their own funds after a fire, even refusing aid from Alexander the Great. The temple surroundings were deemed an official “refuge” for those fearing vengeance, and they played a central part in the economic prosperity of the city, even acting at times like a bank. A eunuch priest served the goddess Artemis, assisted by virgin women. Today very little remains of that once great temple beyond its foundations and a sizable altar, although the nearby museum displays two large statues of Artemis discovered elsewhere in Ephesus.

Other archaeologically extant religious structures include a post-NT temple of Serapis and several important imperial cult temples. Before Paul’s day, Ephesus had proudly obtained the right to host the Temple of the Divine Julius [Caesar] and the goddess Roma. The city later housed memorials to the emperors Trajan (A.D. 98–117) and Hadrian (A.D. 117–138); and it possessed a huge temple of Domitian (A.D. 81–96), which may have been constructed during the time the apostle John was in western Asia. Luke testifies to Jewish presence in Ephesus (Acts 18:19, 24; 19:1–10, 13–17), and this is confirmed by inscriptions and by literary sources (e.g., Josephus, Against Apion 2.39; Jewish Antiquities 14.262–264).

Civic structures during the time of Paul included the state agora (marketplace) with its stoa, basilica, and town hall. This spilled out onto Curetes Street, which contained several monuments to important citizens such as Pollio and Memmius. Curetes Street led to the commercial agora neighboring the theater; this large market square could be entered through the Mazaeus and Mithradates Gate (erected in honor of their patrons Caesar Augustus and Marcus Agrippa). Shops lined this agora and part of Curetes Street. A building across the street from the agora has frequently been called a brothel, although some have questioned this. On the way to the Artemis temple from the theater, one would have passed the huge stadium renovated or built under Nero (A.D. 54–68). 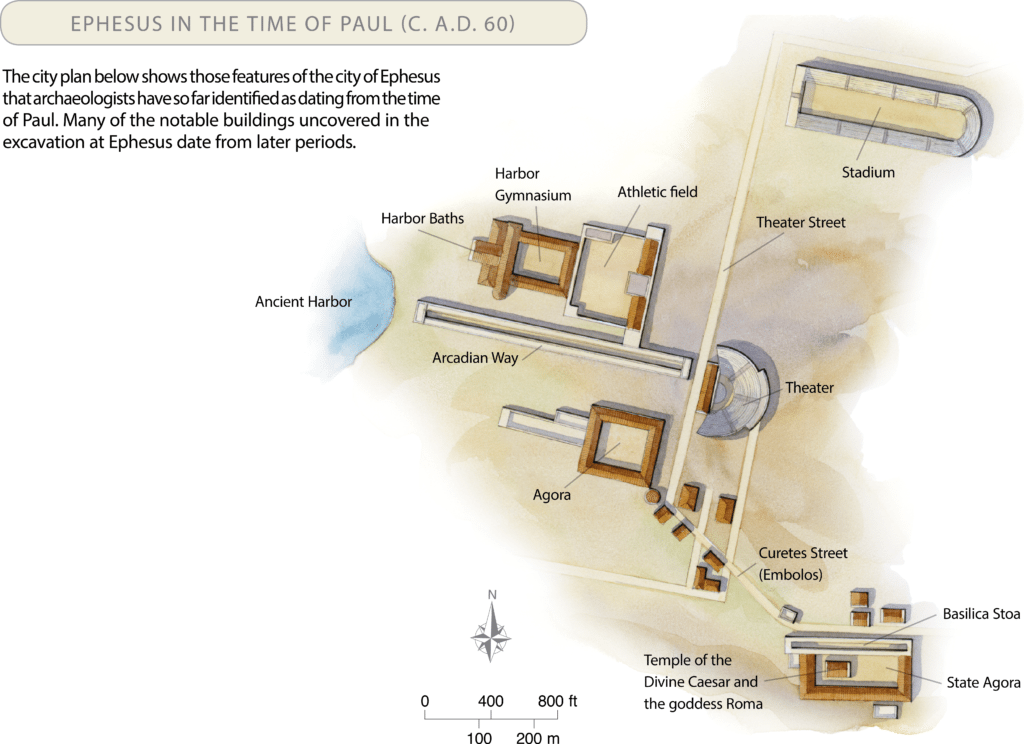 The wealth of some residents of Ephesus is apparent in the lavish terrace houses just off Curetes Street. Later inscriptions mention a guild of silversmiths and even give the names of specific silversmiths (cf. Demetrius the silversmith, mentioned in Acts 19:24). However, as in most Roman cities, many people would have been in the servant class, and others would not have claimed much wealth. By the end of the second century (after the NT period) many other monumental structures were added, including some important gymnasia and the famous Library of Celsus. Remains of the giant Byzantine Church of Mary remind one that this former pagan town later hosted an important church council (the Council of Ephesus, A.D. 431).

There are two main themes of Ephesians: (1) Christ has reconciled all creation to himself and to God, and (2) Christ has united people from all nations to himself and to one another in his church. These great deeds were accomplished through the powerful, sovereign, and free working of the triune God—Father, Son, and Holy Spirit—and are recognized and received by faith alone through his grace. In light of these great truths, Christians are to lead lives that are a fitting tribute of gratitude to their great Lord.

There was no specific occasion or problem that inspired this letter, though Paul does mention that he desired the Ephesians to know how he was faring in confinement (Eph. 6:21–22). Ephesians articulates general instruction in the truths of the cosmic redemptive work of God in Christ; the unity of the church among diverse peoples; and proper conduct in the church, the home, and the world. Unity and love in the bond of peace mark the work of the Savior as well as Christians’ grateful response to his free grace in their lives.

Ancient Ephesus forms an appropriate background to the book of Ephesians because of this city’s fascination with magic and the occult (see Acts 19:19, and below). This helps explain Paul’s emphasis on the power of God over all heavenly authorities and on Christ’s triumphant ascension as head over the church and over all things in this age and the next. The Ephesians needed to be reminded of these things in order to remain resolute in their allegiance to Christ as the supreme power in the world and in their lives.

Christians have experienced in Christ the salvation and blessings that God promised through the ages, and look forward to the consummation of God’s purposes in Christ.