Discover the Basics of the Book of Colossians

This introductory course is designed to provide key insights into the book of Colossians by pulling together a number of key resources: overview videos from Fast Facts and The Bible Project, helpful contextual information from The ESV Study Bible, commentary recommendations from The Gospel Coalition, a single sermon that sums up the book from beginning to end by Mark Dever, and much more. By watching, listening to, and reading these resources, you’ll be better prepared to read, study, teach, or preach the book of Colossians.

Paul and Timothy are explicitly named as the authors of Colossians (Col. 1:1). Timothy probably served as Paul’s secretary (amanuensis) since the first person singular (“I”) is used throughout the letter (e.g., Col. 1:24). The title indicates that Paul wrote the letter to Christians living in the small city of Colossae.

Some scholars have doubted Paul’s authorship based on (1) a style of writing that they deem inconsistent with his uncontested letters, and (2) a set of theological statements that they regard as more developed than what he wrote in previous letters. The latter objection is readily answered by the unique situation reflected in the letter, leading Paul to address these particular concerns with the most relevant theological emphases. There is nothing in the theology that is inconsistent with what he wrote elsewhere, and many of his statements are simply logical developments of previous thoughts. The argument about style is much weaker since there is, in fact, strong continuity of style between this letter and his other letters. It is also quite precarious to make a judgment about authorship based on such a small sampling of letters. It is inappropriate to expect an author to demonstrate stylistic uniformity throughout all his works.

The letter was probably written c. A.D. 62. Paul wrote it at roughly the same time that he wrote Philemon and Ephesians. All three letters were sent with Tychicus (see Eph. 6:21) and Onesimus. This date assumes that the imprisonment Paul speaks of is his Roman imprisonment that followed his harrowing voyage to Rome (Acts 27–28). 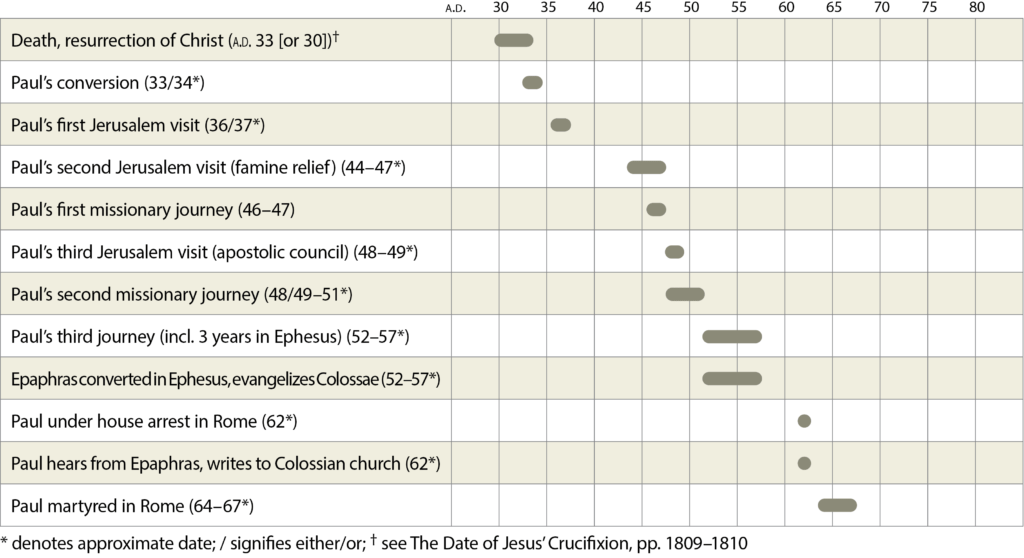 Colossians closely follows the epistolary conventions of Paul’s other letters to congregations in the early church. The letter opens with the customary greetings, including thanksgiving and prayer. The main body of the letter is divided fairly equally between theological exposition and practical application (including household instructions), followed by personal greetings that reinforce the relationship between the writer and his correspondents. Because of its polemical (persuasive and argumentative) thrust, Colossians also takes the form of a disputation in which the apostle argues the gospel side of a debate between the all-sufficiency of Christ and the spurious claims of man-made religion. The lines of praise given to Christ in Colossians 1:15–20 have the form of a hymn or creed celebrating him.

As one of the most thoroughly Christ-centered books in the Bible, Colossians finds its essential unity in the divine and exalted person of the preeminent Christ. The letter presents variations on this central theme, with Christ celebrated as the object of the believer’s faith, the image of the invisible God, the creator of all dominions, the head of the church, the firstborn from the dead, the unifier and reconciler of all things, the Savior through his sufferings on the cross, the treasury of all wisdom and knowledge, the triumphant victor over sin and Satan, the exalted Lord of life and glory, and the true pattern for the life of Christian faith. The letter is also unified by Paul’s pastoral concern to dissuade the Colossians from getting caught up in useless religious regulations and to awaken exaltation of Christ and exultation in him. Paul writes with stylistic flair and aphoristic brilliance. 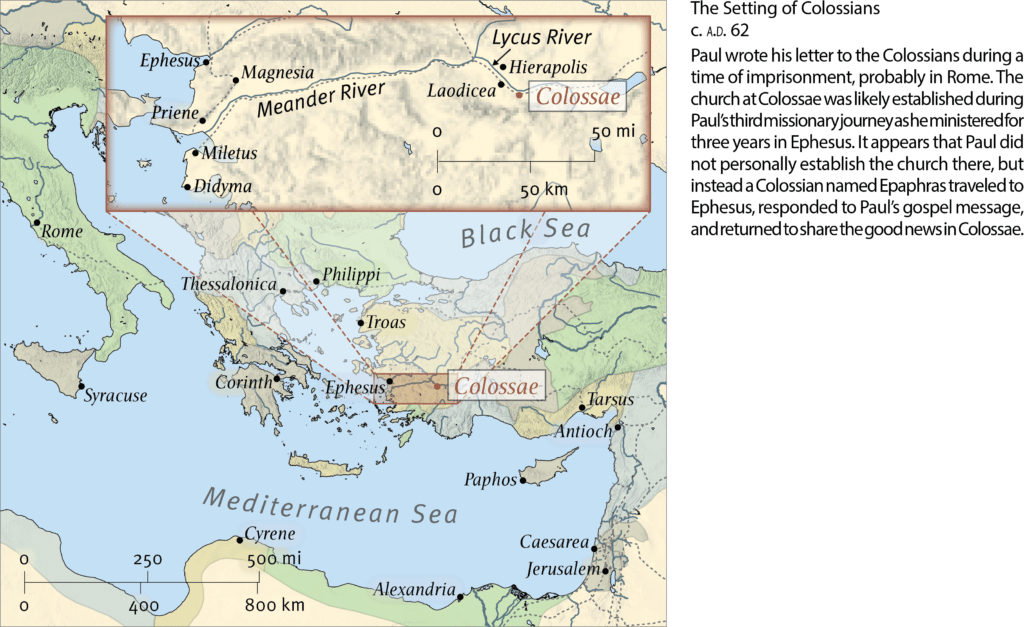 Christ is Lord over all of creation, including the invisible realm. He has secured redemption for his people, enabling them to participate with him in his death, resurrection, and fullness.

The church at Colossae apparently got its start during Paul’s three-year ministry in Ephesus (A.D. 52–55). During this time, a Colossian named Epaphras probably traveled to Ephesus and responded to Paul’s proclamation of the gospel (see Acts 19:10). This new believer returned to his hometown and began sharing the good news of Christ, which resulted in the birth of the Colossian church (Col. 1:7). At the time of this writing, Epaphras is with Paul in Rome and has likely shared the bad news that there was a dangerous teaching threatening the church at Colossae (Col. 4:12). Paul writes this letter to respond to this situation and to encourage these believers in their growth toward Christian maturity.

Scholars have long been puzzled over the precise nature of the destructive teaching facing the Colossians. This uncertainty does not, however, hinder accurate interpretation of the letter’s rich theological teaching. A previous generation of scholars thought that the problem at Colossae was Gnosticism, an early heresy that taught that the world was created by an inferior god, that the material world is evil, and (in some cases) that asceticism should be practiced. But an improved understanding of Gnosticism, aided in part by the discovery of Gnostic documents in Egypt, has led most scholars to discount this interpretation. Missing from Colossians is any polemic against the Gnostic view that there is an unknown god who is distinct from the creator God. There is also no discussion of the Gnostic conviction that matter and material existence are inherently evil.

The fact that there are many distinctively Jewish elements to the false teaching (such as Sabbath observance, Jewish festivals, and an interest in angels; see Col. 2:16–18) has led a number of scholars to contend that the competing teaching had something to do with Judaism. Some have suggested that a form of Jewish mysticism had influenced the church, resulting in Colossian Christians engaging in ascetic practices (such as fasting) in preparation for a visionary ascent to heaven where they would join the angels in worshiping God at his heavenly throne (see Col. 2:18). This is a possibility, but it does not provide the most convincing explanation of the “worship of angels” and some of the other elements of the false teaching (Col. 2:18).

Others advocate a similar view, contending that the principal problem at Colossae was not a dangerous teaching from within the church but one coming from outside. They suggest that the local Jewish synagogue was mounting a campaign to discredit and denounce the Christian assembly, especially because this group of predominately Gentile believers was now claiming a Jewish heritage in the OT. One of the problems with this view, however, is that the role of the Jewish law is never mentioned in Colossians. It also does not adequately take into account the role of other syncretistic elements from other local religions.

The best explanation for this dangerous teaching is that it comes from the context of the local Jewish and pagan folk belief. A central feature of the local folk belief was a tendency to call on angels for help and protection from evil spirits. This characteristic is well attested in many inscriptions and ancient documents. For instance, a magical stone amulet designed to be worn around the neck for protection from evil spirits reads, “Michael, Gabriel, Ouriel, Raphael, protect the one who wears this. . . . Flee, O hated one, Solomon pursues you.”

What likely happened at Colossae is that a shaman-like figure within the church had attracted a following and was presenting himself as something of a Christian spiritual guide (cf. “his sensuous mind,” Col. 2:18). This person probably claimed to have superior insight into the spiritual realm and was advising the Colossian Christians to practice certain rites, taboos, and rituals as a means of protection from evil spirits and for deliverance from afflictions. When Paul hears of the spreading influence of this teaching that devalues Christ and fails to appreciate the new identity of believers “in Christ,” he writes this letter of warning and encouragement. He does not minimize the threat presented by the demonic powers but emphasizes the supremacy of Christ over all powers. He asserts the unity of Christians with the exalted Christ, which entails their sharing in his power and authority.

Paul also takes the opportunity to encourage these believers to press on to maturity in Christ by continuing in their battle against sin, pursuing holiness in Christ, and learning to live as distinctively Christian households.

Christians are to hold fast to the one way of salvation in Christ, in contrast to false teaching.