C. Samuel Storms (b. 1951) is the founder of Enjoying God Ministries. He pastored for many years, and he was an associate professor of theology at Wheaton College from 2000 to 2004. He recently accepted the invitation to become Senior Pastor of Bridgeway Church in Oklahoma City, Oklahoma, where he will begin pastoring on September 14. He has earned degrees from the University of Oklahoma (B.A.), Dallas Theological Seminary (Th.M.), and the University of Texas at Dallas (Ph.D.). His website lists his voluminous publications, includes a blog, shares recommendations, and hosts articles on biblical, theological, and historical studies. 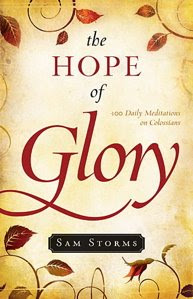 He recently authored The Hope of Glory: 100 Daily Meditations on Colossians (Wheaton: Crossway, 2007). More information about the book is available here.

1. You explain that you wrote this book “for the average, educated Christian believer” who is “passionate to know Christ better, hungry to be filled with the knowledge of the truth, and desperate to see him lifted high and holy in [his/her] life and in the experience of the church as a whole” (p. 12). How is your book different than a commentary?

Most commentaries focus almost entirely on exposition with little emphasis on application and contemporary relevance. Whereas I do provide careful exegetical analysis of the text, it is always with a view toward the concrete realities of everyday life and personal transformation. I’ve worked hard to pay careful attention to the context and flow of Paul’s argument while always asking questions of the text that will equip people to live in a way that magnifies the sufficiency of who Christ is for us. I suppose someone could use The Hope of Glory as a commentary, especially pastors who are preaching through Colossians, but it is primarily designed for average Christians who long to dig more deeply into God’s Word and to experience its life-changing power.

2. What is the story behind this book? What motivated you to write it?

I preached through Colossians twice in past years and have always loved the book. I was stirred to write this series of meditations (The Hope of Glory being the first of several) largely from the painful realization that many believers are frustrated in their efforts to read and understand God’s Word. They don’t know how to study it, they get overwhelmed and lost, they often confess boredom in their daily devotions. My aim was to unpack and apply the truth of Colossians in a way that would awaken people’s hearts to the glory of God in Christ as revealed in Scripture.

As you probably know, the church has gradually abandoned any sense of the functional authority of Scripture, by which I mean the role Scripture plays on a daily basis of shaping and fashioning how we think and choose and feel and live. Mere theological affirmations of the authority of Scripture aren’t enough. The church needs to experience again the practical, sin-killing, Christ-exalting, soul-satisfying power that is imparted to the heart through the inspired text.

3. One of the most challenging facets of sermon preparation is moving from exegesis to exposition to application. How might pastors use your book in conjunction with commentaries while preaching on Colossians?

“Moving from exegesis to application” is a great way of describing the essence of what this book is about. There is a sense in which these meditations are mini-sermons, not “mini” in substance but in size. I hope they demonstrate to pastors how the theological depth of God’s Word can bring life and joy and hope and change to individual lives. As for pastors preaching through Colossians, I suggest they use my book last of all. They need to engage in their own exegesis of the text before turning to The Hope of Glory for help with bringing the meaning of the ancient text into contemporary settings.

4. What have you found to be some of the most useful commentaries (beginner, intermediate, and advanced) on Colossians?

Sadly, Colossians has been somewhat neglected by scholars (in my opinion).

5. How would you concisely state the theme of Colossians?

The theme is largely tied up with the problem Paul was addressing in first century Colossae. The sufficiency of Christ was being undermined at every turn. That is why I would describe the theme in these words taken from the Introduction to my book (p. 12):

6. What advice would you give to people as they read The Hope of Glory?

Keep the biblical text in front of you at all times! Don’t become overly dependent on my book or any other. Read and re-read, then meditate on the inspired word. Memorize it. Write it down and carry it with you. Let the beauty of Scripture seep into your soul. Then turn to The Hope of Glory and pray that God would open your eyes to the glory of his Son.

7. What are some of your forthcoming writing projects (short-term and long-term)?

8. Many thanks, Sam, for taking time to serve the readers of JT’s blog with such helpful comments!

You’re welcome. It was my pleasure. And many thanks to you and the others who are filling in for Justin while he languishes at a John Owen conference in England. Poor soul!

Thomas Kidd
From ‘Wretched’ to ‘Needy’: Changing a Classic Hymn
Christianity, Warfare, and American National Identity: An Interview with Benjamin Wetzel
Is the Declaration of Independence a Christian Document?
Melissa Kruger
Sneak Peek Interview: Megan Hill’s New Children’s Book
Sneak Peek Interview: Wendy Alsup
Sneak Peek Interview: Trillia Newbell
Trevin Wax
My Recent Stay at The Kilns in Oxford
The Body Is Bigger Than You Think
‘The Thrill of Orthodoxy’ Now Available
Kevin DeYoung
A New (Old) Blog
Life and Books and Everything: American History and the Historian’s Task with Wilfred McClay
Life and Books and Everything: What’s Going Right in the Church?
LOAD MORE
Loading