Discover the Basics of the Book of Philippians

This introductory course is designed to provide key insights into the book of Philippians by pulling together a number of key resources: overview videos from Fast Facts and The Bible Project, helpful contextual information from The ESV Study Bible, commentary recommendations from The Gospel Coalition, a single sermon that sums up the book from beginning to end by Mark Dever, and much more. By watching, listening to, and reading these resources, you’ll be better prepared to read, study, teach, or preach the book of Philippians.

Paul is the stated author of Philippians, and few have questioned his authorship. It was written to the Christians in the Roman colony of Philippi.

Scholars have debated Paul’s location when he wrote Philippians. Caesarea, Ephesus, and Rome have been the three most commonly proposed locations. Paul was in fact imprisoned in the “praetorium” of Herod the Great in Caesarea (Acts 23:35; cf. ESV Study Bible footnote on Phil. 1:13) around A.D. 60. But his statements to the Philippians about his possibly imminent death (e.g., Phil. 1:20) would be puzzling if coming from Caesarea, since he would have been able to request a trial in Rome, as in fact he did. Ephesus was close enough to Philippi for Paul to receive regular news from there, but there is no mention of his ever being imprisoned in Ephesus. On balance, it seems most likely that the letter was written from Rome, c. A.D. 62. This also fits most naturally with the mention of the praetorium and “Caesar’s household” (Phil. 1:13 and Phil. 4:22). 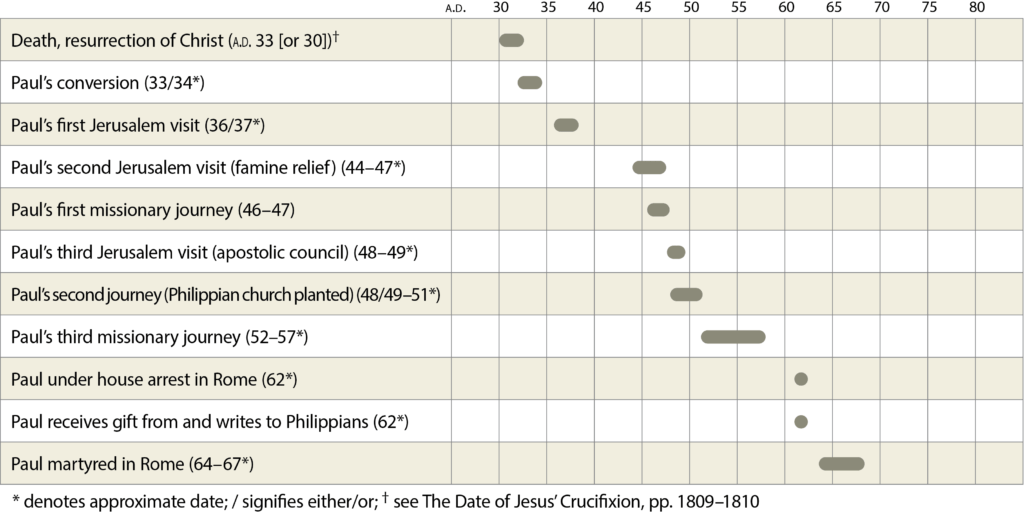 Philippians follows many of the same conventions as the other Pauline epistles. The salutation, thanksgiving, prayer, body, paraenesis (series of moral exhortations), greeting, and benediction are all readily identifiable. Today Philippians would be called a missionary support letter. Paul is writing to people who help provide the prayer support and financial assistance necessary for his ministry as an apostle to the Gentiles. To fulfill his end of the partnership, Paul assures the Philippians of his prayers, updates them on his personal circumstances, reports on the effectiveness of gospel ministry in his area, offers spiritual encouragement, and expresses heartfelt gratitude for the many ways they support his ministry. With its highly patterned lines of praise to Christ, Philippians 2:5–11 is usually identified as one of the earliest hymns or confessions of the Christian church. The letter exhibits such stylistic techniques as aphorism, metaphor, and lyric to heighten the impact of the writing.

Philippians is unified by its joyful, almost exuberant mood (the words for “joy” or “rejoice” occur more than a dozen times); by the strong personal relationship between its author and its recipients (a relationship that is almost constantly in view, from the beginning of the letter to the end); and by the many connections Paul draws between the saving work of Jesus Christ and the servant ministry of his followers, who are called to live and die according to the pattern of the sufferings, death, resurrection, and glorious exaltation of Jesus himself.

After their victory at the Battle of Philippi in 42 B.C., Antony and (later) Augustus re-founded this Macedonian city with army veterans. Its special status as an Augustan colony exempted the city from significant forms of taxation and gave it additional privileges of land ownership. The city encompassed good agricultural land, and it was on the Egnatian Way, an important Roman commercial road (built mid-2nd century B.C.). The Roman ethos of the colony is evident in Philippi’s Latin civic inscriptions and in the worship of Roman gods. Extant archaeological remains from Paul’s day testify to the presence of a theater, a large forum (beneath the later 2nd-century-A.D. forum), shops, and two city gates (designated Krenides to the west and Neapolis to the east). There is a speaker’s platform (Gk. bēma) in the existing second-century forum between a pair of large fountains. One small stone crypt (built over a cistern) near the forum was designated in later church tradition as the prison site of Paul and Silas (Acts 16:23–34). Other structures dating from NT times and the early centuries of the church (e.g., a sports facility, pagan temples, octagonal and basilica style churches) can still be seen in Philippi. 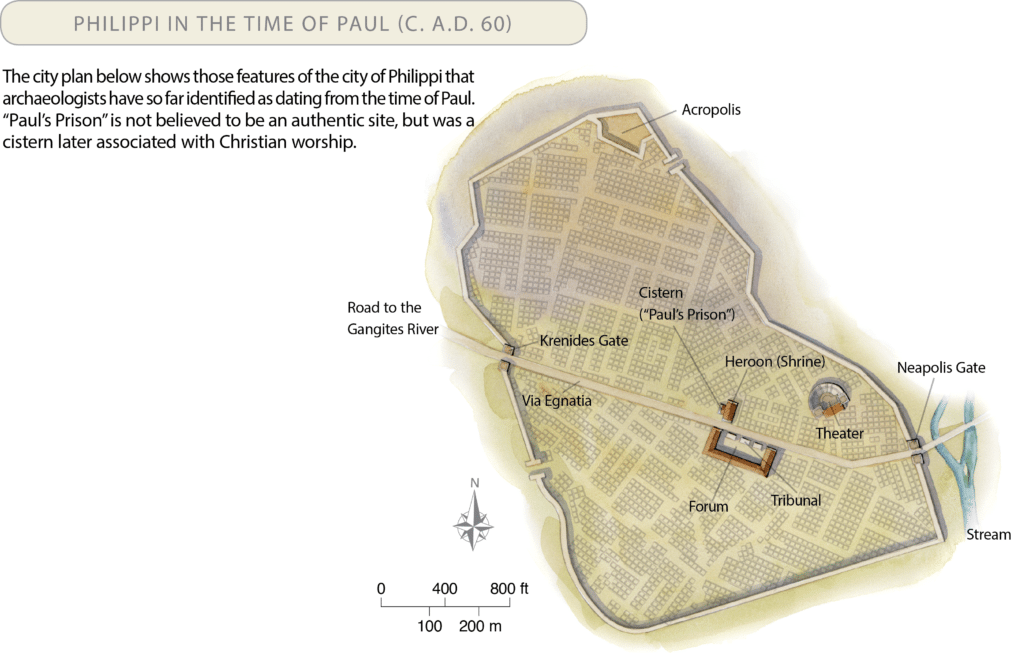 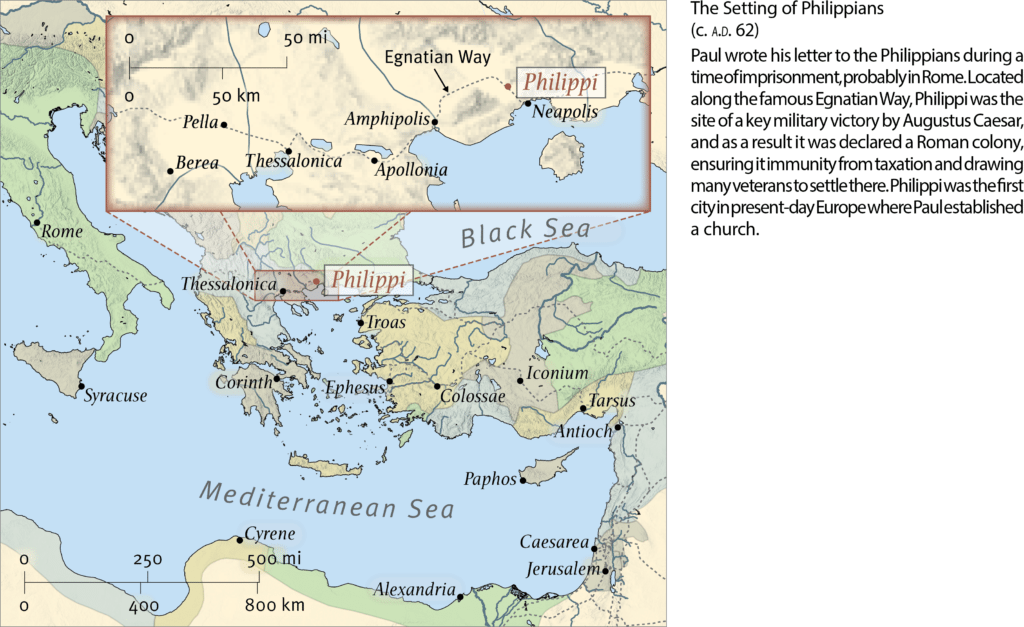 The chief theme of Philippians is encouragement: Paul wants to encourage the Philippians to live out their lives as citizens of a heavenly colony, as evidenced by a growing commitment to service to God and to one another. The way of life that Paul encourages was manifested uniquely in Jesus Christ; it was also evident in the lives of Paul, Timothy, and Epaphroditus.

The church at Philippi had a special significance for Paul, since it was the first church he founded in Europe (see Acts 16:6–40). The first convert was Lydia, a seller of purple goods, and women continued to have a prominent role in the Philippian church (e.g., Phil. 4:2). Paul and Silas were imprisoned there for exorcising a demon from a fortune-telling slave girl, but God miraculously delivered them, and they proclaimed the gospel to the Philippian jailer. Paul likely visited the Philippians a few times after his initial departure, and they maintained active support for his ministry (Phil. 4:15–16).

Paul wrote to the Philippians from prison (see above), prompted in part by his reception of their latest gift, sent with Epaphroditus (himself a member of the Philippian congregation). But the letter is far more than an extended thank-you note. Paul wanted to pass along the important news that Epaphroditus had recovered from a serious illness (Phil. 2:25–30), and that he was sending him along to them with the hope that soon he might also send Timothy for a visit (Phil. 2:19). Timothy and Epaphroditus were also mentioned because they exemplified the Christ-centered, gospel-focused life Paul wanted the Philippians to live.

Paul himself also wanted to encourage the Philippians in their faith, and his imprisonment meant he could do that only through a letter. Even a house imprisonment (assuming Paul was in Rome, Acts 28:16) could have been a source of great anguish, particularly with the possibility of execution looming, and so Paul wanted to assure the church that he was still in good spirits through his faith in Christ (Phil. 1:12–18). He was also eager to thank them for their continued support: imprisonment carried with it a social stigma, and it would have been easy for the Philippians to turn their back on Paul at this point. But they had remained faithful to him.

Yet Paul’s purpose in writing goes even further. He is above all concerned that the Philippians continue to make progress in their faith (Phil. 1:25). While there were no doubt conflicts within the congregation (notably that of Euodia and Syntyche, Phil. 4:2), the Philippians appear to be a healthy congregation, in contrast to the troubled groups in Corinth and Galatia. Can they then relax and rest? Paul’s answer is an emphatic no. The world is too perilous, and the gospel too glorious, for them to be content with past achievements (Phil. 3:12–16). They must follow Paul’s example and “press on toward the goal for the prize of the upward call of God in Christ Jesus” (Phil. 3:14).

Paul explains what spiritual progress will look like. Christian maturity does not come through special mystical insights available to only a few, but rather through the patient practice of the familiar virtues of love and service to others. Paul presents himself as one model for such a lifestyle (Phil. 1:12–18; 3:17; 4:9), and he commends Timothy and Epaphroditus in similar terms (Phil. 2:19–30). But the supreme model for progress in faith is Jesus himself, and the centerpiece of Philippians is the magnificent “hymn of Christ” in Philippians 2:5–11. Jesus willingly let go of the privileges of divine glory to take up the form of a servant, and even embraced the ultimate humiliation of the cross, in order to liberate the world from sin. He is thus accorded the highest glory, receiving universal worship as God’s Messiah.

Those who follow Christ’s example have the hope that God will also vindicate them on the day of Christ, and thus they can rejoice (Phil. 1:18; 3:1; 4:4). They can also be confident that God will not leave them alone to make their way through the world as best they can. Spiritual progress involves effort: they are encouraged to “work out [their] own salvation with fear and trembling” (Phil. 2:12). But they can do so knowing that “it is God who works in [them], both to will and to work for his good pleasure” (Phil. 2:13).

God works in the Philippians in accordance with the achievements of Christ, who has fulfilled the promises of the OT (cf. 2 Cor. 1:20).