Discover the Basics of the Book of Matthew

This introductory course is designed to provide key insights into the book of Matthew by pulling together a number of key resources: overview videos from The Bible Project, helpful contextual information from The ESV Study Bible, commentary recommendations from The Gospel Coalition, a single sermon that sums up the book from beginning to end by Mark Dever, and much more. By watching, listening to, and reading these resources, you’ll be better prepared to read, study, teach, or preach the book of Matthew.

Since none of the four Gospels includes the names of their authors in the original manuscripts, they are all technically anonymous. This is not surprising, since the authors likely compiled their Gospel accounts for members of their own churches, to whom they were already well known. However, historical documents from early church history provide significant insight into the Gospels’ authorship. The earliest traditions of the church are unanimous in attributing the first Gospel to Matthew, the former tax collector who followed Jesus and became one of his 12 disciples. The earliest and most important of these traditions comes from the second century in the writings of Papias, bishop of Hierapolis in Asia Minor (c. A.D. 135), and Irenaeus, bishop of Lyons in Gaul (c. 175). Because these early church leaders had either direct or indirect contact with the apostolic community, they would have been very familiar with the Gospels’ origins. Moreover, no competing traditions now exist (if they ever did) attributing Matthew’s Gospel to any other author. If Matthew did not write the book, it is hard to see why the false ascription would bear the name of a relatively obscure apostle when more well-known and popular figures could have been chosen (e.g., Philip, Thomas, or James).

Matthean authorship is denied by some modern scholars, especially on the view that the author of Matthew borrowed much of his material from Mark’s Gospel. Given that Matthew was an apostle while Mark was not, it is assumed that Matthew would not have needed (or chosen) to depend on Mark’s material. But even if Matthew did borrow from Mark’s Gospel, it would only have added to Matthew’s apostolic credibility since the evidence suggests that Mark himself relied extensively on the testimony of the apostle Peter.

When Jesus called him, Matthew was sitting in the tax collector’s booth (Matt. 9:9), collecting taxes for Herod Antipas, and this may have been along a commercial trading route about 4 miles (6.4 km) from Capernaum. However, since the narrative surrounding Matthew’s call is set in Capernaum (Matt. 9:1, 7, 10; cf. 4:13), the tax booth may have been on the Sea of Galilee at Capernaum, since Herod also taxed fishermen. At his calling in the first Gospel he is referred to as “Matthew” (Matt. 9:9), while Mark’s and Luke’s Gospels describe him as “Levi the son of Alphaeus” (Mark 2:14) and “Levi” (Luke 5:27). The reason for the variation in names has elicited much discussion, but most scholars believe that the tax collector had two names, Matthew Levi, which he either possessed from birth or took on following his conversion. His occupation as a tax collector implies that he had training in scribal techniques and was thus able to write, while his identity as a Galilean Jewish Christian suggests his ability to interpret the words and actions of Jesus in light of OT messianic expectations.

The precise date of the writing of Matthew’s Gospel is not known. Some scholars argue for a date later than the destruction of Jerusalem in A.D. 70, since Jesus alludes to this event in Matthew 24:1–28. Of course, such a conclusion is warranted only if one denies Jesus’ ability to predict the future. In light of Irenaeus’s assertion (c. A.D. 175) that Matthew composed his Gospel while Peter and Paul were still living (Irenaeus, Against Heresies 3.1.1), it is traditionally dated to the late 50s or early 60s. 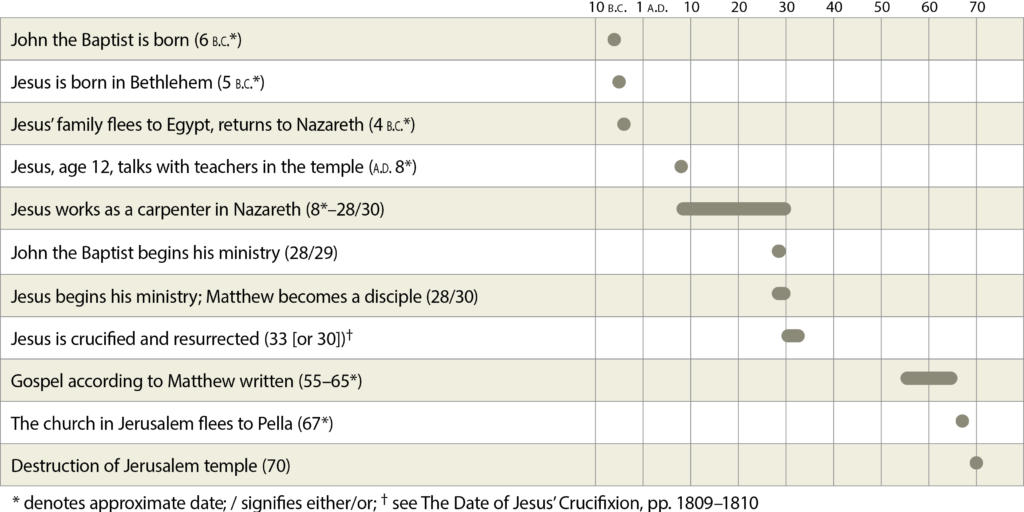 The primary genre of Matthew is the Gospel, and the organizing framework of all four Gospels is narrative or story. However, with the narrative framework of Matthew’s Gospel, a major amount of space is devoted to Jesus’ discourses. Beyond that, the usual array of subtypes are found: birth stories, calling or vocation stories, miracle stories, parables, pronouncement stories, encounter stories, passion stories, and resurrection stories.

The most notable literary feature of the book’s format is the alternating pattern around which the book is organized. The material in Matthew’s Gospel is based on a rhythmic, back-and-forth movement between blocks of narrative material and blocks of discourse material. There are five passages of discourse, which can be viewed as corresponding to the five digits on the human hand and can be easily remembered if one lists the questions that Jesus in effect answers in each unit:

Matthew’s distinguishing stylistic features include recurrent quotation and citation from the OT and an emphasis on Jesus as being kingly or royal (even the opening genealogy places Jesus’ father Joseph in the Davidic line). Additionally, Matthew is fond of the term “Son of David” as a title for Christ, statements to the effect that “this was done that it might be fulfilled as the prophets had said,” and the formula “the kingdom of heaven is like . . .”

Many scholars have suggested that the prominent church in Antioch of Syria, whose members included both Jewish and Gentile Christians (cf. Acts 11:19–26; 13:1–3), was the intended audience of Matthew’s Gospel. They point to the Gospel’s influence on Ignatius, an early bishop of Antioch. At the same time, Matthew’s message spoke to all of the fledgling churches of his day, and the Gospel appears to have circulated rapidly and widely. 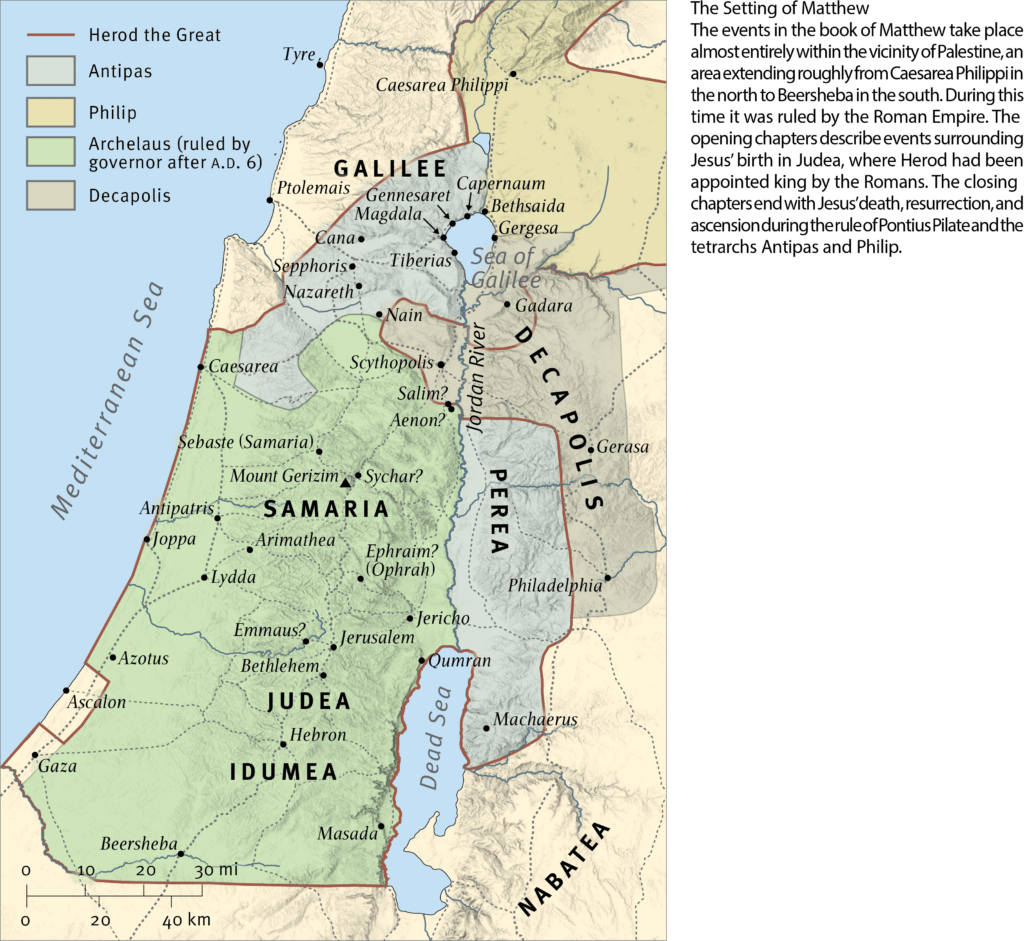 This is the story of Jesus of Nazareth, recorded by the apostle Matthew as a compelling witness that Jesus is the long-anticipated Messiah, who brought the kingdom of God to earth and is the prophesied fulfillment of God’s promise of true peace and deliverance for both Jew and Gentile.

Matthew crafted his account to demonstrate Jesus’ messianic identity, his inheritance of the Davidic kingship over Israel, and his fulfillment of the promise made to his ancestor Abraham (Matt. 1:1) to be a blessing to all the nations (Gen. 12:1–3). Thus in large part Matthew’s Gospel is an evangelistic tool aimed at his fellow Jews, persuading them to recognize Jesus as their long-awaited Messiah. At the same time, the Gospel reveals clearly to Gentiles that salvation through Jesus the Messiah is available to all nations. For Jewish Christians, Matthew’s Gospel provides encouragement to stand steadfast amid opposition from their own countrymen, as well as Gentile pagans, secure in the knowledge of their citizenship in God’s kingdom.

Against the backdrop of such opposition to Jesus’ message, Matthew establishes the identity of Christ’s church as the true people of God, who now find their unity in service to Jesus despite previous racial, class, and religious barriers. His Gospel provides necessary instruction for all future disciples, Jew and Gentile, who form a new community centered upon devotion and obedience to Jesus the Messiah amid significant opposition.