Discover the Basics of the Book of Malachi

This introductory course is designed to provide key insights into the book of Malachi by pulling together a number of key resources: overview videos from The Bible Project, helpful contextual information from The ESV Study Bible, commentary recommendations from The Gospel Coalition, a single sermon that sums up the book from beginning to end by Mark Dever, and much more. By watching, listening to, and reading these resources, you’ll be better prepared to read, study, teach, or preach the book of Malachi.

The Hebrew name “Malachi” means “my messenger,” or perhaps “messenger of (the Lord)” if “Malachi” is a shortened form of “Malachiah” (2 Esd. 1:40). Based on the lxx and Targum Jonathan, some scholars have argued that “Malachi” in Malachi 1:1 ought to be understood as a title, “my messenger,” rather than as a proper name. It appears more likely, however, that “Malachi” is a proper name, as it is interpreted by many other ancient sources (2 Esd. 1:40, the Gk. translations by Symmachus and Theodotion, the Syriac Peshitta translation, etc.). If so, the book of Malachi follows the pattern of 14 other prophetic books in the Hebrew Bible (Isaiah, Jeremiah, Ezekiel, and the other 11 Minor Prophets), where the author is introduced by name in the opening verses using language similar to Malachi 1:1. Accordingly, Malachi 3:1 offers an important wordplay on the prophet’s name: “Behold, I send my messenger, and he will prepare the way before me.” This wordplay suggests that Malachi’s own ministry was intended to foreshadow that of the coming messenger, who is identified in the NT as John the Baptist (see ESV Study Bible notes on Mal. 3:1 and Mal. 4:4–6).

The content of the book of Malachi places it in the category of prophecy, but the form in which that content is packaged is out of the norm for OT prophecy. The book is written entirely in prose. Further, the material is not embodied in the conventional format of oracles of judgment and salvation. The dominant genre is satire—an attack on vice in a discernible literary form, and with a satiric norm by which the criticism is conducted. The object of attack is halfhearted and negligent religious service, which in the prophet’s day took multiple forms (e.g., inappropriate offerings, untruth promoted by the priests, and the prevalence of divorce). The satiric norm is God’s law. The primary vehicle in which the satire is embodied is a rhetoric of question and answer, as the people of Judah are pictured as asking a series of questions that God answers in an accusatory and condemning way.

One of the organizing patterns is an accumulating litany of attitudes and actions that are offensive to God. Another is an expanding portrait of the coming Messiah and the blessings that he will bring. Finally, a common repeated pattern is as follows: (1) God voices an indictment of his people for bad behavior; (2) the people are pictured as asking God how his charge is true; (3) God replies to the question, in the process of which he expands the charge. God’s indictments are sometimes phrased as rhetorical questions (e.g., Mal. 1:6 and Mal. 1:8; Mal. 2:10 and Mal. 2:15).

Malachi’s contemporaries may have been free from blatant idolatry (though see Mal. 2:11) and relatively orthodox in their beliefs, but theirs had become a dead orthodoxy. They were all too ready to make ethical compromises and to dilute the strenuous demands of proper worship. In response to the cynicism and religious malaise of his contemporaries, Malachi’s prophecy comes as a wake-up call to renewed covenant fidelity (see diagram, below). 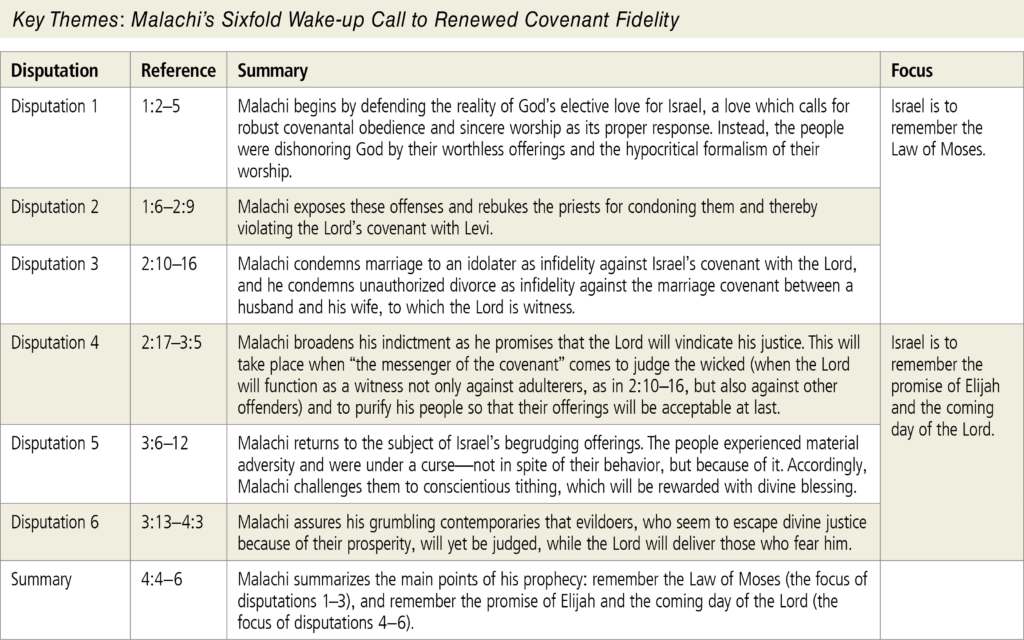 Malachi’s ministry took place nearly a hundred years after the decree of Cyrus in 538 B.C., which ended the Babylonian captivity and allowed the Jews to return to their homeland and rebuild the temple (2 Chron. 36:23). This was some 80 years after Haggai and Zechariah encouraged the rebuilding of that temple with promises of God’s blessing, the engrafting of the nations, prosperity, expansion, peace, and the return of God’s own glorious presence (cf. Haggai 2; Zech. 1:16–17; 2:1–13; 8:1–9:17). To Malachi’s disillusioned contemporaries, these predictions must have seemed a cruel mockery. In contrast to the glowing promises, the harsh reality was one of economic privation, prolonged drought, crop failure, and pestilence (Mal. 3:10ff.).

After the return from exile, Judah remained an almost insignificant territory of about 20 by 30 miles (32 by 48 km), inhabited by a population of perhaps 150,000. Although they enjoyed the benefits of Persia’s enlightened policy of religious toleration and limited self-rule, the Jews acutely felt their subjugation to a foreign power (Neh. 1:3; 9:36ff.), and they suffered persistent opposition from their neighbors (Ezra 4:23; Dan. 9:25). Judah was no longer an independent nation and was no longer ruled by a Davidic king.

Worst of all, in spite of the promises of the coming Messiah and God’s own glorious presence (e.g., Zech. 1:16ff.; 2:4, 10–13; 8:3–17, 23; 9:9–13), Israel experienced only spiritual destitution. Unlike Bible books from earlier periods, the postexilic books of Ezra, Nehemiah, and Esther are remarkably candid in their description of Judah as generally lacking miraculous evidences of God’s presence. In contrast to both Solomon’s temple and the prophetic promise of the restored temple (Ezekiel 40–43), the actual postexilic temple was physically and spiritually inferior. As Malachi 3:1 implies, the Most Holy Place in this second temple had no visible manifestation of the glory of God. Though God was certainly alive and well (as revealed, e.g., by his remarkable providences in the book of Esther), it was a period in which God’s people had to live more by faith than by sight.

Even though God has disciplined his people severely by means of the exile, he still intends for his name to be honored among the Gentiles (Mal. 1:11, 14). God’s chosen vehicle for bringing his name to the Gentiles is his people loving him faithfully. This is therefore the time for Israel to renew its commitment to the covenant.

The book also has an unobtrusive concentric (chiasmic) structure. One conspicuous literary indicator of this pattern is the double introductory assertion (“But you say”) and the anticipated response, which are found only in the parallel second (Mal. 1:6–2:9) and fifth (Mal. 3:6–12) disputations (the “B” sections below).

A.    First disputation: Does God make a distinction between the good and the arrogantly wicked? God’s elective love vindicated in his judgment (Mal. 1:2–5)

C.    Third disputation: Marriage to an idolater—and divorce based on aversion—condemned by the Lord, who is witness to the covenant of marriage (Mal. 2:10–16)

A’.    Sixth disputation: Does God make a distinction between the good and the arrogantly wicked? God’s elective love vindicated in his judgment (Mal. 3:13–4:3)