Discover the Basics of the Book of Joel

This introductory course is designed to provide key insights into the book of Joel by pulling together a number of key resources: overview videos from The Bible Project, helpful contextual information from The ESV Study Bible, commentary recommendations from The Gospel Coalition, a single sermon that sums up the book from beginning to end by Mark Dever, and much more. By watching, listening to, and reading these resources, you’ll be better prepared to read, study, teach, or preach the book of Joel.

Estimates for dating the book of Joel range from the ninth to the fourth centuries B.C. While no consensus has been reached, most scholars hold to a date after the exile (586 B.C.) for the following reasons:

As a work of prophecy, the book of Joel relies on the staples of the oracle of judgment and the oracle of salvation. Poetry counts for a lot in the book of Joel, whose author is particularly adept at description. By the time Joel’s imagination amplifies the killer locusts into more-than-literal creatures, the book of Joel emerges as almost a horror story. The technique of apostrophe (direct address to entities that are literally absent but treated as though they can hear and respond) is prominent in the first two chapters. Even though the writer is a prophet rather than a nature writer, there are so many pictures of nature in the book that it does rank as nature writing, in a prophetic mode.

The most striking literary feature of the book is the way in which Joel’s imagination amplifies literal locusts into images of apocalyptic horror—pictures of God’s judgment against human sinfulness. Of course Joel’s images are a timeless and universal picture of punishment from God for human evil. 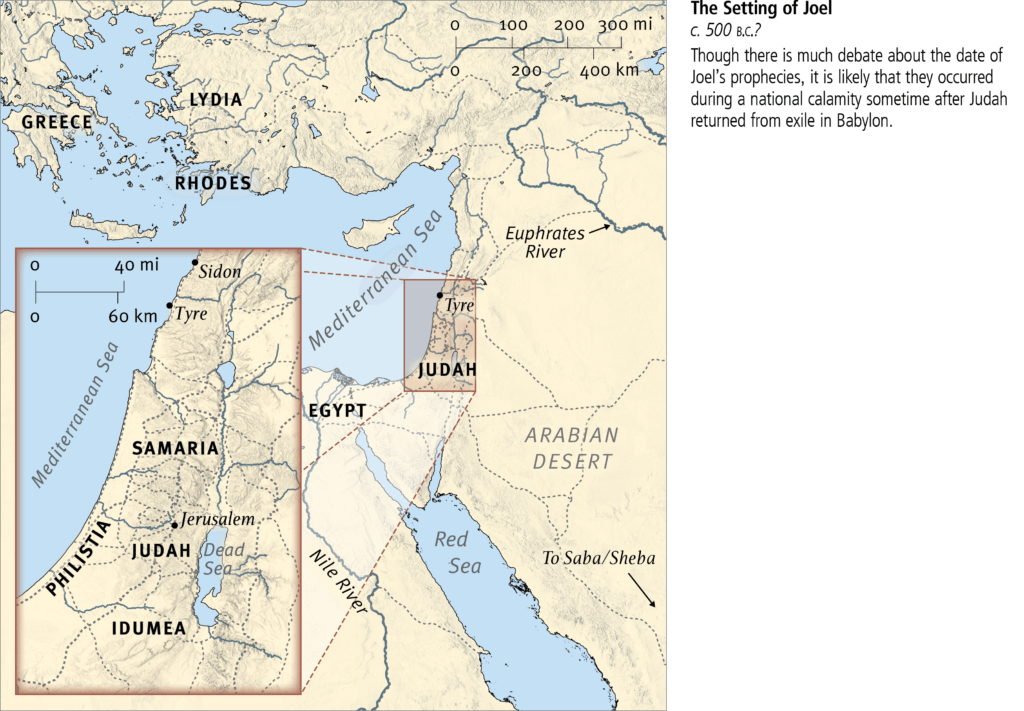 The relationship between the locust plague and drought (Joel 1:1–20) and the onslaught of the Lord’s army (Joel 2:1–11) provides a major challenge to readers. Scholars provide a number of options, as outlined in the chart below. While there are serious arguments for each of those options, the third fits best with the overall context. Joel uses the imagery of a dramatic locust plague along with military imagery (Joel 2:4–9) to describe the coming of the Lord’s army on his great day (Joel 2:11). The verbs of chapter 1 are predominantly imperative and past-tense forms, calling the people to act based on past events. The verbs in chapter 2 are in the imperfect and imperative forms, highlighting the fact that, though the judgment is approaching, a return to God is still possible. The lament of Joel 1:15–20 is clearly concerned with the effects of the locusts, while the prayer of Joel 2:17 focuses not upon the destruction of locusts but rather upon the depressed social status of the people of God threatened by foreign rule. Reference to the “northerner” is a typical OT description of enemies (see ESV Study Bible note on Joel 2:20) but an unusual label if referring to a swarm of locusts. The judgment of the nations in Joel 3:1–21 makes better sense contextually if chapter 2 portrays the threat of an army and a decisive conflict. These and other reasons support option 3.

2. Repentance. If the whole community would cry out to the Lord (Joel 1:13–20) and look to him—not merely with external actions but in sincerity with their whole persons (Joel 2:12–13)—then judgment may be averted. However, the Lord is not bound by the acts of the community (Joel 2:14); it is his prerogative to send or withhold the destruction by the locusts (Joel 1:15), just as the army is his to command (Joel 2:11).

Joel calls all the inhabitants of Judah and Jeru­salem to lament and return to the Lord during a time of national calamity. This crisis is precipitated in the first instance by a locust plague that has destroyed both wine (Joel 1:5, 7, 12) and grain (Joel 1:10) and therefore threatens the ability of the people of God to present offerings in the temple (Joel 1:9, 13, 16). Given this background, Joel may have served as a lament in the ongoing life of God’s people during other times of national tragedy.

God called his ancient people in love and mercy, he preserved them to be the vehicle through which he poured out his Spirit on all kinds of people (Joel 2:28–32), and he will preserve them against all who seek to destroy them (ch. 3). In all of his care for them, he aims for “torn” hearts, and not just torn garments, from his people (Joel 2:12–14), that they might love him with their whole hearts.