Discover the Basics of the Book of Romans

This introductory course is designed to provide key insights into the book of Romans by pulling together a number of key resources: overview videos from The Bible Project, helpful contextual information from The ESV Study Bible, commentary recommendations from The Gospel Coalition, a single sermon that sums up the book from beginning to end by Mark Dever, and much more. By watching, listening to, and reading these resources, you’ll be better prepared to read, study, teach, or preach the book of Romans.

As the opening words of the letter indicate, the apostle Paul wrote the book of Romans. Only a few scholars in history have doubted his authorship, and their doubts have been shown to be groundless. The title of the book indicates that the letter was written to the Christian churches in Rome.

Paul probably wrote Romans from Corinth, on his third missionary journey, in A.D. 57 (Acts 20:2–3). Having completed his work in the eastern part of the Roman Empire, he hoped to travel to Rome and then on to Spain; but first he needed to go to Jerusalem to deliver the money he had collected for the church there (Rom. 15:19–32; see Acts 19:21). Paul commends Phoebe (Rom. 16:1–2), and she was likely the person who brought the letter to Rome. She resided in Cenchreae, which was near Corinth and was one of its port cities. Furthermore, Gaius was Paul’s host (Rom. 16:23), and this is likely the same Gaius who lived in Corinth (1 Cor. 1:14). Finally, two fairly early manuscripts of Romans have subscriptions (brief notes that a copyist added to the end of a document) which say that the letter was written from Corinth. 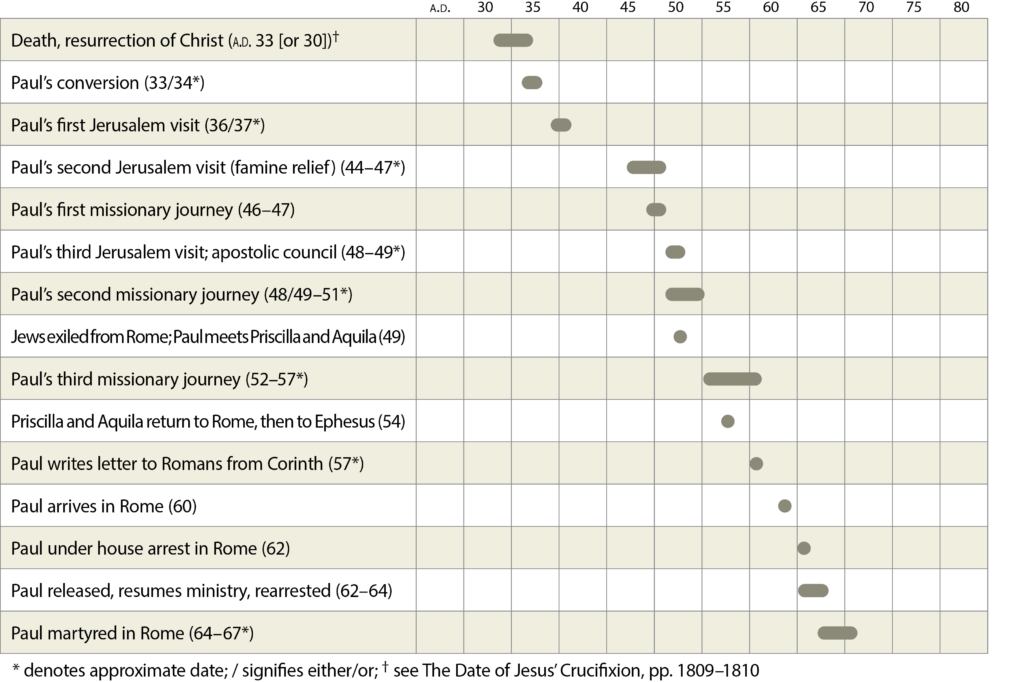 Romans contains all of the standard features of a biblical epistle, including the salutation, thanksgiving, body, paraenesis (list of moral exhortations), personal greetings, and benediction. What distinguishes the letter is its long and carefully constructed body, which presents a sustained theological argument. Romans is perhaps the most tightly organized of all the NT letters, which helps explain why it reads as much like a theological treatise as it does a letter. Understanding Romans thus demands careful attention to the details of its doctrine.

As a theological treatise, the book of Romans is a grand edifice. It is filled with lofty theological ideas and vocabulary. The rhetoric is often grand, taking such forms as elaborate sentence construction (syntax) and patterns of verbal repetition. What is often overlooked is that there is a continuous presence of a genre that tends toward the informal and that even lends a colloquial vigor that balances its grandeur. This genre, known as the diatribe, was used extensively by Roman teachers and orators (also known as preachers). The traits of the form included the following: dialogue with hypothetical questioners or opponents; as part of that, question-and-answer constructions, sometimes catechism-like in effect; use of questions or hypothetical objections as a transition to the next topic; rhetorical questions; adducing famous and representative figures from the past as examples; use of analogy as a rhetorical device; and aphoristic style.

The book is unified primarily by the coherence of its central argument, which outlines and explains the eternal plan of God for the salvation of sinners. The book’s thesis statement (see Rom. 1:16–17) alerts the reader to the central place that the righteousness of God occupies in this plan—the righteousness that God both demands in obedience and offers as a free gift in Christ, received by faith.

Archaeological evidence in Rome confirms monumental structures that stood during the time of Paul, such as the Circus Maximus, Tabularium (state archives), theaters (including those of Pompey and of Marcellus), and multiple forums. Later, in the third century A.D., the Umbilicus Romae stood in the center of the city, and this cylindrical monument marked the theoretical “center” of the Roman world (likely this way of thinking about Rome’s place in the world stemmed from well before the NT period). The prestige of the early emperors was memorialized during Paul’s day in their basilicas, arches, and forums (e.g., the Forums of Caesar and of Augustus), in the Altar of Peace, in the Mausoleum of Augustus, in porticoes and images honoring their extended imperial family, and in imperial cult temples (such as the temple of Julius Caesar from 29 B.C. and the temple of Claudius). Innumerable pagan gods received worship in Rome. Especially impressive temples were dedicated to such ancient gods/goddesses as Mars, Saturn, Castor and Pollux, Vesta, Venus and Roma, Apollo, and Jupiter. Indeed, devotion to all the great Roman gods was offered in the monumental domed Pantheon, which stands in Rome to this day. (An earlier Pantheon—depicted in the illustration—was built in 27 B.C. and destroyed by fire in A.D. 80. The present-day structure was built c. A.D. 120.) 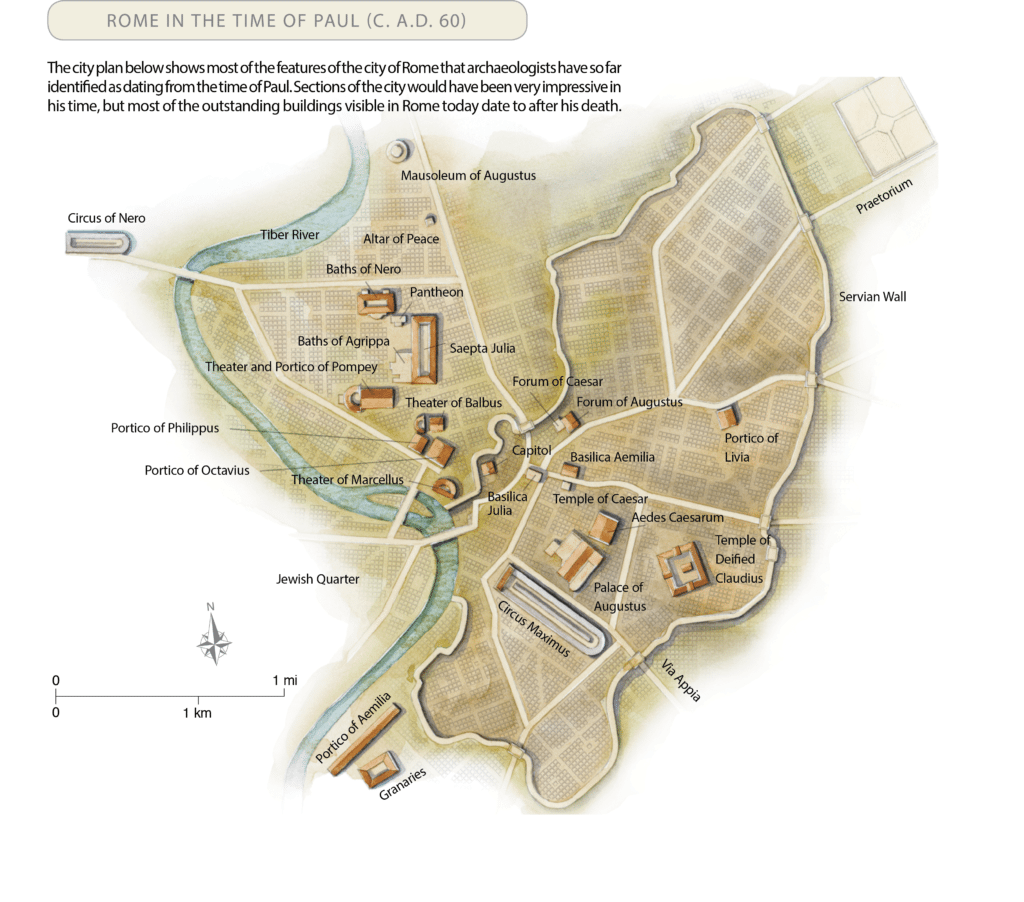 A significant portion of the city was destroyed by fire during Nero’s rule in A.D. 64. Nero, who was suspected of having started the blaze, blamed and persecuted Christians for the conflagration. The fire allowed Nero to design and construct his own monumental buildings, including his 200-acre imperial dwelling, the Domus Aurea (“Golden House”).

Among the structures that are contemporary with the last books in the NT canon, one should especially note the Arch of Titus and the Colosseum. The Arch of Titus, built in A.D. 81 by the emperor Domitian (reigned 81–96), commemorates the capture and destruction of Jerusalem and its temple in A.D. 70. The two generals who reconquered Palestine received such fame from this war that they both attained imperial rule, which went first to Vespasian (A.D. 69–79) and then to his son Titus (79–81). The Arch of Titus still manifests a relief portraying the captured temple menorah and other Jewish sacred objects being carried through Rome in processional tribute to Titus. Vespasian and Titus built the Flavian Amphitheater, better known as the Colosseum due to its proximity to a gigantic statue (Gk. kolossos) of Nero. The Colosseum is estimated to have seated more than 45,000 for gladiatorial spectacles.

Daily life in Rome could be luxurious for the wealthy but onerous for others. Multiple aqueducts and a huge sewer system provided for the immense water requirements of Rome, including the many bathhouses, fountains, and latrines. Food had to be imported to satisfy the needs of this thriving metropolis, and the emperor often directly oversaw the vital grain supply. Luxury villas in Rome were the privileged possessions of the wealthiest families (often of senatorial or equestrian rank) and especially of the emperors, but most of the housing in ancient Rome consisted of insulae (multistory apartment buildings often constructed above first-floor shops). Contemporary authors spoke of a severely overcrowded, loud, and smelly city—a place that provided every virtue and vice known to mankind. The residents of Rome were mostly pagan, although a sizable Jewish population also existed (as evidenced both by 1st-century literature and by later remains of inscriptions). The expulsion of the Jews under the emperor Claudius (A.D. 49) was a limited measure.

Today, churches in Rome built during the fourth- to fifth-century Byzantine period mark the traditional burial places of Paul and of Peter, reflecting the post-NT church tradition which claims that Paul and Peter died as martyrs in Rome during the reign of Nero (c. A.D. 64–65, perhaps after an incarceration in the Mamertine Prison). The Roman catacombs house early Christian burials (from the 2nd century A.D. and after), and these catacombs contain some inscriptions and graffiti testifying to Christian martyrdom prior to the legitimization of Christianity by Licinius and Constantine (by the Edict of Milan in A.D. 313).

The theme of Romans is the revelation of God’s judging and saving righteousness in the gospel of Jesus Christ. In the cross of Christ, God judges sin and yet at the same time manifests his saving mercy.

It is more likely that Paul wrote the letter to address particular issues of concern to the Roman church. Specifically, he addressed matters of interest for a church that included both Jewish and Gentile Christians:

The focus on Jew-Gentile issues suggests that tensions existed between Jews and Gentiles in the church in Rome. The Roman church probably began as a Jewish church, though it is not known exactly when it was established. Perhaps Jews from Rome returned from Jerusalem after Pentecost (Acts 2:10) and founded the church, or perhaps the church was established later. Some have suggested that Peter founded the church in Rome, but no significant evidence supports this premise.

As time passed, of course, Gentiles in Rome also became Christians. The Roman historian Suetonius records that the Roman emperor Claudius (reigned A.D. 41–54) expelled Jews from Rome in A.D. 49 because of strife over “Chrestus.” Suetonius likely misunderstood the name, so that the dispute probably was about “Christus” (Latin for Christ). The expulsion of Jews from Rome is confirmed by Acts 18:2. Because of the expulsion, the Gentile churches would have developed for a number of years apart from the Jews. Over the years the Jewish Christians slowly filtered back into Roman churches. It is not difficult to imagine that tensions would develop between law-observing Jewish Christians and Gentile Christians who lived free of the restrictions in the Mosaic law. It seems, however, that the church was made up mainly of Gentile Christians (see Rom. 1:5–6, 13; 11:13; 15:15–16).

A closer look at Romans reveals another purpose as well. Paul wanted the Christians in Rome to rally around his gospel so that Rome would become the base of operations by which he could proclaim the gospel in Spain (Rom. 15:22–24). If Roman Christians did not agree with Paul’s gospel message, especially on the issues being debated among Jews and Gentiles, then they would not support his proposed mission to Spain. Paul needed to explain the gospel in some detail so that the Christians in Rome would become the base from which he could proclaim the gospel in new regions.

Of course, the ultimate aim and purpose for the preaching of the gospel is the glory of God. Paul longs for the Gentiles to come to the obedience of faith for the sake of Christ’s name (Rom. 1:5). God has planned all of salvation history to bring glory and praise to his name (Rom. 11:33–36).

God’s OT promises of salvation are fulfilled in the gospel of the death and resurrection of Jesus Christ, and of new life received through faith in him. The gospel goes to both Jew and Gentile, fulfilling God’s plan to bless the nations (Gen. 12:3).