Discover the Basics of the Book of Hosea

This introductory course is designed to provide key insights into the book of Hosea by pulling together a number of key resources: overview videos from The Bible Project, helpful contextual information from The ESV Study Bible, commentary recommendations from The Gospel Coalition, a single sermon that sums up the book from beginning to end by Mark Dever, and much more. By watching, listening to, and reading these resources, you’ll be better prepared to read, study, teach, or preach the book of Hosea.

The opening verse, “The word of the Lord that came to Hosea, the son of Beeri,” identifies Hosea with other OT prophets and follows the same general pattern of naming the book after its author (cf. Joel 1:1; Jonah 1:1; Mic. 1:1; Zeph. 1:1; Mal. 1:1). Beeri is a Hittite name in Genesis 26:34, perhaps demonstrating the practice, as today, of naming children from the Scriptures. Because chapters 1–3 of Hosea are quite different from chapters 4–14, Hosea’s authorship of the whole book has been questioned. But this is unnecessary. The latter section expands and applies the essential message of God’s mercy for his people; the preceding biographical sketch enhances that message, though it employs different literary forms.

The OT prophets commonly dated their ministries in conjunction with reigning kings. In Hosea’s day the Judean kings were Uzziah, Jotham, Ahaz, and Hezekiah. The king of Israel (the northern kingdom, also called “Ephraim” in Hosea; see ESV Study Bible note on 4:17) was Jeroboam, son of Joash. Jeroboam’s last year was 753 B.C., and Hezekiah’s was 687, so Hosea’s ministry was situated in this time period. The prophet’s ministry was probably not that long (66 years), though a 35-year ministry is possible. The significant feature is that he ministered during the latter half of the eighth century. This period was the most turbulent and trying time in the history of Israel prior to the captivity.

The overall genre of the book is prophecy, and most of the book consists of oracles of judgment, with only a few interspersed oracles of salvation. Its main literary form is satire (in this case, sharp and bitter). Virtually the entire book is embodied in poetry. The overall format is that of a legal or judicial indictment, as God presents a detailed case against his covenant people.

The vividness of the poetry and figurative language is a striking feature of the book, as God’s people, e.g., are pictured as an oven or a stubborn heifer or wild grapes. Even though the failed and restored marriage of Hosea and Gomer is present only in the first three chapters, the controlling metaphor of covenant Israel as an unfaithful wife exerts an implied presence throughout the book. The multiple lists of indictments that God brings against Israel also make the implied metaphor of a divine lawsuit a continuous presence. Recurrent themes include: (1) the unfolding list of acts and attitudes that disappoint God; (2) a picture of what people who reject God can expect to receive from him; and (3) evidences of God’s love and grace toward people who do not deserve them. 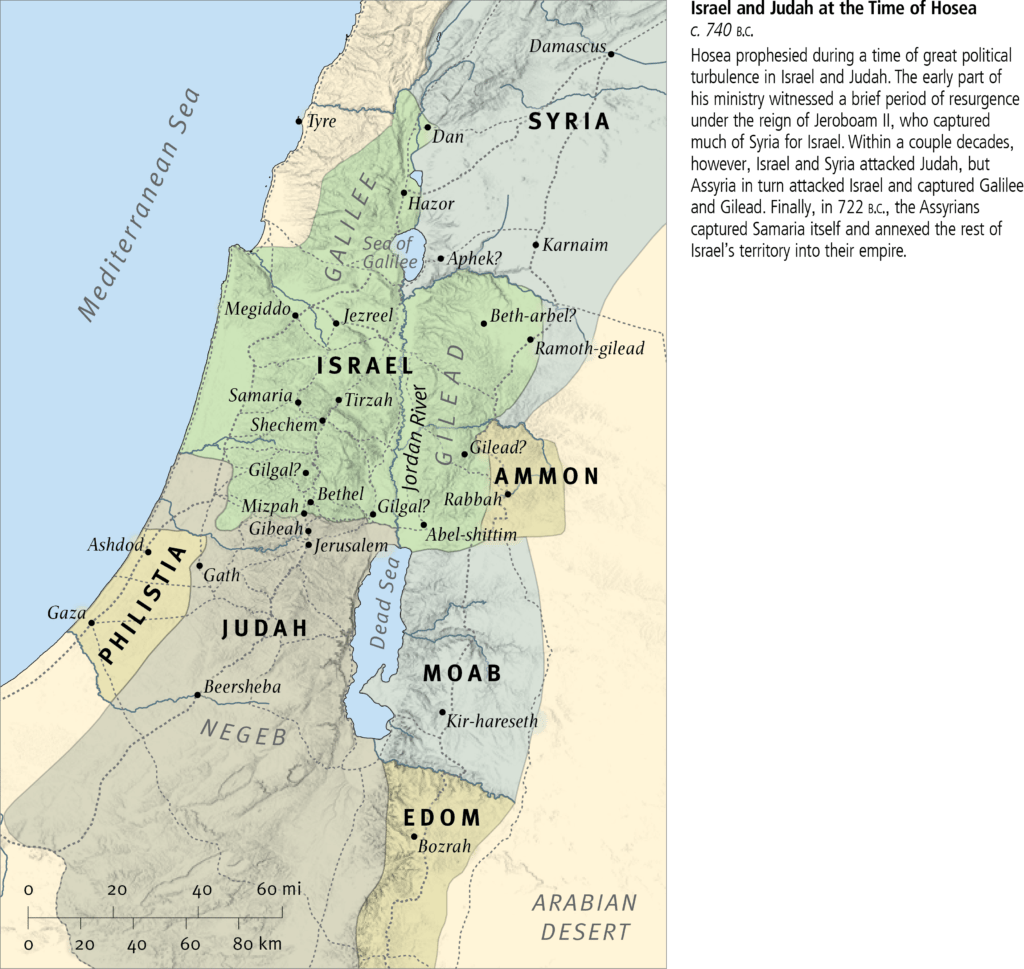 Hosea depicts Israel’s unfaithfulness with a number of images from family and nature. Israel is like: a promiscuous wife, an indifferent mother, an illegitimate child, an ungrateful son, a stubborn heifer, a silly dove, a luxuriant vine, and grapes in the wilderness. Yet Israel’s unfaithfulness and obstinacy are not enough to exhaust God’s redeeming love that outstrips the human capacity to comprehend.

The purpose, occasion, and background of Hosea all work in tandem. They pertain to the latter half of the eighth century B.C., certain aspects of Baalism, and the ideology of the prophet Hosea.

The latter days of the eighth century B.C. witnessed the rise of the neo-Assyrian king Tiglath-pileser III (745–727). He was followed by several capable kings who extended Assyrian dominance over the entire ancient Near East (eventually including Egypt) for more than a century. Partic­ularly relevant to Hosea were at least six incursions into Palestine and its neighbors by an unstoppable Assyrian army during the prophet’s lifetime. Conquest and exile were the most dreaded fate in biblical times. This perennial threat hanging over Israel (specifically the northern kingdom) came with a time of unparalleled political upheaval and instability. The nation had six kings within about 30 years, a period filled with intrigue and violence. Zechariah (753 B.C.) was murdered after only six months in power. The usurper, Shallum, was assassinated one month later. The next king, Menahem (752–742 B.C.) survived for a decade only by paying a burdensome tribute to Tiglath-pileser. His son, Pekahiah (742–740 B.C.), was assassinated by an army officer, Pekah (740–732), after only two years’ reign. Subsequently, Pekah was disposed of by Hoshea, whose rebellion against the Assyrians led to the end of the northern kingdom (732–722 B.C.).

Within this chaotic 30-year period, external conflicts and failures of international diplomacy repeatedly proved disastrous. These times are reflected in Hosea, whose primary audience was Ephraim (the northern kingdom, Israel), mentioned 35 times in the book. As Hosea reflects these times, it is often difficult to be sure just what specific historical reference he has in mind. Although there is a range of suggestions regarding different passages, most lack consensus. The prophet’s messages, however, are not tarnished by the reader’s inability to tie down all of the details. His priority was to see Israel turn back to God.

Hosea’s major concern was the worship of Baal—an apostasy that he understood to be the reason for Israel’s dilemma. Baal was the weather-god worshiped in Syria-Palestine, who had control over agriculture and fertility, rainfall and productivity. Since ancient Israel was always an agricultural society, Baal worship was of unrivaled importance. Baal was localized at different shrines identified by such names as Baal-peor (Hos. 9:10) and Baal-gad ( Josh. 11:17) and hence was sometimes referred to as the Baals ( Judg. 2:11; 3:7; 8:33). While a full description of this religion is not possible here, one major aspect of Baalism touches on this prophet’s message: the religion’s appeal to human sexuality (cf. Isa. 57:3–10). Other aspects—such as drunkenness, bestiality, human sacrifice, mutilations, and incest—may be discerned in the book, but Hosea understands the strength of Baalism’s appeal to the sex drive by way of ritual prostitution.

This amounted to sexual intimacy at one of the pagan shrines, understood most probably as an act of imitative magic. That is, sexual behavior at these shrines was expected to cause the Baals to respond in like manner—to follow the worshipers by producing for them fertile seed and rain for a good crop. This intimacy took place with cult prostitutes (Hos. 4:14). When a worshiper selected a prostitute, he prayed, “I beseech the goddess of Astarte to favor you and Baal to favor me.” There was also eating and drinking at shrines as an act of worship.

Hosea’s approach is dominated by his knowledge that God’s people have been joined to the Lord. Hosea makes a number of references to Israel’s past to remind them of that. Israel is the Lord’s bride, but Israel has instead become joined to the Baals. Worship of Baal is not just a violation of the first of the Ten Commandments (Ex. 20:3), it is a betrayal of that intimate and endearing union that God made with his people. Idolatry, therefore, is depicted as spiritual adultery, transgression against the marriage between the Lord and Israel (cf. Ex. 34:11–16; Lev. 17:7; 20:4–6; Deut. 31:16). The prophet justifies the Lord’s coming judgments with a litany of offenses that amount to the radical ingratitude of a wayward wife. But punishment is not ultimately what the Lord wants for his people; he desires that they leave their fornication and return to the One who first loved them and can indeed provide what is for their best.

The Lord has yoked himself to Israel and will not give up on her, even in the face of the rampant unfaithfulness of the northern kingdom. He must purify Israel from her unfaithfulness through terrible punishments. For the northern kingdom to return to the Lord, the people must return to the house of David (Hos. 3:5), which they will do in the “latter days” (the time of the Messiah).

The book of Hosea does not lend itself easily to an outline, except in the broadest way. Chapters 1–3 use Hosea’s own marriage as a parable for the relationship between God and Israel—with the dominant image of Israel as an unfaithful wife. Then chapters 4–14 spell out the details of the parable, with its series of accusations, warnings, appeals, and enticements for God’s people to return. These occur in a maze of various literary forms that do not lend themselves to simple categories.