Discover the Basics of the Book of Amos

This introductory course is designed to provide key insights into the book of Amos by pulling together a number of key resources: overview videos from The Bible Project, helpful contextual information from The ESV Study Bible, commentary recommendations from The Gospel Coalition, a single sermon that sums up the book from beginning to end by Mark Dever, and much more. By watching, listening to, and reading these resources, you’ll be better prepared to read, study, teach, or preach the book of Amos.

The first verse of the book identifies it as the work of Amos, one of “the shepherds of Tekoa.” Nothing else is known about Amos apart from what he says about himself in Amos 7:14–15. There Amos insists that he is not a prophet by profession, but a “herdsman and a dresser of sycamore figs” whom God entrusted with the special task of carrying a divine message to the people of the northern kingdom.

The first verse of the book also identifies the time period when Amos spoke. It is said to have been during the reigns of “Uzziah king of Judah and . . . Jeroboam . . . king of Israel.” Since these were both long reigns, a lengthy time frame emerges when the book could have been written. Jeroboam II began to reign over Israel in 793 B.C., and Uzziah died in 739. Many scholars suggest a date roughly in the middle of the period, about 760 B.C., but there is no conclusive evidence to say that it could not have been earlier or later. One bit of circumstantial evidence is found in Amos 7:17, where Amos seems to predict that the priest Amaziah will be taken into exile and die there. Since Amaziah must have been at least 30 years old to be a practicing priest (if Num. 4:3 was observed in the north), and since the exile of the northern kingdom occurred in 722 B.C., this would suggest a date for this encounter nearer the end of the period 793–739 than the beginning.

The umbrella under which everything in Amos fits is prophecy, with its attendant oracles of judgment and a concluding oracle of redemption. But the dominant literary form is satire, with the usual elements of objects of attack, a satiric vehicle (very multiple in this book, such as catalogs of “woe” formulas and brief vignettes of bad behavior), a satiric norm or standard by which the criticism is conducted, and a prevailing satiric tone (in this case, biting and sarcastic). In addition to these big literary forms, Amos is a master of smaller forms such as metaphor and simile, epithet (“you cows of Bashan,” Amos 4:1), parallelism, rhetorical questions, and parody (in which a conventional literary or rhetorical form such as the priestly call to worship [Amos 4:4] is echoed with new or inverted effect from its usual meaning). Other genres that find a place in the book include saying or proverb, doom song, woe formula, and visionary writing.

Amos characterizes himself as the plainspoken satirist (Amos 7:14–15), but he is in fact a master of literary technique and rhetoric, seen especially in his management of small units of discourse. The effect is that of a literary collage in which the author dazzles with his imaginative energy and inventiveness and uses the techniques of satire to subject readers to shock treatment with regard to their complicity with evil, especially in its institutionalized forms. 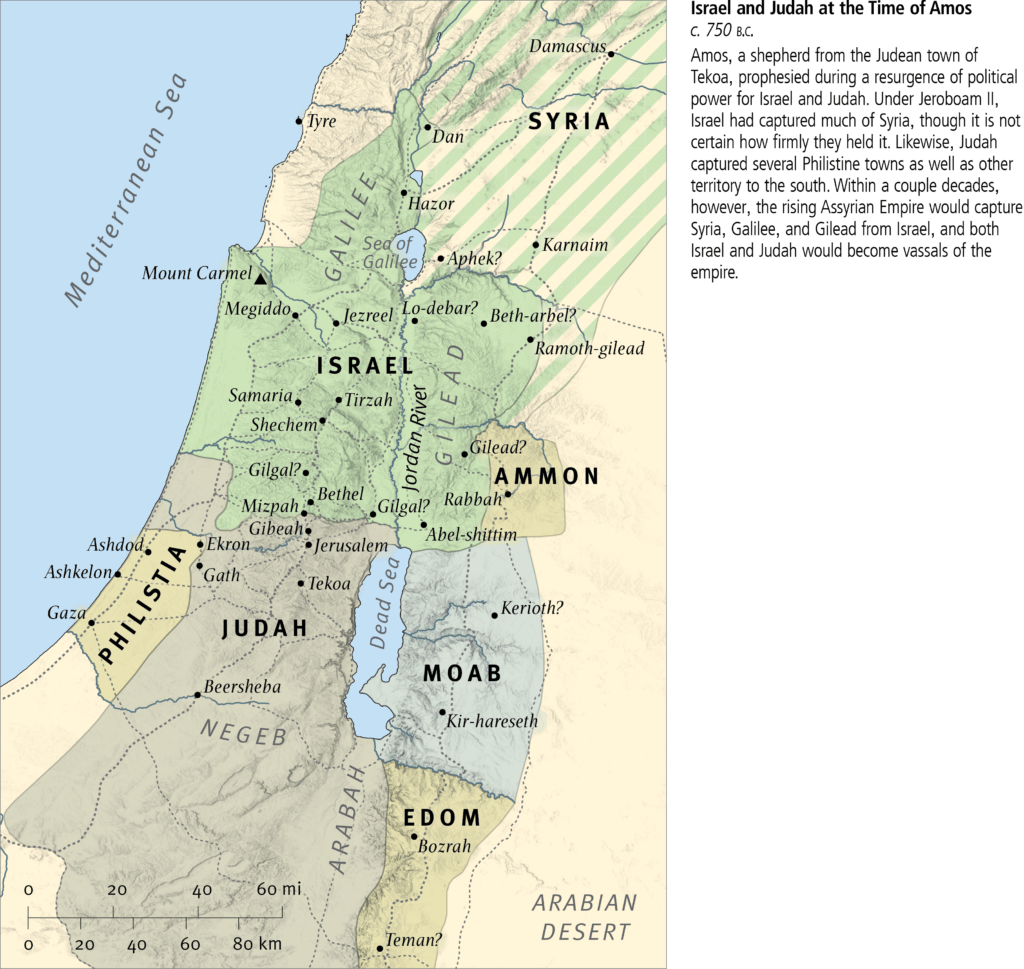 The theme of Amos is the universal justice of God. The Israelites clearly expected a “day of the Lord” when all their enemies would be judged (Amos 1:2–2:5). What they were not prepared for was that the judgment of that day would fall on them as well (Amos 2:6–9:10). Far from enjoying favored status, they would be held more accountable than their neighbors.

From c. 780–745 B.C. the Assyrian Empire was unable to continue the pressure it had put on the nations of the Canaanite coast during the previous century. At this same time, both Judah and Israel were blessed with fairly stable governments. As a result of these two factors, the two nations were experiencing a time of wealth and prosperity unparalleled since the day of Solomon. This was especially true for the northern kingdom, Israel. Judah tended to be more isolated from the world at large and possessed less arable land than did Israel. Thus, when opportunities for amassing wealth and the trappings of prosperity presented themselves, Israel was in a better position to capitalize on those opportunities.

As has tended to be true throughout history, the Israelites took this wealth and prosperity to be unmistakable signs of the blessing of God. Thus, they were reinforced in their belief that “the day of the Lord” would soon dawn in which God would subdue their enemies under their feet and make them the rulers of the world. But in fact, their present wealth and power was not evidence of the blessing of God. As Amos conclusively showed, they were actually under the curse of God because of their egregious breaches of their covenant with him. Much of their wealth had been amassed at the expense of the poor, whom the rich and powerful were systematically oppressing. Their worship of God was little more than attempts at magical manipulation of him, much like the religion of their pagan neighbors. It is no accident that Amos delivered his messages at Bethel, where Jeroboam’s namesake (Jeroboam I) had set up a golden calf for Israel to worship in 930 B.C. at the very outset of the northern kingdom.

Thus, what the Israelites saw as the beginning of a new “Golden Age” was really the last flush of a terminal illness. And it was Amos’s unhappy task to disabuse them of their foolish expectations. Not only was Israel not going to become ruler of the world, within just a few years they would not exist as a nation at all, and would continue to exist as a people only by the unmerited grace of God (Amos 9:11–15). “The day of the Lord,” far from being a day of light, was going to be a day of darkness.

As it turned out, Amos was profoundly correct. Though no human could have predicted it, God knew that Assyria was not entering its final decline but was only “catching its breath” before its explosion into its final century of greatness. In 745 B.C. Tiglath-pileser III would ascend the throne of Assyria, and hardly more than 20 years later, in 722, the northern kingdom of Israel would cease to exist.

God “knew” Israel (Amos 3:2) out of “all the families of the earth,” and instituted it to be a place where righteousness and justice, in both the private and public spheres, would be on display for all mankind. The northern kingdom of Israel had rejected that calling and abused that privilege, and so God would punish them all the more severely for their unfaithfulness. And yet even this terrible judgment did not eclipse all hope: there would still come an heir of David, in whom alone Israel and Judah, and indeed all the world, would find peace and blessing.

The first six chapters of Amos are composed of judgment oracles—oral messages from God through Amos to the people of Israel. Among these there seem to be two subgroups. The first is found in Amos 1:2–2:16. These are poetic sayings introduced by “Thus says the Lord” (Amos 1:3, 6, 9, 11, 13; 2:1, 4, 6). All of these except the last (Amos 2:6–16) are brief and are addressed to Israel’s neighbors, from Syria (Amos 1:3–5) to Judah (Amos 2:4–5). Each of them (with the exception of the one addressed to Judah) deals with cruelty and oppression—basic sins against humanity. Judah is held to a higher standard: rejection of the law of the Lord (Amos 2:4–5).

One can imagine that Amos’s Israelite hearers were very pleased with him up to this point (Amos 2:5). He was reinforcing exactly what they believed: God was going to judge these godless neighbors (including the self-righteous Judeans), and there was every reason to believe that he would use Israel for the task of righteous judgment. But the last, and by far the longest, opening oracle is addressed to Israel. That must have come as a shock. Amos details Israel’s sins, ranging from oppression to obscenity to ritualistic religion (Amos 2:6–8). And these sins are clearly the worse because they are violations of Israel’s covenant with the God who graciously delivered them from Egypt and gave them the land of Canaan (Amos 2:9–12). As a result, nothing but destruction awaits them (Amos 2:13–16).

The second group of oracles (Amos 3:1–6:14) expands on these accusations and the accompanying announcement of judgment. They are lengthier than those in the first group and are characterized by the opening phrase “Hear this word” (Amos 3:1; 4:1; 5:1). From 5:18 to 6:14 there are three “woe” oracles, which may be construed as three parts of one longer address, or as a collection of three related addresses. This second group contains two short poems to God as Creator (Amos 4:13; 5:8–9). They are variously understood as fragments of a larger hymn that Amos made use of, or simply as an outburst of lyricism on the part of the prophet.

The final section of the book is a group of visions of the impending judgment (Amos 7:1–9:15). The first vision (Amos 7:1–17) shows that if God’s justice is to prevail, judgment cannot be averted. After the vision proper (Amos 7:1–9), there comes a historical experience in which the point of the vision is reinforced. If the priest of God, Amaziah, will not hear and repent (Amos 7:10–17), what hope can there be? The second vision (Amos 8:1–14) speaks of the imminence of the end. The final vision (Amos 9:1–15) describes the sacrifice that the Lord is going to make of Israel and yet of his preservation of the “booth of David” (Amos 9:11).