Discover the Basics of the Book of Acts

This introductory course is designed to provide key insights into the book of Acts by pulling together a number of key resources: overview videos from The Bible Project, helpful contextual information from The ESV Study Bible, commentary recommendations from The Gospel Coalition, a single sermon that sums up the book from beginning to end by Mark Dever, and much more. By watching, listening to, and reading these resources, you’ll be better prepared to read, study, teach, or preach the book of Acts.

Both the Gospel of Luke and Acts are anonymous, but the earliest discussions attribute them to Luke. The name “Luke” appears only three times in the NT: Colossians 4:14; 2 Timothy 4:11; Philemon 24. All three references are in epistles written by Paul from prison, and all three mention Luke’s presence with Paul.

The earliest discussion of the authorship of Luke and Acts is from Irenaeus, the bishop of Lyons in Gaul, writing in the late second century. He attributes the books to Luke, the coworker of Paul, and notes that the occurrence of the first-person narrative (“we”) throughout the later chapters of Acts (starting at Acts 16:10) indicates that the author of Acts was a companion of Paul and present with him on these occasions. These “we” passages in Acts are the key to the authorship of both Acts and the Gospel of Luke.

Colossians 4:14 indicates that Luke was a physician, and attempts have been made to bolster Lukan authorship by arguing that Luke and Acts use technical medical language. This does not seem to be the case, as Luke seems to have avoided technical language in order to communicate plainly to his readers, but his detailed description of illnesses perhaps reflects his interests as a physician (cf. Acts 28:8). In addition, all the external evidence refers to Luke as the author.

Other than the three NT references, nothing certain is known of Luke. Early traditions link him with Antioch, but that is probably based on the reference in Acts 13:1 to “Lucius,” which is a Latin name. “Luke” is a Greek name, and both books are written in excellent Greek. His thorough acquaintance with the OT may reflect that Luke was a converted God-fearer (a Gentile who attended the Jewish synagogue) or Jewish proselyte (convert), though he could have gained his biblical knowledge after becoming a Christian.

Some scholars date Acts c. A.D. 70. This assumes that Acts was written after the Gospel of Luke (Acts 1:1) and that Luke used the Gospel of Mark as one of his sources (Luke 1:1–2). (Early tradition has Mark’s Gospel written after Peter’s death, which most likely occurred in the mid-60s.) Others date Acts in the 70s or 80s. They hold that the primary purpose of Acts was to give an account of how and where the gospel spread, rather than to be a defense of Paul’s ministry (thus accounting for the omission of the events at the end of his life). Thus the gospel spread to “the end of the earth” (Acts 1:8)—that is, to Rome, which represented the end of the earth as the center of world power. But a number of scholars date Acts as early as A.D. 62, basing their view primarily on the abrupt ending of the book. Since Acts ends with Paul in Rome under house arrest, awaiting his trial before Caesar (Acts 28:30–31), it would seem strange if Luke knew about Paul’s release (a proof of his innocence), possibly about his defense before Caesar (fulfilling Acts 27:24), and about his preaching the gospel as far as Spain (cf. note on Acts 28:30–31), but then did not mention these events at the end of Acts. It seems most likely, then, that the abrupt ending is an indication that Luke wrote Acts c. A.D. 62, before these events occurred. 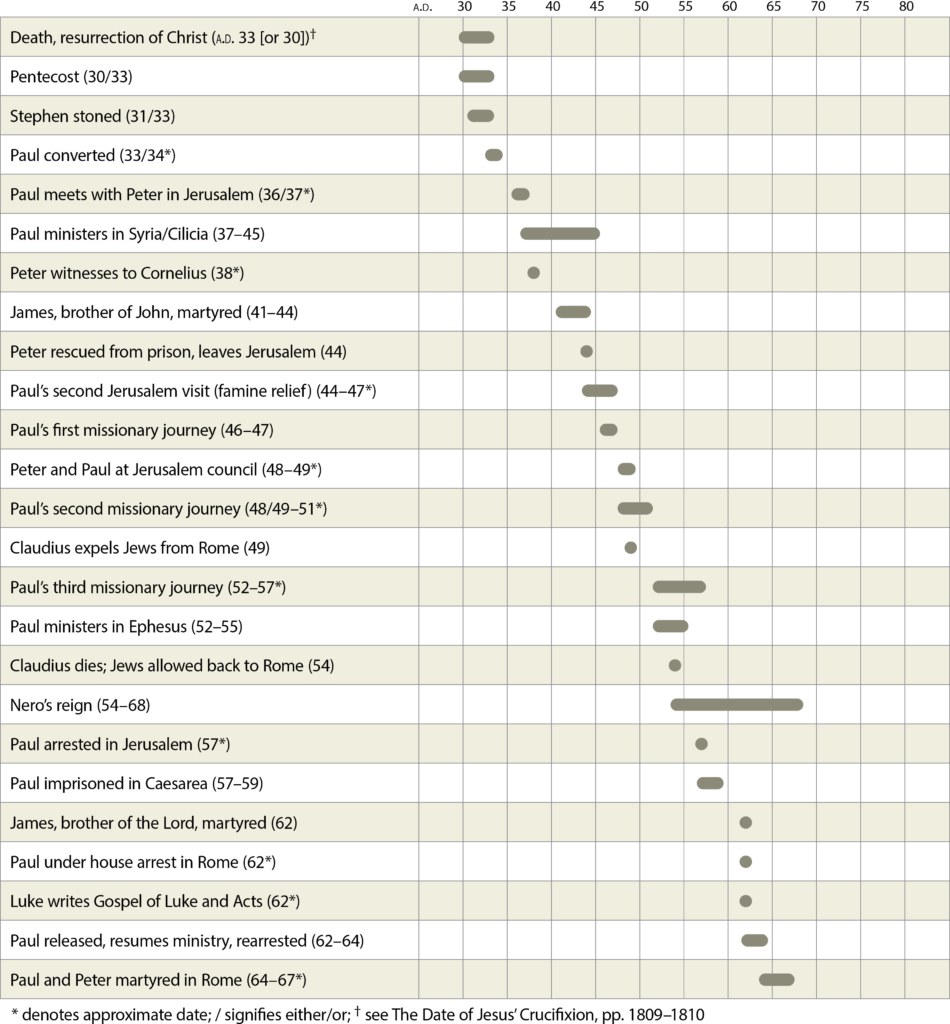 Following the story line becomes easy when one realizes that the book of Acts is structured on a cyclic principle in which a common pattern keeps getting repeated:

While this pattern is most obvious in the first half of the book, it extends in modified form to the journeys of Paul, whose repeated buffetings are followed by the expansion of the church.

The book of Acts is noteworthy for its narrative qualities. It is the report of an adventure, replete with arrests, imprisonments, beatings, riots, narrow escapes, a resurrection from death, a shipwreck, trial scenes, and rescues.

Places play a key role in Acts. The places that matter most are the great cities of the Mediterranean region in the first century. Geography assumes a symbolic as well as literal importance, as Jerusalem, where the story begins, symbolizes the Jewish religion from which Christianity emerged, and Rome, where the story ends, symbolizes the Gentile world to which Christianity gravitates as the early history of the church unfolds.

Out of a large body of available data, storytellers select the details that fit their design and purpose. It is a plausible premise that sometimes Luke chose to give representative examples of categories of experiences: examples of miraculous healings that were no doubt duplicated many times (e.g., Acts 3:1–10; 19:11–12), a specimen of preaching in the temple (Acts 3:11–26) and preaching to Greek intellectuals (Acts 17:16–34), an example of a martyrdom (ch. 7), and instances of individuals being converted (e.g., a Jew in Acts 9:1–19 and an Ethiopian in Acts 8:26–38) and of groups being converted (e.g., in Jerusalem in Acts 2:37–41 and in Greek Ephesus in Acts 19:17–20). 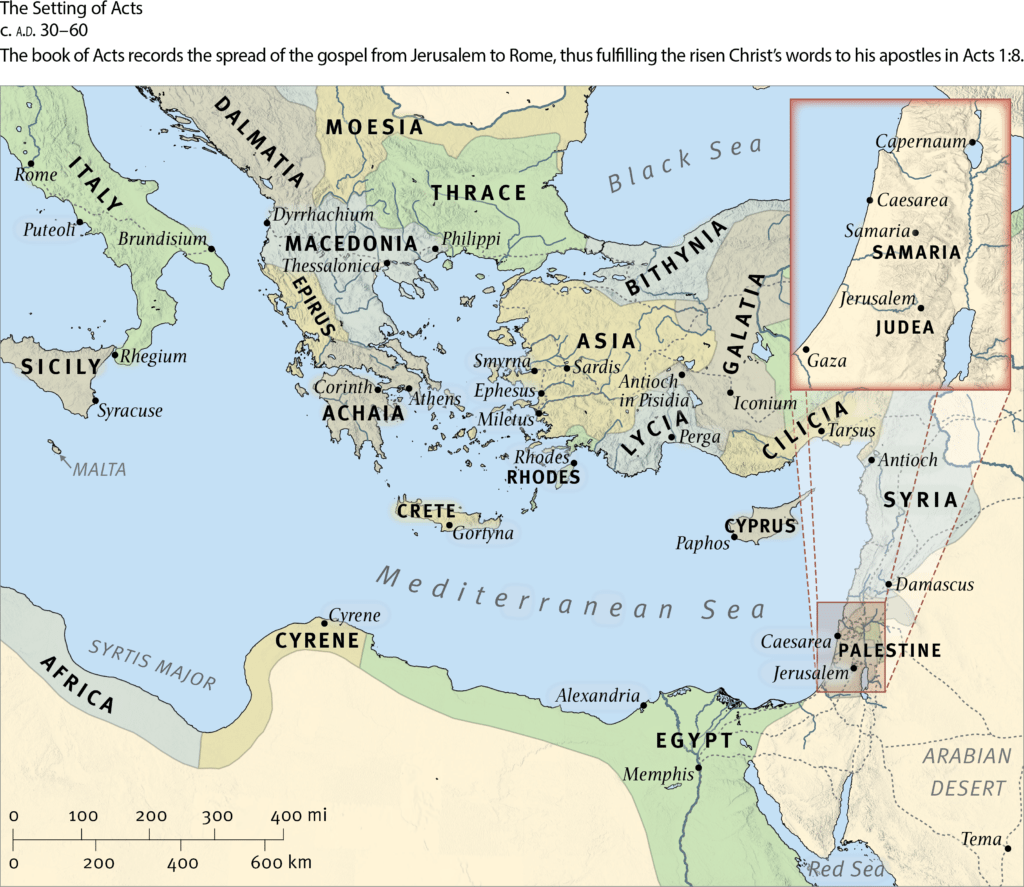 In Acts, believers are empowered by the Holy Spirit to bear witness to the good news of Jesus Christ among both Jews and Gentiles, and in doing this they establish the church. In addition to this, Acts explains how Christianity, although it is new, is in reality the one true religion, rooted in God’s promises from the beginning of time. In the ancient world it was important that a religion be shown to have stood the test of time. Thus Luke presents the church as the fulfillment and extension of God’s promises.

Luke’s stated purpose for both of his books is provided at the beginning of the first (Luke 1:1–4). He had a historian’s interest in providing an “orderly account” of “the things that have been accomplished among us.” One would assume the latter statement applied both to the ministry of Jesus (the gospel) and to that of the early church (Acts). Dedicating the work to Theophilus, he wanted him to have “certainty” (a firm foundation) for what he had been taught. The exact nature of Luke’s purpose depends on how one identifies Theophilus. He evidently had already been instructed in the Christian way and may have been a new convert or a seeker on the verge of commitment. Since “Theophilus” means “lover of God,” it is also possible that Luke is challenging the devotion of his readers rather than addressing his book to just one of them.

Luke probably had a number of purposes for writing Acts. These are best determined through the emphases or themes found throughout the book.

Acts is unique among the NT writings, in that its main purpose is to record a selective history of the early church following the resurrection of Christ. It is the second part of a two-volume work, with the Gospel of Luke being the first volume. Both books are dedicated to a person named Theophilus, and Acts 1:1 explicitly refers back to Luke’s Gospel.

Though Acts has much in common with the Gospels, it has a number of unique features. One of these is its genre: it is the only NT book that tells about the ministry of the apostles, hence its traditional name, “The Acts of the Apostles.” It deals primarily with two of them, Peter and Paul. Often Luke shows how events in their ministries parallel each other and the ministry of Jesus as well.

Among the unique features of Acts are the frequent summaries, where Luke provides a broad generalization about the life of the church at a particular time or place, such as the common life after Pentecost (Acts 2:42–47), the early Christian sharing of goods (Acts 4:32–35), and the apostolic miracles (Acts 5:12–16). Sometimes the summaries are much briefer, such as the single verse that sums up Paul’s ministry of more than two years in Ephesus (Acts 19:10). Luke’s usual method of presenting the Christians’ ministry is more “episodic,” highlighting individual incidents that illustrate their work, giving it greater liveliness and interest. For instance, at Ephesus this includes the conversion of some disciples of John the Baptist (Acts 19:1–7), the “backfiring” exorcism of the sons of Sceva (Acts 19:13–16), and the riot occasioned by the silversmith Demetrius (Acts 19:23–41).

Another distinctive feature of Acts is its journey narratives. Often these are only lists of stopping places or ports that are passed by (e.g., Acts 16:6–8; 20:14–15; 21:2–3). These give the impression of the Christian missionaries being constantly on the move and are the main reason for giving Paul’s ministry the label of “journeys.” In fact, that label best applies to the first of Paul’s missions (chs. 13–14). The others consisted mainly of more lengthy stays in the major cities (e.g., Corinth, Ephesus).

The early manuscripts of Acts have a greater variety of readings than any other NT book. This is reflected in the ESV Study Bible footnotes that provide alternative readings, as well as the absence of whole verses in some instances (Acts 8:37; 15:34; 24:7; 28:29). The greatest diversity is shown by a group of manuscripts that scholars refer to as the “Western text,” an early version of Acts that is about ten percent longer than the other texts. Its main difference from the others is in providing additional detail and smoothing out the narrative. No standard English translation follows the Western text. Some of its more interesting readings are provided in the ESV Study Bible footnotes, such as the note about the hours when Paul preached in the hall of Tyrannus in Ephesus (Acts 19:9).