Discover the Basics of the Book of 2 Peter

This introductory course is designed to provide key insights into the book of 2 Peter by pulling together a number of key resources: overview videos from Fast Facts and The Bible Project, helpful contextual information from The ESV Study Bible, commentary recommendations from The Gospel Coalition, a single sermon that sums up the book from beginning to end by Mark Dever, and much more. By watching, listening to, and reading these resources, you’ll be better prepared to read, study, teach, or preach the book of 2 Peter.

Within 2 Peter itself there is strong evidence for authorship by the apostle Peter. In 2 Peter 1:1 the author claims to be “Simeon Peter . . . apostle of Jesus Christ.” Moreover, he claims to have been an eyewitness of the transfiguration (2 Pet. 1:16–18; cf. Matt. 17:1–8), an event where Peter is featured prominently in the Gospel accounts. If someone other than Peter wrote the letter under his name, as some scholars have claimed, it would be a case of deliberate deception, especially given the author’s claims to have witnessed the transfiguration. But there is no historical evidence in support of such a theory. Furthermore, writing in another person’s name was condemned among early Christians (cf. 2 Thess. 2:2; 3:17; see Introduction to 1 Timothy course: Author & Date).

Some have suggested that the literary style of 2 Peter, which differs from that of 1 Peter, indicates an author other than Peter. But Peter may have used a secretary to help write this second letter, which would not affect the genuineness of his authorship if he ultimately approved what was written.

Scholars have also questioned Petrine authorship of 2 Peter because of the similarities between chapter 2 of this letter and the book of Jude. But this is not a problem for apostolic authorship, since Peter may have included in his letter elements from Jude that he thought would be helpful for his readers. It also could have worked the other way, with Jude using Peter’s letter as his source. The parallels are close but almost never exact, so it is difficult to sort out the relationship between 2 Peter and Jude with any degree of certainty.

It is reasonable in light of all the evidence, and clearly supported by the claims of the letter itself, to conclude that the apostle Peter wrote 2 Peter.

Peter probably wrote this letter from Rome not too long before his martyrdom, sometime during A.D. 64–67. Elements within the letter lead many scholars to conclude that Peter wrote during a time of persecution by Rome (perhaps during the persecution by Nero, who died in A.D. 68), while Peter himself was in a Roman prison awaiting imminent execution (cf. 2 Pet. 1:12–15). The dating of the letter, then, depends largely on the dating of Peter’s death. 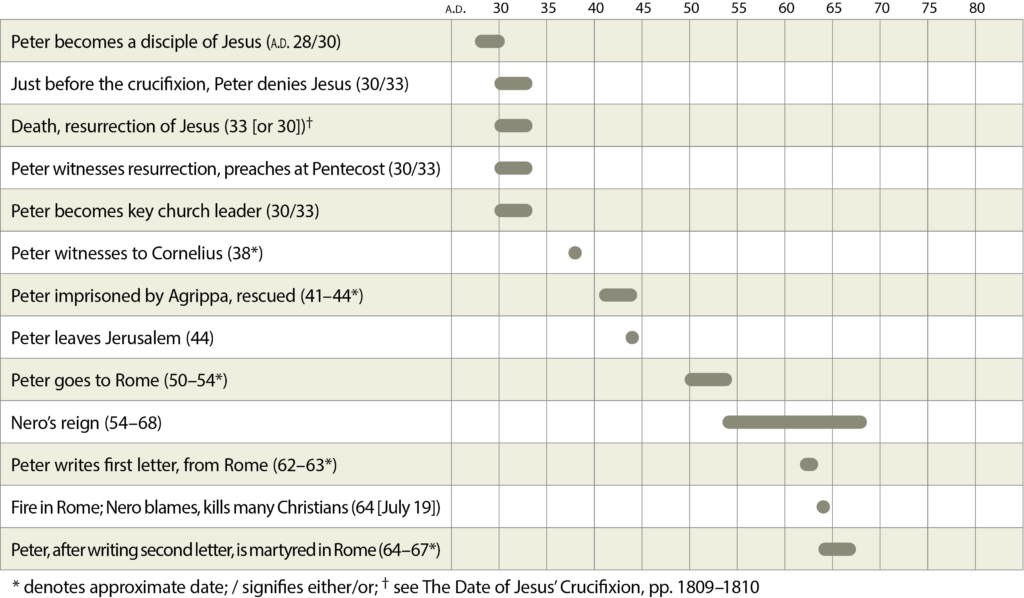 The primary form is the epistle, with its usual elements. Partly on the basis of 2 Peter 1:13–14, where Peter asserts that he will soon depart this life, it is customary to view 2 Peter as adhering to some of the conventions of the farewell discourse. Motifs that belong to that genre include the author’s (a) announcing that he is near the end of his earthly life, (b) reminding his followers of what he has taught them, (c) commanding his followers how to live, and (d) predicting what will happen in the future. In a farewell discourse, a leader has his last chance to influence his followers in the right direction for the sake of the movement in which he has been a guiding light. Second Peter is also filled with famous proverbs and aphoristic statements, vivid poetry and imagery, and an eschatological (end-time) discourse (ch. 3).

Much of the letter falls into place if one grasps that Peter’s horror at false teaching (see esp. ch. 2) is set over against the reliability of God’s prophetic word (2 Pet. 1:19–21; 3:1–2). These two motifs converge in the vision of the last chapter, where biblical prophecy about the return of Christ is aggressively offered as a rebuttal of scoffers (false teachers) who denigrate biblical prophecy. In 2 Peter, true and false teaching engage in a combat of huge proportions.

Second Peter teaches that the grace of God in Christ truly transforms and empowers Christians to live righteously, even in the face of opposition. This grace, introduced in 2 Peter 1:2–4, serves as the foundation for the remainder of the exhortations. The indwelling Holy Spirit (cf. 2 Pet. 1:4, which characterizes Christians as “partakers of the divine nature”) produces virtuous “qualities” in followers of Christ (2 Pet. 1:8–12), which in turn results in fruitful lives.

Peter writes this brief, final reminder to the churches so that his readers will by God’s grace live a life that is pleasing to God. In doing so, Peter must also combat the false teachers who were apparently exerting pressure on the churches to depart from the true knowledge of Christ (see esp. ch. 2). The false teaching is not only a theological challenge but also a moral one, holding forth some form of sexual permissiveness as a legitimate Christian lifestyle. While the false teaching can be described based on what Peter writes, it is historically impossible to identify who the false teachers were. For example, there is no clear historical evidence that these teachers were Gnostic or proto-Gnostic.

It is also impossible to identify with certainty the churches Peter is addressing. The leading historical candidates are the churches of Asia Minor, for Peter wrote his first letter to these churches (1 Pet. 1:1–2), and in this letter Peter mentions that this is his second letter to these same people (2 Pet. 3:1).

Christians are to hold fast to the truth in Christ while patiently awaiting the second coming.