Discover the Basics of the Book of 2 Corinthians

This introductory course is designed to provide key insights into the book of 2 Corinthians by pulling together a number of key resources: overview videos from The Bible Project, helpful contextual information from The ESV Study Bible, commentary recommendations from The Gospel Coalition, a single sermon that sums up the book from beginning to end by Mark Dever, and much more. By watching, listening to, and reading these resources, you’ll be better prepared to read, study, teach, or preach the book of 2 Corinthians.

The apostle Paul is the undisputed author of 2 Corinthians. Although some scholars have questioned whether Paul wrote 2 Cor. 6:14–7:1, due to its unique vocabulary and subject matter, these differences are more likely due to the fact that in this passage Paul is quoting a collage of Scripture. Second Corinthians is actually the fourth letter that Paul sent to the church he founded in Corinth (Acts 18:1–17), together with the house churches “in the whole [province] of Achaia,” of which Corinth was the capital (2 Cor. 1:1; 11:10; cf. Rom. 16:5, 23; 1 Cor. 16:15, 19). The four letters are (1) the previous letter mentioned in 1 Corinthians 5:9; (2) our 1 Corinthians; (3) the tearful, severe letter mentioned in 2 Corinthians 2:3–4; and (4) our 2 Corinthians.

Paul wrote 2 Corinthians from Macedonia around A.D. 55/56, a year or so after writing 1 Corinthians and a year before he wrote his letter to the Romans from Corinth (Acts 20:2–3). 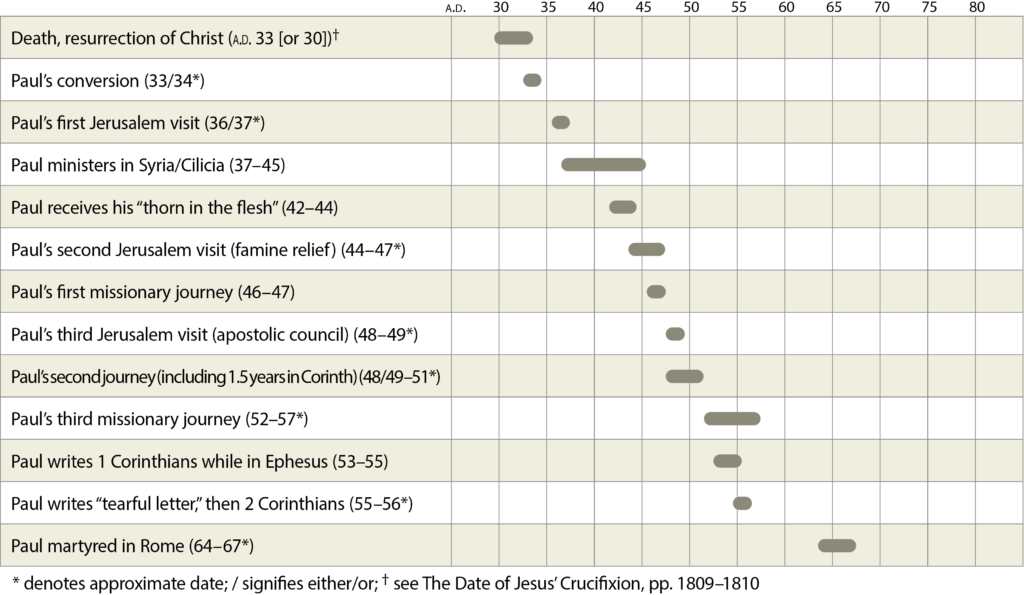 Second Corinthians is an informal occasional epistle, with a disjointed organization and numerous “asides” that are introduced without smooth tie-ins to the preceding material. The letter is also a missionary manual, based on the author’s real-life missionary experiences. The usual conventions of the epistle appear early and late with the epistolary salutation, thanksgiving, and closing. The conventional paraenesis (list of moral exhortations) is absent. Occupying prominent places in the body of the letter are an extended defense of the author’s life and ministry and a formal boast in a spiritualized version of it. The letter is heavily occasional, meaning that it is filled with references to specific events in Paul’s life and ministry. In the background can be seen the familiar genre of autobiography. Second Corinthians is also a missionary appeal letter that requests spiritual and financial support.

Second Corinthians mingles a number of stylistic features or ingredients, including self-portraiture, lyric outbursts of emotion, denunciation of opponents, sarcasm, threats, and expressions of personal affection. Further, the style is very personal and autobiographical, filled with references to Paul’s own life. Exalted style frequently surfaces, with impressive vocabulary, catalogs or lists, parallel constructions, and rhetorical embellishments such as contrast and paradox.

The inferred literary intentions of the letter are as follows: to provide a vindication of the author’s life in the standard literary genre known as apologia pro vita sua; to paint a portrait of the author and his life in such a way that the reader in his imagination becomes the author’s traveling companion; to inspire the reader with the literary and rhetorical flourishes that appear in abundance; to win the reader with its aphoristic flair; and to persuade readers to support faithful and genuine ministry of the gospel.

Paul therefore sees a close tie between the Corinthians’ acceptance of his apostleship and the genuineness of their faith. To reject Paul and his proclamation is to reject Christ himself, since Paul’s message, ministry, and manner of life are one. This explains why 2 Corinthians is the most personal of all of Paul’s letters, filled with deep emotion.

Second Corinthians is a response to a complicated history between Paul and the Corinthian church, which must be reconstructed from the evidence available today (see ESV Study Bible note on Acts 20:1). Originally, Paul had planned to travel from Ephesus through Macedonia to Corinth on his way back to Jerusalem to deliver the money he had collected for the believers in Judea (1 Cor. 16:5–9). In the meantime, he sent Timothy to visit the Corinthians on his behalf (Acts 19:22; 1 Cor. 16:10–11). When Timothy arrived in Corinth, he found that the church was in turmoil, most likely in response to the arrival of Paul’s opponents from the east. When Paul learned of this he decided to proceed immediately to Corinth to resolve the issues first, then travel on to Macedonia before returning to Corinth for a second visit on his way to Jerusalem (the proposed “second experience of grace” of 2 Cor. 1:15).

To Paul’s great joy, the majority of the Corinthians did repent, which Paul discovered when he met Titus in Macedonia (2 Cor. 7:5–16). But there was still a rebellious minority who, under the influence of Paul’s opponents (2 Cor. 11:12–21), continued to reject Paul and his gospel. In response, and as yet another act of mercy, Paul wrote 2 Corinthians from Macedonia in anticipation of his third, impending visit to Corinth before going on to Jerusalem (2 Cor. 12:14; 13:1).

The mixed nature of the church in Corinth, not to mention the opponents whom Paul addresses indirectly throughout the letter, explains the complex nature of 2 Corinthians and its sometimes sudden shifts in focus and tone. This has led some scholars to suggest that it is a compilation of as many as six fragments. There is no evidence, however, that 2 Corinthians ever contained less than or more than its present content, or that it was arranged in a different order.

Paul’s letter is an extended defense of the legitimacy of his apostolic ministry and its implications. It is intended to accomplish three overlapping purposes:

Thus, chapters 1–7 focus primarily on the past track record of Paul’s ministry, chapters 8–9 on the present responsibility of the repentant, and chapters 10–13 on the future judgment of those still in rebellion against the gospel.

God brought about salvation through the weakness of Christ’s crucifixion, in fulfillment of Psalm 22 and Isaiah 53. Christians in turn are to find strength in Christ and not in themselves.