Discover the Basics of the Book of 1 Peter

This introductory course is designed to provide key insights into the book of 1 Peter by pulling together a number of key resources: overview videos from Fast Facts and The Bible Project, helpful contextual information from The ESV Study Bible, commentary recommendations from The Gospel Coalition, a single sermon that sums up the book from beginning to end by Mark Dever, and much more. By watching, listening to, and reading these resources, you’ll be better prepared to read, study, teach, or preach the book of 1 Peter.

That this letter was written by the apostle Peter is explicitly affirmed by 1 Peter 1:1 and by the author’s claim to be an “eyewitness of the sufferings of Christ” (1 Pet. 5:1). The title of the letter, The First Letter of Peter, functions as early external evidence for the view that the letter was written by Peter. Indeed, in the early church there was no dispute over the authenticity of the letter, for it was regularly ascribed to Peter by the early church fathers.

Some recent scholars maintain that the letter is pseudonymous (falsely ascribed to Peter). Thus some have argued that:

None of these objections are compelling, and there are persuasive reasons for continuing to support Petrine authorship:

On balance, there are compelling reasons to conclude that the apostle Peter is in fact the author of 1 Peter.

The date of 1 Peter is linked with the issue of authorship. Those who reject Peter as the author typically date the letter in the reign of Domitian (A.D. 81–96) or Trajan (98–117). Since there are good grounds for holding to Petrine authorship, the letter probably should be dated during the reign of Nero (A.D. 54–68). The reference to Babylon in 1 Peter 5:13 is almost certainly a reference to Rome, leading one to conclude that Peter wrote the letter from Rome. He probably wrote before the Neronian persecution in Rome, and thus the date of composition is likely A.D. 62–63. 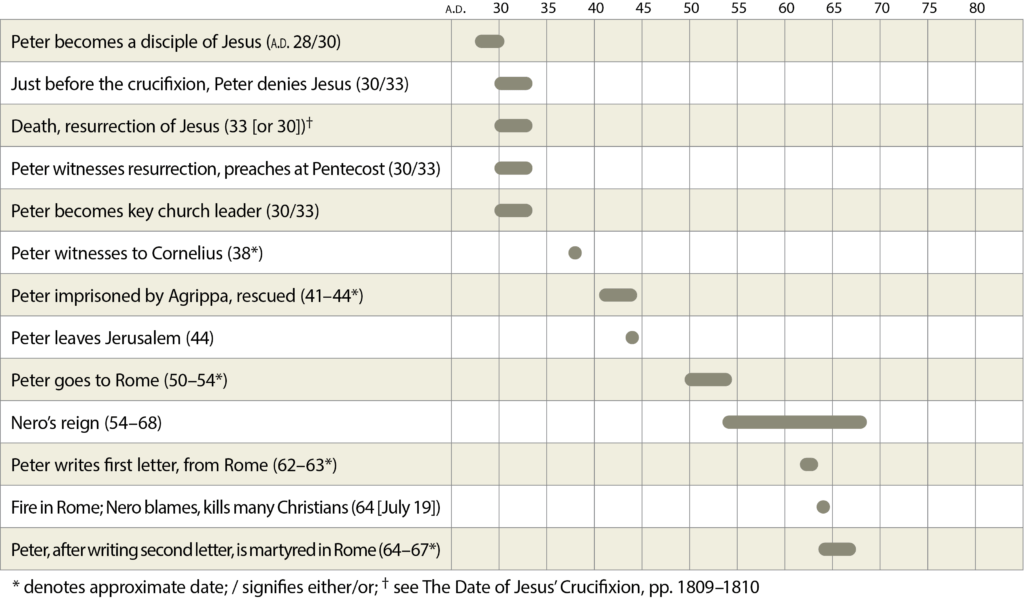 First Peter follows the usual contours of the NT epistles. Along with the standard ingredients of salutation-thanksgiving-body-paraenesis (moral exhortations)-closing, there is a pattern of back-and-forth movement between theological assertions and either practical application or lyric celebration. The book moves in a fluid manner between two poles: the riches that believers have in Christ and the duties they need to shoulder, within the implied situation of their living in a hostile surrounding culture.

First Peter is exuberant in tone and exalted in language. Virtually every paragraph contains vivid imagery and a skillful use of figurative language. The tone of the book is urgent and intense, as signaled by the presence of more than 30 imperative verbs (an average of one command in every three verses). The content and style are thus elevated and elevating. 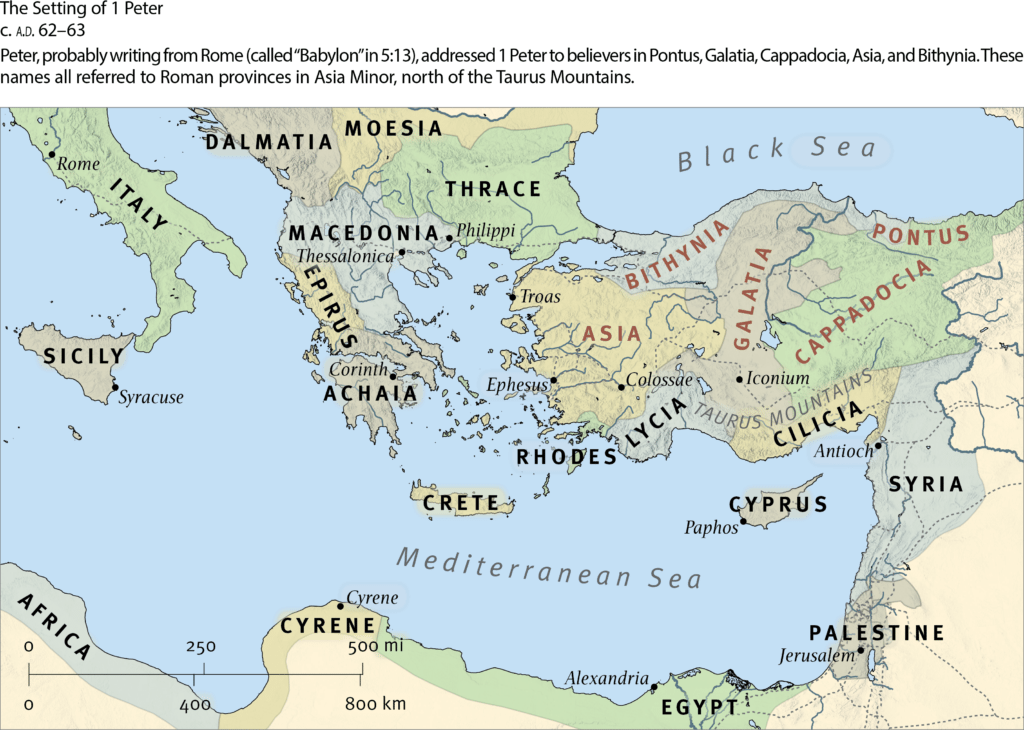 Those who persevere in faith while suffering persecution should be full of hope, for they will certainly enjoy end-time salvation since they are already enjoying God’s saving promises here and now through the death and resurrection of Christ.

Peter encourages his readers to endure suffering and persecution (1 Pet. 1:6–7; 2:18–20; 3:9, 13–17; 4:1–4, 12–19; 5:9) by giving themselves entirely to God (1 Pet. 4:19). They are to remain faithful in times of distress, knowing that God will vindicate them and that they will certainly enjoy the salvation that the Lord has promised. The death and resurrection of Christ stand as the paradigm for the lives of believers. Just as Christ suffered and then entered into glory, so too his followers will suffer before being exalted.

The letter is addressed to Christians dispersed in “Pontus, Galatia, Cappadocia, Asia, and Bithynia” (1 Pet. 1:1), an area north of the Taurus Mountains in Asia Minor (modern-day Turkey); see map. These provinces were ethnically (and at times linguistically) diverse, yet all these territories had been impacted by Greco-Roman culture and were firmly under Roman control from the mid-first century B.C. The order in which the areas are listed probably designates the order in which the courier (Silvanus, see 1 Pet. 5:12) would carry the letter to its intended readership.

Most scholars are convinced that the recipients of 1 Peter were primarily Gentiles. The reference to their “former ignorance” (1 Pet. 1:14) and “the futile ways inherited from your forefathers” (1 Pet. 1:18) suggests a pagan past that would not fit with Jewish readers. Further, the former lifestyle of the readers (1 Pet. 4:3–4) fits with Gentiles rather than Jews. But undoubtedly there were also some Jewish Christians in these churches, for Jewish residents of “Cappadocia, Pontus and Asia” were present at Pentecost and heard the gospel at that early date (Acts 2:9; see ESV Study Bible note on Acts 9:19b–20). Though the recipients may have been literally “exiles” (1 Pet. 1:1, 17; 2:11), it is more likely that Peter speaks figuratively here: they are spiritual exiles awaiting their heavenly inheritance.

In the past, many scholars detected an empire-wide persecution of Christians in 1 Peter, whether under Nero (A.D. 54–68), Domitian (81–96), or Trajan (98–117), and even used this argument to deny that Peter wrote the letter by specifically placing 1 Peter in the reign of either Domitian or Trajan. However, the evidence is lacking for an official government policy against Christians in the reign of all these emperors. Instead, there were spasmodic and general outbursts against Christians during the first century. Nero’s persecution of Christians after the great fire in Rome (A.D. 64) did not launch official empire-wide persecution of all Christians; nor does 1 Peter reflect an official policy against Christians. Also, an empire-wide decree against Christians is not necessitated by Peter’s writing about the need to respond when asked about one’s faith (1 Pet. 3:15), the charges brought against Christians (1 Pet. 4:14–16), or the reference to believers suffering worldwide (1 Pet. 5:9). The questions and charges brought against Christians that Peter mentions in 1 Peter 3:15 and 4:14–16 were typical of the everyday questions believers would encounter because of their faith. In some instances, Roman authorities punished Christians, but even in these cases it was a local and restricted response. The reference to believers suffering throughout the world (1 Pet. 5:9) does not signal that the Roman Empire had passed a decree against the Christian faith. This verse simply reveals that the Christian faith was under threat in the entire Greco-Roman world. Indeed, 1 Peter says nothing about Christians suffering physically for their faith. The focus is on the verbal abuse and discrimination they receive because of their Christian commitment (1 Pet. 4:3–4). Of course, verbal abuse easily leads to physical mistreatment, and it is possible that some of the believers to whom Peter wrote were suffering physical abuse for their faith as well (cf. 1 Pet. 2:18–20).

Christians are to endure suffering for the sake of Christ, looking back on Christ’s sufferings and forward to the consummation of salvation in his second coming.