Discover the Basics of the Book of 1 John

This introductory course is designed to provide key insights into the book of 1 John by pulling together a number of key resources: overview videos from Fast Facts and The Bible Project, helpful contextual information from The ESV Study Bible, commentary recommendations from The Gospel Coalition, a single sermon that sums up the book from beginning to end by Mark Dever, and much more. By watching, listening to, and reading these resources, you’ll be better prepared to read, study, teach, or preach the book of 1 John.

Manuscript evidence is unanimous that someone named “John” wrote this little treatise, which is consistently labeled the “first” of his extant letters in titles found in ancient copies. But who is this “John”? For a number of reasons, John the son of Zebedee, author of the Fourth Gospel, is the most likely candidate (see Introduction to John course: Author & Date).

First, the style and vocabulary of John’s Gospel and 1 John are so similar that a common author is extremely likely. This is particularly evident in the opening verses of the respective writings, but the language of the Gospel echoes across the whole epistle. For example, only verbal forms of “believe” occur (about a hundred times) in John’s Gospel; the noun “faith” never appears. First John follows suit, with nine occurrences of a verbal form of “believe” and just one use of the word “faith” (1 John 5:4). Second, major themes and emphases of the writings overlap. These include Christ’s simultaneous full humanity and divinity, the close relationship between believing (faith, doctrine) and obeying God’s commandments (ethics), and the primacy of love as marking authentic knowledge of the true God through trust in his Son.

While John is not mentioned by name in the Fourth Gospel, he is likely to have been “the beloved disciple” who reclined next to Jesus at the Last Supper (John 13:23; arguments that he was Lazarus, an “elder” John, or a fictional creation are unconvincing). He stood at the foot of the cross when Jesus was crucified; Jesus entrusted his mother Mary to John’s care (John 19:26–27). Along with Peter he witnessed the empty tomb on the first Easter morning (John 20:2–10). He also saw, spoke with, and ate breakfast at a lakeside fire kindled by the resurrected Jesus (John 21:7, 20). He was therefore highly qualified to write of what he and others had heard, seen, gazed upon, and touched (1 John 1:1). As Jesus’ “beloved disciple,” he was also well suited to plumb the depths of the meaning of Jesus’ coming (1 John 1:2; 4:9), life (1 John 2:6; 4:14), death (1 John 1:7), resurrection (1 John 5:11; “eternal life . . . in his Son” implies his death was not final), intercessory ministry at the Father’s right hand (1 John 2:1), and eventual return (1 John 2:28)—all matters playing a role in the witness, instruction, and admonition of this rich and highly concentrated letter.

Early post-apostolic figures like Polycarp and Papias (c. A.D. 100) presuppose or cite 1 John in their writings. This suggests a date of composition no later than the 90s A.D. This dovetails with the testimony of church fathers that, shortly before A.D. 67, John joined other Christians in departing from Jerusalem prior to the destruction of the city by Rome. John reportedly resumed his apostolic ministry in the vicinity of the great but highly idolatrous city of Ephesus (in modern western Turkey). He likely wrote 1 John as an elder statesman of the faith in the last third of the first century, perhaps to churches in the surrounding region. This might have included towns like those mentioned alongside Ephesus in the opening chapters of Revelation: Smyrna, Pergamum, Thyatira, Sardis, Philadelphia, and Laodicea (Rev. 2:8–3:22).

First John lacks certain earmarks of a typical Hellenistic letter. For example, the writer does not name himself at the outset (as Paul always does), and the book is somewhat sermonic in tone. Yet on several counts it is highly letter-like, as seen from the expressed motive of shared joy (1 John 1:4), the repeated mentions of the act and purpose of writing to his recipients (13 uses of the Gk. verb “I write”), and the many instances of direct address to the readers. First John was judged to be in the form of a letter by ancient writers such as Irenaeus, Dionysius of Alexandria, and Eusebius, who would have understood the prevailing conventions of letter writing.

The rhetoric of 1 John is challenging. John rarely sustains a clear line of argument for more than a few lines or verses. He wanders from subject to subject, unencumbered by any discernible outline. Yet if he has no plan, he does follow a pattern: after leaving a subject he often returns to it. His style of thought has been termed circular rather than linear. It has also been termed symphonic, in that he states themes, moves away from them, and then revisits them with variations.

While the rhetoric of 1 John poses difficulties, his content is rich in doctrinal substance, ethical challenge, and devotional fervor. John is insistent that no one has ever seen God the Father in his unmediated glory (1 John 4:12; see John 1:18), yet just as insistent that to know Jesus is to know “the true God and eternal life” (1 John 5:20). The mystery of this dialectic suffuses the letter from start to finish and moves John to write with insight, consistency, intensity, and depth. Yet his language is for the most part simple and his vocabulary modest. Line for line there are few biblical writings that surpass 1 John in the imposing demands made on the reader along with the rich rewards that studied interpretation will yield. 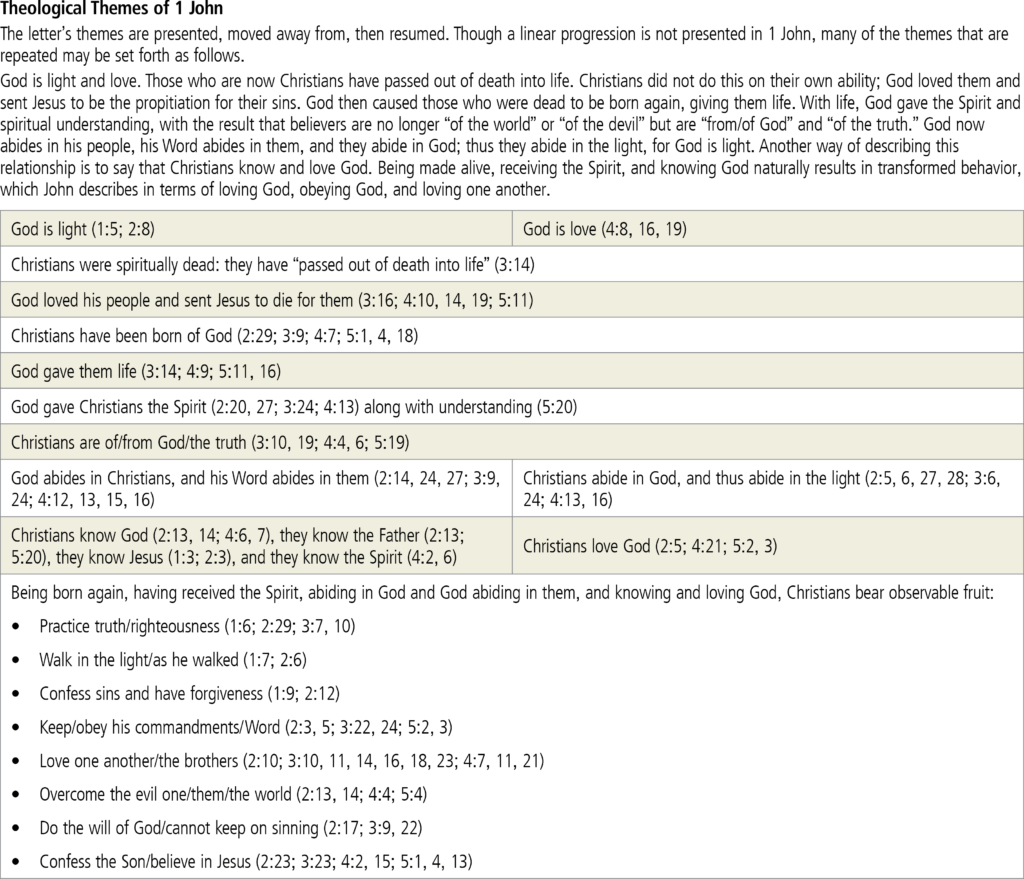 First John is ostensibly an epistle, but its content is more fluid than what is found in most NT epistles. There is no epistolary salutation, nor is there a conventional epistolary conclusion. A more accurate designation is to call this book a treatise or pamphlet. Alternately, it can be read as an address or loosely structured sermon. The topic changes with virtually every paragraph, so the best advice for reading the book is to “think paragraphs.”

Nonetheless, even though the structure of 1 John is not strictly linear, the author keeps coming back to topics that have been introduced earlier, so that readers can profitably think of the book as being arranged like a musical symphony. The main theme is tests by which we can know if we are in Christ—beliefs and attitudes that authenticate one’s claims to be a Christian. Under that umbrella, subordinate themes appear: Christology (doctrine about the person and work of Christ); walking in the light; love; and the need to reject fallen, worldly culture. These topics weave in and out of the book. The book is structured on an implied dialectical principle in which John continuously seeks to oppose viewpoints that are contrary to his assertions. For example, John’s assertions that Christ has come in the flesh (1 John 1:1–3 and 4:2) are an implied refutation of those who deny the incarnation. Finally, there is an incipient poetry and mysticism about John’s writing, so that, for example, a lot of what John asserts about the Christian life is embodied in great symbols like light and darkness, or walking and abiding in Christ.

In 1 John the author calls readers back to the three basics of Christian life: true doctrine, obedient living, and fervent devotion. Because “God is light” (1 John 1:5), Christ’s followers overcome evildoers who seek to subvert them. The one who lives in and among them—God’s Son—is greater than the spirit of “the antichrist” now in the world (1 John 4:3–4). To believe in the name of the Son of God is to know the assurance of eternal life (1 John 5:13).

It is customary to understand 1 John as a response to the rise of an early form of Gnosticism. This was a religious mysticism that pirated Christian motifs to propagate an understanding of salvation based on esoteric “knowledge” (Gk. gnōsis). According to this view, redemption is through affirming the divine light already in the human soul, not through repentance of sin and faith in Christ’s death to bring about spiritual rebirth. Writings widely publicized in recent years, like the Gospel of Thomas and Gospel of Judas, for example, were products of Gnostic writers. But the heyday of Gnostic thought was the second through fifth centuries, well after the time the NT books were written. It can neither be proven nor ruled out that John had this movement in mind as he wrote.

The study notes for this book will focus on what seems definite in 1 John rather than what can be imagined. John wrote to Christians who had witnessed an exodus from their ranks (1 John 2:19). This does not mean that all John wrote should be interpreted as a response to schism—John is neither anti-Gnostic nor anti-schismatic. John’s focus is positive, not polemical. His aim is redemptive, not reactionary. He urges readers to refine their theological understanding, sharpen their ethical rigor, and heighten their devotional intensity. That is, they must grow in faith, obedience, and love. Yet the letter is not a list of dos and don’ts. It is rather a manifesto of “Done!”—Jesus’ words “It is finished” (John 19:30) come to mind. First John highlights what God the Father has “done” in sending Christ the Son, offering him up as a sacrifice for sins, and sending forth “the word of life” (1 John 1:1) that is causing this world’s darkness to pass away and the true light of the coming age to shine (1 John 2:8).

God’s action becomes the mandate of those who believe in his Son. “Whoever does the will of God abides forever” (1 John 2:17). God’s will is for readers to receive the saving message of Christ’s coming, rejoice in the commands of Christ’s teaching, and revel in the love of the Father as it continually translates into Christian love for one another and ministry to the world. This is “not love in word or talk but in deed and in truth” (1 John 3:18).