Discover the Basics of the Book of 1 Corinthians

This introductory course is designed to provide key insights into the book of 1 Corinthians by pulling together a number of key resources: overview videos from The Bible Project, helpful contextual information from The ESV Study Bible, commentary recommendations from The Gospel Coalition, a single sermon that sums up the book from beginning to end by Mark Dever, and much more. By watching, listening to, and reading these resources, you’ll be better prepared to read, study, teach, or preach the book of 1 Corinthians.

The first word of 1 Corinthians states that Paul is its author. There is no good reason to doubt this. The theological concerns of the letter, the energy of its style, its vocabulary, and its historical connections with the other Pauline letters and Acts mark it as Pauline. The traditional title of the letter means that it is the first of two canonical letters by Paul to the Corinthians, not that it was Paul’s first letter to them (see 1 Cor. 5:9). 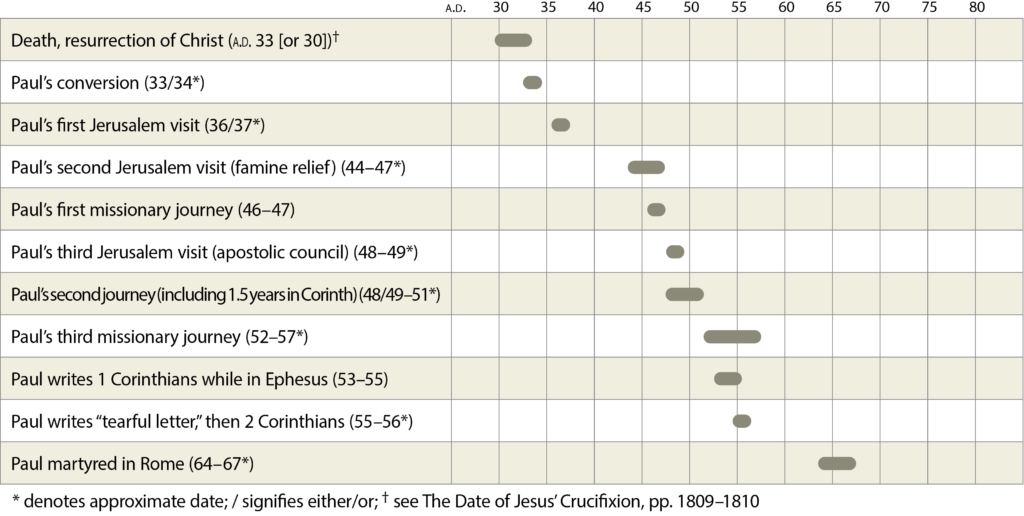 First Corinthians is a pastoral letter to a spiritually troubled church. Like other NT Epistles, it is an “occasional” letter, and one can quite readily piece together the things that occasioned 1 Corinthians by noting signals in the text. The letter is highly relevant today, as it deals with such issues as the relationship between Christians and their surrounding pagan culture, divisions within the church, the ordering of church practices such as the Lord’s Supper, and the use of spiritual gifts. The letter also deals with matters of personal morality, such as sex, marriage, celibacy, and the virtues (esp. love).

First Corinthians follows the form of a typical first-century epistle, though its content is governed by the specific situation in the Corinthian church. For example, the usual epistolary elements of salutation, thanksgiving, and paraenesis (set of moral exhortations) receive scant treatment. The body of the letter is taken up with situations and questions from the Corinthian church that Paul addresses, and the epistolary close (ch. 16) is extensive because of business Paul has with the church. The rhetorical modes of exhortation and instruction dominate the letter. Chapter 13 is an encomium (a written tribute) in praise of love.

The book makes extensive use of rhetorical techniques such as contrast, repetition, and analogy. It draws sharp contrasts between truth and error, and between moral good and evil. Because Paul regards the Corinthian Christians as being out of line in a number of areas, the letter exhibits a strong corrective tone.

The Acrocorinth is a small but steep mountain 1,886 feet (575 m) high on the Peloponnesian peninsula in southern Greece. Ancient Corinth was built at the mountain’s foot, benefiting also from the natural spring that provided water for the town. In Paul’s day Corinth, though a couple of miles inland, oversaw the territory connecting the Adriatic port of Lechaion on the west with the Aegean port of Cenchreae to the east (see Acts 18:18). Ships were often portaged between these seaports across this narrow stretch of the Peloponnesian isthmus, approximately 3.7 miles (6 km) wide at its narrowest. Several rulers in the first century A.D. foolishly attempted to construct a canal across the isthmus, but this was not successfully accomplished until the nineteenth century.

The famed Greek city of Corinth, renowned for its artistry in bronze, its wealth, and its wanton sexuality, was destroyed in 146 B.C. during a war with Rome. The city was re-founded as a Roman colony in 44 B.C. by Roman freedmen, and the distinct archaeological strata in the city center testify to this gap in its history. Inscriptions from the first hundred years of the new colony were mostly in Latin, although strong marks of Greek culture were also evident in the art and life of the city.

First-century Corinth followed a Roman city plan based on a rectangular grid. Typical urban structures were built (or reconstructed), such as shops, stoas, basilicas, a bouleuterion (for the city council meetings), a gymnasium, baths, latrines, and a theater. A few large houses from this period have also been excavated. The center of town boasted the refashioned Peirene Fountain as a pleasant place from which to draw spring water. To this day a raised speaker’s platform stands in the main forum, and a nearby inscription refers to this platform as the rostra (equivalent to a bēma or tribunal); this is probably the very location where Gallio judged Paul to be innocent (Acts 18:12–17). Some other significant archaeological remains date from post-NT times, such as the odeion (a small covered theater). 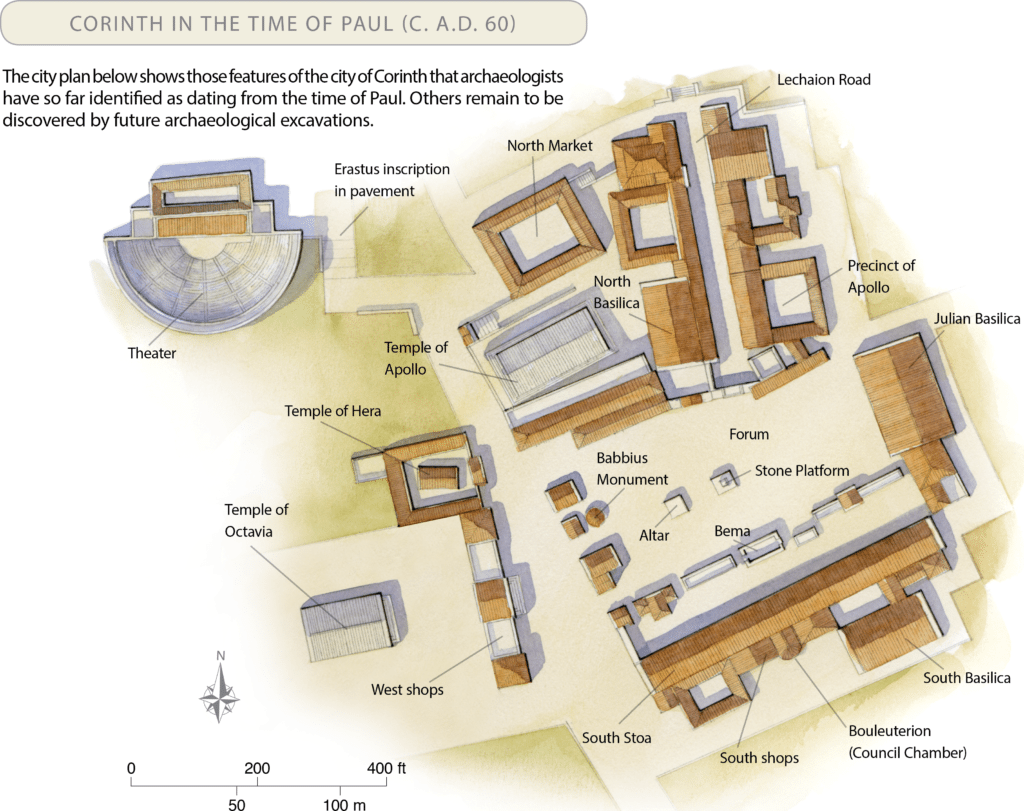 In Paul’s day the great Doric-style temple (to Athena or Apollo) from the sixth century B.C. remained a central feature in Corinth, and multiple temples to other deities dotted the city. Indeed, when the author Pausanias wrote about Corinth in the mid-second century A.D., his description of the city read like a tour guide of pagan monumental sacred sites. Corinth boasted an important sanctuary of Asklepios (the god of healing), where people would come to offer sacrifices to the god and to seek medical care. Marks of the imperial cult were evident, especially if some are correct in identifying the substantial Temple E as being dedicated to Augustus’s sister Octavia (though it may have been for Jupiter). The famous Hellenistic-era temple of Aphrodite atop the Acrocorinth had been rebuilt as a rather small structure during the first-century A.D. Scholars debate whether Strabo’s first-century A.D. account of 1,000 temple prostitutes refers to the earlier Hellenistic temple of Aphrodite or to the Roman one of Paul’s day; the former seems more probable (Strabo, Geography 8.6.20c; see also Athenaeus, Deipnosophistae 13.573c–574c). In any case, in Roman times wanton sexuality would have been common at such a port city.

First Corinthians covers a number of topics (see Key Themes, below). One theme emerges from these discussions, however, as Paul’s dominant concern. Paul wants this church, divided because of the arrogance of its more powerful members, to work together for the advancement of the gospel. He wants them to drop their divisive one-upmanship, build up the faith of those who are weak, and witness effectively to unbelievers.

Corinth sat on the isthmus connecting the Greek mainland with the Peloponnesian peninsula. This location made it a flourishing crossroads for sea traffic between the Aegean region and the western Mediterranean. It was a place where many cultures and religions mingled. Since it was a Roman colony, Roman law and customs were important, particularly among the upper classes, but “many ‘gods’ and many ‘lords’ ” found a home in Corinth (1 Cor. 8:5). The worship of these gods was fully integrated into governmental affairs, civic festivals, trade guilds, and social clubs, and everyday life in general. Corinth was also a destination for traveling professional orators who charged a fee for attendance at their entertaining rhetorical displays and advised people on how to advance socially.

Paul settled in Ephesus for three years (Acts 20:31) and at some point wrote to the Corinthians the otherwise unknown letter that he mentions in 1 Corinthians 5:9. It is not known what prompted the letter but it dealt with sexual immorality, a persistent problem for the Corinthian church (1 Cor. 5:1–13; 6:12–20). Sometime later, Paul received an oral report indicating that the Corinthians had not only misunderstood his first letter (1 Cor. 5:10) but were plagued with serious problems of division, sexual immorality, and social snobbery (1 Cor. 1:10; 5:1; 11:18). Around the same time, a letter arrived from the Corinthians that displayed considerable theological confusion about marriage, divorce, participation in pagan religions, order within corporate worship, and the bodily resurrection of Christians (1 Cor. 7:1; 8:1; 12:1; 15:12, 35).

At the root of much of the immorality and idolatry in Corinth, moreover, lay a lack of appreciation for the holiness that God requires of his people. Though the particulars of the Mosaic law were no longer to define the boundaries for God’s people (1 Cor. 7:19), the law’s underlying theme that God’s people were to be “set apart”—a people marked off from their culture—remained in place (1 Cor. 5:1–2, 13; 7:19; 10:1–5). In addition, the dwelling of God’s Spirit within each believer (1 Cor. 6:19) and the new unity that believers have with the resurrected, living Christ (1 Cor. 6:14–17; 15:30–34) implied that the Corinthians needed to make a clean break from the moral impurity of their culture.