Discover the Basics of the Book of 1 Thessalonians

This introductory course is designed to provide key insights into the book of 1 Thessalonians by pulling together a number of key resources: overview videos from Fast Facts and The Bible Project, helpful contextual information from The ESV Study Bible, commentary recommendations from The Gospel Coalition, a single sermon that sums up the book from beginning to end by Mark Dever, and much more. By watching, listening to, and reading these resources, you’ll be better prepared to read, study, teach, or preach the book of 1 Thessalonians.

Paul is widely regarded as the author of 1 Thessalonians, as evidenced by how compatible the vocabulary, style, and theology are with his other letters. The mention of Silas (“Silvanus”) and Timothy as co-senders (1 Thess. 1:1) may indicate Paul’s care to present the missionaries as a united band in order to offset any Thessalonian disappointment that Paul had not come to visit them again but had sent Timothy instead (see 1 Thess. 2:17–18; 3:1–2, 6, 11).

Most scholars today date 1 Thessalonians to A.D. 49–51, early in Paul’s 18-month stay in Corinth during his second missionary journey (Acts 18:1–18). Only a small minority of scholars, who do not regard Acts as historically dependable, place it in the early 40s A.D. The Delphi Inscription—a letter from the emperor Claudius to the city of Delphi—dates Gallio’s proconsulship of Achaia to A.D. 51–52, and Acts 18:12–17 mentions Gallio, toward the end of Paul’s Corinthian stay.

First Thessalonians is an informal epistle that contains all of the usual ingredients of NT epistles. It is a public letter in the sense of being addressed to a whole group, but at many points it reads more like a personal letter to an individual, as it highlights the relationship between author and recipients. The purpose of letters is usually to inform, and this letter informs the Thessalonian church about Paul’s feelings toward them, events in his own life, and Christian doctrine and practice.

Distinguishing literary features include: a strong apologetic and autobiographical element; exuberant expressions of thanksgiving for people who are living the Christian life correctly; repeated direct addresses to the recipients of the letter; extended teaching on the second coming of Christ, so that even some of the moral exhortations are related to that doctrine; and the conclusion of each chapter with a reference to Christ’s second coming.

Thessalonica was the proud capital of the Roman province of Macedonia and had a population of over 100,000. Its natural harbor and placement on the busy east-west Egnatian Way as well as key north-south trade routes meant that it was a flourishing center of trade and philosophy. It was a free city and was governed by local officials called “politarchs” (cf. Acts 17:6, 8). Religiously, the city was committed to the Greco-Roman pantheon and the imperial cult; Egyptian cults were also prominent. There was a sizable population of Jews in Thessalonica (Acts 17:5). 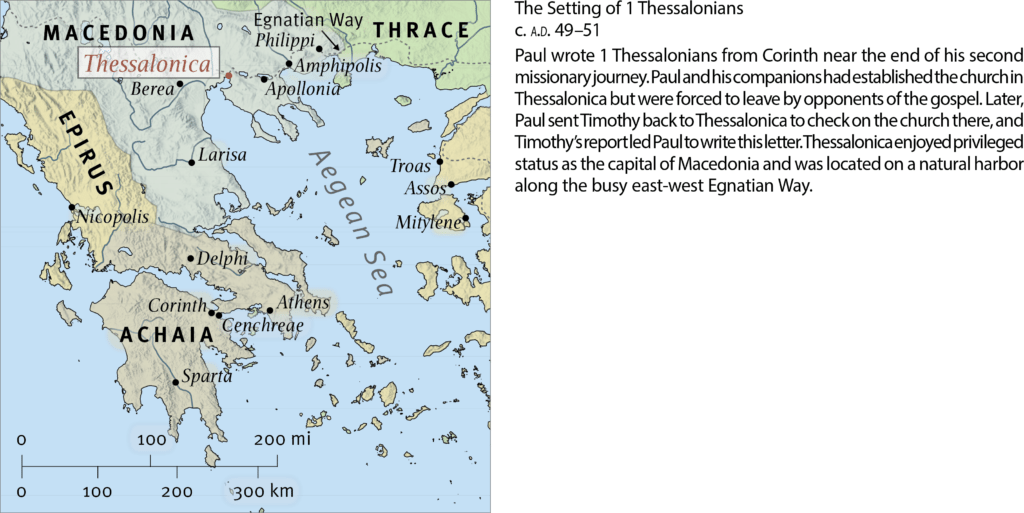 Paul, Timothy, and Silas preached in the Thessalonian synagogue over three Sabbaths, and a number of Jews and God-fearing Gentiles believed (Acts 17:4). First Thessalonians 1:9–10 suggests that Paul subsequently spent some weeks ministering fruitfully to pagan Gentiles. However, rioters instigated by Jewish opponents dragged Jason (Paul’s host) and some other Christians before the politarchs and charged them with sedition against Caesar (Acts 17:5–8), forcing the missionaries to leave Thessalonica prematurely (Acts 17:9–10). Paul was concerned for the new Christians, and therefore a few months later he sent Timothy back to Thessalonica (1 Thess. 3:1–2, 5; see ESV Study Bible note on Acts 17:15). Catching up with Paul in Corinth (Acts 18:5), Timothy updated him on the Thessalonian church (1 Thess. 3:6).

Timothy reported that generally the church community was doing well. However, not everything at Thessalonica was rosy. Some members of the church had died (1 Thess. 4:13), and because they were not fully informed about what would happen to deceased Christians at Christ’s return (1 Thess. 3:10; 4:13), some apparently thought that those who had died would miss out on the second coming, and they had plunged into hopeless grieving for them (1 Thess. 4:13).

In addition, Timothy related to Paul a Thessalonian question about the timing of the day of the Lord (1 Thess. 5:1–2). A number of scholars believe that the query reflected restless impatience or a false sense of security, but this view is countered by Paul’s repeated assurances in 1 Thessalonians 5:4–5, 9, along with the lack of threat or warning in 1 Thessalonians 5:1–11. Paul reassures the Thessalonians that they are destined not for wrath but for salvation on the day of the Lord. Some think that the Thessalonians were concerned that they would be unprepared for Jesus’ return, but 1 Thessalonians 4:3–8 suggests that they were not concerned enough about holy living. Perhaps the simplest explanation is that these new Christians were questioning their own final salvation in view of the recent unexpected deaths (1 Thess. 4:13). They may even have wondered whether the deaths were an expression of divine disapproval.

Whatever the specifics, clearly the Thessalonians needed reassurance about those who had died (1 Thess. 4:13–18) and about their own destiny at the second coming (1 Thess. 5:1–11).

The Thessalonians seem to have been vulnerable in other ways too. They had not expected the initial persecution to continue unabated for so long (1 Thess. 3:3–4; cf. 2 Thess. 1:5–7). Moreover, they missed Paul, apparently disappointed that he himself had not yet returned to see them (1 Thess. 3:6–10).

Yet another problem in Thessalonica demanded Paul’s attention: some Christians were bringing the church into disrepute by depending on wealthier Christians to provide for them rather than earning their own living (1 Thess. 4:10b–12; 5:14; cf. 2 Thess. 3:6–15). It is possible that this problem was a result of the Thessalonians’ erroneous thinking about the future. However, it may simply be that some church members were selfishly and lazily exploiting the charity of wealthier members to avoid having to work.

When Paul heard Timothy’s generally positive report, he was filled with joyful relief and was eager to encourage the embattled and discouraged Christians and to answer their questions. So he immediately began composing 1 Thessalonians (1 Thess. 3:6–8). Paul’s main purpose was to repair the hope of the Thessalonian Christians in the wake of the unexpected deaths of people in their congregation and to reassure them that both the dead and the living were destined to be saved at the second coming (1 Thess. 4:13–5:11). Related to this was his desire to reassure the Thessalonians that they were among those elected by God for salvation (1 Thess. 1:4; 5:24).

Paul also wished to underline the missionaries’ authenticity as preachers of the gospel of God (1 Thess. 1:5; 2:1–12; 2:17–3:10) in the face of real or potential questions relating to his lengthy absence (1 Thess. 2:17–3:10), the unrelenting persecution (1 Thess. 3:3–4), and the unexpected deaths (1 Thess. 4:13). Paul also sought to encourage the Thessalonians by explaining that persecution is normal for the Christian (1 Thess. 3:3–4). In addition, Paul is calling the recently converted, predominantly pagan community to sexual holiness (1 Thess. 4:3–8) and the idle members of the community to gainful employment (1 Thess. 4:9–12).

It also seems that Paul is seeking to undo their heavy dependence on him by urging the church to respect and defer to its own ministers (1 Thess. 5:12–13). This can be seen in his forbidding the despising of prophesying (1 Thess. 5:19–22), his emphasizing Timothy’s credentials (1 Thess. 3:2), and his presenting the missionaries as a team (hence the use of the first person plural through much of the letter).

Christians should look back on the accomplished salvation of Christ, which fulfills OT promises, and look forward to the second coming, which consummates the promises.