In the springtime, the fields surrounding the ancient site of Ephesus are flecked with blood red, the color of the wild poppies that thrive in the Mediterranean climate. The day we visited, my son chased lizards around fallen fluted columns and scoured for fragments of pottery in the agora where Paul might’ve picked up a loaf of bread for dinner, or Prisicilla and Aquila might’ve bought fabric for their tent-making business. We took a family road trip to Ephesus because we wanted our kids to walk on the streets where some of the events, recorded on the New Testament’s pages, actually took place.

Christianity is a faith forged in real time, in real places, animated by real people whose histories have been written and preserved for us. Consequently, a lingering material culture testifies to the lives of those who carried the story of Jesus to the corners of the world.

In Epic: An Around-the-World Journey through Christian History, Tim Challies—pastor and blogger at Challies.com—invites readers to accompany him on an adventure to find key artifacts that tell the story of Christianity through the centuries. As soon as I leafed through the first few pages, I knew I’d be reading his book aloud with my children. Each short chapter features one object that reflects an important development in church history, his personal reflections on the meaning and significance of each object, and photographs and maps (Indiana Jones style!) that track his travels. 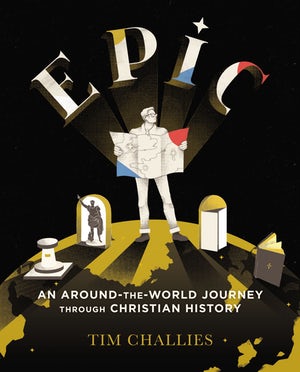 Thirty-three fascinating objects. One amazing story. Join author and pastor Tim Challies as he embarks on a three-year journey spanning multiple continents and some of the most unusual places in the world. Tim introduces you to 33carefully selected objects that help you understand the long and complicated history of Christianity in a unique and creative way.

I’m bound to be a fan of any writer who wants to help evangelicals acquire a sense of our place within a story that spans two millennia. Challies’s narration includes some of Christian history’s greatest hits: Luther’s courageous “Here I stand”; Charles Wesley’s unforgettable hymn “And Can It Be?”; William Carey’s rousing call to mission, “Expect great things from God; attempt great things for God.” Since the Protestant Reformation, the Great Awakening, and the missionary movement of the 18th and 19th centuries gave evangelical Protestantism its character, it’s not surprising that most of the objects selected reflect these movements.

Christianity is a faith forged in real time, in real places, animated by real people whose histories have been written and preserved for us.

Of 33 artifacts chosen to tell the story of Christian history, 20 are found in Europe, eight in North America, while single entries representing Africa, India, China, and South America all reflect the missionary efforts of Europeans. This is church history told from a particular vantage point—a European one. Since the book is billed as an “around-the-world journey,” I was hoping Challies’s destinations would reflect more geographic diversity. Most notably absent were objects from the Middle East, where Christianity was born and thrived for a millennium.

Cultural and chronological proximity is a powerful force that tends to blind us to the stories of those more distant. In The Christian World: A Global History, historian Martin Marty reminds us:

The first episode of Christian presence began with Jesus and Paul and company in Asia, where for hundreds of years the believing community was extensive and vital. . . . The followers of “The Way” were first named “Christian” at Antioch in Syria, which meant in Asia.

Historian Philip Jenkins has also documented the 1,000-year golden age of the church in the Middle East and North Africa in The Lost History of Christianity. Ephesus, along with Jerusalem, Antioch, and Edessa, were urban centers on the continent of Asia where churches were planted and flourished for centuries. The North African city of Alexandria and the Cappadocian region of Asia Minor were home to church fathers like Athanasius, Gregory Nazianzus, and Basil the Great, theologians who refined Trinitarian doctrine that sets the standard for orthodox belief today.

Telling the story of “global” Christianity without them is telling only part of the story. And yet, the five entries Challies dedicates to the first 1,400 years of Christian history log visits to Rome, the United Kingdom, and Ireland—all European, not Asian, destinations.

As a Canadian English-speaking, Protestant pastor and writer, it’s understandable that Challies gravitates to the era of church history that has most informed his faith. As a result, he hits his stride in the era of the Reformation. Three main themes lace themselves through his meditations on various artifacts like the Gutenberg Bible, Jan Hus’s cell door, and William Brewster’s chest: the Bible is trustworthy and true, Christians remained faithful through terrible persecution and pain, and in the face of extreme opposition the church grew and flourished thanks to an uncontainable missionary impulse.

Two Reformation rallying cries run through the book—sola scriptura and sola gratia—emphasizing that Scripture alone is a sufficient foundation for Christian faith and grace alone is the ground of our salvation. As if to underscore the essential nature of Scripture to the vitality of the church through the ages, many of the objects Challies hunts down are Bibles. John Ryland’s Manuscript, the Book of Kells, the Gutenberg Bible, Erasmus’s New Testament, and the King James Bible all find their way into his collection.

As if to underscore the essential nature of Scripture to the vitality of the church through the ages, many of the objects Challies hunts down are Bibles.

Challies’s stories and approach charmed me as I tracked with him through history. The book is, in essence, a Protestant pilgrimage, although I suspect he’d shy away from that characterization. As James K. A. Smith observes in On the Road with Augustine,

Christians are not just pilgrims on a sacred march to a religious site; we are migrants, strangers, resident aliens en route to a patria, a homeland we’ve never been to. God is the country we’re looking for, “that place where the true consolation of our migration is found.” (51)

Open Air of the Journey

It’s encouraging to meet Christian pilgrims who’ve walked this rough road before us—who are now among the great cloud of witnesses cheering us on. And so I’ll be reading Epic with my kids because I want them to encounter John Bunyan and his brave blind daughter, Mary. I’m anxious for them to meet Marie Durand and learn of her steely refusal to deny her faith despite decades of imprisonment. I want them to know of George Müller’s expansive faith that trusted God would provide for thousands of orphans in his care.

If the sudden contraction of your horizons during the coronavirus pandemic has left you feeling claustrophobic, Challies invites you to come breathe sea air on the Scottish island of Iona in search of place where the Book of Kells was illuminated; to linger at the Lutherhaus museum where Martin Luther composed his Ninety-five Theses that sparked a reformation; to trek through Zambia to find David Livingston; to speed through the Chinese countryside on a bullet train to visit the graves of Hudson and Maria Taylor.

It’s deeply encouraging to meet Christian pilgrims who have walked this rough road before us—who are now among the great cloud of witnesses cheering us on.

Schools are closed. Businesses shuttered. Sports practices suspended. All the activities that contribute to the energetic hum of American life have been canceled in an effort to slow the spread of coronavirus. Around the world, “shelter at home” orders remain in effect. There’s nowhere we can go around here. What better time to read about an epic journey through church history?

Come on a journey and “listen to these voices of the past tell us the epic story of what God has done and continues to do in our world today” (9).

Tina Boesch (MA theology, Regent College, Vancouver) is manager of adult ministry publishing at LifeWay Christian Resources. She’s currently based in Baton Rouge, Louisiana, with her family. She is the author of Given: The Forgotten Meaning and Practice of Blessing (NavPress). You can find more of her writing at tinaboesch.com and follow her on Twitter.