Recently I watched a man berate a beleaguered-looking cashier over something beyond her control. His insulting tone was still ringing in my ears when I read about the catastrophe unfolding in Yemen, where a staggering 8 million people are on the brink of starvation. This crisis is getting worse, but national attention in recent weeks has been riveted on the fallout from the Kavanaugh hearings, an excruciating drama that only intensified partisan division.

What if lack of civility, indifference to suffering, and political rancor are somehow connected? What if they’re all related to a loss of appreciation for human dignity?

Enter Daniel Darling’s new book, The Dignity Revolution: Reclaiming God’s Rich Vision for Humanity. I didn’t need Darling to tell me that we live in a world of daily assaults on human dignity—it’s written all over the headlines. But I did need him to give me hope that we can forge a meaningful path through the present divisions.

The Dignity Revolution presents a reasoned and passionate call to rediscover the dignity invested in every human being. In the first three chapters, Darling lays biblical groundwork for an understanding of human dignity grounded in the gospel. Beginning with creation, he demonstrates that men and women are imbued with indelible dignity and worth because they’re created in God’s image.

The Dignity Revolution presents a reasoned and passionate call to rediscover the dignity invested in every human being.

Dehumanization is a consequence of sin that distorts that image. Only Jesus Christ—as the image of God—has perfectly embodied what it means to be an image bearer; indeed, “his life, death, and resurrection . . . hold out to us the offer of being remade as the humans we should be” (27). Through Christ our broken humanity can be fully restored. And once renewed, we carry the responsibility of reflecting God’s image into the world by caring for creation, loving our neighbors, and filling the earth with God’s glory.

The New York Times columnist David Brooks recently observed that “today’s social fragmentation didn’t spring from shallow roots. It sprang from worldviews that amputated people from their own depths and divided them into simplistic, flattened identities.” Christianity, Darling contends, is the worldview that best provides a moral and spiritual foundation for appreciating the dignity of each person and working to healing the fractures within society. 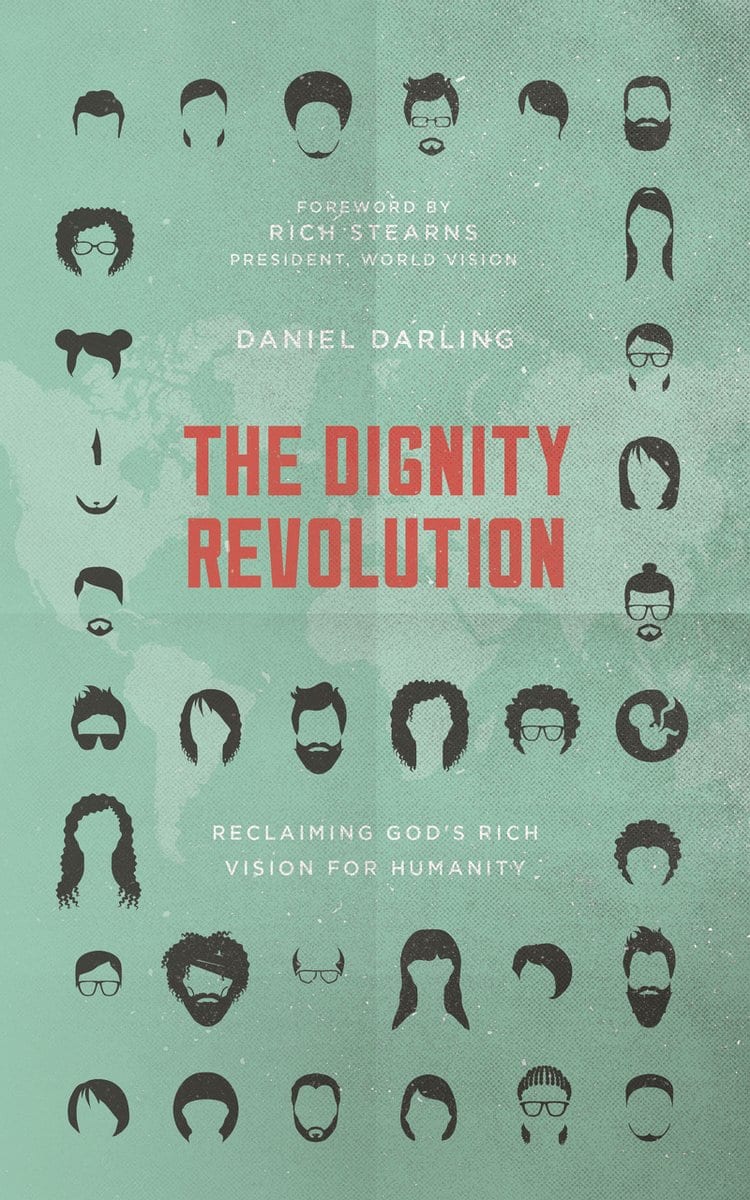 As Christians, we want to make a difference in this world. We want to have an effect not only on our immediate family and community, but also on wider social issues. We want to protect the vulnerable and engage with the issues that really matter. But how?

This book shows us how wonderful, liberating, and empowering it is to be made in God’s image. It will change how we see ourselves and other people.

Darling’s book is a robust apology for spirited Christian activism that prioritizes respect for human life. He suggests that a deficient understanding of human dignity harms the church’s ability to live out both the Great Commission (the call to make disciples of all nations) and the Great Commandment (the call to love our neighbors).

Since the church bears the task of communicating and illuminating the gospel—proclaiming the good news and showing the world glimpses of the kingdom through acts of mercy—these activities are complementary and inseparable. Divorcing proclamation from ministries of care, healing, and justice impoverishes our witness. As Darling explains, “We grasp the full and radical nature of the gospel when we stop seeing communication and illumination as two warring Christian camps, and [rather] view them both as part of the radical mission of the church, seeing both as results of the personal and cosmic fruits of Christ’s inaugurated kingdom” (56). It’s significant that Darling identifies these tasks as fruits of the kingdom, not as means to enter it.

A recovery of human dignity is unlikely to resolve all political disagreements, but it may change the tone of the conversation.

While Darling sees Christian activism that upholds the dignity of every human being as an implication of the gospel, he makes clear that social justice is not a definitional component of it. Moreover, he reminds us that “the work of the gospel in bringing sinners to new life and changing sinners to be more and more like Jesus is the fullest expression of dignity for humans” (54). Social activism, then, is a fruit of the spiritual transformation of image-bearers through Christ; but it’s no substitute for the gospel.

Transcending Politics? No . . . and Yes

Darling hesitates to identify his book as political. “This isn’t a book about politics,” he insists (17, 202). And yet advocating for the value and protection of human life is bound to have implications for public policy. More than half of the book is devoted to considering the outworkings of a biblical understanding of human dignity, and in many cases the issues discussed are political minefields—racism and white supremacy, abortion, physician-assisted suicide, eugenics, immigration, criminal justice, gender and sexuality, and religious liberty.

Certain policy positions on these issues are consistently associated with either right or left. The dignity of unborn babies is championed by the right while the dignity of the poor and refugees is championed by the left. But Darling asks why Christians should have to choose between recognizing the dignity of one group of people over another—politics shouldn’t be a zero-sum game. He invites us to suspend our uncritical alignment with one party or another and instead look at these issues through the lens of dignity.

A recovery of human dignity is unlikely to resolve all political disagreements, but it should change the tone of the conversation. We’re less likely to demonize those on the other side of an issue when we remember that they, too, are made in the image of God.

What Sort of Revolution?

Revolutions tend to be chaotic and violent, but Darling is calling for a quiet revolution. This quiet revolution “begins with applying the kingdom ethics of dignity and service within our own hearts” (61). It’s fomented in conversations at our dinner tables, and it gains momentum in our churches and communities when we’re intentional about meeting, befriending, and talking with people across racial, social, and political lines.

If we truly grasp the significance of a biblical understanding of human dignity, it’ll affect all of our relationships. “For every argument we make online or in the office of a public official, there are hundreds of interactions in our daily lives that test whether we really think every person is made in God’s image. Human dignity is more than a platform; it’s a way of life” (212). Here in our personal, everyday interactions, Darling’s call to a quiet dignity revolution is likely to have the most lasting effect. But it will affect our politics as well.

“Imagine,” Darling urges, “a political system where we hold loosely to our tribes, but hold firmly to our broken-heartedness about the vulnerable, our theology of human dignity, our hope in the power of the Spirit to change people, systems, and nations, and our pursuit of the true, and good, and beautiful” (209). I want to imagine a politics like this, but I keep wondering how to realize this vision within a rigid two-party system. Darling’s non-partisan vision is attractive in its idealism, but I couldn’t help but wonder if it’s realistic.

It’s one thing to imagine a politics founded on a robust Christian doctrine of human dignity; it’s another thing to live it out in our polarized society. But doing so may well be the key to retaining a vibrant Christian witness in our world, the sort of witness that actively seeks the restoration of souls and bodies, the healing of hearts and communities.

Tina Boesch (MA theology, Regent College, Vancouver) is manager of adult ministry publishing at LifeWay Christian Resources. She’s currently based in Baton Rouge, Louisiana, with her family. She is the author of Given: The Forgotten Meaning and Practice of Blessing (NavPress). You can find more of her writing at tinaboesch.com and follow her on Twitter.