The resurgence of Calvinism in our time, in addition to drawing the attention of national daily newspapers and weekly news magazines, has stirred the attention of evangelical Christian observers not in sympathy with the resurgence. Journalistic ink has been expended documenting polarization, particularly among Southern Baptists. The perceived excesses of today’s Calvinist resurgence have drawn sharp comment in the blogosphere from observers such Scot McKnight and Roger Olson. The latter, clearly cool toward today’s resurgence, has nevertheless called on Wesleyan-Arminian evangelicalism to match the new Calvinist world in its zeal for proclaiming a doctrinally meaty Christianity.

Don Thorsen’s recent literary effort, Calvin vs. Wesley: Bringing Belief in Line with Practice, ought to be viewed in this context. It is a call for a Wesleyan resurgence among Methodist and what might be called “non-aligned” American evangelicals—a constituency in which there is a need both for doctrinal zeal and also for energetic living out of the Christian faith. But while “of a kin” with these other commentators, Thorsen, professor of theology at California’s Azusa Pacific University, brings to the literary task a genuine regard for John Calvin. In making his case that, taken all in all, today’s evangelical Christianity has more to learn from John Wesley (1703–1791) than from John Calvin (1509–1564), he is careful not to take “potshots” at the Genevan. Calvin is portrayed as a “giant,” as a Protestant “father” whom we ignore only to our own hurt. Thorsen is a Free Methodist whose own theological training exposed him to the Reformed theological tradition (as represented by Princeton Seminary) as well as to the broad Methodist heritage.

Evangelical Calvinists and evangelical Methodists can always benefit from the insights of the sympathetic outsider who gazes into their tradition from the margins. Calvinist readers of Calvin vs. Wesley: Bringing Belief in Line with Practice will be repeatedly struck by observations offered by Thorsen, the sympathetic outsider. For example: what do we make of his observation that whereas for John Wesley divine love was the “darling attribute” of God, God’s love never received comparable prominence in the thought of the Genevan reformer (11)? While I would question the wisdom of Wesley’s preference and be inclined to suspect the preference engendered theological problems of its own, this concern doesn’t take away from the fact the Calvin and the Reformed tradition may have underemphasized the place of love among the divine attributes. As a Presbyterian, I’ve often asked myself why love isn’t named among the divine attributes summarized in Westminster Shorter Catechism Q.4, “What is God?” All this to say that the evangelical Calvinist who reads Calvin vs. Wesley will be provoked to think about some things in the Reformed tradition differently.

But there are difficulties in Calvin vs. Wesley that will not go away. These don’t have to do with a lack of goodwill on the part of Thorsen. The difficulties have to do first with methodology. How, in a calibrated way, does one go about comparing the ideas of a Christian leader of the 16th century with one of the 18th century, especially if it’s granted that each stands at the head of a branch of the Christian family that has been subject to modification over time? If it be granted that Calvinism underwent conscious adaptation after Calvin’s own era, and that Methodism underwent similar changes after Wesley (with the result that neither tradition holds exactly what the founders held), then what’s the point of Thorsen’s Calvin-Wesley comparison? What Calvin himself thought about a particular theme (let’s say church-state relations, the theme of chapter 7) and what Wesley thought about it is a mere curiosity unless one holds that the followers of these men have no option but to uphold their views. Thorsen himself doesn’t believe this to be the case. His whole experience of the Wesleyan-Holiness tradition has been in a “free church” context, whereas Wesley to the time of his death maintained a personal loyalty to the established Church of England. Neither Calvinism nor Methodism is just as it was at its origin. And that isn’t necessarily a bad thing. 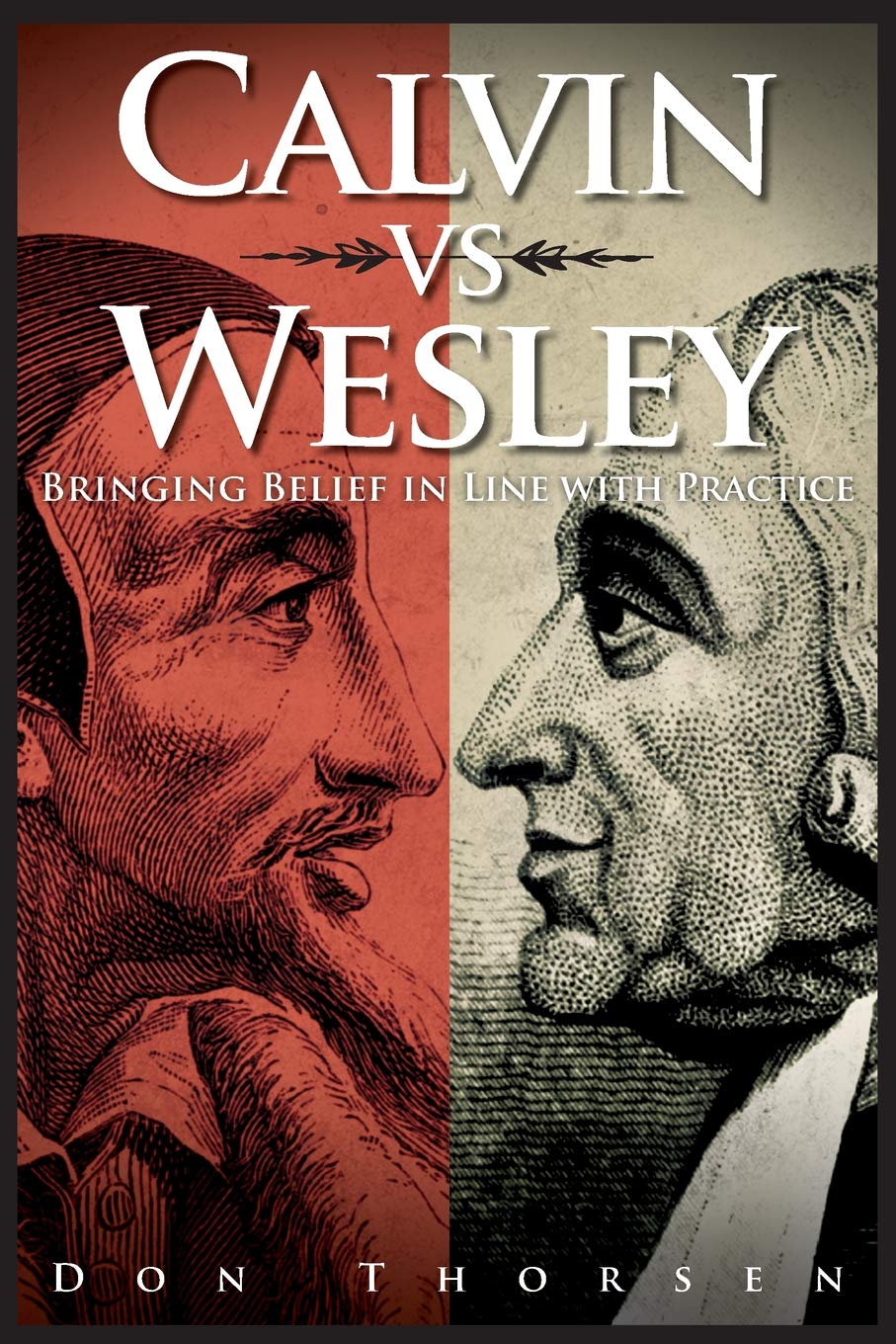 Calvin vs. Wesley: Bringing Belief in Line with Practice

Calvin vs. Wesley: Bringing Belief in Line with Practice

Second, the book displays the closely related difficulty of inexact comparison. Thorsen wishes to portray Calvin and Wesley as representative of “types” of Christianity that remain, more or less, in the Christian world as “live” tendencies between which we must choose. Calvin, by this reckoning, represents an authoritarian, “top down” Christianity in which ordained leaders are predominant; Wesley is portrayed as representing a more “relational” Christianity within which authority devolved to local “societies” or “bands” (our “cell groups”). Calvin is described as unsupportive of the ministry of women (111), whereas Wesley took a different view (114). Calvin is portrayed as primarily concerned with ministry of the Word (107), Wesley with a concern for social ministry to the needy (114).

But to such comparison-drawing several objections arise. Was Calvin actually domineering? Wesley biographers consistently note the authoritarian tendencies of this evangelical leader; the devolved “societies” and “bands” were utterly answerable to Wesley. And relational Christianity didn’t await the age of Wesley. Martin Bucer (1491–1551) is called the “father of Pietism” because he was emphasizing the cell group in Strasbourg in the earliest decades of the Reformation. Historian Gordon Rupp has shown that lay religious devotional societies were a common feature of the spiritually dark late 17th-century era we call the Restoration. Wesley’s zeal for social ministry is properly recognized by Thorsen, but Calvin’s championing of the needs of refugees and the poor through the Genevan diaconate go unrecognized. It’s plain there were differences between Calvin and Wesley. The question, however, is whether these are best explained by temperament, by the “zeitgeist” of their times, or some combination of the two. Oversimplification in the drawing of contrasts is unhelpful.

Third, Calvin vs. Wesley illustrates the limitations of a predominantly theological comparison of the careers and influence of these two Christian leaders. Thorsen has certainly read his Calvin and his Wesley; the footnotes demonstrate the extent to which he’s familiar with the writings of both. But the footnotes tell an additional tale. One finds an underfamiliarity with the secondary literature so critical for understanding the careers of the two leaders themselves and the movements they helped to nurture. A few examples make concrete what’s at stake. As to Calvin and gender, Jane Dempsey Douglass’s Women, Freedom, and Calvin (1985) illustrates that, in the context of his century, Calvin’s thoughts on women were on the progressive side. Rather than antinomian tendencies among converts being traceable solely to predestinarian ideas (as Thorsen is ready to imply in chapter 6), Stephen Gunter’s The Limits of ‘Love Divine’: John Wesley’s Response to Antinomianism and Enthusiasm (1989) demonstrates the ongoing threat antinomianism was within the Methodist movement (and indeed Wesley’s own family circle) where the suspect predestinarian thinking was shunned. Wesley’s theological position is repeatedly termed “Anglo-Catholic” when this term is widely understood to apply to a ritualistic and moralistic form of Anglicanism quite distinct from evangelicalism. Studies such as Robert Monk’s John Wesley: His Puritan Heritage (1966) are more surefooted guides to the stream in which Wesley stood.

All this is to say that while Calvin vs. Wesley stands as an irenic example of how one can profitably look across the Wesleyan-Calvinist divide, it could have been a much better book.