Decades ago I spent a year investigating the growth and expansion of monasticism from the deserts of Egypt to Ireland’s rugged west coast, from the Benedictine stronghold of Monte Cassino to the northwestern European sites associated with the Cistercians. My supervisor (a Jesuit medievalist) was a university historian teaching with the permission of his monastic superior. The challenge lay in the fact that as an evangelical believer, I lacked conversation partners who—sharing my convictions—were also reading historians of medieval monasticism such as R. W. Southern, David Knowles, and Jean Leclerq. Who did I know that was also attempting the “feat” of learning both to admire exemplary monastics (Bernard of Clairvaux, for instance) and critique some unwholesome emphases found in monastic movements? There was no one.

What a difference a few decades have made. Now, Christian antiquity and ancient Christian spirituality are much more often “hot topics” among evangelicals than at any time in memory. Whereas earlier one had no choice but to take as guides the Roman Catholic historians of monasticism and European medievalists, today one can find Protestants writing in this field. Names such as D. H. Williams (Baylor) and John Van Engen (Notre Dame) come to mind. Evangelicals researching monasticism and spirituality do not labor so solitarily today. And now, in this stream of things there appears in rapid succession two books by the same author—Reforming the Monastery and The Story of Monasticism.

Greg Peters, who is an Anglican (Church of North America) minister and historian of Christian spirituality at Biola University, works to break new ground in several respects. It’s not just that he enters this terrain as a person of broadly Protestant sympathies, but that he tackles the subjects before him ambitiously.

My fallback history of monasticism has always been that of the late David Knowles’s Christian Monasticism. Its advantage was obvious: it was a treatment of 1,500 years of monastic life from a Benedictine who had transitioned from abbey to two Cambridge University history chairs. But it’s not my fallback anymore. The Story of Monasticism, among its other virtues, pays fuller attention to the monasticism of the desert, demonstrates the Benedictine Rule’s only gradual supremacy in Europe, extends its survey of early monasticism into the East of Basil and the Cappadocians, and makes an honest attempt to discuss discouraging developments in monastic history in the half-century since Vatican II (1962–65).

Peters isn’t a historian of monasticism in the classic style (like those named above); he’s a historian of Christian spirituality. He explores the motivations and convictions that drove this movement. Peters’s approach slights factors in Mediterranean and European society that, while not part of the history of spirituality, still impinged on monastic recruitment and the management of monasteries. We read of the accession of Constantine as Emperor in AD 312 and the subsequent toleration of Christianity among other religions (53), yet Peters shows no interest in how monastic recruitment may have been accelerated by the laxity that followed the influx of nominal Christians into the churches.

We also read of the harmful medieval encroachment of lay “commendators” (114–116) into the management of monasteries; yet we find no investigation of whether this feudal pattern was a response to the felt insecurity stirred by the sporadic raids of the Norsemen. Male and female recruits to monastic houses were seldom drawn from the poorest elements of society; they were generally at least from middle-income families. But what role was played in monastic recruitment by inheritance laws of the time, under which property was bequeathed to the oldest male (leaving little for younger siblings)? And how many women entered convents because society had no honorable places for the unmarried and the widowed? What were the repercussions both for temporal rulers of Western Europe and for the church of the election of monks to the papacy, beginning in 1073? 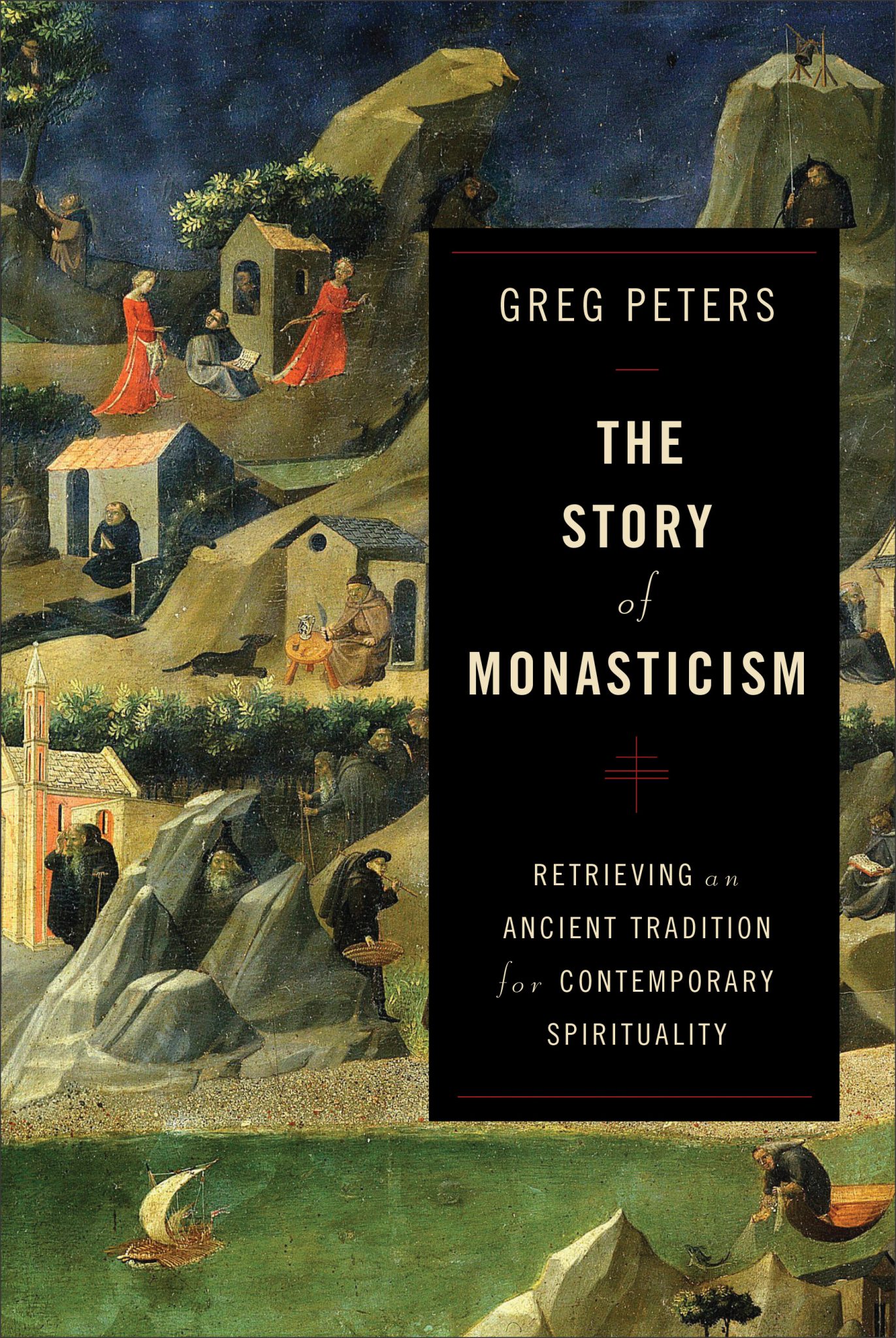 The Story of Monasticism: Retrieving an Ancient Tradition for Contemporary Spirituality

The Story of Monasticism: Retrieving an Ancient Tradition for Contemporary Spirituality

Some evangelicals perceive monasticism as a relic from the past or a retreat from the world, or they reject it as an aberration in Protestant circles. At the same time, contemporary evangelical spirituality desires historical Christian manifestations of the faith. In this accessibly written book, an expert in monastic studies offers a historical survey of monasticism from its origins to current manifestations. Greg Peters recovers the riches of the monastic tradition for contemporary spiritual formation and devotional practice, explaining why the monastic impulse is a valid and necessary manifestation of the Christian faith for today’s church.

For such reasons I would typify The Story of Monasticism with its companion, Reforming the Monastery, as “apologias”—formal defenses or justifications. These represent a skillful retelling of the monastic saga with a view to encouraging the evangelical church to identify afresh with the monastic story (a story evangelicals have perennially distrusted). Accordingly, each chapter of The Story of Monasticism concludes with an effort to encourage this kind of appropriation, even if this begins only with a visit to a monastery or participation in a monastic retreat. My own opinion is that Peters, recognizing the uphill battle he faces in telling the story in a way that’ll disarm longstanding Protestant prejudices, sometimes strains too hard at his task.

One may ask, “Where’s the New Testament support for monastic life?” Peters isn’t content to point to Jesus’s ennobling of Christian singleness for the kingdom (Matt. 19:12), or the wilderness career of John the Baptist. He must go out on a limb and convince us that Paul was familiar with and supportive of a form of Christian monasticism (reflected in the 1 Corinthians 7:36–38 discussion of the wisdom of deferred marriage). He admits this is only one of four possible interpretations of the passage (The Story of Monasticism, 27). One wonders whether his favored interpretation is driven by a concern to find legitimation where none may exist.

One may also ask, “How does a Christian life composed chiefly of contemplation justify itself?” Peters asserts, by way of reply, that the historic pattern of monastic life is one of withdrawal from society so one can return to society with clarity of sight (The Story of Monasticism, 39–41). Yet the history of monasticism doesn’t uniformly demonstrate this pattern of withdrawal/re-entry—this best characterizes the new orders of friars led by Francis and Dominic at the dawn of the 13th century; they sought the public engagement earlier monks largely shunned.

Most serious of all is the omission in The Story of Monasticism of any reference to critiques of monasticism within Roman Catholicism. One might suppose it’s only with Martin Luther’s 95 theses in 1517 that an accusing finger had ever been pointed at monastic life and practice. In truth, however, post-1517 criticisms of monastic life and practice represent a continuation of the kind of fault-finding one could’ve discovered in the preceding 200 years. The monastic orders had acquired a sullied reputation for a variety of reasons, and were pilloried by writers as diverse as Geoffrey Chaucer, Giovanni Boccaccio, Lorenzo Valla, and Desiderius Erasmus (all of whom died Roman Catholic).

While this omission is lamentable, readers must remember Peters’s apologetic purpose is to reorient evangelical Protestant thinking. Then you’ll understand why he devoted a second volume (Reforming the Monastery) to demonstrating that historic Protestantism has never entirely dismissed monastic ideals as a pipe dream. As Peters effectively shows, Luther and Calvin were more concerned with monastic abuses (chief of which was the notion monastic life was salvific) than with uprooting the monastic idea entirely (ch. 1). It’s a matter of historical record that Protestant Europe had, for a transitional period, a monastic population inside its territories, not all of which embraced Protestantism.

Another chapter (ch. 2) on Anglicanism’s ongoing interest in things monastic lacks even-handedness. Continued Anglican advocacy for monasticism came from those whose churchmanship would be called “high” church and “Tractarian” by the 19th century. To call forward such witnesses as if they represent a robustly Protestant Anglicanism is unhelpful. To the evangelical mind, such witnesses are as likely to discredit the continued utility of monasticism as to commend it.

A subsequent chapter (ch. 3) encapsulates the appraisal of monasticism by 20th-century theologians Karl Barth (1886–1968) and Dietrich Bonhoeffer (1906–1945). Here we come to the most substantive and thought-provoking material offered in Reforming the Monastery. In Barth and Bonhoeffer we see the healthy mix of critique and appreciation we’ve been looking for. Bonhoeffer incorporated features of monastic life into his underground seminary at Finkenwald. In Peters’s final chapter (ch. 4) we read the same healthy blend of critique and appreciation in the writings of the late Donald Bloesch (1928–2010). Like the earlier 20th-century observers, he observed both problems and worthwhile features in the monastic tradition.

Worthy of Our Gratitude

Here are two volumes reflecting the prodigious labors of Greg Peters. He certainly deserves our thanks. The two volumes might conceivably have been one, had critical reflection on the monastic story been permitted in the main narrative. But then, such a properly critical narrative history couldn’t have functioned as an apologia, which is what we have here in two volumes.

Peters has raised the question: “Why can’t monasticism be an option for evangelicals?” A prudent answer would be: “It can’t be on the mixed foundation provided in these two volumes.”