In recent years there’s been a resurgence of interest in early Christianity. Rather than focusing just on the first century—and the accompanying New Testament writings—scholars have begun to ask more questions about the second and third centuries. What was Christianity like during this time? How was it received? How did it survive?

Recent books covering these sorts of topics include Rodney Stark’s The Triumph of Christianity (2011), Larry Hurtado’s Destroyer of the gods (2016) [read TGC’s review], and my own Christianity at the Crossroads (2017).

Bart Ehrman—distinguished professor of religious studies at UNC-Chapel Hill—has entered this discussion with his latest volume, The Triumph of Christianity: How a Forbidden Religion Swept the World. Ehrman argues that the emergence of Christianity as the victor over pagan religions in the ancient world was “the single greatest cultural transformation our world has ever seen” (4). And, consequently, there are few historical questions more important (and interesting) than how and why that happened.

After all, argues Ehrman, how did a small band of uneducated Galilean disciples lead a religious revolution that eventually conquered the world? How does a religion go from a handful of people to 30 million people in just 300 years? The book answers these sorts of questions.

Central to Ehrman’s argument is that Constantine’s conversion (which he explores in chapter 1) wasn’t the decisive factor in the triumph of Christianity, as is so often supposed. A much more important conversion happened centuries earlier: the apostle Paul. In chapter 2, Ehrman argues that Paul was foundational to the eventual triumph of Christianity because he advocated for a “salvation that was not tied to explicit Jewish identity” (72). This, in turn, opened the doors wide to the conversion of the Gentile pagan world.

Before exploring why the pagan world began to convert to Christianity, Ehrman devotes chapter 3 to the question of what pagan “religions” were like. Although they were all different, he suggests they shared the following characteristics, each of which is nearly the opposite of Christianity: (a) they worshiped many gods instead of one; (b) they were more concerned with ritual acts than with doctrine or ethics; (c) they focused on this life instead of the afterlife; (d) they were local instead of global; and (e) they operated on the basis of custom instead of books.

So how did early Christians go about converting people out of this pagan background? According to Ehrman in chapter 4, it’s because Christianity was both missionary and exclusive. Ehrman states, “One reason Christianity grows is that it is the only religion like this: the others are not missionary and they are not exclusive. These two features make Christianity unlike anything else on offer” (120).

The missionary commitment of early Christians was relatively unheard of in other religious systems. The reason isn’t difficult to find: other religions didn’t think people were “lost” if they didn’t commit to their particular deity. Indeed, pagan religions didn’t see themselves in competition with other religions. If people chose to worship a particular god, nothing prevented them from also worshiping another god. So pagans lacked a motive to try to “convert” someone to their own religion.

The combination of Christianity’s missionary heart and exclusive worship led to its eventual triumph.

Christianity, on the other hand, affirmed that only Jesus is the true God and that without him people face eternal judgment. Thus, Christians were motivated out of love for their fellow man to reach out to the world around them. And when people converted, they were told they had to give up their pagan past entirely and now give full and exclusive devotion to Christ.

So, Ehrman argues, the combination of Christianity’s missionary heart and exclusive worship led to its eventual triumph.

Pagans and the Miraculous

Are these the only reasons for Christianity’s success? In chapter 5, Ehrman pushes back against some other suggestions that scholars have made. In particular, he disagrees with Rodney Stark’s claims that Christian care for the poor and sick may have played a role in its success. Ehrman argues that Christians would’ve died in greater numbers due to their exposure to illness.

Ehrman makes a fair point, but Stark’s argument can be conceived of more broadly. It’s not just about survival statistics, but also about reasons pagans were attracted to the Christian movement. Surely the distinctive moral/ethical behavior of Christians—a feature not emphasized by their pagan counterparts—would’ve played a role in setting Christianity apart as a compelling option. 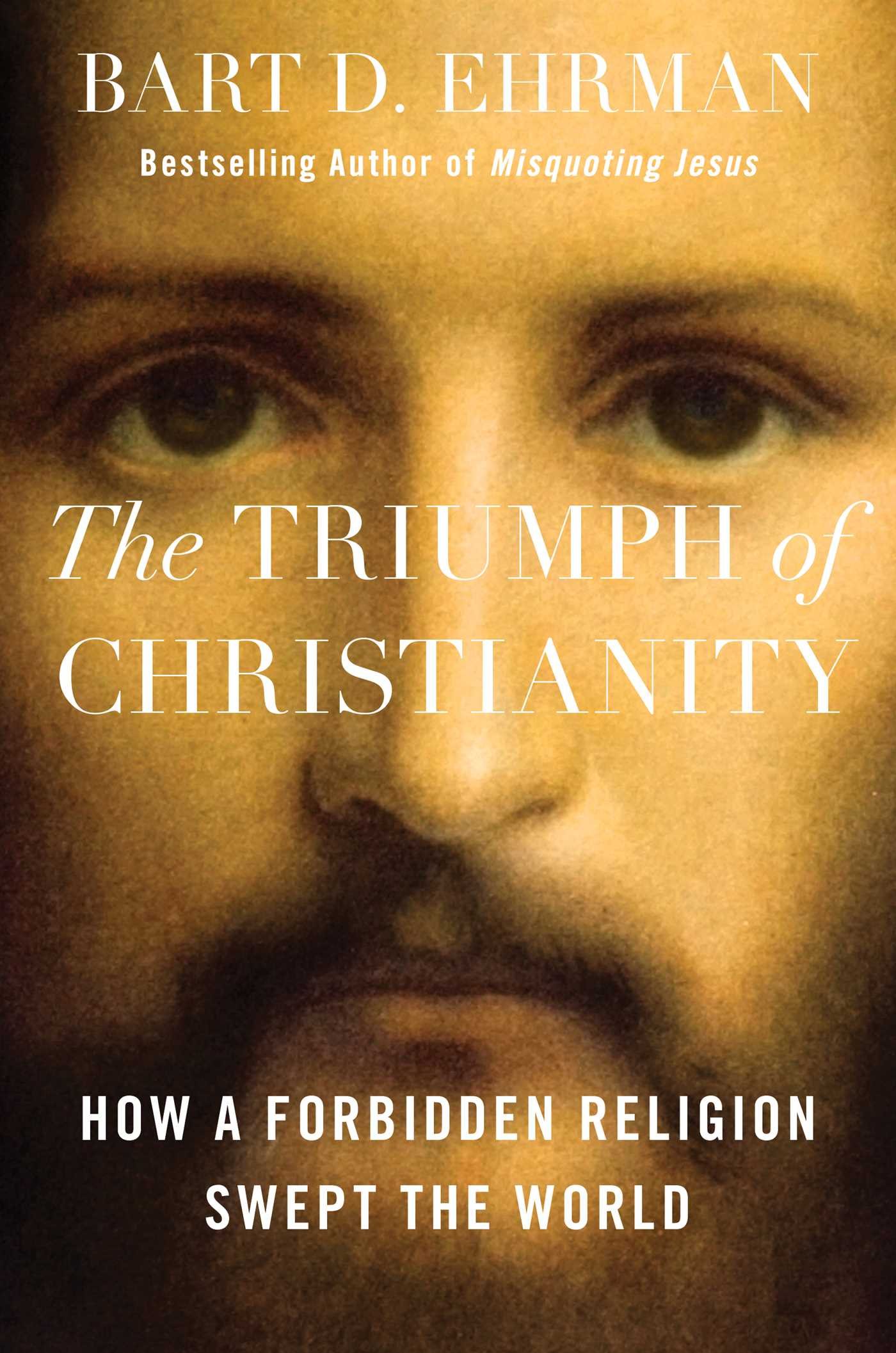 What if Christianity had remained a sect of Judaism fated to have the historical importance of the Sadducees or the Essenes? In The Triumph of Christianity, Bart Ehrman shows how a religion whose first believers were 20 or so illiterate day laborers in a remote part of the empire became the official religion of Rome, converting some 30 million people in just four centuries. The Triumph of Christianity combines deep knowledge and meticulous research in an eye-opening, immensely readable narrative that upends the way we think about the single most important cultural transformation our world has ever seen.

In place of such “practical” considerations, Ehrman argues that pagans were particularly compelled to convert because of miracles, since early Christian writings explicitly tell us this is why they were converted. In particular, Ehrman appeals to a number of different apocryphal writings (especially the apocryphal acts) that tell numerous stories of how pagans witnessed miracles and converted to Jesus on the spot.

I suppose Ehrman could respond by noting that the apocryphal acts are legendary and embellished and often inaccurate. But scholars also agree they sometimes reflect the kind of things happening in early Christianity. If that is the case, then why can’t they be used to argue that miracles, instead of just reports of miracles, were the kind of thing happening in early Christianity?

By insisting only reports of miracles are in view, one gets the impression that Ehrman might be bending the historical sources a bit here to fit his worldview. Indeed, one might even argue that real miracles would be a better explanation for the rapid spread of Christianity, as opposed to mere reports of them.

After exploring statistics related to Christian growth in chapter 6, Ehrman uses chapter 7 to explore the reasons why Christianity was so vigorously opposed by the Roman world. After all, wasn’t the ancient Roman world supposedly polytheistic and committed to diversity? Why then would they be bothered by yet another religious system? Why not just leave Christians alone?

Drawing on early sources, like the letter of Pliny the Younger to the emperor Trajan, Ehrman rightly argues that Christians were seen as a threat to the social and political stability of Rome precisely because they refused to pay homage to the Roman gods—which in turn put the nation of Rome in danger of their displeasure. In short, Christians were viewed as “atheists” and anti-religious.

In addition, Ehrman points out that Christians were also accused of moral licentiousness—eating the flesh of babies and engaging in sexual promiscuity. Of course, such charges are without foundation, but they’re examples of routine charges often made against “secret” groups considered superstitious and dangerous.

In the final chapters Ehrman sketches out how Christianity, starting with Constantine’s rule, prevailed and eventually took over the Roman world. In particular, he rightly laments how some later Christian emperors eventually proved to be as intolerant as the pagan emperors they had replaced. Indeed, some of these Christian emperors even advocated for tearing down pagan temples and forcing pagans to convert.

Based on such developments, Ehrman offers this general conclusion:

One of the greatest aspects of ancient paganism, taken as a whole, was the widespread willingness to accommodate and even revel in diversity. That was lost with the triumph of Christianity. (286)

That is partially true, but also partially false. Even Ehrman himself acknowledges that paganism exhibited its own version of intolerance. After all, for the prior three centuries, Christians endured serious persecution and sometimes even death at the hands of these “tolerant” pagans.

Moreover, Ehrman observes that Constantine didn’t advocate for this treatment of pagans, but was quite content to let them keep their own religious commitments. In other words, he advocated for something akin to religious freedom—a view most Christians today would share.

Ehrman has written an intriguing, helpful, and well-balanced volume exploring the development, and eventual dominance, of early Christianity.

Certainly there are areas were I, and others, would disagree—for example, on the treatment of miracles, analysis of martyrdom, and the role of tolerance and intolerance. But this volume is a refreshing shift away from the tone of some of Ehrman’s earlier volumes that seemed more polemical and critical in their assessment of early Christianity. Indeed, as a whole this is an enjoyable read that is clear, insightful, and well-written.

Thus, Ehrman’s volume will be an important addition to any reading list exploring the emergence of Christianity in the first four centuries.