Christians ought to be a little weird. That’s the message of a new book by Larry Hurtado, emeritus professor of New Testament at the University of Edinburgh. In Destroyer of the gods: Early Christian Distinctiveness in the Roman World, he describes how Christians in the first three centuries set themselves apart from the broader Greco-Roman society. Christianity, with its universal claims, must be accessible to all cultures, but it shouldn’t accommodate itself to that culture in a bid to be relevant. Being accessible and odd at the same time, Hurtado argues, helped Christianity grow.

Hurtado wants to address our “cultural amnesia” regarding the origins of Christianity. He wants us to see how Christianity was different from all the other religions of the Roman era, but he also wants us to understand that many of our modern presuppositions about religion have little to do with religion in general and everything to do with Christianity.

Way of the Weird

Some of the ways Christianity differed from Roman society will surprise because Christian influence eventually made these things commonplace in Western culture. For example, Christianity is a bookish religion, and its emphasis on texts caused the West to assume that religions need texts. Early Christians expended time, money, and effort creating, copying, and circulating texts. Writing and publishing had been a hobby of the elites in the Roman Empire, but Christians of relatively limited means and education embraced the process.

This focus on sacred texts was one difference that set Christianity apart from paganism. The Jews had their Scriptures, but for other religions of the ancient world sacred texts were of relatively little importance. In the Roman Empire, ritual—not a body of knowledge—defined religion. Christians adopted the Scriptures of the Jews and began adding the letters and other writings of Jesus’s disciples. (Hurtado believes many of the New Testament letters are pseudepigraphal, but his explanation of Christian emphasis on text is still helpful.) Living as a Christian was important, but just as important was access to God’s revelation. Today every religion must have some sacred text in order to be taken seriously. In this, Christianity has become the model for world religions.

Being accessible and odd at the same time helped Christianity grow.

Christianity also gave the West its conception of how religion relates to the individual. Christianity’s claims were univeral, which meant anyone could adopt it through faith. Again, what was once a Christian distinctive, Westerners now assume characteristic of all religions. We now think of religious belief as something essentially private adopted as a matter of conscience and requiring some level of heartfelt conviction. 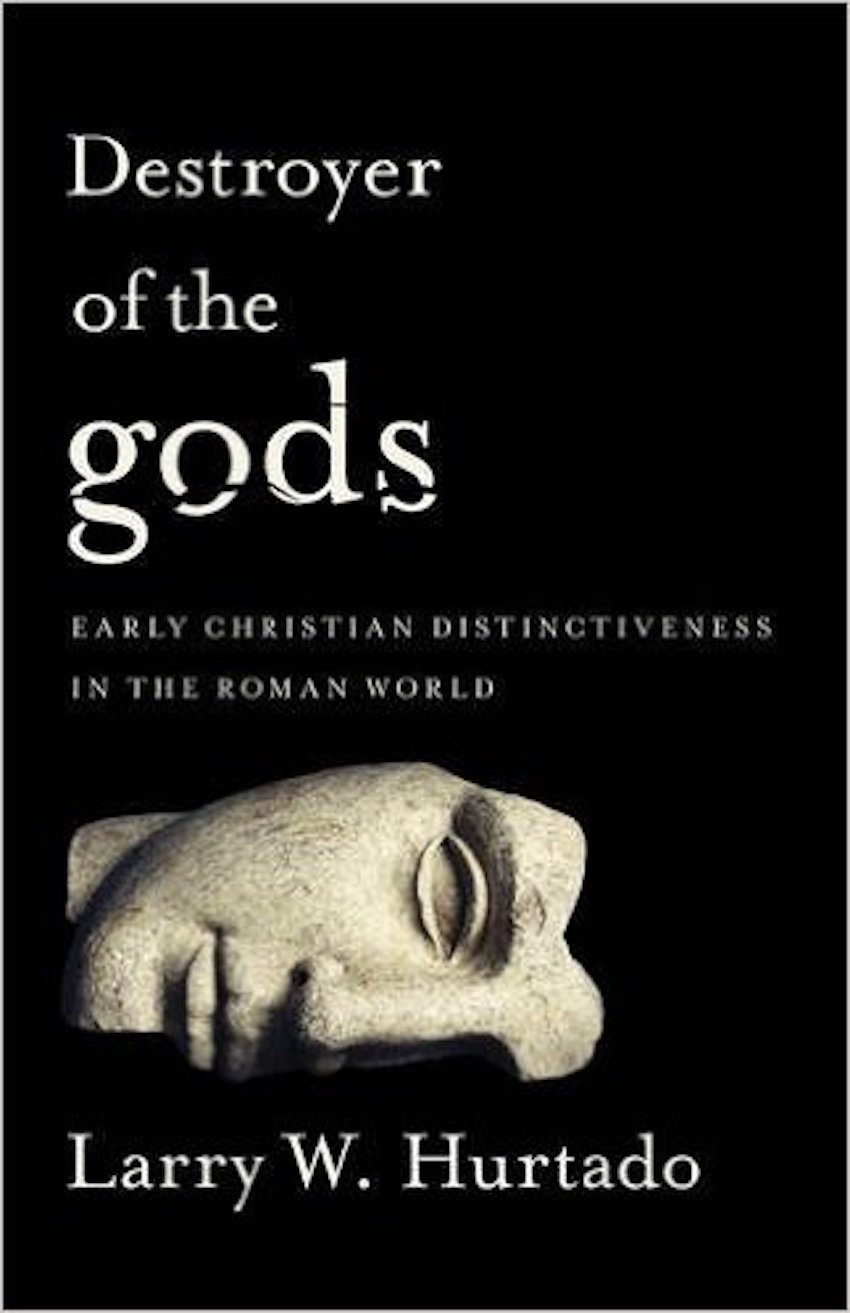 Destroyer of the gods: Early Christian Distinctiveness in the Roman World

Destroyer of the gods: Early Christian Distinctiveness in the Roman World

The Roman world had a radically different view of religious identity. One didn’t choose one’s religion in the Roman Empire, for religion was part of one’s ethnic identity. A Roman who renounced the polytheistic pantheon of gods became less than Roman. There was no need, then, to renounce since the Roman religious tradition was largely accommodating and tolerant. Just as the Roman state absorbed numerous other societies, so Roman polytheism could safely absorb other people’s gods. Personal trust in the gods wasn’t important; what mattered was public performance of ritual. Christianity, on the other hand, with its strict monotheism and ethical standards was much less accommodating. Romans viewed Christians who refused to participate in paganism with suspicion. Christianity’s intolerance couldn’t be tolerated.

Challengers of the Status Quo

Early Christianity gave the West many religious ideals we take for granted, but in other ways it challenged Roman society in a manner still relevant today. For example, Christianity differed from its Greco-Roman context since Christians believed in the value of children and the sanctity of human life. Romans often practiced contraception and abortion, but infant exposure was more practical. When newborns exhibited deformity or weakness, Roman families experienced no shame in discarding them. Exposing an infant girl because the family had hoped for a boy didn’t carry any social liability. Christians rejected this practice and, through the influence of the church, exposure eventually stopped. It seems, however, that Western society has come full circle in its disdain for the life of the youngest humans. With ultrasound technology we can now identify a deformity or an unwanted sex and have the baby disposed of before birth.

Another aspect of Greco-Roman culture Christianity was at odds with was sexual ethics. Romans didn’t expect men to be faithful to their wives. Women were expected to conduct themselves with purity, but for men the sexual taboos were few. A man shouldn’t sleep with another man’s wife, and he shouldn’t seduce freeborn virgins. Yet most other sexual behavior was accepted, and sex with slaves or prostitutes, who were often slaves, was common. Christianity challenged the sexual customs of the Romans in two ways. First, it did away with the double standard. Husbands and wives must live by the same sexual rules. Second, it widened the scope of immoral activity to encompass any sexual activity outside the husband-wife relationship.

The message of Destroyer of the gods is that the church grew because it was both universal and distinctive.

Secular society today has decided to maintain the egalitarian nature of Christianity’s sexual ethic, but it doesn’t hold us to the standard of purity. Instead, our society encourages both men and women to embrace the licentious behavior of Roman men. Here again we see a place in which Christians historically set themselves apart from the surrounding culture and must continue to do so.

The universal nature of Christianity made it a target for pagan ire. Christians didn’t honor the gods and exhibited strange convictions about the value of life and the purpose of sex. Jews had similar convictions, but Romans gave Jews a pass because of the tie between their ethnicity and their religious practices. It wasn’t their fault they were born Jews. Christians, on the other hand, chose their path. This Roman attitude for not tolerating Christian distinctiveness mirrors how secular America views conflicts over religious liberty. Religious conviction tied to ethnicity is much more likely to be seen as deserving a special dispensation when it runs afoul of governmental or societal expectations, but Christians often have trouble convincing people they deserve religious liberty when a matter of conscience has a public manifestation.

If Christianity wishes to grow in an increasingly pluralistic West, we can’t accommodate to secular social norms any more than early Christians could accommodate to Roman social norms. If we believe and act just like everyone else, what’s the point? Christians were different at the founding of the church, and many of the things that made them distinct are just as relevant today.