Christianity probably shouldn’t exist. Not only did the fledgling faith erect large obstacles to conversion, such as strict moral requirements and secretive, exclusive worship services. Roman society also despised Christians and sometimes put them to death. No modern church growth consultant would’ve predicted an exciting future for the ancient church.

Yet grow it did—a surprising turn of events that has captured the imagination of Alan Kreider in his new book, The Patient Ferment of the Early Church: The Improbable Rise of Christianity in the Roman Empire. Kreider—professor emeritus of church history and mission at Anabaptist Mennonite Biblical Seminary in Elkhart, Indiana—attributes the church’s success to four key factors.

Chief among them is the titular virtue of (1) patience, which Kreider takes to be the most essential aspect of early Christianity’s upward trajectory. This virtue was embodied in (2) communal actions (habits) and taught to newcomers in (3) catechesis and worship. Together these three factors created (4) a ferment, a kind of internal energy that couldn’t be contained.

Christianity wasn’t a bubbling stew heated from outside, but a living, breathing mash—a yeasty conglomerate leavened with the Holy Spirit and alive with possibilities. “Patient ferment” is therefore an appropriate metaphor. With the right ingredients and sufficient time, chemistry kicks in and makes good things happen.

As Kreider lays out his theory of Christian expansion, he’s up-front about his sympathies. He’s a lifelong Mennonite whose involvement in Anabaptist circles made him a leader in the peace movement. Perhaps it’s not surprising, then, that the theme of patience caught his attention. Kreider’s situated perspective is both a strength and weakness. His sensitivities allow him to notice a patristic emphasis on longsuffering that others might not have spotted. At the same time, no author can devote his life to a cause, then fail to see it show up in desirable locations.

Unfortunately, Kreider’s version of patristic patience often sounds more like Mennonite quietism than the praiseworthy Stoic heroism it so often was. The difficulty of interpreting “patience” in its proper historical context becomes especially acute when we consider the three main writers whose treatises Kreider examines. The first is Tertullian—a figure we could hardly accuse of being a peaceful proto-Mennonite walking the humble path of redemptive suffering. No one in the ancient church shook his fist under pagan noses more than Tertullian did. Perhaps this example may give us reason to interpret patience in a different way: as “greatness of spirit,” a virtue worthy of pagan admiration. Tertullian was, after all, a lot closer to Cicero and Seneca than to John Howard Yoder. 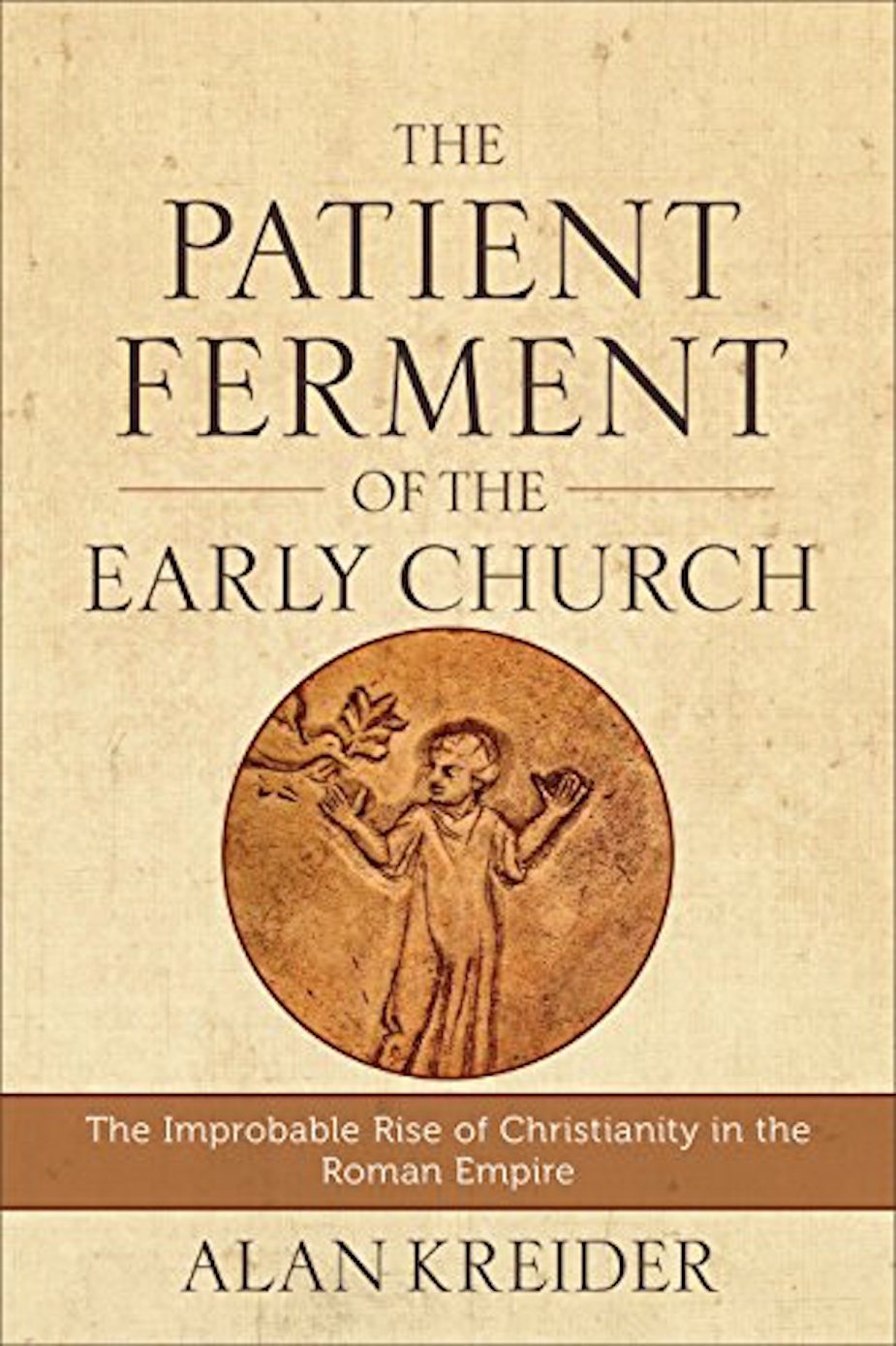 The Patient Ferment of the Early Church: The Improbable Rise of Christianity in the Roman Empire

The Patient Ferment of the Early Church: The Improbable Rise of Christianity in the Roman Empire

The same can be said for Cyprian, who ended up being (after some initial waffling) a stubborn African martyr with little stomach for compromise with pagans. As for the third figure, Lactantius, here’s a man who composed the most extraordinary exercise in schadenfreude the ancient world has ever produced. Lactantius’s On the Deaths of the Persecutors, in which he delights in the gory demise of numerous persecuting emperors, suggests we should interpret this anti-pagan apologist as a no-holds-barred brawler, not a pacifist saint shuffling his way to glory with chin upon his chest. In other words, I’m not convinced nonviolence was the precise meaning of “patience” in patristic usage.

Even so, the improbable rise of Christianity does demand a radical explanation. If the church fathers were saying nothing new, or had nothing different to offer the Roman world, the burgeoning faith wouldn’t have thrived. Kreider rightly highlights the countercultural (which would’ve meant counterimperial) thrust of Jesus’s saving message. There can be no question the early Christians embraced a communal model of love, mercy, peace, and humility that ran counter to Rome’s swaggering braggadocio and ruthless domination. Christianity offered a new way of living under a suffering Lord. The writings of the church fathers are suffused with this new paradigm—a grand moral vision waiting to be scrutinized by a discerning scholarly eye. Kreider is the perfect candidate. Herein lies the real genius of his book.

At its core, Patient Ferment investigates early Christian conversion in the tradition of Rodney Stark’s sociological study. Kreider asks the same basic question as Stark—What made this religion grow?—even if his explanation differs. Kreider uses the language of cultural conversion (“push and pull,” ch. 3) and investigates how Christians, especially women, served as effective change agents (ch. 4). Religious conversion, though ultimately a divine work, often has natural explanations as well, and Kreider lays out the various mechanisms with clarity and expertise.

Here again, the most important growth catalyst for the early Christians is said to be patience. In their business dealings, sexual morality, openness to women and children, manifestations of spiritual power, care for the poor, and ethics of nonviolence and tolerance, the first believers created a comprehensive “culture of patience.” This was more than an intellectual ideal. It was a real-world reality cultivated by habitus—the Christian way of life (ch. 5). Perhaps the most effective community-building strategy was the long process of catechesis and baptism, which inculcated a new moral vision in the convert (ch. 6). After being initiated into the community, the new Christian participated in the church’s worshiping life, which continued to foster an ethic of peace (ch. 7). This robust peacemaking instinct is seen especially in the ancient church manual called the Didascalia Apostolorum (ch. 8).

As one might expect in a book with Mennonite sensitivities, Patient Ferment concludes tragically with the Constantinian shift and the Augustinian compromise with imperial power (ch. 9–10). Under the first Christian emperor, religious coercion—initiated by the church yet aided by the state—became the norm. The courage to wait on God’s timing was transformed into the impatient taking of matters into one’s own hands. Augustine then institutionalized this trajectory when he rejected Cyprianic patience and ushered in “a gospel in which impatient, forceful actions—animated of course by loving intentions—replaced patient actions” (294). Crusades and conquests were sure to follow (296).

In this way, Kreider’s book ends like it began. The reader is led to discover the Christianity the author wanted to reveal. Is it pure fantasy? Of course not. Statements that embody the principle of turning the other cheek abound in patristic writings. Yet if we’re honest, we must conclude that Patient Ferment is an exercise in proving the point.

The evidence from counterbalancing statements, in which an aggressive or hostile tone can be found in the first three centuries, is downplayed in favor of the Anabaptist way of nonviolence. Ancient patience isn’t studied against its proper historical backdrop; for while the philosophers had much to say about it, this context goes ignored.

Kreider’s book is erudite and comprehensive in scope. But like the treatises of the church fathers themselves, the work is uniformly forceful in articulating its view against others that might have competed against it. Ironically, Patient Ferment is more zealous in its underlying spirit—though not in its tone—than it lets on.