Long before C. S. Lewis ever spoke about “mere Christianity,” the ancient church father Vincent of Lerins called us to hold “what has been believed everywhere, always, and by all.” Both of these great thinkers were saying that while Christianity has many forms and permutations that can vary over time and space, and many doctrinal configurations based on denomination or social location, even so, there is common core to the faith that all Christians embrace. This essential pith deserves our special attention, for it has come down to us through the centuries as a shared inheritance. 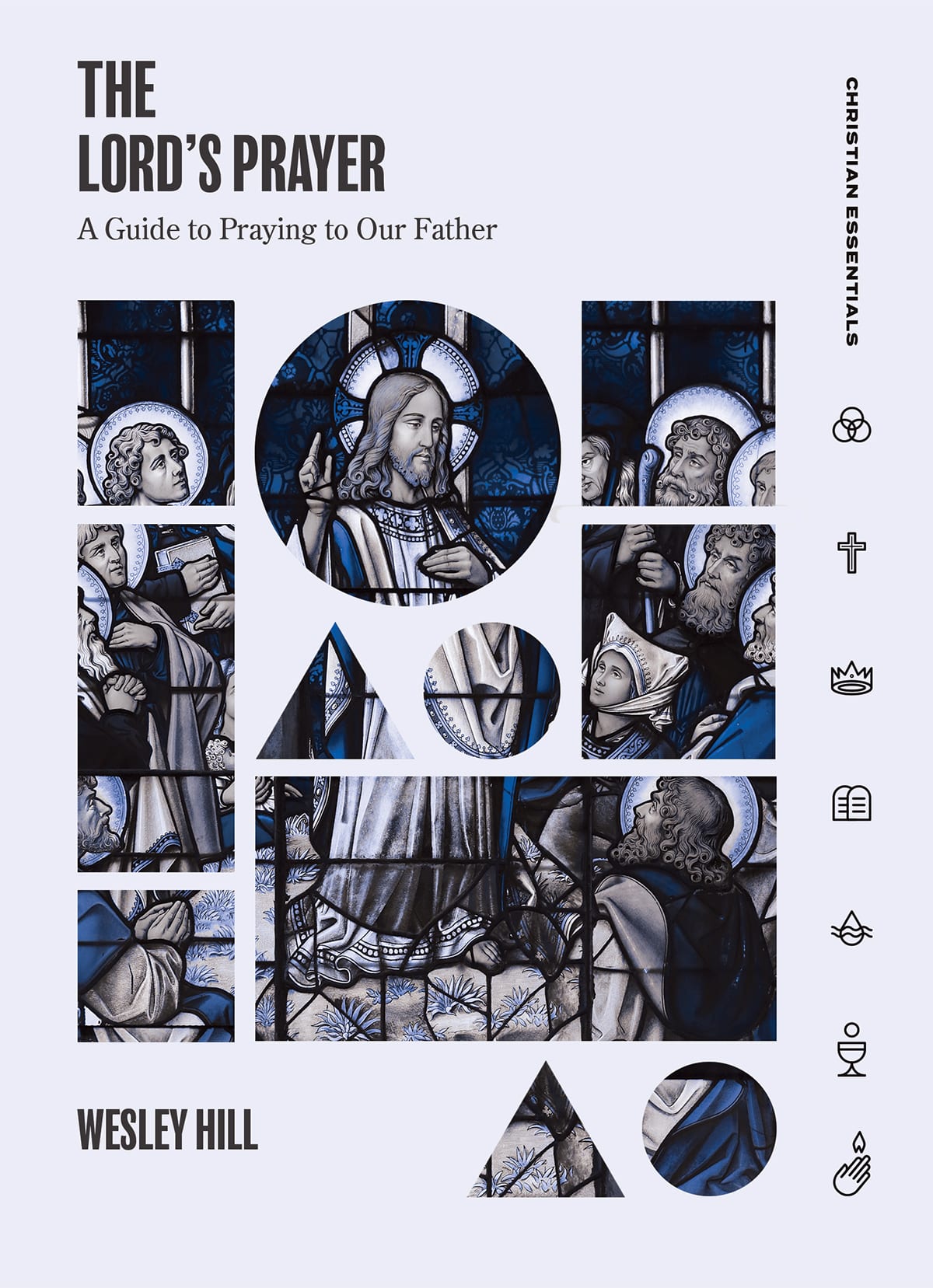 The Lord’s Prayer: A Guide to Praying to Our Father

The Lord’s Prayer: A Guide to Praying to Our Father

To help us explore this bequest of the ages, Lexham Press is to be commended for initiating its Christian Essentials series, whose goal is to “[pass] down tradition that matters” and “open up the meaning of the foundations of our faith.” Books in the series, released already or forthcoming, cover the Apostles’ Creed, the Ten Commandments, baptism, the Lord’s Supper, and corporate worship.

The latest volume in the series is The Lord’s Prayer: A Guide to Praying to Our Father by Anglican scholar Wesley Hill, associate professor of biblical studies at Trinity School for Ministry in Ambridge, Pennsylvania. This little book combines erudition and piety. At times it seems colored by Hill’s position as a conservative Anglican, such that his anticipated interlocutors or unspoken critics represent the concerns of mainline Episcopalians. Or as a seminary professor, Hill appears to be thinking about potential issues from the academy as often as from the pews. Even so, evangelicals of all stripes will find much common ground here around which to unite. A broad swath of Christians can celebrate Hill’s beautiful treatment of Jesus’s prayer.

Our Father in Secret

Hill wisely begins his meditation on the Lord’s Prayer by examining the context of Jesus’s instruction in Matthew 6:5–8. According to Hill, prayer isn’t about complex words that impress God, but is a simple, quiet, private, and relaxing time of meeting with a Father who loves us perfectly.

Prayer isn’t about complex words that impress God, but is a simple, quiet, private, and relaxing time of meeting with a Father who loves us perfectly.

“We can trade in that performative style of prayer for one that is more homely and familial,” Hill writes. “Unlike human fathers, who are often engrossed in their smartphones and have to have their attention captured in some creative way by their children, God is already and always attentive to his children” (3).

The ancient prayer known as the Pater Noster (Latin for “Our Father”) instructs us that Christian prayer must address the Trinitarian God who is eternally a communion of Father, Son, and Holy Spirit. Hill highlights the importance of confessing that the first person is always a Father, who eternally begets the Son within the loving delight of the Holy Spirit (12). Prayers addressed to God are made to a Father who knows how (and loves) to give good gifts to his children. And Christ our brother leads us to God our Father.

Although human fathers have often distorted this image, Hill doesn’t let the Christian off the hook when it comes to addressing God as Father (15–17). Fatherhood is an essential aspect of his Trinitarian being. By praying the Lord’s Prayer faithfully, Christians bear witness to our embrace of true Fatherhood, rejecting the lie that this designation of God is in any way “a charter for male domination” (17).

With this paternal background in place, Hill proceeds to the subsequent clauses. Using Hebrew and Greek exegesis of various biblical texts, along with extensive references to church historical figures and modern theologians, Hill wisely and devotionally explains the meaning of the prayer’s seven petitions and its final doxology.

Fatherhood is an essential aspect of God’s Trinitarian being. By praying the Lord’s Prayer faithfully, Christians bear witness to our acceptance of true Fatherhood.

The wording of most of the clauses will be familiar to Christians. Hill uses the ecumenical English Language Liturgical Consultation translation of 1988, whose phraseology is more or less the same as most modern Bible versions. Interestingly, Hill feels it necessary to defend his decision to “retain masculine pronouns for God,” adding the caveat that God certainly is not male “in a literal way” (5). In fact, he goes so far as to say—problematically, in my opinion—that “God’s employment of our language is [nothing] other than analogical” (5). Some readers might want to view the masculine pronouns of Scripture as more than mere accommodation, but as expressing something fundamental and intrinsic about God himself.

These issues aside, Hill handles each of the petitions in the Lord’s Prayer with a skillful combination of elegant prose, pious meditation, and scholarly exegetical adeptness. Literary, artistic, cinematic, and historical allusions, as well as contemporary stories and examples, pepper his remarks. Swiss theologian Karl Barth (1886–1968) has a prominent place among the theologians whom Hill cites.

Throughout The Lord’s Prayer, social justice issues also make a regular appearance. This might be surprising to readers not used to thinking of prayer as touching on earthly concerns. Yet as Hill points out, the prayer of Jesus in Matthew 6 centers on asking God to bring his kingdom into our midst. For the most part, the social issues—such as “cancer, AIDS, sex slavery, rapacious greed, and toxic waste” (42)—are woven into the book in a natural way. Though their presence is perhaps startling at first, Hill shows how they flow naturally from the concerns of Jesus himself. One possible exception is Hill’s example of the Marin Foundation (26–27), an organization in which Christians attend gay pride parades to convey the message, “I’m sorry.” Hill, who is well known through his previous publishing work as a celibate man with homosexual longings, uses this as an example of godly love; but not all evangelicals would agree with this approach.

Even so, this book is by no means a leftist diatribe or the ranting screed of a social justice warrior. Rather, it’s pious and holy in the best sense of these words. Many readers will find these meditations useful, and probably unobjectionable; except perhaps in one instance where Hill has re-translated the common wording of the Lord’s Prayer. This might surprise readers used to hearing the line in a different way.

‘Lead Us Not into Temptation’?

Pope Francis recently stirred international controversy when he criticized the way a phrase of the Lord’s Prayer is rendered in English. Matthew 6:13a reads “And lead us not into temptation” in both the English Standard Version and the New International Version—both widely used translations among evangelicals. This wording precisely follows the King James Version. However, Pope Francis remarked in 2017 that “[i]t is not a good translation because it speaks of a God who induces temptation. . . .  A father doesn’t do that; a father helps you to get up immediately. It’s Satan who leads us into temptation; that’s his department.” Therefore, in 2019 the Roman Catholic Church approved an official change to the English translation of the verse, so that it will read, “Do not let us fall into temptation.”

For those interested, the Greek phrase is καὶ μὴ εἰσενέγκῃς ἡμᾶς εἰς πειρασμόν. The debated words here are eisphero, to “lead” or “carry into”; and peirasmos, a “trial,” “temptation,” or “testing.” In what ways does God “lead” us into challenging or even negative experiences? And into what is he leading us—a “temptation” to sin, or a refining “trial”?

After citing the Vatican decision by Pope Francis (71), Hill debates the merits of the point. On the one hand, James 1:13–14 is clear that God doesn’t tempt us, but rather our own desires induce us toward sin. On the other hand, Scripture gives examples—such as when Abraham was asked to sacrifice Isaac—of God putting his people under intense pressure to see how they will respond (72).

After considering the meaning of peirasmos (73–75), Hill concludes that Matthew 6:13a (cf. Luke 11:4c) should be translated, “Save us from the time of trial.” In other words, God does not dangle temptations before us like the Devil would. He does, however, ordain times of testing for Christians, up to and including the test of martyrdom (though the test is usually accompanied by less dire consequences). How do we pray in such times?

Hill’s focus here is eschatological: “We will be saved from the time of ultimate trial, sheltered from it and spared from ever experiencing its true horrors, because there is One who has already experienced those horrors in our place. Because Jesus was not saved from temptation, we are” (75).

The Lord’s Prayer concludes by reflecting on the doxology included in many Bible footnotes for Matthew 6:13: “For the kingdom, the power, and the glory are yours, now and forever. Amen.” This expression is relegated to footnotes because it does not appear in the earliest Greek manuscripts, so it’s thought by some scholars to be a later scribal addition. Yet since it is part of the church’s received liturgical tradition, Hill accepts the phrase and meditates on it without any text-critical remarks.

Hill’s book, which is worshipful throughout, rightly concludes in a doxological fashion that points us to our glorious future with God. “[T]here is a coming time when we will have no more need to ask God for bread, for absolution, or for rescue,” he writes. “All of our tears will have been wiped away, death will have been finally defeated, and the earth and its people will be at peace and thriving” (94). Everyone will be utterly satisfied in God. As Hill points out, uttering a hearty “Amen”—let it be so!—is the best response to such a magnificent vision of eternity.