It is said that “history is written by the victors.” While we might not want to crown today’s cultural elite the “victors”—certainly not in an eschatological sense!—it remains the case that anti-Christian culture warriors permeate the secular publishing industry. Too often, the books they churn out, masquerading as scholarship, have a Christian scapegoat at their center.

Catherine Nixey’s The Darkening Age: The Christian Destruction of the Classical World is just such a book. It’s the latest among a slew of slanted historical studies that paint early Christianity in the worst possible light, a genre pioneered by Bart Ehrman and Candida Moss. The title makes the book’s premise clear: It will tell the hidden story of how boorish Christians snuffed out the light of ancient reason and ruined the world for the millennium to come. Gone are the days when historians strove to grapple objectively with complex issues. Instead, the construction of a specific narrative is now the goal. History is power. 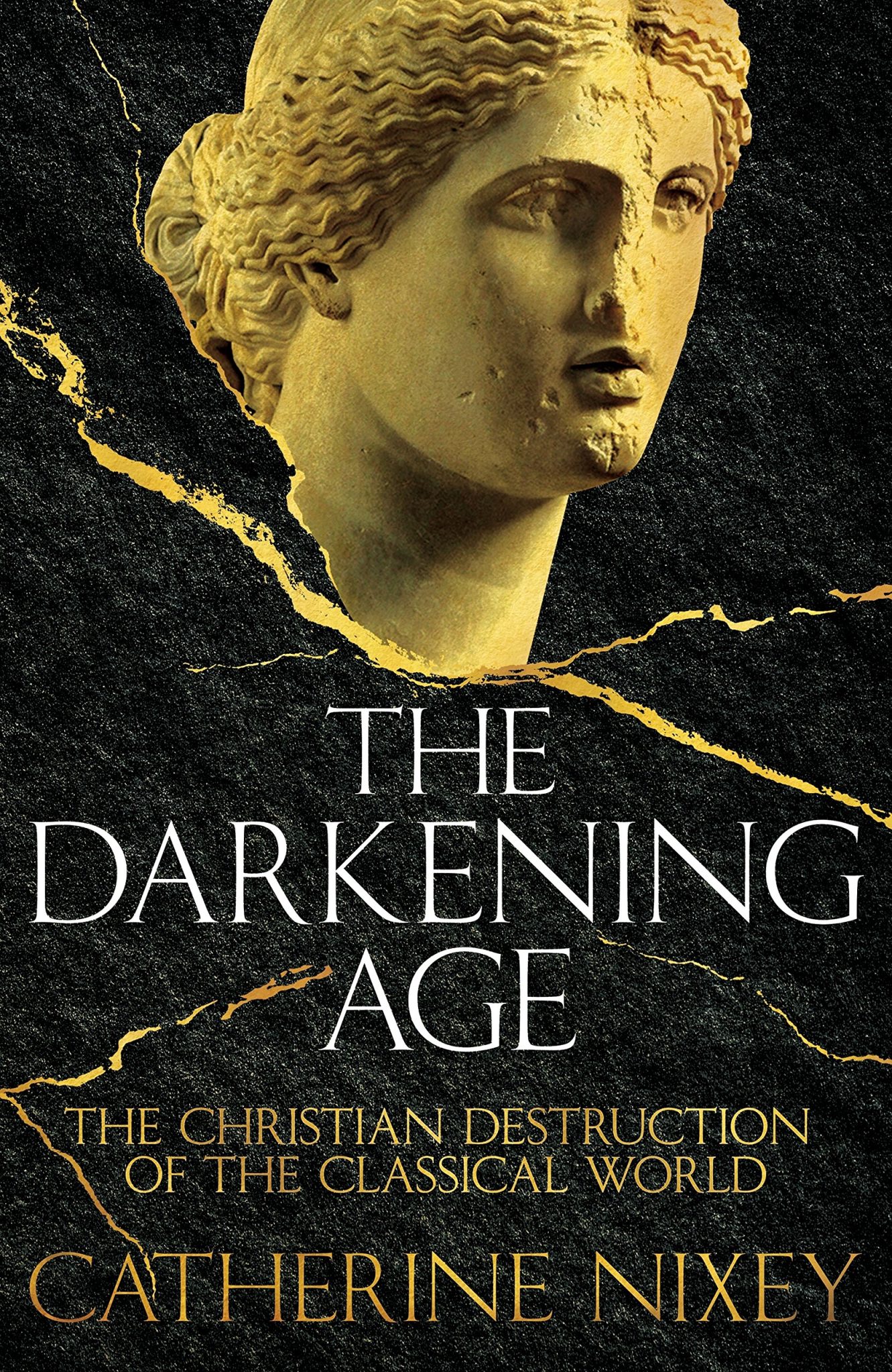 The Darkening Age: The Christian Destruction of the Classical World

The Darkening Age: The Christian Destruction of the Classical World

Catherine Nixey’s book addresses a cultural moment that is well worth the attention of scholars. Late Antiquity, from approximately the fourth to sixth centuries AD, was an age of immense societal change. Pagan Rome was giving way to the rise of Christendom. Tensions were running high. Tempers often flared. People found themselves newly at odds with long-held cultural assumptions. The lessons to be learned here are potentially instructive for our own turbulent times.

And Nixey has the credentials to tell the story well, if she had wanted to. She studied classics at Cambridge before entering the journalistic profession. In The Darkening Age, she combines skillful prose with obvious facility in the historical sources.

Unfortunately, objectivity and nuance aren’t part of the skillset that Nixey brings to the project. Her terminology instead constructs a binary opposition of good versus evil. The prologue sets the stage, characterizing the Christians as “destroyers,” “marauding bands of bearded, black-robed zealots” who were “terrorizing the east of the Roman Empire” (xvii). “Their attacks were primitive, thuggish, and very effective,” Nixey writes. “These men moved in packs—later in swarms of as many as five hundred—and when they descended utter destruction followed” (xvii). All this, in the book’s first 75 words! When an author starts by describing her subject in the terms of an animalistic horde, the reader can hardly expect a nuanced and balanced study to follow.

Pagan writers and leaders are valorized, while the church fathers are repeatedly skewered.

And indeed it doesn’t. The recurring topics, cycling over and over, are the destruction of pagan temples and idols, the eradication of Greco-Roman literature and learning, and the closed-minded foolishness of the ancient church’s leaders as they attempted to root out demonic religion. Pagan writers and leaders are valorized, while the church fathers are repeatedly skewered.

Of course, little is said about the pagan persecution of Christians immediately prior to this era. Standing in the tradition of Candida Moss (see The Myth of Persecution), Nixey can feel confident in dismissing the existence of any real Roman opposition to Christianity, because the percentage of martyrdoms was small (60–67). Her dismissive wave of the hand toward centuries of cultural hostility toward Christianity—a hostility that sometimes turned bloody—is the kind of one-sided storytelling that characterizes every page of her book. “Martyrs have always made good drama,” she writes. (60). Sure. It was just drama. Nothing to see here. Only the Christians can form a bloodthirsty mob.

Hypatia vs. the Horde

The trope of Hypatia the Noble Philosopher raises its head in The Darkening Age and serves as a good summary of the book’s premise (137–46). Anyone who saw the well-made yet equally biased film Agora (2009) starring Rachel Weisz will be familiar with Hypatia, though she has a long pre-Hollywood history as a symbol of enlightened, feminine, pagan reason in an age of vicious Christian patriarchy and censorship. Nixey doesn’t disappoint when she tells the story precisely this way.

Serene and intellectual Hypatia is juxtaposed with the Christian parabalani in Alexandria, led by their ringleader, Bishop Cyril. The parabalani were the stretcher-carriers who took sick outcasts to receive medical care in Christian hospitals when no one else would offer it, but Nixey blithely overlooks this point. Instead, her narrative proceeds as follows. One day in AD 415, as Hypatia “stepped out on her daily ride through Alexandria in her chariot” (141), she was set upon by a horde from the “eight hundred marauding, muscular parabalani” that were terrorizing the city and its governor (144). Aiding them were 500 monks who had “descended from their shacks and caves in the nearby hills . . . [u]nwashed, uneducated, unbending in their faith” (145).

The monks formed a “black crowd” that joined with the stretcher-carriers to attack Hypatia. “[B]estial men—truly abominable” was one ancient assessment that Nixey cites with approval (146). The mob murdered “Alexandria’s greatest living mathematician” in a church by scraping her with potsherds and gouging out her eyes (146). This moral travesty can’t be defended. Yet neither should it serve as the centerpiece of a simplistic narrative that pits animalistic Christians against the humane and tolerant pagans. Such an account is just as falsely hagiographical as the exaggerated martyr stories that Nixey elsewhere derides.

The reality is—if Nixey had cared to strive for a balanced approach—that both pagans and Christians could be capable of horrendous deeds. That being said, no bishop ever unleashed, or even advocated, the kind of cataclysmic and fiendishly cruel pogrom that Emperor Diocletian inflicted on the Christians in AD 303, the travesty that historians today call the “Great Persecution.” If we could measure cruelty in a balance, the pagan government of Rome would outweigh the ancient church by a long shot.

If we could measure cruelty in a balance, the pagan government of Rome would outweigh the ancient church by a long shot.

And Nixey also omits the valuable social benefits that Christianity offered the ancient world. Granted, that isn’t precisely her subject of investigation, yet any mitigating factors should certainly be relevant in a book with the subtitle “The Christian Destruction of the Classical World.” The parabalani are a great example. Yes, they could be thuggish. Historian G. W. Bowersock called them a “terrorist charity in Late Antiquity.” But it’s the “charity” part of that phrase that ought to be brought to the fore in any balanced historical treatment.

Early Christianity spawned the rise of a medical-care movement that the world had never before seen. The modern institution of charitable hospitals—facilities that actively seek out and care for the indigent and marginalized, not just those who can pay—owes its existence to Christian ideals of love and mercy, concepts that were foreign to the mindset of pagans, who viewed sick outcasts as deserving their fate from the gods.

All things considered, I wouldn’t recommend buying this book. It exists not to enlighten anyone about ancient times, but to stoke the fires of the already enraged. No attempt is made to understand two sides of a complex cultural shift at a pivotal moment in history. Nixey doesn’t even do the first job of the historian, much less of the enlightened humanist: to generously understand a point of view opposite of one’s own.

The Darkening Age wasn’t published to do history, but to reinforce existing anti-Christian prejudices. Ironically, by suppressing historical evidence and casting the early church in a uniformly negative light, the book actually darkens our understanding of ancient history—and in so doing, contributes to the rise of a new Dark Age.