Recently I finished reading my daughter The Lion, the Witch and the Wardrobe. It was her first time hearing the story; it was my first time reading it since I read Joseph Loconte’s delightful yet sobering A Hobbit, a Wardrobe, and a Great War: How J. R. R. Tolkien and C. S. Lewis Rediscovered Faith, Friendship, and Heroism in the Cataclysm of 1914–1918. The highest compliment I can think of to give this book is that Loconte, associate professor of history at The King’s College in New York City, has revealed to me new depths in Narnia, as well as in Middle-Earth and the Space Trilogy.

I’d been aware—who could miss it?—that all three were written in reaction against the de-Christianization of Western culture. The most delightful moment of Loconte’s book for me was this vignette: Lewis wrote the first book of the Space Trilogy in 1938 to confront readers with the biblical doctrine of the fall, and was dumbfounded when he discovered that no one who read the book saw the biblical connection. Rather than give up in despair, he concluded the public was now so theologically ignorant that, as he wrote to a friend, “Any amount of theology can now be smuggled into people’s minds under cover of romance.” The rest is history.

Thus, Loconte doesn’t begin with Tolkien and Lewis, but with the war. Perhaps his greatest service is to convey to new generations of readers the enormous cultural importance of World War I and its aftermath. You cannot understand the 20th century, or our current cultural predicament, without grasping this. But most middle-aged astronauts like myself, who are beginning to get too stout for our spacesuits, have inherited only a sketchy and fragmentary impression that WWI brought “disillusionment.” The young schoolboys and hobbits who are just getting old enough to lift a sword have heard even less, if anything.

So Loconte begins by reconstructing the great myth of progress that dominated the late 19th-century mind. All human history was viewed as a gradual but inevitable process of enlightenment and reform. Thus, we were much wiser than our ancestors and could safely lay aside inherited “mythologies,” codes of honor, and traditions in favor of rationalistic religion, refined cultural ethics, and (above all) the use of new technology to remake the world according to our own lights.

Then came the monstrosities of the war, absolutely unprecedented in human history. New technology was remaking the world all right—into a nightmare of anguish and death. We never had the power to kill people in such large numbers before, and we used it to its fullest extent. Tolkien wrote about feeling “the collapse of all my world” in the trenches; Lewis described the war as the combined experience of “every temporal evil” at once. 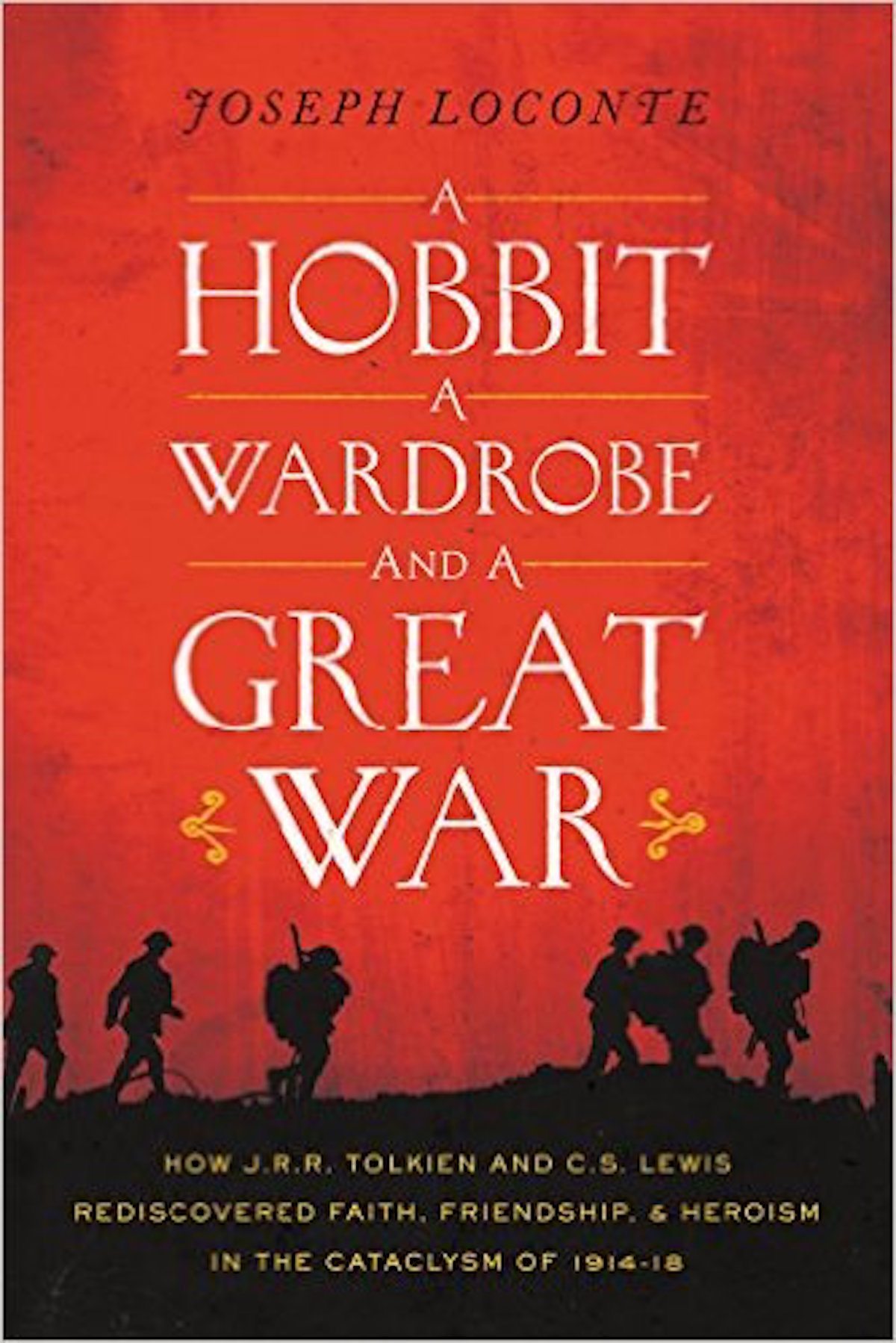 A Hobbit, a Wardrobe, and a Great War: How J.R.R. Tolkien and C.S. Lewis Rediscovered Faith, Friendship, and Heroism in the Cataclysm of 1914–1918

A Hobbit, a Wardrobe, and a Great War: How J.R.R. Tolkien and C.S. Lewis Rediscovered Faith, Friendship, and Heroism in the Cataclysm of 1914–1918

Loconte describes the Somme, which looms as a sort of great war within the Great War, like a gruesome mockery of one of Shakespeare’s “plays within the play”:

The British, in fact, had been pounding their targets for a week with heavy artillery. . . . “You will be able to get over the top with a walking stick,” one battalion was told. “You will not need rifles.” At 7:30 a.m., to the sound of whistles, drums, and bagpipes, nearly 100,000 British troops climbed out of their trenches and attacked along the entire 14-mile front. They were confident of victory, even exuberant.

What they did not know was that the bombardment had not penetrated most of the German dugouts, or destroyed the wire, or knocked out the German heavy artillery. . . . “When we started to fire we just had to load and reload,” said a German machine-gunner. “They went down in their hundreds. We didn’t have to aim, we just fired into them.” (61–62)

Hideously, the depth of the horror only reinforced the heights of progressive optimism. The true significance of the old Christian myth had been revealed at last: a great crucifixion would be necessary to destroy the enemies of progress and bring in the brave new world. Religious leaders, steeped in half a century of optimistic liberalism, were among the worst war propagandists. After the war, efforts to vindicate the promise of a new world led to disaster. Those who did not drop out in bitter cynicism followed their dreams into the arms of totalitarianism.

But during the war, the propaganda worked. When the conflict broke out, the British government put out a call for 100,000 volunteers; by spring 1915 it had enlisted 600,000. And their valor in the trenches was astonishing. The virtuous people of Western societies were willing to answer the call to self-sacrifice.

Here we come to Tolkien and Lewis, and Loconte shifts from historic to literary insight. One of the key themes of their fiction is that ordinary people are capable of enormous virtue—but only because theyre formed by the old “myths” and traditions their supposedly wise leaders have rejected. The hobbits of the Shire, the humble scientists who simply want knowledge, and the English children raised on old-fashioned codes of honor look hopelessly stupid and retrogressive to the heralds of enlightenment and “new powers rising”: Saruman and Denethor, the postwar British technocracy, and the snotty progressive schools that ruined Edmund and Eustace.

This is only one of many connections between the Great War and the fiction of Tolkien and Lewis that Loconte explores. There are far too many to give any full appreciation of them here. They include the abuse of technology; the need for an honorable chivalry that’s neither militaristic nor pacifist; and the central importance of deep friendship. I hadn’t noticed it, but friendship is more important than romance in all three fictional worlds. Loconte shows that this was intentional.

Reality of Evil and Providence of Unseen Powers

Where I appreciated Loconte’s insight the most was on the subject of evil. After the war, disillusioned people talked glibly about how the war was “hell” and “the work of the devil,” but these were almost empty categories for them. Even free will and moral responsibility were ultimately swallowed up in scientific explanations of human behavior.

By contrast, Tolkien and Lewis understood the metaphysical reality of evil. Far from “escapist,” their novels are almost too grimly “realistic” about dark powers and incurable corruption and hopeless last stands. None of the heroes actually wins: Frodo claims the ring, Calormen conquers Narnia, and Ransom proves powerless to save any of the three planets on which he fights. Victory, such as it is—always imperfect and bittersweet—comes from placing our hope in the seemingly impossible providence of unseen powers. Yet, paradoxically, this does not mean (as the secularists concluded after the Great War) that we are powerless and it doesn’t matter what we do. On the contrary, even the smallest moral choices are of unspeakable importance.

The theological underpinning of Tolkien’s and Lewis’s books were essential to their appeal—not because the public wanted Christianity as such, but because it was starved for transcendent things, for the good, the true and the beautiful. But the application of these transcendent things to politics was equally important to their success. In a century when the social order seemed to be constantly falling under the power of darkness, people who knew nothing of the Bible found something they recognized in Middle-Earth, Narnia, and the Space Trilogy. This, in turn, sustained a cultural environment within which a Christian worldview was able to maintain some level of plausibility.

That is a lesson for us. If you want to understand the historic origins of our present cultural crisis, and even more if you want to see how Christians can respond to it, read this wonderful book.