What do you get when you assemble an all-star cast of writers who have collectively experienced the many terrors and triumphs of fatherhood and have lived to write about it? You end up with The Dadly Virtues: Adventures From the Worst Job You’ll Ever Love.

As the subtitle suggests, this book is a tongue-in-cheek portrait of the gory glory of fatherhood, containing plenty of side-splitting anecdotes and cultural critique with a dash of philosophical profundity. The editor, Jonathan Last, likens the book to “something of a Swiss army knife: part instructional guide, part meditation, part war journal” (4).

The book is arranged chronologically to feature the natural progression of fatherhood, starting with childbirth and ending with reflections on being a grandfather. Along the way, the various contributors share their personal experiences with some essential phases of fatherhood: school, entertainment, pets, discipline, dating, college, and so on. The contributors include various writers, actors, and talk show personalities such as Christopher Caldwell, Tucker Carlson, Joseph Epstein, Stephen Hayes, and Larry Miller, and P. J. O’Rourke. With the exception of Rob Long, each belongs to the rugged fraternity of fatherhood. 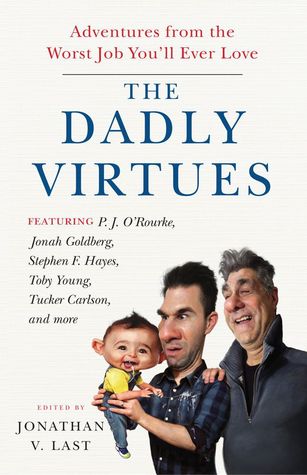 The Dadly Virtues: Adventures From the Worst Job You’ll Ever Love

The Dadly Virtues: Adventures From the Worst Job You’ll Ever Love

Last, a senior writer at The Weekly Standard, begins his introduction with these ominous words: “I was once reasonably dignified. . . . Then I became a father” (3). “The primary effect of children is that they take things from you,” he quips. “Children are like the aging process itself: an exercise in letting go of the ancillary parts of your existence until you are stripped bare, and what remains is your most elemental core” (4).

According to Last, at the elemental core of fatherhood lies a concept that has recently fallen on hard times in modern society: manliness. Not the brooding, chauvinistic, testosterone-filled caricature of manliness that we so often see in popular culture, but the sort of steadfast and sacrificial chivalry that one musters when “staring down the barrel of a baby” (11). He concludes:

So this, finally, is fatherhood: We destroy our lives so that life will continue anew, with part of our selves baked into it. In the ordinary way, of course, through our DNA. But also in the transcendent way, through the ideas and truths and loves that we teach our children. (8)

This statement can be taken as the driving thesis of The Dadly Virtues, with each writer vividly recounting his own destructive and transcendent experiences as a father. Below are some highlights:

As a recent inductee to the fraternity of fatherhood, I am personally weary of the many formulaic books I have seen that treat fatherhood as though it’s a science to be conquered. If you’re like me, you’ll agree that the unfiltered and personal nature of The Dadly Virtues is its greatest strength. Last and company portray fatherhood less like a science and more like an art form in which hapless amateurs creep toward mastery through a process of trial and error. With each chapter, you’ll be treated to a strikingly intimate and refreshingly witty take on the real-life rigors and joys of fatherhood.

Ironically, the unfiltered and personal nature of The Dadly Virtues is also its primary weakness since at times it’s a bit too unfiltered so as to be crass and a bit too personal so as to be inapplicable. Foul language appears in a couple of lines and the humor is occasionally taken too far. For instance, I’m left squirming in my seat as Labash (jokingly) explains that his “wanderin’” mind could have led him to search on the Internet for pictures of a girl in her panties (118). And Joe Queenan’s essay on the horrors of putting a child through school is so subjective that I’m left wondering what relevance it might have for my experience.

These few minor instances aside, The Dadly Virtues is a refreshing look at the time-worn institution of fatherhood. After reading it, those of you who aren’t dads will wonder if you should ever become one, while those of us who are will wonder why we didn’t start sooner. In the words of Last, “If you aren’t otherwise engaged in some duty that precludes it—say, the priesthood—and you have the opportunity, then you should be a father. There is nothing more vexing, exhausting, noble, or manly. It’s the worst job you’ll ever love” (15).

Often side-splitting, sometimes tear-jerking, and always riveting, The Dadly Virtues will resonate with any father or father-to-be.