In a dusty spot along the ancient King’s Highway in Jordan lies a cultural oasis: King’s Academy. Modeled after New England’s fabled Deerfield Academy, the academy was founded by King Abdullah II to train up a new generation of Arabs to lead the Middle East into a pluralistic future. The academy itself embodies the pluralism it envisions: actual princes and paupers from all religious and cultural backgrounds live, study, and play alongside one another.

Not long ago, I visited King’s Academy to participate in a roundtable discussion on the promises of pluralism in the Middle East. A philosophy teacher boasted of the academy’s own commitment to pluralism and told of Buddhist students observing Ramadan, Muslim students observing Easter, and Christian students practicing transcendental meditation—all in a show of solidarity with one another. I later asked the philosophy teacher how these syncretistic practices might disrupt a student’s commitment to his or her own faith. “That’s the price of pluralism,” he replied.

But is syncretism and assimilation really the only way to survive in a pluralistic context?

Not according to David Kinnaman and Gabe Lyons in their latest book, Good Faith: Being a Christian When Society Thinks You’re Irrelevant and Extreme. Kinnaman is the president of Barna Group, a leading research company, and Lyons is the founder of Q, a TED-style learning community that educates and mobilizes Christians for the good of society. Together they contend that “holding tight to biblical conviction is not only worthwhile and critical but also absolutely doable” for Christians in our pluralistic society (15).

Their conclusion is refreshingly optimistic considering the bleak portrait they initially paint. Based on thousands of interviews they conducted, Kinnaman and Lyons report a growing number of U.S. adults perceive Christianity to be irrelevant and extreme. Whereas most U.S. adults once shared a moral center with Christianity, the dominant culture now follows a new moral code of self-fulfillment. Now, any belief system (such as Christianity) that would constrain this pursuit of self-fulfillment must itself be constrained—at all costs.

Counterintuitively, the appropriate Christian response the authors present isn’t to take defensive measures, but to make ourselves vulnerable by practicing “good faith”—trusting God and living to bless others:

Living in good faith means helping the world and the people in it to be orderly and right, abundant and generous, beautiful and flourishing with life and relationships—just as God created them to be. (71) 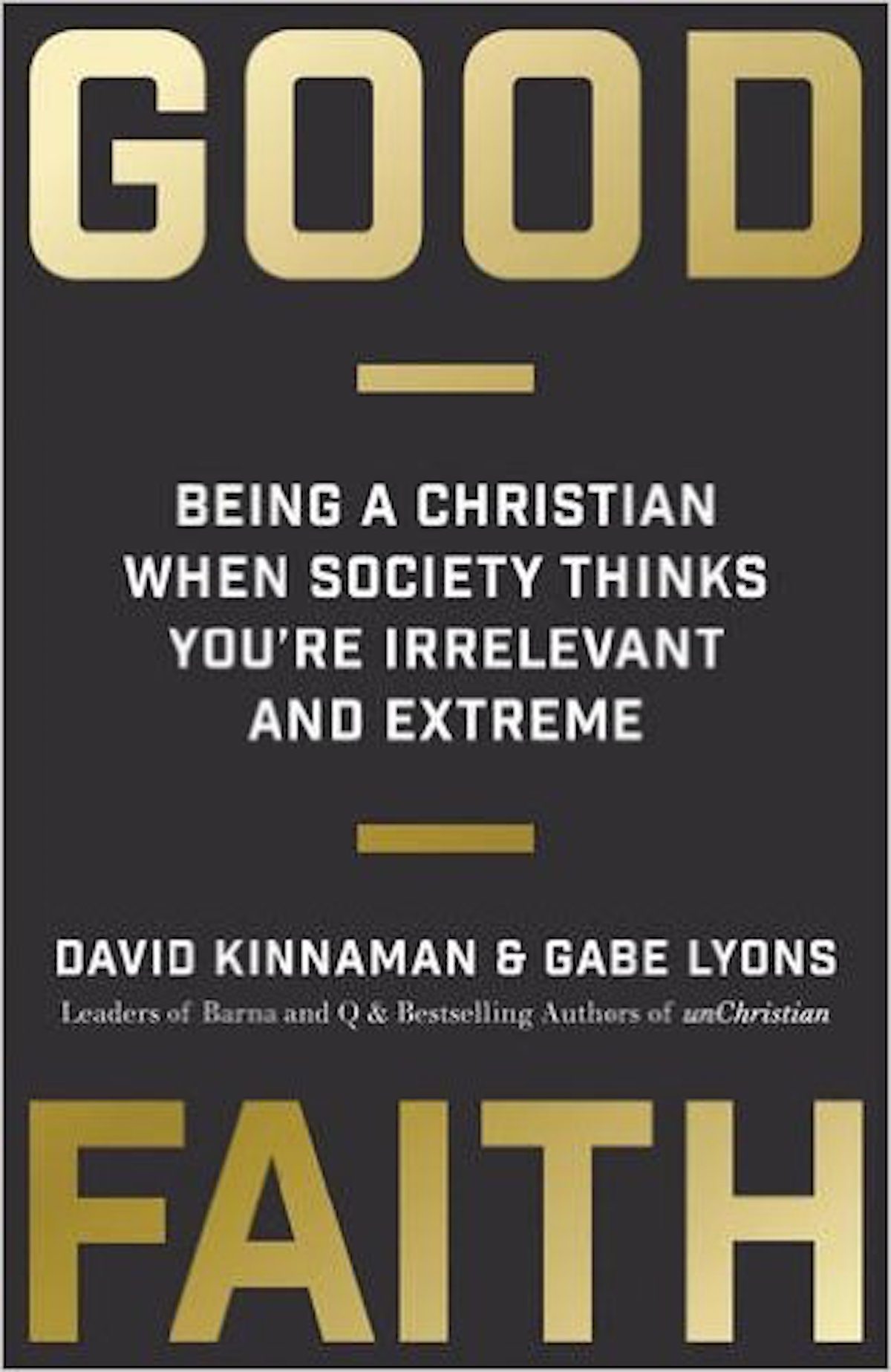 Good Faith: Being a Christian When Society Thinks You're Irrelevant and Extreme

Good Faith: Being a Christian When Society Thinks You're Irrelevant and Extreme

They continue, “The recipe for good faith boils down to this: how well you love, what you believe, and how you live. If you don’t have all three, your faith isn’t good—it’s half-baked” (72). Although all the three ingredients are co-dependent, there’s a logical order. First, Christians must love God and love others. Next, we must believe orthodox Christian teaching because without it we can’t really know how to love God and others. Third, love and belief must be tied together in a coherent pattern of living; otherwise, our faith will have no tangible effect on the world.

If Christians in America—not just individually, but in community—took this pattern seriously, the American church would become “a counterculture for the common good” (75). This isn’t your father’s moral-majority version of counterculture. The authors call for “confident pluralism” (others would call it “principled pluralism”). In other words, Christians don’t need to assimilate to the mainstream culture but should instead accommodate the culture by “support[ing] the right of every person to live by his or her conscience” (112).

Throughout the remainder of Good Faith, Kinnaman and Lyons put this principle into action by showing how the “love + believe + live” pattern might address some of the most pressing cultural needs of our day. In the final chapter, they summarize the ways the Christian community should be a counterculture, which include:

In the face of mounting cultural opposition, Christians can be tempted to place their hopes in political candidates, boycotts, programs, and other human solutions. While these solutions have value, placing our hope in anything but God betrays lack of trust in his providence. At such a time as this, the primary strength of Good Faith is its urgent reminder that “[Christians] are called not to determine the outcome but to be faithful” (262).

By answering the call to faithfulness with their “love + believe + live” formula, the authors have taken an ancient message about the integrated Christian life (e.g., Jas. 3:13; 1 Cor. 13:1) and repackaged it in a way that’s memorable and teachable. While thinking through the various cultural issues covered in Good Faith, I often asked the Lord to help me see which of the three components I might be missing.

Unfortunately, this book’s urgent message is weighed down by some serious ambiguities. For a book with “faith” at its theme, I was surprised to find no clear statement of the gospel. The authors come close at times by acknowledging that “we have no real ability to be or to generate good on our own” (71) and that “before we can run around doing good, we must acknowledge our need to be healed and restored” (78). But healed from what and restored to what? I understand this book isn’t meant to be a theological treatise, but by failing to clearly explain this fundamental prerequisite for good faith, their call to practice good faith suffers.

Also, the description of “confident pluralism” lacks nuance, which could prove disastrous in the hands of some readers. The authors argue that “people of good faith do not insist that those who don’t share our values be legally compelled to live by them” (105). Rather, “We must support the right of every person to live by his or her conscience” (112). But how far do we take this view? Do we support the legalization of abortion so that others won’t be compelled to live by our pro-life values? Do we support same-sex marriage or gender-neutral facilities on that same basis? In fact, don’t all laws compel some people to live by the values of others? If so, how practical is their version of “confident pluralism” after all?

Perhaps Kinnaman and Lyons were intentionally ambiguous so their writing could reach a more ecumenical audience. After all, they’re conservative evangelicals, but they speak in general terms to describe Catholics as our “brothers and sisters” (203). This bent toward ecumenism paired with a host of ambiguities will make it a little harder for some conservative evangelicals to heartily embrace this book. This is unfortunate since Good Faith contains a timely message that demands careful consideration from evangelicals everywhere.