Like many, I first encountered Jonathan Edwards (1703–1758) in my high-school English class. We read “Sinners in the Hands of an Angry God” as a quintessential example of how dismal life was back when the Puritans ran things. I re-encountered Edwards a year later when I became a Christian. A pastor gave me a pamphlet with Edwards’s Resolutions and Advice to Young Converts. It changed not only my picture of the man but also the Christian life.

I discovered a depth of faith and sincere earnestness for holiness that was worlds apart from what I experienced in both my childhood mainline Lutheran church and also evangelical youth groups. I re-read “Sinners in the Hands of an Angry God” with new eyes and saw not just a righteous God of wrath, but one of glorious and immeasurable grace: “Christ has flung the door of mercy wide open, and stands in the door calling and crying with a loud voice to poor sinners!”

Zoom forward. Now in Germany writing a dissertation on Edwards (the earliest known doctoral thesis on Edwards was written by an American in Germany, so it’s not too weird), I’ve discovered a lively world of scholarship on the man. The immense amount of secondary literature on his life and thought (not to mention his massive corpus itself) can be intimidating, but don’t let it deter you from a worthwhile challenge.

These four recent works not only offer important contributions to the field, they’ll also challenge you mentally and spiritually.

1. A Reader’s Guide to the Major Writings of Jonathan Edwards (Crossway, 2017) 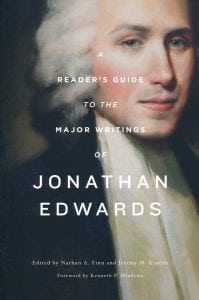 Co-editors Nathan Finn and Jeremy Kimble organized a first-rate team to introduce readers to Edwards’s main works. Every author is “a convictional evangelical who resonates personally with Edwards’s spiritual vision and wants to commend his writings to others.” Hence, each chapter provides not only the historical context and summary of a major writing by Edwards, but also theological analysis and applicable reflection. The book promises readers an “appetizer,” whetting their appetites for the “main course”—Edwards’s writings themselves.

The first chapter by Dane Ortlund, “How to Read Jonathan Edwards,” and the appendix by John Piper, “A Personal Encounter with Jonathan Edwards,” are alone worth the price of the book. They express so well what many have experienced when reading Edwards. “To read Jonathan Edwards is to see God,” Ortlund writes, “Not because Jonathan Edwards looked like God but because he looked at God. . . . And then he wrote down what he saw.” Ortlund also offers useful tips on how to read and understand Edwards for those who may not be accustomed to challenging theology or texts older than 20 years. Piper’s chapter is largely autobiographical; it vibrantly exhibits how a lifelong devotion to learning from a thinker like Edwards, a “mind in love with God,” can yield rich spiritual fruit in one’s life and ministry.

The other chapters navigate readers through his major works—like Religious Affections, The Life of David Brainerd, Freedom of the Will, Original Sin. If you’re an evangelical looking for a spiritual and intellectual challenge, you must read Edwards, and you should read these chapters to help you read Edwards.

The concept behind the collection is brilliant. While the critical Yale edition of Edwards’s works (26 volumes, accessible free online) already offers comprehensive introductions to each one, this book is the first attempt to introduce his major writings in one place. The fact that it’s explicitly written for evangelicals may preclude it from being the standard scholarly reference, but maybe it could inspire a similar book to this end.

Last, a significant limitation is that all the authors are white males (though quite diverse internationally, from the United States, Australia, Ireland, and England). I don’t make this point for political correctness but practicality. The goal to expand the evangelical readership of Edwards can only go so far without engaging the perspectives of women, people of color, and the majority world.

2. Jonathan Edwards: An Introduction to His Thought (Eerdmans, 2018) 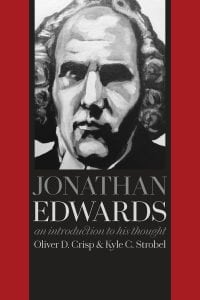 This book is a welcome resource for the study of Edwards’s thought—particularly his philosophical theology. Coauthors Oliver Crisp and Kyle Strobel are seasoned Edwards scholars who stand at the forefront of major discussions in the field. They’re evangelicals who admire Edwards as an exemplary thinker, but unlike A Reader’s Guide, this book not only commends but also critically engages Edwards’s thought.

As Crisp has forcefully argued elsewhere, if evangelicals wish to retrieve Edwards to bolster and deepen their movement, they also have to repair some of the problematic aspects of his thinking: in particular, the way his philosophical idealism commits him to a form of panentheism (not a charge Edwards would own), and his overly deterministic views of continuous creation, original sin, and human freedom.

Chapter 1 surveys Edwards’s intellectual context. Many have praised him as the greatest American theologian. The authors rightly correct this view—Edwards was British—and then make a much bolder claim that he was one of the greatest British theologians. The next three chapters treat Edwards’s thinking on the nature and acts of God in light of his Trinitarianism, philosophical idealism, and occasionalism. Chapters 5 through 7 examine Edwards’s views on soteriology and sanctification, focusing on his understanding of the atonement, theosis, justification, anthropology, religious affections, and ethics. The final chapter, “Becoming Edwardsean,” casts a vision for how the church can best retrieve Edwards by using good impulses in his own thinking to repair some troublesome ones, especially his views on the God-world relation.

The book reads more like an account of Edwards’s thought than an introduction to it. This isn’t a criticism (though the title misleads a tad) but an attempt to identify what the book distinctly contributes. The chapters engage his theology rather than present it. The authors promote certain interpretations of Edwards’s thought they’ve developed and debated in earlier scholarly writings (like here, here, here, and here), and they bring them together in a more accessible and coherent account.

They’re forthright about this approach in the Introduction, where they identify themselves with the “British school” in contradistinction to the “American school” of Edwards studies. The latter has taken Edwards’s dispositional ontology as a central “interpretive key” to unlock the various innovative and thoroughly modern aspects of Edwards’s thought. In contrast, the British school (named because most proponents either lived or studied in Britain, like Paul Helm, Stephen Holmes, and Crisp and Strobel) see Edwards as ultimately a traditionalist wishing to both defend and also reconceive classical theology in the context of the early Enlightenment. Edwards’s adaptations produced riveting perspectives and ideas—but they weren’t without problems, and Crisp and Strobel occupy themselves with these issues throughout the book.

If you want a simpler introduction to Edwards’s thought, maybe start elsewhere (like here). But if you’re ready to engage with Edwards, you’d do well to buy a copy and a few pens. 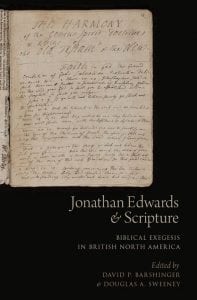 The co-editors, Douglas Sweeney and his former doctoral student David Barshinger, have largely pioneered the recent trend in Edwards studies to restore the centrality of biblical exegesis in all areas of his life and thought (see especially their books here, here, and here). Ever since Perry Miller revived academic interest in Edwards in the early-mid-20th century, much of the scholarship has painted a lopsided portrait of a man engrossed in philosophy and religious psychology, with only a peripheral interest in biblical interpretation out of ministerial necessity. Even those interested in Edwards the theologian and revivalist have taken his biblicism for granted rather than carefully examined it.

In this collection of essays, Sweeney and Barshinger clean the brushes, hand them out to their friends, and repaint Edwards’s portrait—one that accurately portrays the pervasive impact of his biblical studies. By the end of the book, one sees a truer reflection of the man.

The authors (disclaimer: including me) explore Edwards’s engagement with Scripture and its intersection with key areas of his theology and ministry. Some identify as evangelical, but the main goal isn’t to celebrate and commend Edwards’s exegesis but critically analyze it. The essays appeal to students and scholars of various academic disciplines and interests: Puritanism and early transatlantic evangelicalism, history of biblical interpretation, early modern history and literature, theology, and more.

Nonetheless, lay believers and ministers wishing to grow their knowledge and love of Scripture will also learn valuable lessons from reading this book. For instance, Ken Minkema’s chapter on “Edwards’s Scriptural Practices” displays the impact of the minister’s scriptural study habits and techniques on his writing and preaching ministry. Charles Hambrick-Stowe’s chapter, “Language of the Heart: The Bible in Jonathan Edwards’ Personal Life and Spiritual Practice,” exhibits how Edwards’s passion for God’s Word permeated and enlivened his devotional life (which largely inspired John Piper’s recent book, Reading the Bible Supernaturally: Seeing and Savoring the Glory of God in Scripture). In his chapter, “Edwards, War, and the Bible,” James Byrd details how Edwards interpreted and preached Scripture to support England’s war efforts during his life as part of God’s righteous providence, reminding us that our own use of Scripture may be shaped by our times more than we realize. 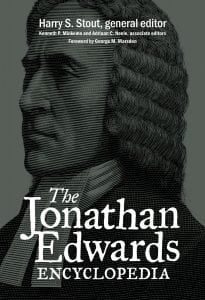 Last but not least, the Edwards Encyclopedia is a gem. Few persons have an encyclopedia all about them—a testament to Edwards’s stature and legacy. It’s also a testament to the complexity and breadth of his thought—we need a resource like this because it’s all simply too much to hold together in one head. I regularly consult entries like “Idealism,” “Occasionalism,” “Justification,” or “Aesthetics” to refresh my memory as I read Edwards and scholarly discussions in the field. The approximately 400 entries cover (among other things) his writings and sermons, key theological and philosophical concepts, his religious tradition, historical context, ministerial output, revivalism, missionary work, personal spirituality, and numerous biographies of his family, friends, disciples, intellectual sources and opponents, foreign correspondents and admirers, and theological heirs.

The editorial team doesn’t get better than this. Harry Stout, Kenneth Minkema, and Adriaan Neele are seasoned Edwards scholars and serve as the current editors of The Works of Jonathan Edwards. They invited experts and non-experts alike to contribute, so some entries are inevitably more specialized and informed than others. But the editors carefully proofed every entry for correctness, and the overall result is first-rate. The volume is a must for students and scholars of Edwards, and will prove resourceful to anyone interested in church history, theology, colonial American history, and more.

For his fifth Resolution, Edwards wrote: “Resolved: Never to lose one moment of time, but to improve it in the most profitable way I possibly can.”

Take his advice, and get reading!