The standard saga of modern American evangelicalism has been told time and again. It goes something like this: mid-20th-century American evangelicals broke away from fundamentalists, re-engaged society, created the Religious Right in the late 1970s, launched divisive culture wars, and radically transformed politics.

The sketch isn’t entirely wrong—but it’s not the whole story. Viewed mostly through a domestic lens, the mainstream perspective of American evangelicalism has been nearsighted. To see the bigger picture, we need a global lens.

This is exactly what Melani McAlister—professor of American studies, international affairs, and media and public affairs at The George Washington University—provides in her recent book, The Kingdom of God Has No Borders: A Global History of American Evangelicals. Her global lens complicates the picture quite a bit. She brings out tensions, intricacies, and contradictions within American evangelicalism that few have had the charity and patience—not to mention extensive grasp of foreign affairs and global history—to see. And yet this complex, global story will resonate among evangelical readers far more than will accounts that reduce them to a wing of the Republican Party.

While evangelical readers will discover a wealth of new material about their tradition in these pages, they’ll find much that intimately connects to their experiences. Many will identify with the college students who had their minds opened to the global diversity of Christianity through groups like InterVarsity and Cru. Some will recall bands like Audio Adrenaline and DC Talk encouraging the faithful to serve those in need overseas. They’ll remember the missionaries their church sent to the 10/40 window, their own short-term trips, and the calendars, magazines, maps, missions pastors, and guest speakers from organizations like Voice of the Martyrs that drew their attention to the persecution of their spiritual family abroad and how to pray for them.

McAlister threads such pieces together within a broader historical framework of “evangelical internationalism.” From the neo-evangelicals of the 1940s and 1950s to the 2016 presidential election, American evangelicals’ perception of themselves as a global people has greatly influenced their actions at home and abroad. In these formative decades, they devoted tremendous resources to foreign missions, global humanitarian aid, and foreign political activism on issues like international religious freedom, the spread of communism, wars, human rights, refugee crises, impoverishment, and more.

Her transnational framework makes a significant contribution to discussions concerning American evangelical identity (a hotly debated issue at the moment). She begins with the “theological definition,” noting evangelicals’ commitment to orthodox trinitarianism, biblicism, crucicentrism, and conversionism (based largely on David Bebbington’s famous quadrilateral). But no religious identity rests solely on a set of beliefs, she argues, and thus evangelicalism must also be seen “as a way of operating in the world.” Just as central to American evangelical identity is the zeal with which they live out their beliefs on a global stage, manifested in a proclivity for revivalism, entrepreneurialism, populism, individualism, and religious experientialism. 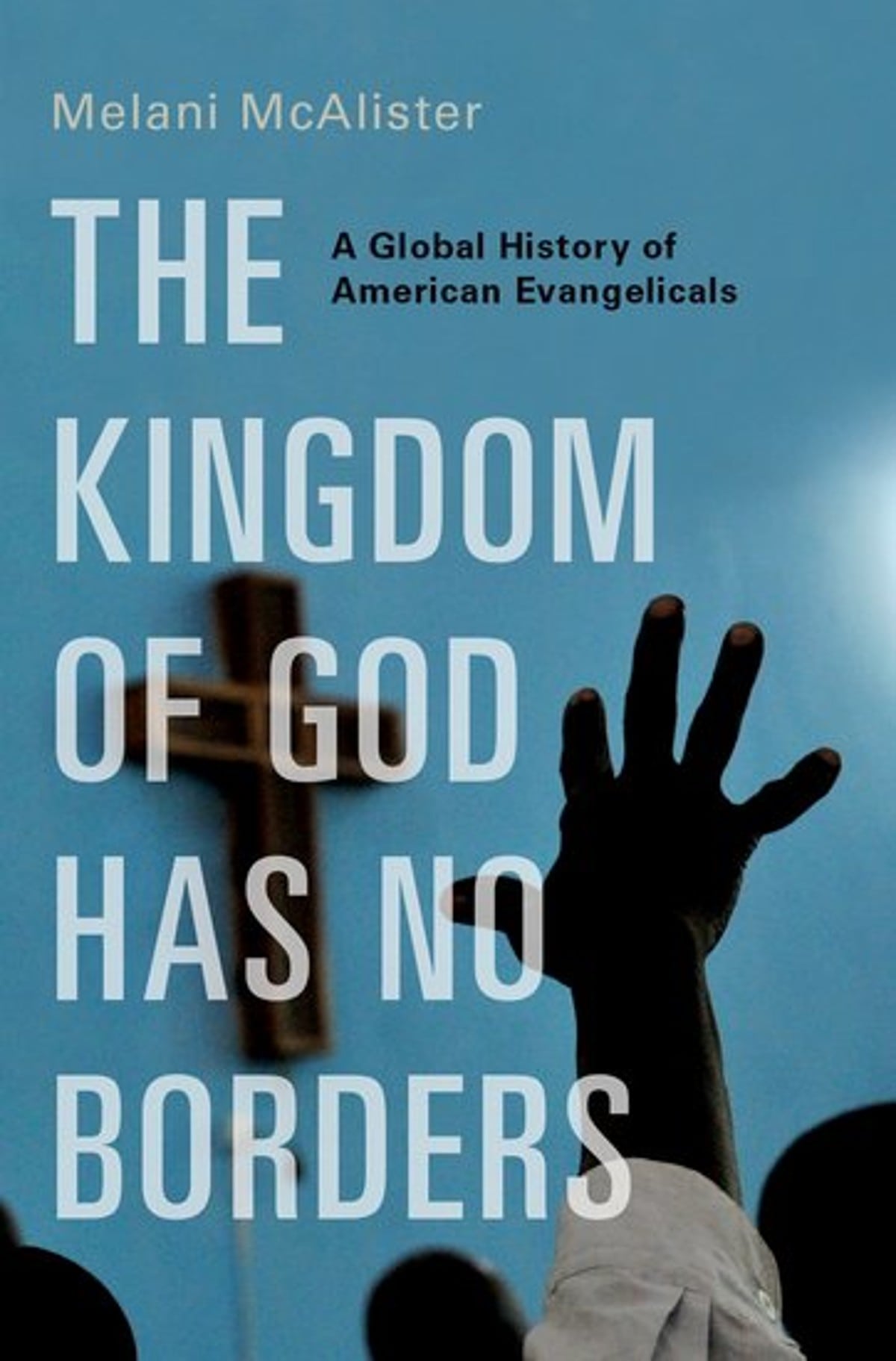 The Kingdom of God Has No Borders: A Global History of American Evangelicals

The Kingdom of God Has No Borders: A Global History of American Evangelicals

The Kingdom of God Has No Borders offers a daring new perspective on conservative Christianity by shifting the lens to focus on the world outside U.S. borders. Melani McAlister offers a sweeping narrative of the last 50 years of evangelical history, weaving a fascinating tale that upends much of what we know—or think we know—about American evangelicals.

She focuses on the many ways in which looking at evangelicals abroad complicates conventional ideas about evangelicalism. We can’t truly understand how conservative Christians see themselves and their place in the world unless we look beyond our shores.

Two postures in particular have defined how American evangelicals operate in the world. First, dissatisfied with consumerist religious life in the secular West, they’ve embraced a deep sense of “enchanted internationalism”—an orientation that idealizes Christianity in the global South as more authentic, passionate, exotic, and richly supernatural. This construction reaffirms and renews their faith and offers them hope for similar spiritual revitalization in the increasingly desacralized West.

The second posture is one of “victim identification.” Using a biblical analogy of the church as a body, American evangelicals have intimately identified with the suffering and persecution inflicted on the members of the body abroad. This self-identification as a persecuted global body has shaped how American evangelicals view themselves as victims too, mobilizing them to vigorously protect and advocate religious freedom for themselves and Christians around the globe.

The book foregrounds global networks like the Lausanne Movement and organizations like World Vision, Compassion International, Cru, and Samaritan’s Purse (all four made Forbes‘s list of the 25 largest U.S. charities in 2015) that have received too little attention in most accounts of American evangelicalism. It also focuses on influential actors who evade simplistic stereotypes. Wishing to treat the racial diversity of evangelicalism (while recognizing that many non-whites don’t self-identify as evangelical), she highlights the mixed experiences of black and white students serving Sudanese refugees in Egypt, African Americans promoting greater awareness of Afro-identity and neocolonialism at the Urbana conference in the late 1960s and 1970s, and a team of black Methodist (AME) and Southern Baptist pastors traveling to Sudan to redeem slaves. Also compared to most accounts, she devotes more balanced attention to women and to the liberal-conservative ideological spectrum of evangelicalism.

Continually reminding readers that causality goes both directions, she also spotlights the influence of global affairs and foreigners on American religious life. She examines key voices from Latin America and Africa at the 1974 Lausanne Congress urging Western evangelicals toward greater concern for social justice, and how divisions over apartheid among Christians in South Africa shaped and split American evangelical opinions on race and colonialism.

Noting that “the biblical interpretations of global South Christians were not under U.S. control,” she tells how American evangelicals felt bolstered when Ugandan ministers took a firm stance against the ordination of gay bishops, but then at odds with their radical advocacy of severe legal punishment against homosexual acts (in some instances even the death penalty). She also offers an insightful and fresh interpretation of the rise of the Religious Right in America by tracing its ideological and rhetorical pillars to evangelical engagement with global affairs and social issues in the late 1960s and 1970s.

The book builds on a growing body of literature that attempts to view American religion in the context of world Christianity (I especially recommend reading it alongside David Hollinger’s Protestants Abroad [read TGC’s review]). Her approach follows the transnational and cultural turns in historical studies and builds on recent scholarly trends in emotion studies and body politics to capture the fuller picture. But her prose is smooth and accessible to non-academics. While she’s no sympathetic insider, she clearly did her homework to understand “evangelical internationalism,” even traveling with evangelical groups to Israel, Egypt, Uganda, and Sudan, and attending conferences at places like Wheaton College.