In Christian Slavery: Conversion and Race in the Protestant Atlantic World, Katherine Gerbner, assistant professor of history at the University of Minnesota, debunks a common myth: that early 18th-century Protestant missionaries to the New World laid the foundations for later abolitionism.

The dark reality is that many of them helped form a pro-slavery ideology that for decades would be used to defend the compatibility of Christianity and slaveholding.

From ‘Protestant Supremacy’ to ‘Christian Slavery’

Gerbner’s argument traces three historical steps in the transition from the belief in “Protestant supremacy” to a full-fledged defense of “Christian slavery.” Along the way, she shows how the formation of racialized slavery in the Atlantic world was closely tied with shifting definitions of what it meant to be a Christian. Though she focuses on Anglican, Quaker, and Moravian missionaries, she demonstrates how their formulation of Christian slavery shaped and anticipated the thinking of key Great Awakening leaders like George Whitefield.

In the first step, many settlers and planters in the New World created an identity around the idea of “Protestant supremacy.” They tied their belief in the superiority of Protestantism to their belief in the superiority of white ethnicity and culture. They exploited this connection to assert their superiority not only against other religions like Roman Catholicism and Judaism but also against other ethnicities like the Native Americans and black Africans (they typically associated “inferior” race with “inferior” pagan religion, deeming them “hereditary heathens”).

This move had troubling consequences that anticipated later forms of white supremacy. For example, Gerbner identifies a change in the laws of 17th-century Barbados that moved from defining Christianity doctrinally to making it an indicator of ethnicity and class. The later laws juxtaposed “Christian” with the word “negro,” indicating that Christians were free whites and that blacks were non-Christian.

This shift was in response to a growing tension that questioned the legitimacy of Christians enslaving other Christians. So by contrasting “Christian” with “negro,” these laws “invoked Christianity as an indicator of ethnic identity” rather than doctrine in order to justify the enslavement of (non-Christian) blacks (45). The early planter classes also tied Christian identity with freedom, and this made many resistant to evangelizing their slaves, because they feared conversion would give them grounds to demand emancipation. 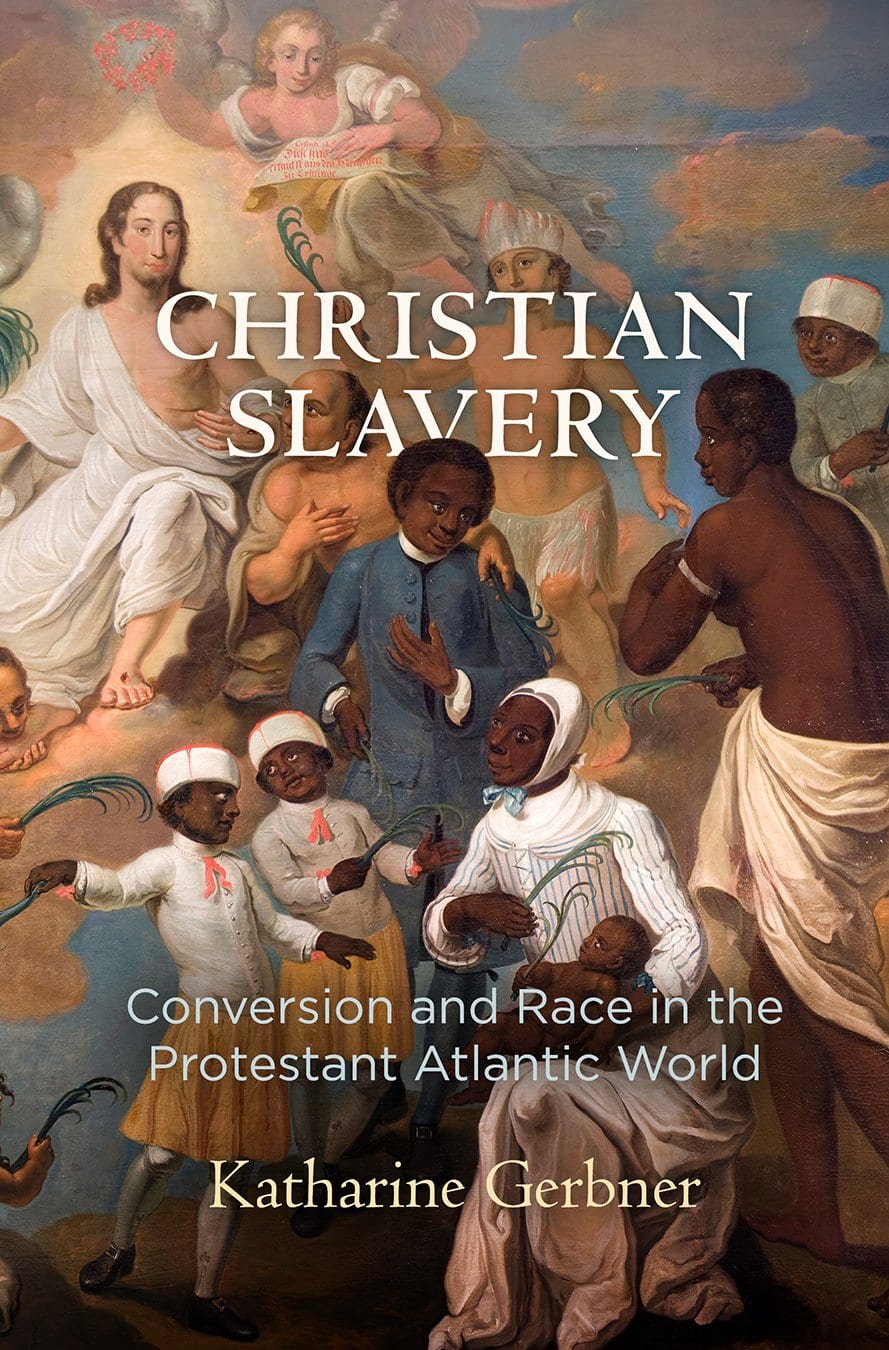 Christian Slavery: Conversion and Race in the Protestant Atlantic World

Christian Slavery: Conversion and Race in the Protestant Atlantic World

Could slaves become Christian? If so, did their conversion lead to freedom? If not, then how could perpetual enslavement be justified? In Christian Slavery, Katharine Gerbner contends that religion was fundamental to the development of both slavery and also race in the Protestant Atlantic world. She shows how the contentions between slave owners, enslaved people, and missionaries transformed the practice of Protestantism and the language of race in the early modern Atlantic world.

The second step complicated the first. Over time, an increasing number of enslaved and free blacks in the New World did convert, get baptized, and join a church. Their conversions undermined the foundations of Protestant supremacy by confounding the assumed bond between Christianity and white ethnicity. In response, the white plantocracy altered the definition of Christianity to include a wider ethnic diversity. However, they also altered the relationship between Christian identity and freedom, basing free status and social hierarchy no longer in religion but in race—i.e., no longer in their exclusive Protestant identity but in exclusive whiteness. In the 1690s and early 1700s, for example, they passed new laws in Barbados that excluded nonwhites from owning land, using racial categories rather than religion to establish the social hierarchy.

The third step is where the missionaries come in. Facing resistance from the plantocracy to evangelize slaves, missionaries of various Protestant backgrounds cast a vision for what Gerbner calls “Christian slavery.” They tried to assuage the fears of the plantocracy by arguing that Christianity and slavery were compatible, and that conversion wouldn’t grant slaves freedom or social equality. Many even promoted legislation that ensured baptism wouldn’t lead to manumission. They argued that while Christian conversion made slave and master spiritual equals, it had no bearing on social equality this side of heaven, which was determined by racial difference.

Moreover, rather than hurt the institution of slavery, they insisted that Christian conversion would produce harder-working, virtuous, and more obedient slaves. They advocated for Christian masters to assume a paternalistic role to care for the spiritual needs of their slaves like they would for their children, and to treat them more humanely with Christian virtue. Conversion would profit both slaves and masters. When properly done, they argued, Protestantism and slavery weren’t just compatible; they were conducive for the flourishing of a Christian society.

Gerbner’s book makes an important contribution to the history of religion and slavery in the Atlantic world. She draws on an impressive breadth of source material—from treatises on slavery and evangelism by leading religious leaders to legal codes, letters, church records, and missionary accounts from the Caribbean and North American colonies—and deftly sets her findings in conversation with the existing scholarship on the period. She doesn’t pick low-hanging fruit but instead builds her case researching the two groups that scholars have long assumed laid the groundwork for progressive Christian antislavery thought: the Quakers and Moravians.

At points her historical analysis could benefit from a deeper grasp of theology. For instance, she largely bases a major claim of her eighth chapter on what I think is a misreading of August Gottlieb Spangenberg’s 1788 account of Moravian missions. She interprets his story of a black woman’s conversion (73–76 of his Account) to mean that he outright opposed literacy for blacks and concludes that “Moravians redefine[d] ‘true’ conversion to exclude reading the Bible” (166).

She’s right that Moravians reduced the importance of teaching literacy to nonwhite converts over the years in order to placate elite whites who feared literacy would lead to slave rebellion. But she doesn’t address how the important and nuanced differences of Moravian understandings of Scripture informed Spangenberg’s account, and she missed his actual point—not that converts shouldn’t learn to read the Bible, but that literacy shouldn’t be a prerequisite for baptism. Spangenberg was merely reiterating a common evangelical impulse that faith is chiefly of the heart, not just the head.

Gerbner’s conclusion indicates that Moravians departed from the standard Protestant position that true conversion requires reading the Bible, but this wasn’t standard at all (they knew, of course, that the illiterate could hear the Word and be converted). Again, this doesn’t negate her main point, but closer attention to the theology might’ve sharpened it.

Her conclusion is haunting, and evangelicals should ponder it carefully:

The irony is dark and yet unambiguous: the most self-sacrificing, faithful, and zealous missionaries in the Atlantic world formulated and theorized a powerful and lasting ideology for a brutal system of plantation labor. (198)

Evangelicals engage culture with the gospel. But as this history shows, an evangelical penchant to compromise with the culture in order to achieve greater ends—like conversions or cultural influence—can often undermine the mission and reap lasting and destructive consequences. The gospel that should reconcile all peoples was compromised and weaponized to enforce racial hierarchy.

And if we’re tempted to think cultural compromise was a problem of the past and not consider its warnings for the way we go about church, missions, race relations, and cultural engagement today, woe to us.