In the age of social media we have more friends than ever, yet we lack depth and quality of relationship. Unfortunately, this seems to be true in the church as well as the larger culture. Yet there’s perhaps another and less obvious barrier to friendship than our screens and apps—sex.

In Why Can’t We Be Friends?: Avoidance Is Not Purity, Aimee Byrd writes that in response to our oversexualized culture, the church has unnecessarily made friendship between men and women controversial. Byrd frequently refers to a line from the movie When Harry Met Sally to articulate a false cultural assumption she believes has infiltrated the church: “Men and women can’t be friends because the sex part always gets in the way.”

Byrd, a Bible study teacher and cohost of the Mortification of Spin podcast, has experienced this assumption herself: “[T]he church sent messages that a woman’s attractiveness serves the purpose of landing a husband, then becomes a threat to all other men” (23). “My sexuality became a barrier to friendship,” she writes (23).

Highlighting the prevalence of sibling language in Scripture, she argues that we should see believers of the other sex as people with whom we can share meaningful friendships, rather than as objects of temptation with whom we may fall into affairs.

Avoidance Is Not Purity

Byrd explains that when Christians see their brother or sister as an object of temptation, they often feel anxious about “ordinary acts of kindness and business” with a person of the other sex (34). She also critiques larger-scale philosophies like the so-called Billy Graham Rule, which prohibits being alone with a member of the opposite sex other than one’s spouse. When we avoid interactions with people of the other sex, Byrd contends, we reduce them to their physical assets and fail to view them holistically as people created in God’s image.

She also argues that avoidance keeps us from experiencing the blessings of communion in sibling relationships with the other sex, and she rightly notes that avoidance alone doesn’t bring about purity, which is rooted in the heart by the Spirit.

Instead, Byrd encourages us to meaningfully engage in “sacred sibling” relationships by promoting one another’s holiness; practicing encouragement, exhortation, and intercession; suffering with one another; and sharing the table together.

Amid these sibling relationships, she challenges us to “rightly orient our affections” and deal with heart issues that would lead us into sin rather than relying on rules (77). If we relate to one another as fathers, brothers, mothers, and sisters as Paul instructs in 1 Timothy 5:1–2, Byrd says “we remove the possibility of sex” (14). 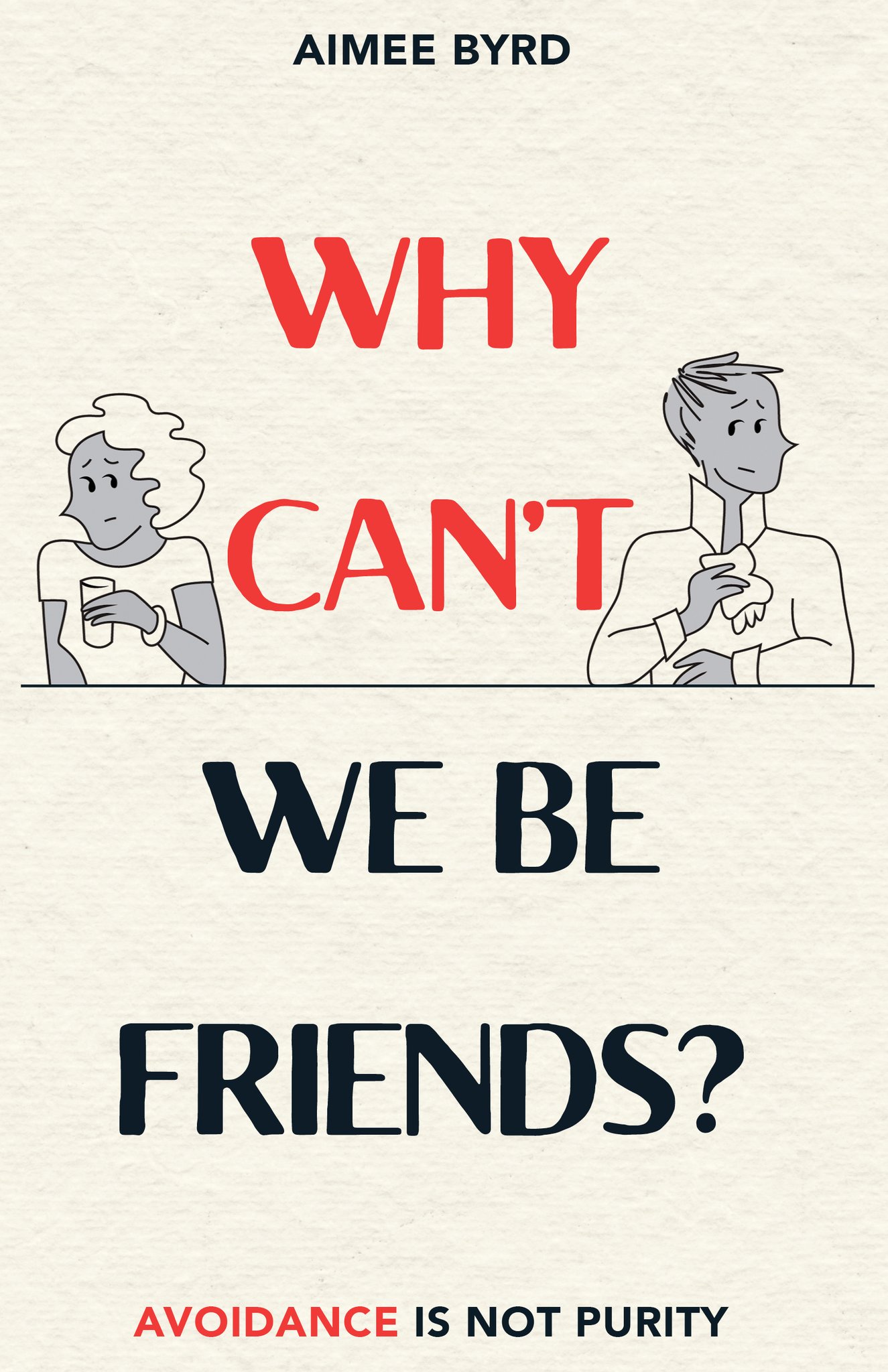 Why Can't We Be Friends?: Avoidance Is Not Purity

Why Can't We Be Friends?: Avoidance Is Not Purity

While Byrd offers a thoughtful consideration of biblical siblingship and rightly draws out heart issues, on this point I fear she goes too far. Though our sanctification enables us to avoid sin, so long as we remain in our fallen state, the possibility of any particular type of sin won’t be removed.

It’s certainly possible to go so far in trying to avoid sexual sin that we become pharisaical, potentially hurting others as well as ourselves. But it’s also possible to be overly optimistic about the likelihood of refraining from sin, particularly when placing ourselves in precarious situations.

Byrd is eager to destigmatize male-female friendship in the church, particularly friendships that involve time spent one-on-one. But she so frequently references sharing car rides and meals that it feels like she goes beyond defending those activities to almost implying people who don’t engage in them aren’t experiencing true friendship.

By contrast, I’m blessed to have meaningful friendships with men that have developed largely through meeting as couples. My husband and I have nurtured deep friendships with people of both sexes: we’ve shared life as neighbors, served together in our church, and been members of the same small group. One-on-one interactions aren’t inherently wrong, but neither are they inherently necessary. Riding alone in a car or sharing a table for two aren’t the only—or even best—ways to foster friendship in the church.

One-on-one interactions aren’t inherently wrong, but neither are they inherently necessary.

However, Byrd rightly points out that avoiding one-on-one situations can lead to unloving behavior. For example, Byrd references a time she was “in a strange city, at night, in the rain, walking down a sketchy alley when [she] could have been offered a ride” (26). Presumably a certain man didn’t give her a ride due to concerns about being alone with a woman.

Byrd was rightly offended by this man’s failure to help her, but disregarding his rule wasn’t the only way for him to care for her, as she might suggest. The man could’ve left her in a safe location, walked down the sketchy alley in the rain himself, and driven her car back to her. Most situations afford this type of option allowing a man to follow his conscience while still extending kindness to a woman.

In her criticism of the Billy Graham Rule, I find Byrd too focused on the idea that it communicates an oversexualized view of women as temptations. Many men, in ministry in particular, have these rules primarily to avoid false accusation and scandal, not because they view all women as temptations.

Though Byrd does briefly engage this concern, she’s quick to dismiss it, saying Jesus risked his reputation in his interactions with women. This is true—any interaction with women in the first century was potentially suspect—but we can be certain that Jesus conducted himself with wisdom and never put himself or others in the path of temptation. When we engage the other sex, we can do likewise.

Toward the end of the book Byrd writes, “Are we opposed to friendship? No—we are opposed to sin, and we are for holiness” (229). Amen. Where Christians have communicated by their behavior that members of the other sex aren’t valuable, we ought to repent and consider how we can treat others kindly. Where we have been the objects of overly zealous attempts to avoid sin, we ought to extend forgiveness and love. And where men have abused power and victimized women, let’s hold them accountable and strive to create environments that protect and defend women.

We should always try to believe the best about one another and leave room for individual conscience. So let’s assume our brothers are trying to honor their wives and not that they don’t value other women.

It’s clear from reading this book that Byrd loves the family of God and deeply desires that believers would enjoy the sweet communion of sacred siblingship. Her book can help us grow in experiencing appropriate freedom in our friendships.

May the Lord grant us wisdom to know how to enjoy the blessings of friendship in a way that will honor both our marriages and also our brothers and sisters in Christ—while ultimately bringing glory to him.

Winfree Brisley serves as an editor for The Gospel Coalition. She was previously the editor for Risen Motherhood. She and her husband, Will, have three sons and live in Charlotte, North Carolina, where they are members of Uptown Church (PCA).