Forget eternal life for a moment. Even with regard to mundane things, I consider myself blessed. I grew up with parents who didn’t divorce, with a dad who never lost his job, in a house from which we never moved. There was a sense of stability and place that I didn’t appreciate until I was grown.

I still live 25 minutes from my childhood home in rural middle Tennessee, where my parents continue to reside. I can walk into a gas station or a bank in my hometown and be almost certain of encountering people who know my name—or at least my father or grandfather’s name. I went through nine years at my local elementary school with a core of about 20 other kids, some of whom I also went to church with and played Little League baseball with.

Community life in small town 1980s Tennessee wasn’t perfect, but it was pleasant—at least in my privileged experience. But 25 years later it’s increasingly rare. It seems that no matter where you turn, you’re confronted with evidence that our society is unraveling. Simply scroll the comments section on YouTube or watch five minutes of cable news, and it’ll confirm any decline narrative imaginable. 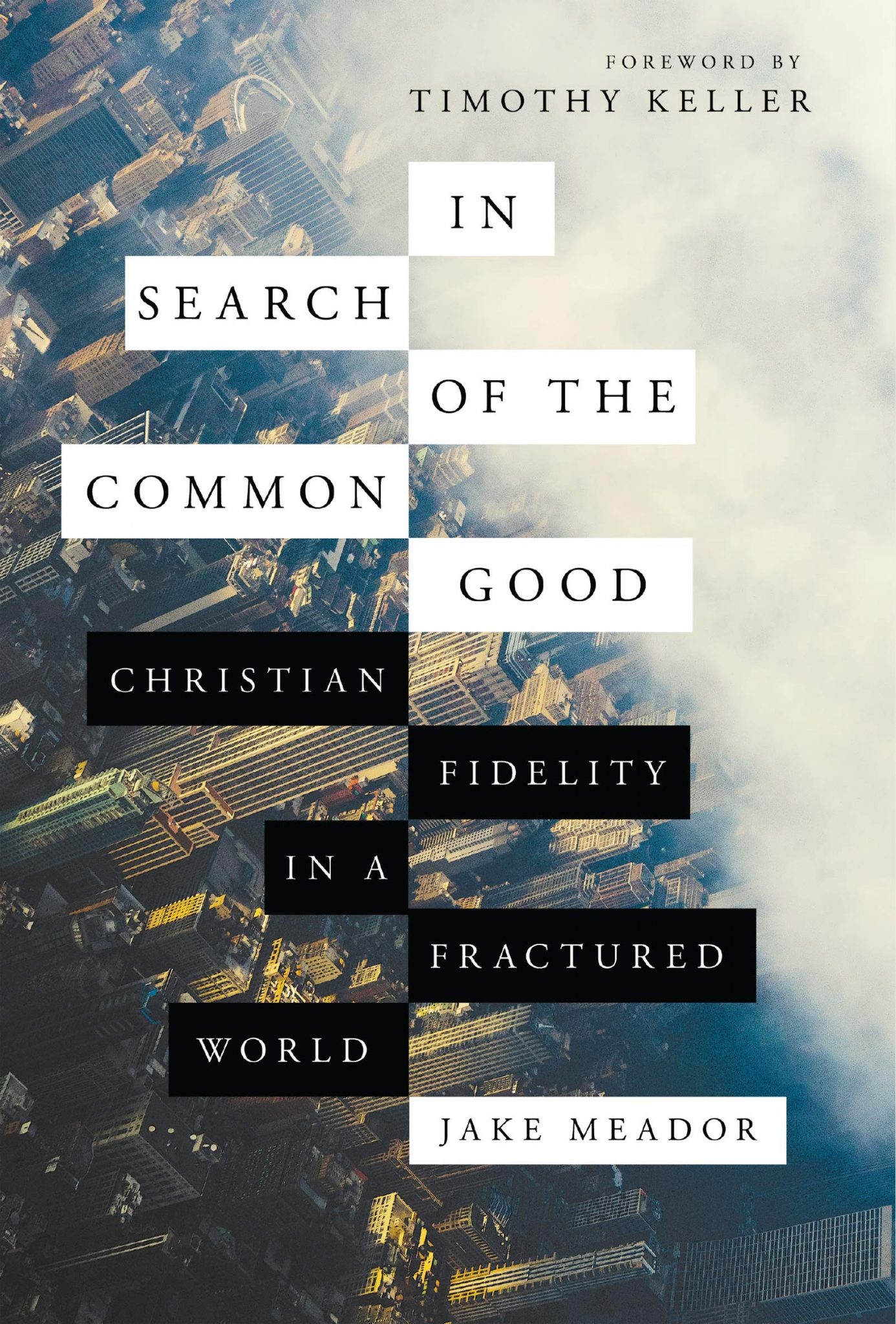 In Search of the Common Good: Christian Fidelity in a Fractured World

In Search of the Common Good: Christian Fidelity in a Fractured World

But there’s no need to rely on anecdote. For a while now, a growing number of concerned political scientists and other thinkers have been documenting this breakdown of civil society and its resulting loneliness and social pathology: Robert Putnam’s Bowling Alone, Charles Murray’s Coming Apart, and J. D. Vance’s Hillybilly Elegy, to name a few.

Perhaps things aren’t quite as bad as they seem—at least worldwide (see Hans Rosling’s recent book, Factfulness, for a balancing perspective). But in contemporary America, at least, certain unpleasant trends are hard to deny: rates of suicide and opioid overdose are up, marriage and birth rates are down. Real wages have stagnated, and civil discourse has plummeted. On the religious front, the last few decades have seen a fall in church attendance, accompanied by the rise of the “nones.”

The pressing question for the churches of America is this: How can we faithfully navigate these troubled waters? Jake Meador addresses this question in his debut book, In Search of the Common Good: Christian Fidelity in a Fractured World. Meador is the editor in chief of Mere Orthodoxy, an online journal dedicated to Christian cultural commentary. He’s also the vice president of the Davenant Institute, an organization committed to the retrieval of Christian wisdom in early and forgotten Protestant literature. In short, don’t let the “first-time author” thing fool you—he’s well equipped to write a book like this one.

That doesn’t mean you’ll agree with all of his diagnoses or proposals—I certainly didn’t. But it does mean that he’s worth listening to.

How We Lost Community—And How We Can Get It Back

In what I regard as the book’s single best chapter (ch. 2), Meador documents the increased loneliness and rootlessness that have resulted from the breakdown of the family and the loss of stable communities. Human beings simply aren’t designed to work this way.

As human creatures, we want to share our lives with other people. We want our lives to have witnesses. And witnessing another person’s life requires more than simply sending them short messages via an electronic device. It requires time. It requires physical presence. It requires affection. (37)

What has gone wrong? Meador’s basic argument is that for the last few centuries, we in the West have been believing the wrong story. It’s what he calls the “modernist story,” America’s “dominant narrative” (46). It’s a narrative of liberty, of the ongoing effort to liberate autonomous individuals from what are thought to be “unjust restraints on their freedom” (50). Unfortunately, the modernist story defines individual freedom in a way that ignores (or denies) our creaturely limits and communal nature, and by doing so “destroys the very things that make freedom possible” (63). And in Meador’s telling, the results have included everything from abortion on demand, transgenderism, and secularization, to climate change, income inequality, and boredom.

The most important political action Christians can engage in is simply practicing ordinary Christian piety.

If we’re to survive and thrive amid this unraveling, Christians must re-embrace an older and better story—a story of human beings created in God’s image to glorify God by loving both him and our neighbors. To be sure, there is great freedom in this story, but it’s a freedom within limits that recognizes the givenness of created things, including human nature, natural law, and our need for community.

Therefore, the most important political action Christians can engage in is simply practicing ordinary Christian piety—practicing the Sabbath, making ourselves at home in the world, and, as much as possible, giving ourselves to good work. (106; see 105–54)

Such a mundane program will remind many of Rod Dreher’s The Benedict Option. Despite the overlap, Meador’s book has a much more optimistic feel than Dreher’s. He never advocates political withdrawal, but instead political realignment, outlining a “Christian vision for political life” (160), including concepts like solidarity, sphere sovereignty, and subsidiarity (162–67).

He ends the book with a moving account of the eternal city where heaven and earth will be one, and true community will finally exist untainted in full communion with God. This is the end of the Christian story, and our ultimate hope in our search for the common good.

Of Capitalism, Tradeoffs, and Nostalgia

In Search of the Common Good deserves a broad readership. If there’s a downside for Meador, it’s simply that he has set the bar so high with his first book that it’ll be hard to improve on.

But let me register some minor concerns on disputed questions. Almost all of my misgivings boil down to the fact that I have a higher opinion of capitalism than Meador does—or better said, I view it as the worst economic system available, except for all the other ones.

My early reading in economics has left me warmer toward capitalism than Meador is. Moreover, it has left me (perhaps permanently) suspicious of nostalgia—at least for any post-fall good old days. In this regard, Meador’s treatment of “good work” often seemed imbued with what Jay Richards calls the “nirvana myth”—the practice of comparing capitalism with an unrealizable ideal rather than to its live alternatives. My margins are littered with comments like “Compared to what?”

Meador recognizes that in a fallen world our work will be dogged by frustration (130–31). But he often tends to speak as though the fall (at least for work) didn’t occur until the Industrial Revolution. While occasionally recognizing the imperfections of premodern life (74–75, 90), the overall picture he paints seems idyllic compared to the bleak and alienated nature of modern labor. It’s not that he doesn’t recognize the tradeoffs involved—it’s just that he’s better at pointing out what has been lost (76) than expressing gratitude for what has been gained.

Unlike Meador, I identify with the pastor who told his parishioners, “Who you work for is more important than what you do” (150). No doubt this pastor, like Paul, would encourage low-skill, low-income workers to better their lot where they could (1 Cor. 7:21). But I suspect his main goal was to offer a Master to please rather than a machine to rage against. And lest I be accused of turning religion into an opiate for the downtrodden, let me add that I’m all for finding ways to help low-wage workers—indeed, I suspect that both Meador and I would appreciate some of the ideas of Oren Cass.

But even here, trade-offs must be recognized. Policies that might benefit America’s blue-collar workers (such as trade protections) might adversely affect the poor in the majority world (Christian economists have often argued that free international trade is good for the poor worldwide). I confess I don’t currently have the answer, and my journey away from libertarianism has included a willingness to view free trade along more prudential lines, as I suspect Meador would view it.

But though he focuses mainly on local solutions, it’s clear from his discussion of subsidiarity that he has a place for doing things together on a larger scale that can’t be done well on a small scale—which for him could potentially include a “single-payer health care system” (167). For Christians who say that such “big government” projects go beyond the purposes of government and impinge on property rights, Meador has already argued that “the Christian tradition has unanimously affirmed that property rights are always qualified by the claims of the needy upon them” (99). But eventually Christians are bound to ask whether the claims of the needy should end at the national border, and whether the claims of the majority-world poor should have any bearing on our views of national policy, and if not, why not? This concern is commonly voiced by Christians disaffected with the Republican Party under President Trump.

I’m not suggesting a straight line between the Christian story and trade (or immigration) policy. Indeed I’m generally wary of “gospel-centered solutions” to complex public policy questions, as I usually suspect them of being attempts to baptize one’s own political positions. I’m simply saying that there’s more work to be done.

But that kind of intellectual work is painfully slow. In the meantime, do yourself a favor and read Jake Meador’s new book.