Books about global statistics and trends tend to moonlight as insomnia medication. However, Hans Rosling’s Factfulness: Ten Reasons We’re Wrong About the World—and Why Things Are Better Than You Think, written with the help of his son and daughter-in-law, Ola Rosling and Anna Rosling Rönnlund, is something of a page-turning thriller. How is that possible? 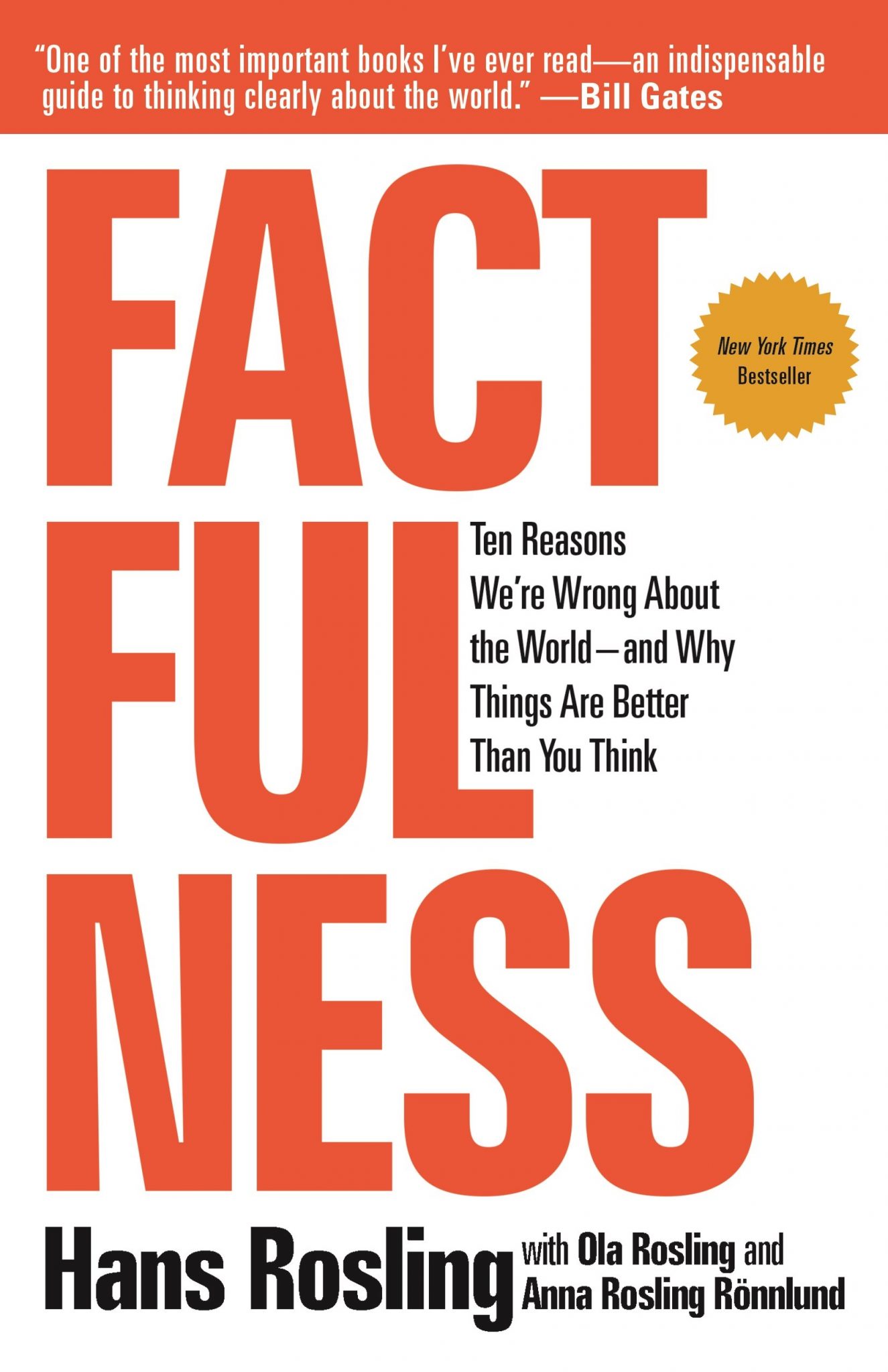 Factfulness: Ten Reasons We’re Wrong About the World—and Why Things Are Better Than You Think

Factfulness: Ten Reasons We’re Wrong About the World—and Why Things Are Better Than You Think

Such books also suffer an inevitable fate: In the blink of an eye, every chart and data set becomes obsolete, requiring endless new editions. Factfulness will prove useful a generation from now, even if it never produces a second edition. How is that possible?

The recently deceased Rosling, a Swedish global health expert and TED talk phenomenon, seemed an older male version of Pollyanna, a naïve optimist bursting with enthusiasm about his state-of-the-art “bubble charts” that show the world getting better on nearly every available metric. He was actually a determined realist who preferred the term “possibilist.” And with this posthumously published book, the “possibilist” achieved the seemingly impossible: a gripping and evergreen book about global statistics and trends.

This he accomplishes by a stroke of genius: Instead of just a book about facts (there are metric tons of those, brilliantly delivered and derived almost entirely from official United Nations reports), he writes about the minds that interpret the facts. Namely, he identifies 10 fallacies of thought that conspire to blind us to reality. He calls them mental “instincts,” and he gives them helpful labels: “The Gap Instinct” (imagining yawning chasms between “us” and “them,” “here” and “over there”), “The Straight Line Instinct” (imagining that trends continue in straight lines), “The Blame Instinct” (always searching for a nefarious single cause), and on and on it goes. Factfulness is about mind-altering facts—many of its charts simply blow the mind, particularly pages 60–63—but it’s also about minds that alter facts.

Factfulness is about mind-altering facts—many of its charts simply blow the mind, but it’s also about minds that alter facts.

And because the book isn’t primarily about the data and the charts, but rather how data and charts illuminate perennial fallacies, Factfulness will retain all of its intellectual punch long after the actual charts are outdated. Bill Gates was hardly exaggerating when he blurbed: “One of the most important books I’ve ever read—an indispensable guide to thinking clearly about the world.”

There are weaknesses. In a book devoted to whether things are good or bad, better or worse, Rosling makes no attempt to provide an actual moral standard by which we can judge what is “good” or “bad”; he simply assumes moral intuition on the part of readers. There is no ethical “underwriting” for his project. For the most part, this is understandable and unobjectionable—few people view poverty, disease, and infant mortality as good things.

But some topics aren’t so obvious. Is it a good thing that the birthrate has dramatically fallen throughout the developing world? It depends. On the one hand, it indicates lower infant mortality (impoverished people keep having children because they expect many of their children to die) and an increase in economic opportunities for women. Fewer children seems an ideal for Rosling (not that he is worried about “overpopulation”—you’ll have to read why), but he never grounds that ideal ethically, nor does he address the unavoidable tradeoff: widespread below-replacement-level birthrates forecast future economic decline.

The crisis someone is trying to sell you today most likely isn’t. Don’t click.

Related, in this regard, a short passage on abortion sticks out like a sore thumb:

Across the world today, women and girls are still being made the victims of religious condemnation of abortion. When abortion is made illegal it doesn’t stop abortions from happening, but it does make abortions more dangerous and increase the risk of women dying as a result. (218)

The 160 million females—specifically singled out for their femaleness—eradicated globally by abortion might have had something to say about who is victimizing whom. Rosling never explains why high abortion rates signify progress; he just assumes that autonomy equals “good.” Strikingly, this is one of the few places in the book where Rosling provides no accompanying data or charts. In 1974 Sweden outlawed almost all abortions after 22 weeks; has it seen a dramatic rise of women dying from dangerous illegal abortions? No. Thankfully, this kind of unsupported dogma is rare in the book.

Rosling’s enthusiasm for progress sometimes blinds him to the fact that occasionally societies regress right before our eyes. Religion is a complete afterthought for him, not relevant to anything he wishes to measure in a society. But it is a fact that 50 years ago women all across the Muslim world, from Cairo to Kabul, posed for photographs with visible faces, beautiful and smiling. The rise of radical, fundamentalist Islam has altered that picture in the extreme. You can ignore the role of religion in the “progress” of societies, but only by refusing to look at it. It’s polite and maybe particularly Swedish, but it’s not objective or honest.

The strengths of the book vastly outweigh the weaknesses. It’s mesmerizingly well-written, and for Christian believers it contains a few vital lessons. Too often Christians embrace a “sky is falling” cataclysmic view of world history (it’s never been worse!) that is every bit as wrong and extreme as that of the utopian progressive activist who seems to threaten them. Rosling provides an eye-opening corrective, factually and intellectually: The world is getting better, by far, but our minds won’t always allow us to see and acknowledge it.

Rosling skillfully articulates how all of the incentives (economic, status, and otherwise) in media culture and related institutions reward the proliferation of crises that distort understanding. At a time when we’re so emotionally vulnerable to clickbait, daily outrage, and a thousand other perhaps well-intended yet panic-inducing emotional manipulations, Rosling provides invaluable intellectual and factual tools to widen our perspective. The book is a veritable how-to manual to accompany the famous British World War II poster: “Keep Calm and Carry On.” The crisis someone is trying to sell you today most likely isn’t. Don’t click.

Rosling’s book should be used as a resource for the cultivating gratitude. Gratitude should, in turn, make us into cheerful contributors of even more progress.

Consider this maxim, for example: Things can be bad and better at the same time. Yes, the snapshot view of a particular injustice or state of affairs can appear intolerable. But the better question is, “Compared to what?” If we back up the film and view the context before this particular frame—that is, if we look at the trend of said injustice or state of affairs, we will see something different. Yes, extreme poverty is intolerable. But did you know that it has nearly been eradicated globally in just the last few decades?

You can do your own thought experiment on any number of things. Race relations in America can be characterized as bad. But follow up on that thought: Compared to what? Compared to a Civil War that killed more than a half-million people and the dehumanizing segregation that followed, we have so much to be grateful for. Things can be bad and better at the same time. Rosling’s book should be used as a resource for the cultivating gratitude. Gratitude should, in turn, make us into cheerful contributors to even more progress.

Christians should be students of the Word, and also of the world. Rosling is measuring the progress of societies over time and that means he’s really measuring the movements of God’s providence. That is a great service, and it can keep us from being blown about by every wind of hysteria. I’d recommend this book to anyone and everyone, high-schoolers and retirees alike. We all need to be made aware of our blind spots and gain wider perspective.

The bonuses are that you won’t be able to put it down, and it will reward you when you read it again long after the charts need updating.