Discoveries of never-before-seen manuscripts written by historic figures are rare outside the pages of conspiratorial fantasy fiction. With the obvious exception of something like the Dead Sea Scrolls, such discoveries tend to be more noteworthy for the sheer curiosity of how the lost treasure was found than for its actual substance. After all, there’s probably a reason an author left a certain manuscript unpublished, and sometimes the reason is simple: The material isn’t very good.

The publication of Herman Bavinck’s Reformed Ethics: Created, Fallen, and Converted Humanity is a striking exception to this rule. The actual contents are equal to the excitement of its discovery.

First, a brief summary. In 2008, while working in the Bavinck archives at the Free University of Amsterdam, Dirk Van Keulen stumbled on what amounted to a 1,100-page handwritten manuscript by Bavinck (circa 1884/5) titled Reformed Ethics. Bavinck at one time had clearly intended this to be a companion to his monumental four-volume Reformed Dogmatics, yet he mysteriously never published it.

In the 10 years that followed this discovery, John Bolt, along with Van Keulen and a team of other scholars, carefully transcribed, translated, edited, and have now published volume one of a projected three. Consider the herculean task of deciphering handwritten citations, outlines, cryptic notes, and phrases in five languages in addition to Dutch; tracking down sources; and sometimes even reconstructing and amplifying difficult portions of Bavinck’s text.

The final product reveals 10 years of labor well spent. One expects a fragmentary text full of unfinished ideas, but it’s anything but fragmentary. Bolt assures readers that despite a sometimes significant editorial hand, “[Y]ou are hearing the genuine voice of Herman Bavinck, including prejudices we might not share and claims with which we might disagree” (xiv).

This is a monumental achievement, and congratulations and gratitude are owed to all involved.

And there is no doubt about that voice. All of Bavinck’s signature hallmarks are on display. Here are a select few.

First, truly astounding scholarship: The depth and breadth of his historical theology (particularly in this volume, the theology of the Reformed scholastics) is amazing; his biblical-theological surveys of Scripture, thorough; his exegesis of original languages, sophisticated; his insight into modernity, penetrating. Occasionally he seems old-fashioned, such as references to the “four humors,” “physiognomy,” or the somewhat amusing belief that Germans are somehow more prone to gluttony and alcoholism! Yet far more often Bavinck seems eerily contemporary:

Inconstancy is also the great disease of our age—agitation, restlessness. This is manifested in many forms . . . in the perpetual reconstruction of history that tears people from their own history, from tradition, from the inheritance of previous generations. The result is a loss of piety and a severing of the bonds of the past (revolution) in exchange for the subjective, self-pleasing egocentricity and individualism. . . . [I]t occurs in the intentional doubting of everything, the banning of faith, with each person standing naked and alone. Doubt has been made the beginning and condition of knowledge. (126)

Is this directed to a 19th-century audience or to 21st-century postmoderns? In God’s providence, clearly both.

Second, Bavinck has written an unapologetically Reformed ethics. He eschews both “philosophical” ethics and also natural theology (23–27)—which, true as they may sometimes be, nevertheless seek to ground moral norms on foundations other than Holy Scripture. Moreover, Reformed dogmatics shapes his ethics, as well; the Augustinian (and Calvinist) doctrine of God isn’t incidental to ethics, but its very source. Here is a characteristically challenging passage:

All Pelagianism must be rooted out; it is simply anti-ethical. It is precisely because God is everything that humans are truly great. There is no division of labor here where God does his part and we do ours. Not at all! We establish our calling precisely because God works all in all. This is a mystery: just because God is everything, we can be great. A mystery, yes, but far better this mystery than a Pelagian, Remonstrant slice of the Gordian knot that divides God and humanity so that God cannot be God and human beings cannot be genuinely human. (22–23) 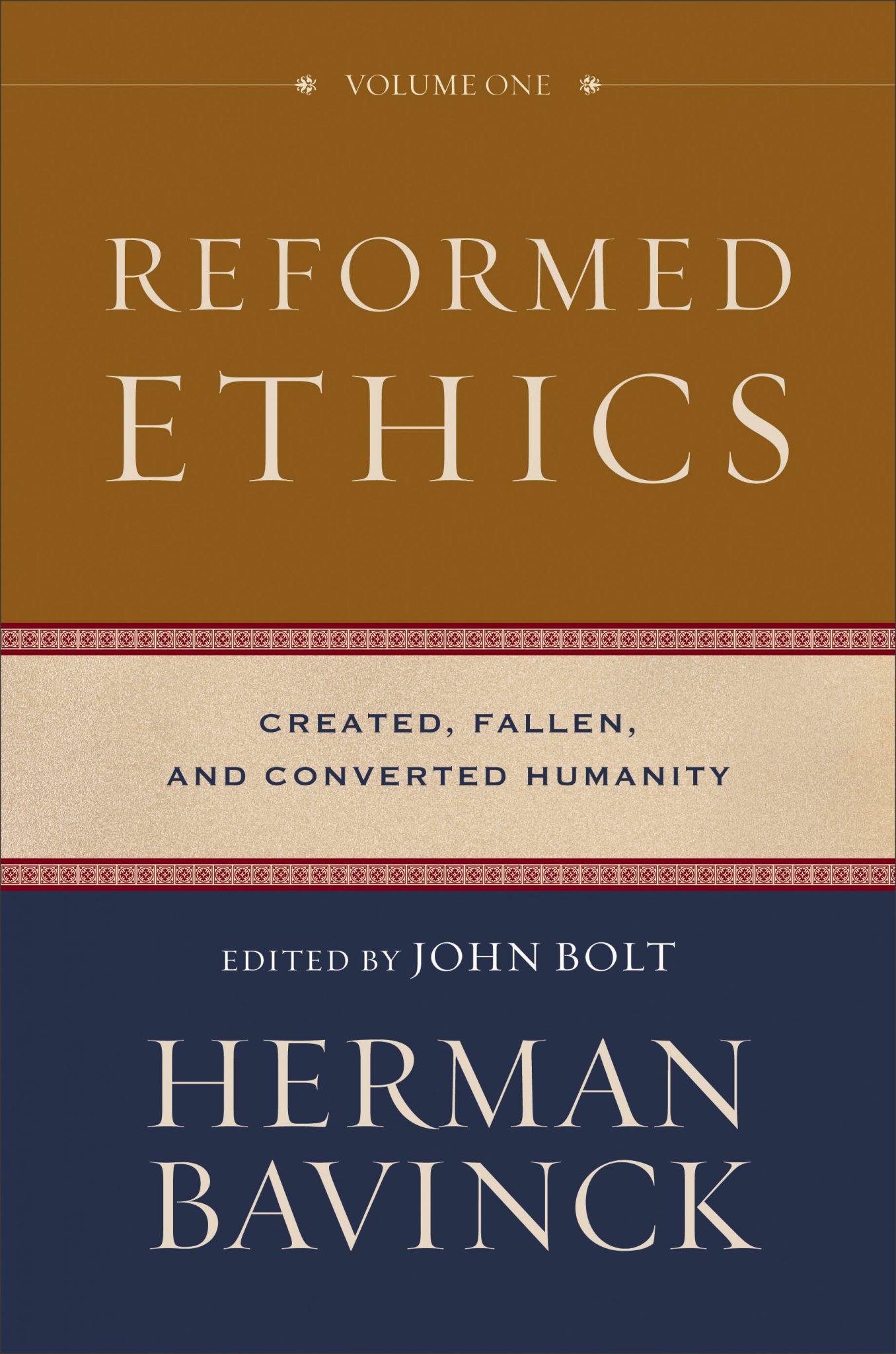 Herman Bavinck’s four-volume Reformed Dogmatics is one of the most important theological works of the 20th century. Leading Bavinck expert John Bolt edited that work, which has received wide acclaim. Now Bolt brings forth a recently discovered manuscript from Bavinck, in print for the first time, which serves as a companion to Reformed Dogmatics. Reformed Ethics mines the moral teachings of the early church and medieval and Puritan spirituality while addressing a variety of topics, offering readers Bavinck’s mature reflections on ethical issues. This book is the first of three planned volumes.

The Augustinian (and Calvinist) doctrine of God isn’t incidental to ethics, but its very source.

Third, Bavinck continues his lifelong scholarly pursuit toward an “organic” understanding of created reality and, more particularly, human nature. Always in view is human beings “as a whole” corrupted by sin. He finds the root of sin in idolatry:

Sin consists concretely in placing a substitute on the throne. That substitute is not another creature in general, not even the neighbor, but the human self, the “ego” or “I.” The organizing principle of sin is self-glorification, self-divination; stated more broadly: self-love or egocentricity. (105)

So relentlessly does he then trace sin’s pathways to every destructive fruit of ungodliness that readers will yearn for the next section, on “converted” humanity. Knowledge of the law drives one to Christ! If anyone doubts the Reformed doctrine of total depravity, chapters 2 through 6 should forever alter that. This holistic fall into sin requires a redemption and transformation equally holistic: Bavinck gives no priority to mind, emotions, or will. All human faculties are fallen, and Jesus Christ, by the work of the Holy Spirit, must transform the whole person. The final section of chapter 9 (“How the Spirit Works”) is a master class of biblical interpretation.

Bavinck’s emphasis on the “organic” is always a reaction to fragmented, “mechanical,” or dualistic views of reality and human nature. So many errors flow from what he calls “one-sidedness,” such as an undue emphasis on the intellect (rationalism), the emotions (mysticism), or the will (moralism). In that regard, perhaps most powerful and challenging is chapter 11, “The Pathologies of the Christian Life.” It feels as though Bavinck has been caught on a “hot mic” speaking his private thoughts. The usually polite and irenic theologian denounces the besetting sins of various Christian traditions. No one is spared, and readers of all stripes will find something that ought to chasten them: for the Reformed, their sins of “orthodoxism”; for the Pietist or charismatic, the sins of mysticism; for various kinds of activists (he takes aims at the Methodists of his day), the sins of moralism and fanaticism. It’s an eye-opening, bracing, and stinging rebuke every bit as relevant today as it was in 1885.

It’s difficult to predict the scholarly “career” of a book just launched, but it makes an immediate contribution to an ongoing simmering debate over Bavinck’s appropriation (or lack thereof) of Thomas Aquinas, scholasticism (medieval and Reformed), and the Aristotelian method. In fact, there appears some slight puzzlement (perhaps even discomfort?) among the editors on this score. In his introduction, Van Keulen quotes a few favorable lines about Thomas, but not from the present book; rather, they are taken from contemporaneous student notes (xxxviii). Bolt likewise includes a footnote suggesting that Bavinck may have misunderstood Thomas and that there may be, in fact, “an affinity” between the two (36n12).

This is worth noting because in the actual text of Reformed Ethics, one finds Bavinck’s most robust criticisms to date of Thomas, scholasticism, and the Aristotelian method (424–26)! And the root of his criticism is that they failed to regard Scripture as the “methodological norm for reflecting on dogmas” (425). This is a repeated theme:

Since we are talking of theological ethics, there can be only one source of knowledge that discloses to us God’s viewpoint. And then, having abandoned natural theology, we have only Holy Scripture as the source. Scripture is the rule for teaching/doctrine and life.” (26)

The publication of Reformed Ethics is certain to fuel continued significant debate among neo-Calvinist and Thomist scholars over these matters.

This is a large and weighty book, and many readers will have difficulty proceeding from cover to cover. There are lengthy passages parsing, for instance, the difference between “morality” and “religion,” or the nature of self-consciousness and the soul. But that shouldn’t deter the pastor or layperson. This isn’t a dry compendium of moral casuistry; there is deep spiritual profit to be found throughout. For example, Bavinck’s chapter on the perseverance and assurance of faith (ch. 10) is a balm for every anxious soul, and his frequent and thorough litanies of Scripture passages are like waterfalls of priceless jewels.

“Priceless” is an apt word for the whole: Van Keulen unearthed a treasure trove, not simply because they’re the long-lost words of a revered theologian—treasure enough, to be sure. Rather, because they’re Bavinck’s profound and mature reflections of how the true “pearl of great price,” the gospel of Jesus Christ, is also a leaven that transforms our own minds, hearts, and hands and brings them to the destiny our triune God has always intended: to be his image and likeness. By keeping this work from public view, Herman Bavinck allowed God to decide the timing for his Reformed Ethics. After more than a century, the time is now.