In 2016, J. D. Vance’s Hillbilly Elegy [read TGC’s review] was hailed for explaining the “Trump voter” to The Wall Street Journal and The New York Times readers on the other side of America’s class chasm. Vance explained his family’s slide into dysfunction, aided in part by dried-up factory jobs. White-collar professionals far from Appalachia devoured the book and testified to their newfound empathy for the working class.

Now meet Hillbilly’s wonkish cousin who works for a think tank, The Once and Future Worker: A Vision for the Renewal of Work in America by Oren Cass. Like Vance, Cass writes to one side of America on behalf of the other. He explains why a good job is hard to find for more and more of our countrymen, especially those who don’t aspire (or aren’t able) to work in knowledge industries. He pleads for new policies that will create a new kind of labor market.

Problem with Our ‘Prosperity’

The Once and Future Worker follows a problem-solution script. To explain the problem, Cass tells the story of how two economic ideas converged to create a problematic “prosperity.” First, Gross Domestic Product (GDP) became the favorite indicator of economic health. GDP tells us how much the economy as a whole is producing, the size of our “economic pie.” As GDP grew in the 20th century’s postwar booms, the second trend took hold: the rise of the American consumer. Of course, every individual is both producer and consumer, but public policy focused more and more on encouraging consumption.

Cass names the child of these two ideas “economic piety”: grow the pie (GDP) and make sure everyone gets to eat their fair share (consumption). And it worked! We have the world’s biggest economy. Our standard of living is higher than any before in history, providing affordable comforts like flat-screen televisions and smartphones for all. Our social safety net makes sure everyone gets a slice of the pie. We’re the most prosperous society in history, so what’s the problem?

The problem is what’s missing. Economic piety ends up sounding something like this: So long as the economy as a whole is producing (GDP), we don’t care if each individual is able to produce. We only care if she is able to consume. But “consumption without production creates dependence and debt,” whereas production (work) is good for individuals and communities in ways that can’t be neatly tallied. A prosperity that doesn’t include the ability to work is no prosperity at all. 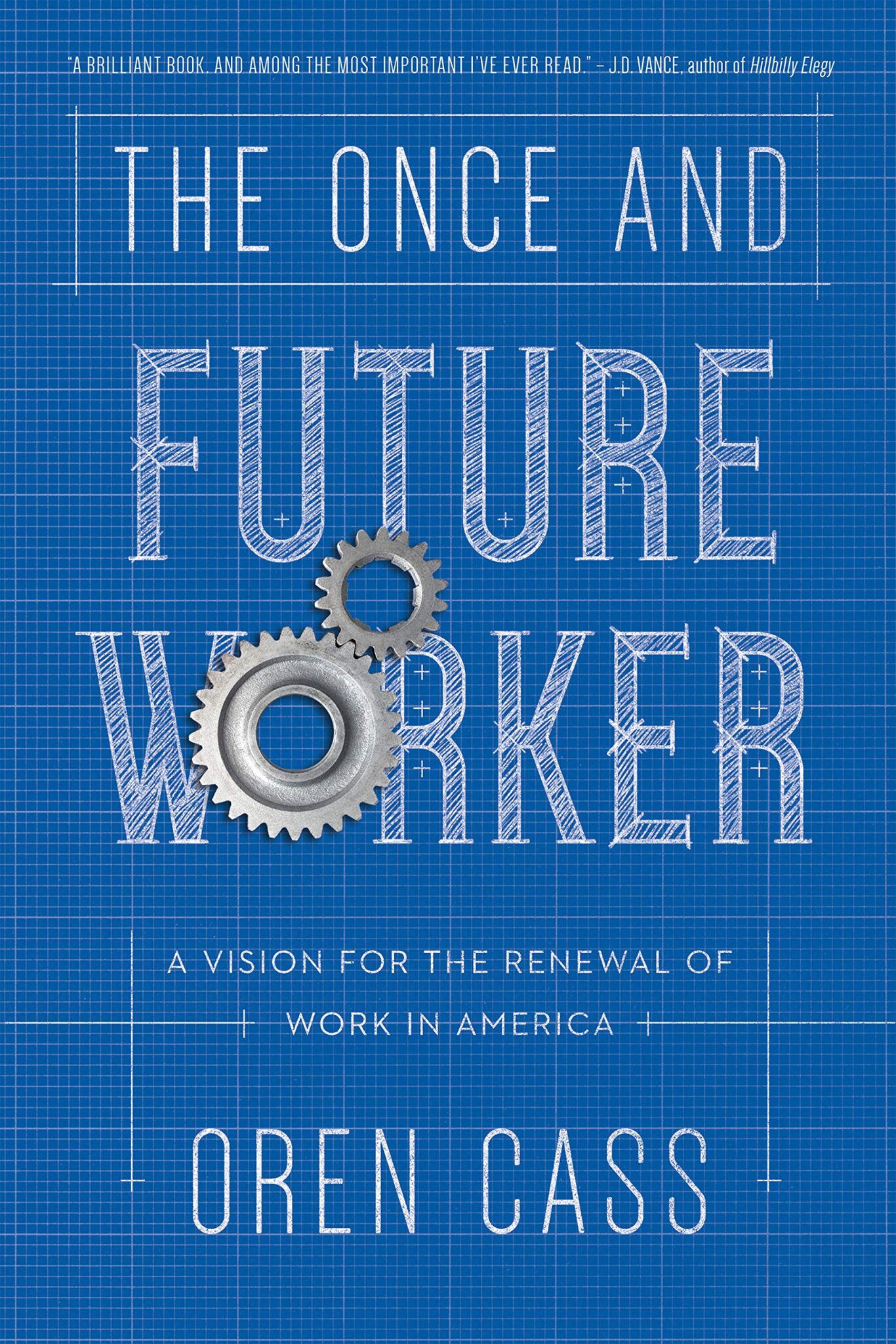 The Once and Future Worker: A Vision for the Renewal of Work in America

The Once and Future Worker: A Vision for the Renewal of Work in America

In this groundbreaking re-evaluation of American society, economics, and public policy, Oren Cass challenges our basic assumptions about what prosperity means and where it comes from to reveal how we lost our way. The good news is that we can still turn things around—if the nation’s proverbial elites are willing to put the American worker’s interests first.

Economic piety ends up sounding something like this: as long as the economy as a whole is producing (GDP), we don’t care if each individual is able to produce.

A better prosperity would ensure that everyone is productive. It would provide ways for laborers and their families to live self-sufficiently and contribute to the common good. The thick part of the book, then, is a raft of policy proposals to encourage work and self-sufficiency. Cass explains how environmental policy, education, immigration, labor law, and entitlements all affect the labor market. For each area, he proposes changes or new policies to get blue-collar Americans working again.

The Once and Future Worker is written for a broad, politically informed audience. I see several reasons to hope that Christians will be part of the readership.

First, its underlying premise is consistent with biblical wisdom. Cass is noticeably silent on philosophical or religious claims to support his assertion that work in inherently good. He states it as a matter of fact, then cites a convincing array of research. In taking this route, The Once and Future Worker sits in the “common sense” tradition that has long dominated American public dialogue, where self-evident truth plus more evidence is the way to persuade.

But this approach still leaves nagging questions: Why is a person’s work worth more than their tiny, fractional addition to GDP? Why is consumption without production bad for people? Thoughtful Christians will know the answer, for Cass’s findings ring with echoes from Eden. “Be fruitful and multiply and fill the earth and subdue it” (Gen. 1:28). Work is part of how we image God.

Work is part of how we image God.

Something is lost if this is left unsaid. I couldn’t help but wonder that if a culture loses sight of the dignity of work (grounded in the dignity of each individual, which is grounded in the image of God), is it any wonder that they create a “prosperity” that leaves some people without dignity? I’m not suggesting that Cass should have made this point. I’m suggesting that Christians should make it; we have unique wisdom to offer, sourced in Scripture, that isn’t common sense but is essential to the common good.

Even when we see the God-given dignity of work, we might not know how that dignity translates into policies and politics. This leads to the second reason The Once and Future Worker deserves reading: It’s a crash course in “how things work!” In sections on the environment, education, immigration, labor law, and the tax code, I left with a better understanding of how our current policies came to be and their effect.

Cass’s question is always, “How does this affect laborers?” How does our education system prepare—or not prepare—people to find sustainable work? How does immigration policy affect immigrants and existing workers?

Looking through this lens leads Cass to conclusions that challenge orthodoxy on both the left and right. His most audacious chapter proposes a wage subsidy, that government should sometimes “pay for jobs.” He argues this would be more effective than the anti-poverty programs loved by Democrats, but he also allows that it would intervene in the free market often celebrated by Republicans. (Although he is essentially conservative, much of Cass’s quibble is with libertarian-leaning Republicans. The most robust critique of his ideas has also come from that stream.)

How is wrestling with all this helpful to Christians? Perhaps it could introduce more subtlety into our political logic. For example, in a chapter on the environment and the economy, Cass shows how stricter air-quality standards have curtailed manufacturing, which means there’s a trade-off between cleaner air and jobs. Based on Genesis 1–2, I’ve long believed in creation care, and I’ve tended to support environment-friendly policy. But what about the value of a stable, well-paying job to a blue-collar worker? Isn’t this also an implication of Genesis 1–2? This I had not seen as clearly, and Cass’s analysis left me chastened.

This leads to the last reason The Once and Future Worker deserves reading. Cass knows why I’m inclined to see the value of clean air but miss the value of a blue-collar job. It’s because I’m not blue-collar. As an educated knowledge worker, America’s job market serves me just fine. In a recent interview, he noted:

What we’ve done is to build a society oriented entirely toward the needs and preferences of highly educated people. We’ve created the conditions for a labor market in which those people do really well. If you go back to that list of policy areas I mention in this book for altering labor market conditions to create more of the jobs we need, they were mostly areas where the people who are thriving would have to make concessions for the sake of others.

I’m guessing that many of my fellow TGC readers are among the educated, “doing okay” crowd. The Once and Future Worker was a cross-cultural education for me. As Christians, we more than anyone else, should want that.

Hunter Beaumont is lead pastor of Fellowship Denver Church and serves on the board of Denver Institute for Faith and Work and Acts 29 U.S. West.