Over the last 75 years, American evangelicals have become increasingly active in poverty alleviation. This is one of the great achievements of Carl Henry and Billy Graham’s “neo-evangelical” vision, forcefully introduced by Henry’s 1947 watershed book The Uneasy Conscience of Modern Fundamentalism.

Fundamentalists, Henry said, were like theologically precise priests passing by a dying traveler. They complained about the theological bankruptcy of the “social gospel” but didn’t have their own program for addressing social evils. Henry identified fundamentalism’s own theological poverty as the culprit. They lacked a coherent doctrine of the kingdom of God, even though it was at the core of Jesus’s preaching. They couldn’t differentiate the “now” from the “not yet” of the kingdom, and thus had no vision for how it transforms the present social order. Evangelicals should recover the supernatural kingdom that the social gospel denied and fundamentalism forgot, then apply that kingdom to all the world’s problems.

This they did! In the seven decades since Uneasy Conscience, evangelicals have grown a social program, a joint venture of scholarship and activism. For its part, evangelical scholarship has contributed to a growing consensus on the kingdom of God. In symphony, evangelical activism has built ministries of poverty relief, community development, racial reconciliation, abortion prevention, and sex-traffic fighting.

But in recent years, this movement has been going through a midlife crisis. Is all our activity actually doing good? Why do some of the people we’re trying to help stay stuck in poverty?

Brian Fikkert embodies the best of this tradition and its reevaluation. His work at Chalmers Center lives at the intersection of scholarship and activism. When Helping Hurts, his 2009 book coauthored with Steve Corbett, was an awakening for many readers to the notion that not all “doing good” does good. (See Sarah Zylstra’s feature story, “‘When Helping Hurts’: How One Book Changed Care for the Poor.”)

Just as Uneasy Conscience had called for, When Helping Hurts started with a robust vision of God’s kingdom and examined poverty through that lens. Along the way, it argued that much of what’s done to “help the poor” actually harms both the helped and the helper since it ignores key dimensions of the kingdom.

Ten years later Fikkert is back, now with Kelly Kapic, in Becoming Whole: Why the Opposite of Poverty Isn’t the American Dream. Fikkert explains in the preface that the new book is intended as an improvement on WHH. Many readers of WHH were convinced that they needed to reexamine their efforts, but they still didn’t know how to differentiate the helpful from the hurtful. Becoming Whole wants to give them a “more systemic model” of change and “a common set of lenses through which they can view any poverty alleviation effort” (14).

Fikkert and Kapic begin by noting that all poverty alleviation assumes a story about how the world works, how people change, and what constitutes the good life. The most insidious story is that the poor should become just like materially prosperous Americans. Living as we do in the “age of anxiety,” where a growing economy is accompanied by shrinking happiness, this story is starting to smell fishy. 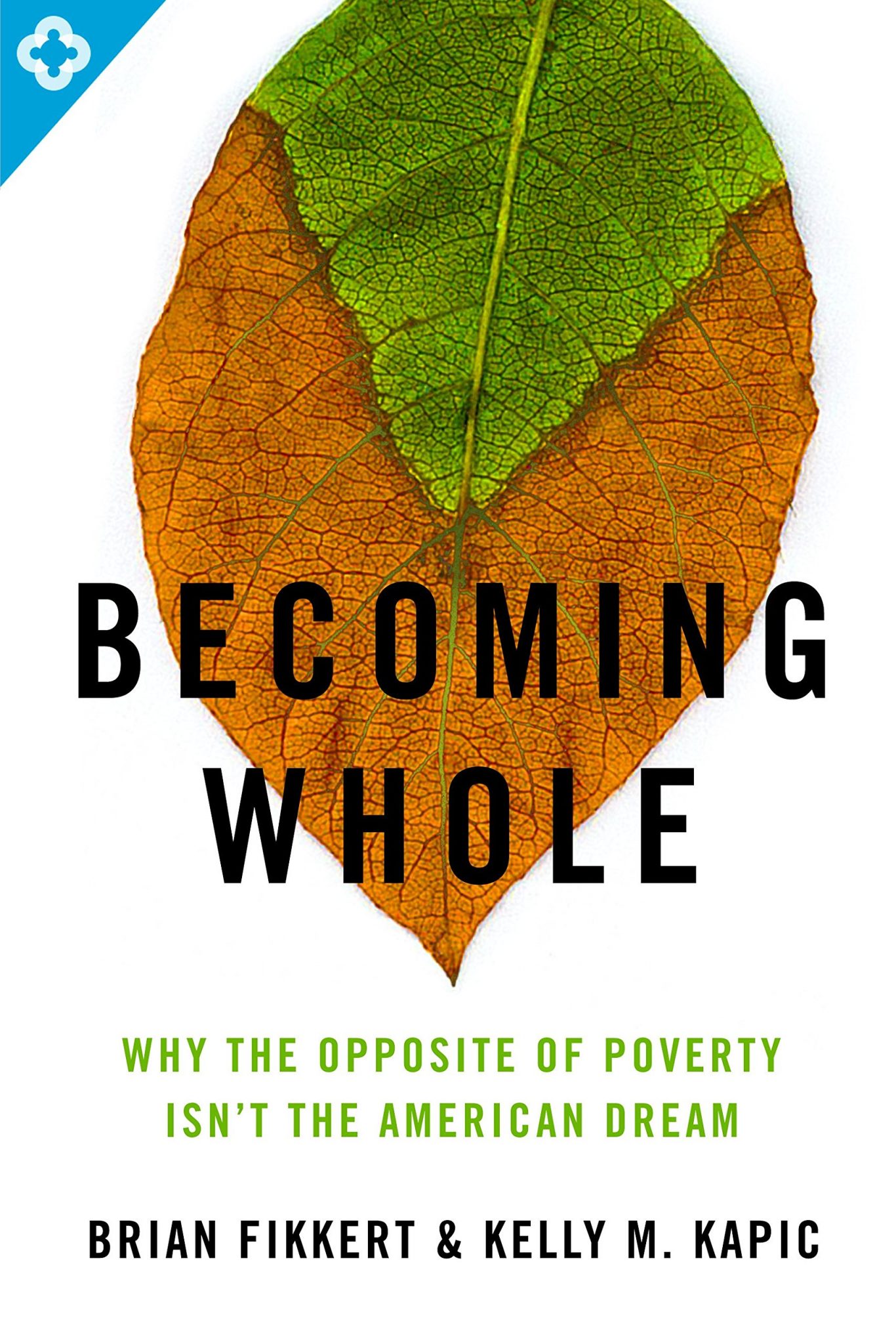 Becoming Whole: Why the Opposite of Poverty Isn’t the American Dream

Becoming Whole: Why the Opposite of Poverty Isn’t the American Dream

In Becoming Whole (building on the best-selling When Helping Hurts), Brian Fikkert and Kelly M. Kapic look at the true sources of brokenness and poverty and uncover the surprising pathways to human flourishing, for poor and non-poor alike. Exposing the misconceptions of both Western Civilization and the Western church about the nature of God, human beings, and the world, they redefine success and offer new ways of achieving that success. Through biblical insights, scientific research, and practical experience, they show you how the good news of the kingdom of God reshapes our lives and our poverty alleviation ministries, moving everybody involved towards wholeness.

All poverty alleviation assumes a story about how the world works, how people change, and what constitutes the good life.

Two ideas have helped create the myth that material prosperity equals wealth. One is the story of Western naturalism, which reduces the “mind-affections-will-body-relational creature” to a mere physical being who has no soul and doesn’t need relationships to thrive. Having thus reduced humanity, it then reduces “helping the poor” to material handouts and economic empowerment so that they too can become “consuming robots.”

The other false story flows out of bad Christianity. “Evangelical Gnosticism” teaches that the soul is superior to the body. It also reduces the soul to the mind, rather than mind-affections-will that are fully integrated with each other and the body.

The love child of Evangelical Gnosticism and Western naturalism is a peculiarly American gospel: your soul can go to heaven, and your body can be happy in the meantime through material consumption. In this gospel, poverty alleviation often means dispensing material resources and evangelism together, but it doesn’t develop whole people. With this false gospel convincingly skewered, Fikkert and Kapic go on to tell “God’s story of change” that redeems every dimension of our humanity.

The genius of Becoming Whole lies in its non-reductionist anthropology. Over and over, we’re reminded that people are a union of mind, affections, will, and body, and are made for relationship with God, self, others and creation. Putting this together yields a holistic understanding of human flourishing.

This shines in the chapters on creation but also on the fall. Such anthropology is a strength of the Reformed tradition from which the authors write. The doctrine of total depravity has too often been cartooned into utter depravity (sometimes by its neophyte preachers!), but it was originally a sophisticated understanding of human nature that helps us see the severity of the fall and the enormity of salvation. If humans are a complex mix of mind, affections, will, body, and relationships, then the fall has touched every dimension. And the gospel redeems every dimension!

Holistic redemption shines on every page of Becoming Whole. For some readers, the book will serve as their baptism into the totality of salvation that includes far more than going to heaven when you die. For others, the grandeur of the new creation will inspire them to see fresh implications of the gospel—especially in how we think about the poor.

Where’s the Rest of the Story?

However, the book did leave me with one nagging question: Where’s the rest of the story? A brief glance at the chapter titles is revealing. Their story ends with “The New Creation Dawns.” But what about the new creation completed? Where is the second coming of Christ? The judgment that will finally put the world to right? The resurrection of the dead that will allow us to enjoy the totality of our mind-affections-will-body-relationships? “He is coming again to judge the living and the dead” gets a line in the Apostles’ Creed, but it doesn’t get a chapter in this book.

To be fair, these do get mentioned. “No, she is not yet completely whole because the kingdom is not yet fully consummated,” we’re reminded in one woman’s story of transformation (222). “Our world and our lives are still very messy and complicated. We wait for the final destruction of indwelling sin with which we still wrestle, for Satan to be completely bound, for the resurrection of our bodies,” we are reminded again (231). But these are just qualifications, meant to assuage the reader’s cognitive dissonance. (The authors even call them “caveats.”)

Evangelicals should recover the supernatural kingdom that the social gospel denied and fundamentalism forgot, then apply that kingdom to all the world’s problems.

Every book can’t say everything, and I appreciate that the authors want to emphasize how new creation changes the “now,” since “now” is where our poverty alleviation work is done. But I also wish they’d developed a vision for how the “not yet” changes how we work in the “now.” This strikes me as critical in a book that aims to correct the false narratives of Western culture. Another myth of our culture is that we can create a perfect world with the right technical fixes. In this scheme, even the gospel can be seen as a technology that simply needs to be “applied” correctly and, voila!

People who hope in technical fixes wind up either overconfident or cynical. When Helping Hurts burst the bubble of overconfidence. It showed that many of our best efforts don’t produce the intended results. In the preface to Becoming Whole, Fikkert worries that some have become paralyzed by cynicism in the wake of When Helping Hurts, and he wants to set them free. The kingdom’s “not yet” means that we are called to faithful effort (“now”) but not to perfection. It also gives hope—a dimension of the spiritual and supernatural life that the authors so often champion—to all of us, including the poor. As such, eschatology frees us from both perfection and also cynicism. It’s far more than a caveat!

This aside doesn’t take any shine off what Fikkert and Kapic have achieved. I started this review with Henry’s Uneasy Conscience because I see their work as a faithful fulfillment of his vision. “Evangelicalism can view the future with a sober optimism, grounded not only in the assurance of the ultimate triumph of righteousness, but also in the conviction that divine righteousness can be a potent factor in any age,” Henry wrote. It’s the “in any age”—the “now” of the kingdom—that he wanted us to develop.

I see When Helping Hurts and Becoming Whole as some of the best scholarship that takes up this mantle—theological, readable, written from a supernatural worldview, and helpful to the church.

Hunter Beaumont is lead pastor of Fellowship Denver Church and serves on the board of Denver Institute for Faith and Work and Acts 29 U.S. West.