Once upon a time I worked as a youth pastor in my local church. As I surveyed the collective wisdom shaping youth ministry, I began to worry that we were teaching kids modernist apologetics in a postmodernist context: prooftexting faith through superficial arguments that fell short with outsiders. Some of our kids—too many of them—found their faith shattered in college by an overconfident graduate student or an atheist professor. These intellectual challenges fueled an already popular narrative that the “secular academy” was hostile to Christian faith. But what if the problem was more about us than the places we sent our kids? What if faith is more about formation than testing?

Lesslie Newbigin’s little book Proper Confidence (which shortens and simplifies his earlier book The Gospel in a Pluralist Society) hints at these possibilities and suggests what we might do about them. Drawing from the philosopher of science Michael Polanyi, Newbigin distinguishes confidence from post-Cartesian understandings of certainty. Evangelical culture too often conflates these terms in unhelpful and unhealthy ways. Faith depends on confidence, not certainty. “You have believed because you have seen me,” Jesus says to Thomas after the resurrection. But “blessed are those who have not seen and yet have believed” (John 20:29).

Distinguishing certainty from confidence foregrounds the connection between faith and doubt. “I believe,” cries the man with the demon-possessed son when he encounters Jesus. But the next bit matters, too: “Help my unbelief!” (Matt. 9:24). Faith, as Newbigin observes, is ultimately “the courage to confidently affirm beliefs which can be doubted.” 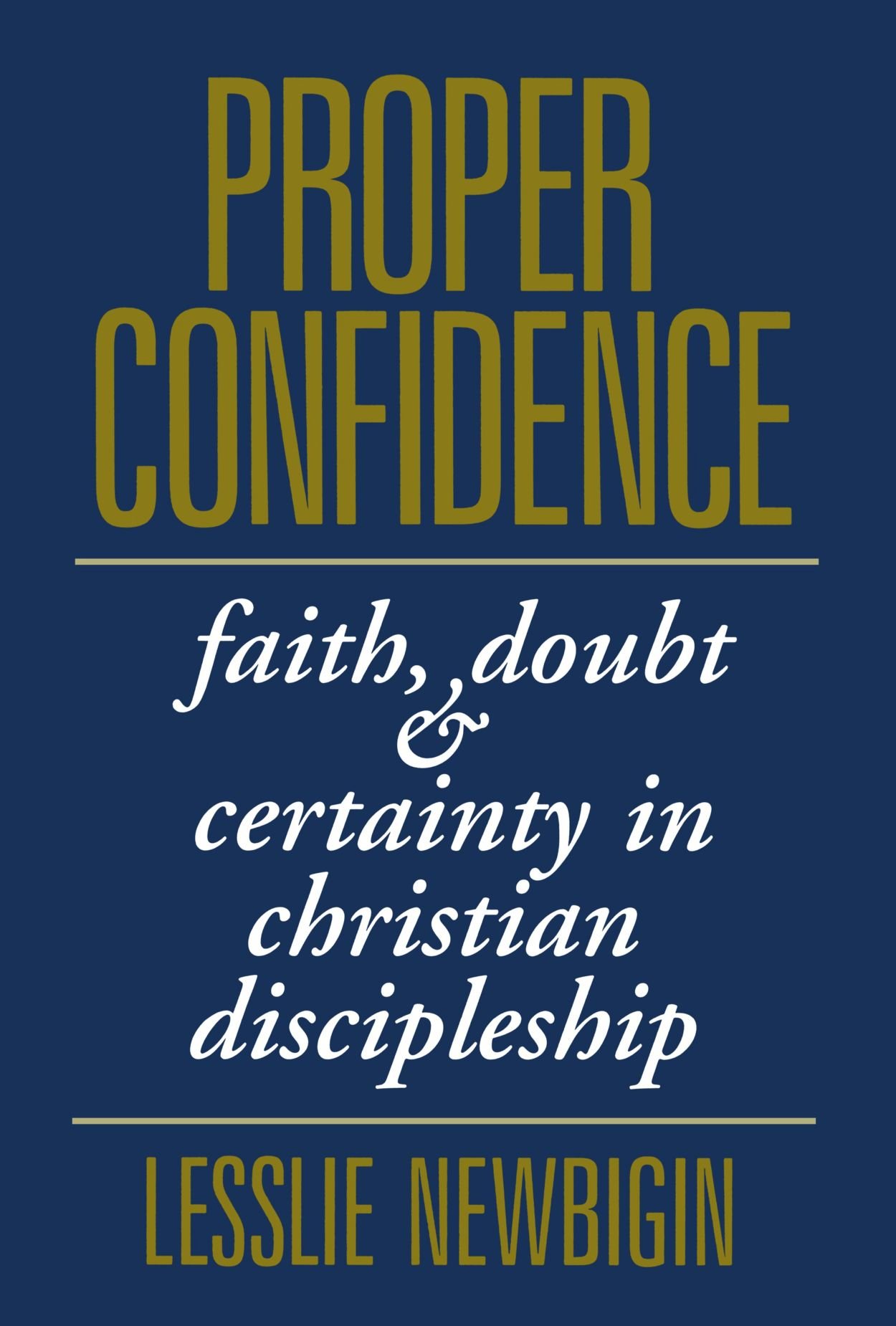 Looking to end the divisive conflict that has raged between Christians who attack each other either as “liberals” or as “fundamentalists,” Lesslie Newbigin here gives a historical account of the roots of this conflict in order to begin laying the foundation for a middle ground that will benefit the Christian faith as a whole. What results is a perspective that allows Christians to confidently affirm the gospel as public truth in our pluralistic world.

Committing to Faith in the Face of Doubt

Because faith admits the possibility of doubt, it requires an ongoing personal commitment: “We are continually required to act on beliefs that are not demonstrably certain and to commit our lives to propositions that can be doubted.” Newbigin notes that faith isn’t limited to our beliefs: Our relationships with others also require a kind of “personal knowledge” that is “impossible without risk.” These relationships “cannot begin without an act of trust, and trust can be betrayed.”

We commit and recommit our lives and our relationships amid faith and doubt. More than the propositions we utter, these commitments bear witness to the gospel. And Newbigin recognizes that everything is on the line: “there are no insurance policies.” As the apostle Paul asserted, “If only for this life we have hope in Christ, we are of all people most to be pitied” (1 Cor. 15:19).

The distinguishing mark of Christian faith isn’t the absence of doubt but the object of trust.

Of course, we aren’t alone in risking everything: “So long as we continue to live we continually act on the assumption that certain things are true and others not.” The question, then, isn’t whether we wager but where we place our bet. The distinguishing mark of Christian faith isn’t the absence of doubt but the object of trust. Our confidence comes “not in the competence of our own knowing, but in the faithfulness and reliability of the one who is known.” And this is precisely why Paul insists the risk is worth it: “Christ has indeed been raised from the dead.” Our youth ministries would be better off modeling Paul’s confidence in Jesus than masking doubt with untenable appeals to certainty.

Newbigin captures this contrast in the final paragraph of Proper Confidence:

Newbigin knew this claim ran headfirst into one of the major theological divides of our day: the tension between an open-ended liberalism and a close-minded fundamentalism. These labels are used “not so much to identify oneself as to label the enemy.” One becomes a proxy for an absence of any confidence in commitments, the other synonymous with unfounded certainty. Newbigin sought to recover a more charitable gloss: “Liberalism at its best is marked by an open mind which is humble and ready to learn. Fundamentalism at its best is marked by a moral courage which holds fast to the truth even when it is assailed by counterclaims from without.”

Lesslie Newbigin played both pastor and educator to me through his little book, and it changed my life.

Such arguments sometimes cast Newbigin into a theological wilderness: too conservative for theological liberals and too liberal for theological conservatives. But his conviction and clarity strike the right balance: Our “understanding of the truth must be constantly open to revision and correction, but only and always within the irreversible commitment to Jesus Christ.” Christian faith is rooted not in the absence of doubt but in an abundance of hope.

Newbigin also emphasizes that confident faith isn’t at odds with reason. To the contrary, one of the most unreasonable claims we can make is that our certainty eliminates the possibility of doubt. Yet, too often this kind of claim unwittingly—and sometimes deliberately—anchors the catechesis of our kids.

The tenuous link between faith and certainty was the context in which I first encountered Proper Confidence as a law student in the late-1990s. Raised in evangelical youth culture, I was confronting difficult texts of philosophical theology as part of a seminar on law and theology. Newbigin helped situate much of what I read. More importantly, he helped situate my own faith within that landscape, simultaneously strengthening the hope that I have in Jesus and chastening my prideful intellect. Newbigin played both pastor and educator to me through his little book, and it changed my life. If you don’t believe me, ask the groomsmen in my wedding six years later. It’s customary for the groom to give a small gift like a pocketknife or a wallet to the men who stand with him. My friends got copies of Proper Confidence.

Christian faith is rooted not in the absence of doubt but in an abundance of hope.

Newbigin has remained an important influence on my thinking. My most recent book, Confident Pluralism, sets out the civic and legal practices necessary for finding common ground across deep differences. The arguments in that book aren’t distinctly Christian—they are grounded in history, theory, and law. But they’re entirely compatible with Christian existence in a pluralistic society, and Newbigin helps explain why.

Proper confidence gives Christians the resources for confident pluralism, steering clear of the twin pitfalls of unwarranted certainty and functional relativism. This kind of confidence is better practiced than simply preached: Our witness to the truth of the gospel is “something that must be continually renewed, reknown, and reenacted throughout life.” And that is why for Christians, proper confidence and confident pluralism aren’t certain ends but faithful commitments, made in the hope of the resurrection.