Writing a review of journalist Oliver Burkeman’s book-length caution against instrumentalizing everything may not be the best sign that I have taken his words to heart. But Four Thousand Weeks: Time Management for Mortals is more than a cautionary tale; it is also an insightful takedown of conventional wisdom and a profound call to live in the now. And for Christians, it’s a powerful reminder of why hope anchors faith.

Burkeman’s title refers to the average number of weeks in a human life, and he wants his readers to make the most of this relatively short time. He wryly critiques popular lore, like Stephen Covey’s famous example of the struggle to fit the big rocks, the pebbles, and the sand into a jar (72). Covey solves the problem by starting with the big rocks—the metaphor for our most important priorities. The pebbles and sand only fit in the jar if they come after the big rocks. But as Burkeman notes, Covey has rigged the thought experiment by assuming we have enough room in our jars for all the big rocks. And we don’t.

Our fundamental problem is not that we’ve wrongly ordered our priorities; it’s that our lives are not big enough to hold everything of importance. The solution is not prioritizing the big rocks; it’s saying “no” to some of them. The upended moral tale is a powerful illustration of our finitude. 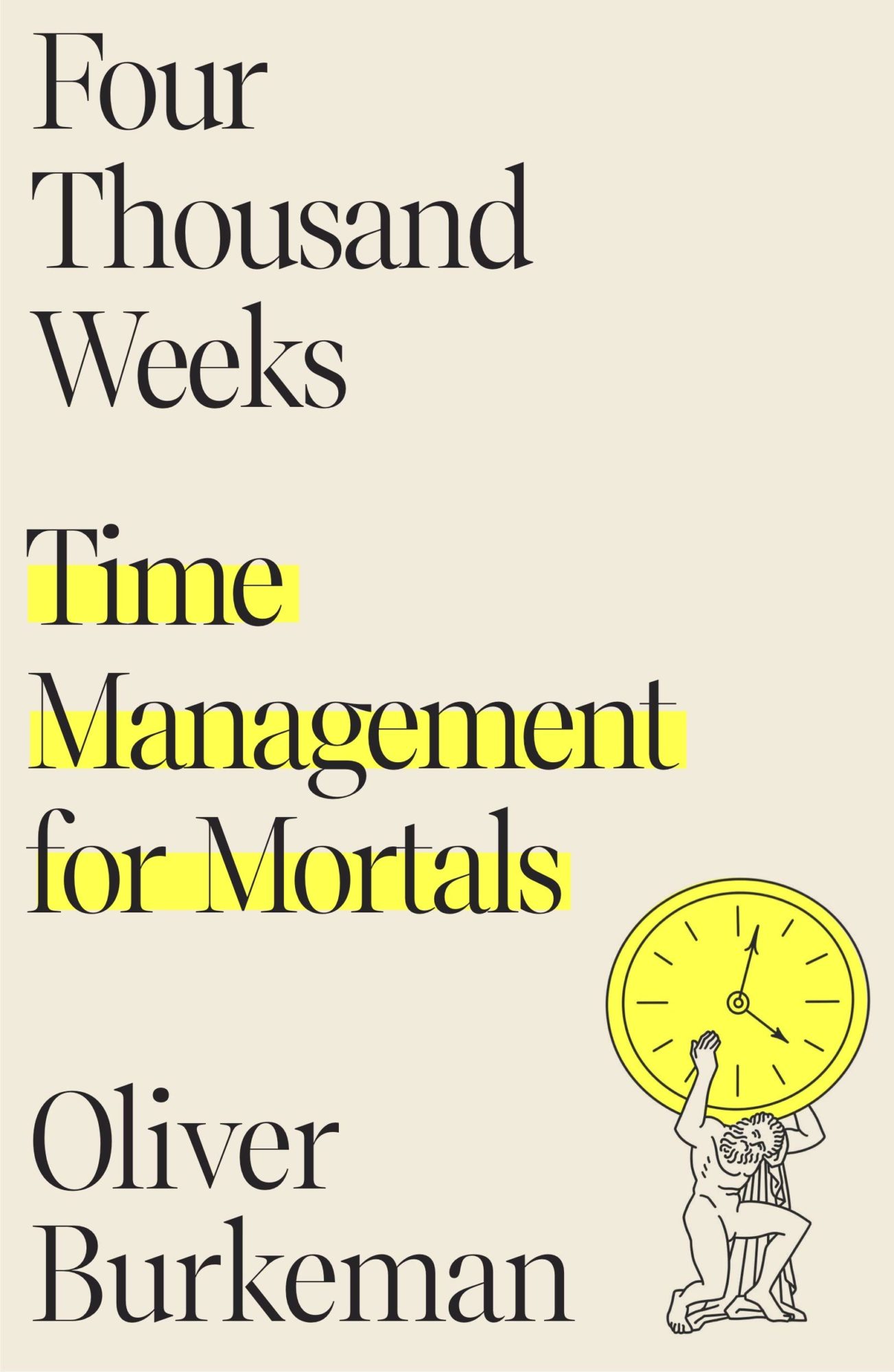 The average human lifespan is absurdly, insultingly brief. Assuming you live to be 80, you have just over 4,000 weeks. Nobody needs telling there isn’t enough time. We’re obsessed with our lengthening to-do lists, our overfilled inboxes, work-life balance, and the ceaseless battle against distraction; and we’re deluged with advice on becoming more productive and efficient, and “life hacks” to optimize our days. But such techniques often end up making things worse. The sense of anxious hurry grows more intense, and still the most meaningful parts of life seem to lie just beyond the horizon. Still, we rarely make the connection between our daily struggles with time and the ultimate time management problem: the challenge of how best to use our 4,000 weeks.

You Have to Settle

Burkeman picks up this theme of finitude in a later section, “The Inevitability of Settling.” Conventional wisdom tells us not to “settle” for the wrong career, spouse, friends, or home. But as Burkeman notes, all of life is settling: “You will settle—and this fact ought to please you” (84). He elaborates:

[Y]ou can’t become an ultrasuccessful lawyer or artist or politician without first “settling” on law, or art, or politics, and therefore deciding to forgo the potential rewards of other careers. If you flit between them all, you’ll succeed in none of them. Likewise, there’s no possibility of a romantic relationship being truly fulfilling unless you’re willing, at least for a while, to settle for that specific relationship, with all of its imperfections—which means spurning the seductive lure of an infinite number of superior imaginary alternatives. (85)

In other words, life is a series of constraining choices, and the clearer the constraints, the more freedom we will discover within those constraints. The observation cuts against current social norms, but centuries of Christian theology show how marriage, family, community, and vocational commitments open possibilities for trust, depth, and flourishing even as they foreclose other alternatives.

Life is a series of constraining choices, and the clearer the constraints, the more freedom we will discover within those constraints.

And yet Burkeman is not writing for Christians; to the contrary, he assumes his audience has moved beyond such beliefs: “When people stop believing in an afterlife, everything depends on making the most of this life” (45). To his credit, Burkeman honestly confronts the implications of his premise. If hope requires “plac[ing] your faith in something outside yourself, and outside the current moment—to make things all right in the end,” then hope is a “curse” (230). And Four Thousand Weeks is, in the end, “an extended argument for the empowering potential of giving up hope” (231). All of this is foreshadowed in Burkeman’s subtitle: “Time Management for Mortals.” Indeed, if you accept the book’s premise that we are mere mortals—that there is no God and no transcendent hope—then Burkeman’s advice is not only insightful but nearly irrefutable. If I weren’t a Christian, Four Thousand Weeks might well be my bible.

But I am a Christian. I believe that the life, death, and resurrection of Jesus Christ changes everything, not only for my 4,000 weeks but also for the entire created order. While not denying my earthly mortality, my starting point is closer to C. S. Lewis’s observation in The Weight of Glory that “there are no ordinary people”—people in the fullness of time are either “immortal horrors or everlasting splendors.”

Lewis cautions that the end to which we are headed “does not mean that we are to be perpetually solemn.” In fact, “we must play.” In this way, Lewis’s framing dovetails with much of Burkeman’s practical advice: we should be fully present in each moment, we should invest in the people around us, and we will find greater joy resting together than resting alone.

But purpose changes perspective. Christians are not only living in the here and now; we are eagerly awaiting a better life to come. That means hopeful endurance in the suffering that inevitably awaits all of us in this life. In the face of this reality, Christians can proclaim that “though outwardly we are wasting away, yet inwardly we are being renewed day by day. For our light and momentary troubles are achieving for us an eternal glory that far outweighs them all” (2 Cor. 4:16–17).

Christians who recognize these claims should not see ourselves as merely the mortals in Burkeman’s subtitle. To be sure, we know that this earthly life is fleeting: “for you are dust and to dust you will return” (Gen. 3:19). But we locate our earthy finitude in transcendent hope.

But purpose changes perspective. Christians are not only living in the here and now; we are eagerly awaiting a better life to come.

Recognizing the eternal framing of our earthly lives also means setting aside a day each week for worship and rest. For Christians, the starting point for the time we manage is not 4,000 weeks, but 3,429 weeks (one-seventh fewer weeks of our “own time” if we take seriously the Third Commandment).

Burkeman quotes approvingly Walter Brueggemann’s understanding that Sabbath means spending a day each week “in the awareness and practice of the claim that we are situated on the receiving end of the gifts of God.” For Burkeman, one “need not be a religious believer to feel some of the deep relief in that idea of being ‘on the receiving end’—in the possibility that today, at least, there might be nothing more you need to do in order to justify your existence” (153). But I don’t think that’s what Brueggemann is saying at all; the gift implies a Giver, and that is why Sabbath brings both rest and a reminder of one’s finitude.

Burkeman also recognizes a deeper truth: “Nobody ever really gets four thousand weeks in which to live—not only because you might end up with fewer than that, but because in reality you never even get a single week, in the sense of being able to guarantee that it will arrive, or that you’ll be in a position to use it precisely as you wish” (118). This counsel is not that different from Jesus’s instruction not to worry about tomorrow, “for tomorrow will worry about itself” and “each day has enough trouble of its own” (Matt. 6:34).

But here again, purpose and perspective matter; Jesus precedes these words with another admonition: “seek first his kingdom and his righteousness, and all these things will be given to you as well” (Matt. 6:33).

What Gives Meaning to Our Time?

I hope Christians read Four Thousand Weeks—it’s full of smart insights and practical wisdom for avoiding common pitfalls. But it’s also a reminder of what’s at stake. If Jesus didn’t rise from the dead, then whatever else we do with our time, we are squandering much of it—not only in Sabbath rest but also in our prayers, our ministries, and that portion of our livelihood that we tithe to the church. We are destined to be among the biggest failures of Burkeman’s instruction manual. Pity us among all people, as the apostle Paul suggests (1 Cor. 15:19).

But if Jesus did rise from the dead, then all our time matters. Burkeman is right that “when it comes to how you’re using your finite time, the universe absolutely could not care less” (208). But with the hope of the resurrection, Christians can be assured that even if the universe does not care, the God who created us does. And we can live our 4,000 weeks, or however many we are given, knowing that the management of our time is only part of the story.