I’m not an overly emotional person, outside of watching Duke basketball and seeing my kids grow up too quickly. But I confess to predictable tears this past spring with each new episode of John Krasinski’s Some Good News. As we began a long season of pandemic shutdowns and stay-at-home orders, Krasinski brought us both ordinary folks and also some of his famous friends demonstrating extraordinary kindness and creativity. More than anything else, Some Good News showcased the “we” that is possible even amid social distancing, relational isolation, and, for some, immense suffering and loss.

When it comes to our national political community, this collective “we” is under pressure. And Jonathan Sacks underscores the significance of what’s at stake in his new book, Morality: Restoring the Common Good in Divided Times.

Sacks, former chief rabbi of the United Kingdom, brings a rare blend of scholarly training, practical experience, and a gift for clear writing. Like his previous books, Morality offers not only pointed critiques but also plausible steps forward. Having spent substantial time in both the United States and the United Kingdom, Sacks focuses his argument on both societies. (Since my only trip across the pond was an all-too-brief weekend in London, I’ll stick to the American context.) 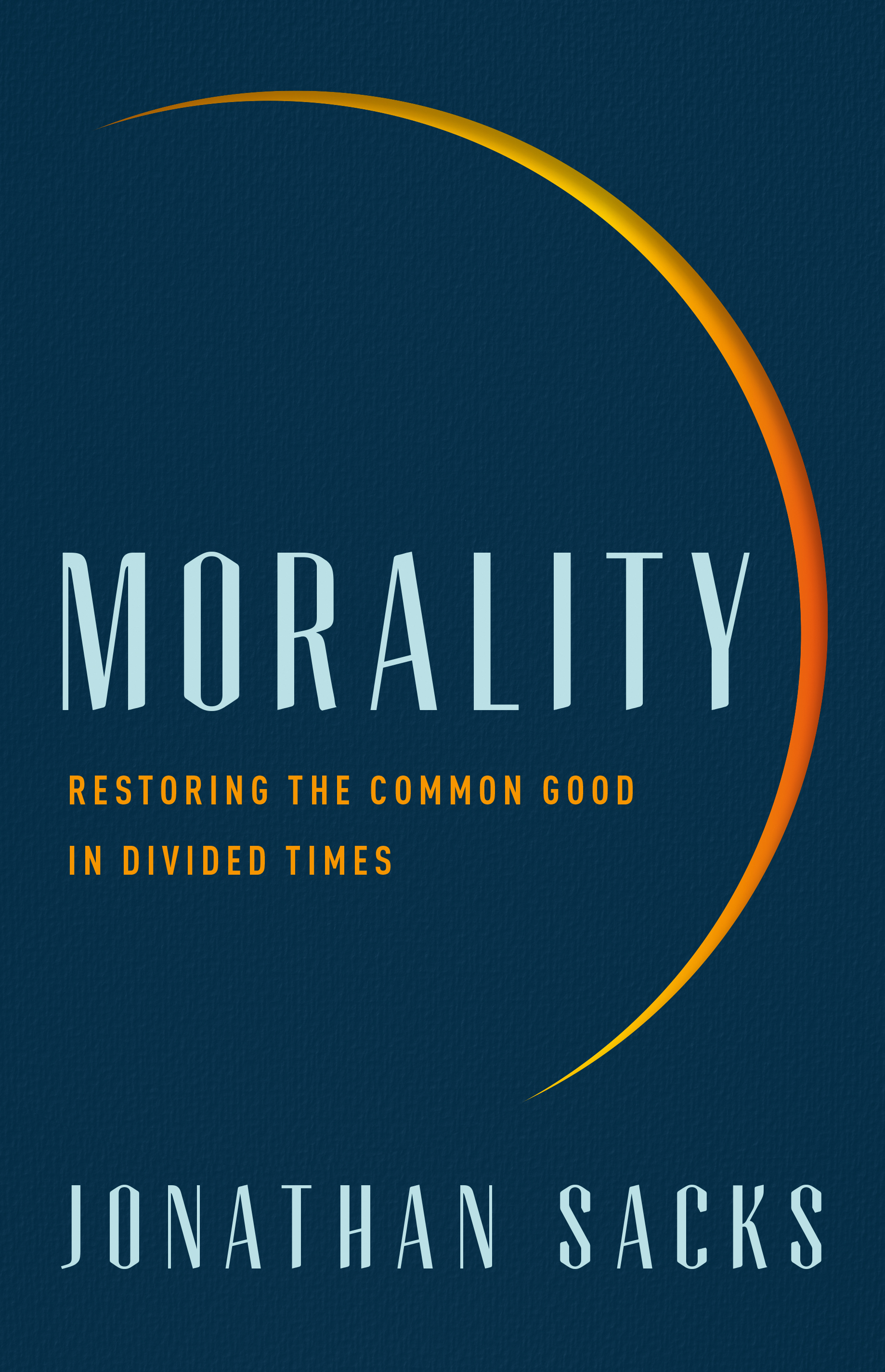 With liberal democracy embattled, public discourse grown toxic, family life breaking down, and drug abuse and depression on the rise, many fear what the future holds. In Morality, respected faith leader and public intellectual Jonathan Sacks traces today’s crisis to our loss of a strong, shared moral code and our elevation of self-interest over the common good. We have outsourced morality to the market and the state, but neither is capable of showing us how to live. Sacks leads readers from ancient Greece to the Enlightenment to the present day to show that there is no liberty without morality and no freedom without responsibility, arguing that we all must play our part in rebuilding a common moral foundation.

A major work of moral philosophy, Morality is an inspiring vision of a world in which we can all find our place and face the future without fear.

Sacks warns of the growing sense in our politics “that the other side is less than fully human, that its supporters are not part of the same moral community as us, that somehow their sensibilities are alien and threatening, as if they were not the opposition within a political arena, but the enemy, full stop.” Morality catalogs a long list of ideologically cross-cutting issues that contribute to this state of affairs, including loneliness, social media, the collapse of families, unconstrained markets, identity politics, and public shaming. But the one that most stood out to me was the risk of losing a shared sense of reality. Sacks suggests this risk is particularly acute with information mediated through social media. It is exacerbated by the absence of reliable gatekeepers or validators in the online world. As Sacks observes, “The internet has not yet developed a reliable ethic of truth.”

Having just watched the somewhat terrifying documentary The Social Dilemma, I’m not optimistic about our odds of developing a shared ethic of truth in online interactions. But if we want a shot, we’ll need to start with some basic agreement about our grounds for disagreement.

Consider the difference between what we might call “contestable” facts and “mostly indisputable” facts. Contestable facts are at least somewhat unobservable or unverifiable. Christians affirm the truth of many contestable facts that are essential to how we live and act in the world, including claims about the nature of God, the purpose of humanity, and the means through which God has reconciled us to himself.

Just because these facts are contestable doesn’t mean they’re not true. “Jesus rose from the dead” is a claim about the truth of the world, not just my personal opinion. But it’s a contestable fact that likely won’t be proven to everyone in ordinary human time. When it comes to contestable facts, we ought to be generous with those who disagree with us and recognize the limits of our ability to persuade. In so doing, we can acknowledge that we are called to speak the truth of the gospel, but that God convicts and convinces others of that truth.

In contrast to contestable facts, indisputable facts are generally observable and accessible. Not all indisputable facts need be observed firsthand: we rely on others to translate knowledge and observations about science, history, and other matters (though the more theoretical the science or the more ancient the history, the more contestable the facts may become). But indisputable facts generally leave little room for disagreement or interpretation. I wrote this review over the weekend, which means I didn’t write it on Tuesday. If you insisted I wrote it on Tuesday, you would be wrong. And all of us should be able to agree you would be wrong.

Our national political discourse increasingly fractures not only over contestable facts but also over indisputable ones: whether Wayfair or a Washington pizzeria are engaged in human trafficking (they are not); whether Michael Brown said “Hands up, don’t shoot” in Ferguson, Missouri (he did not); whether a missile hit the Pentagon on September 11, 2001 (it did not); whether President Trump lies (he does).

We should commit to generous dialogue with others over contestable facts, while insisting on the importance of accurately conveying indisputable ones.

Still, many indisputable facts remain, well, indisputable. And too often those who misstate or deny them—including Christians—refuse to admit error. Whether due to stubbornness or sin, such doubling down over indisputable facts distorts reality and erodes trust. Consider, by contrast, Anthony Fauci’s approach. Reflecting on his earlier advice that downplayed the importance of masks, Fauci said, “When you find out you’re wrong, it’s a manifestation of your honesty to say ‘Hey, I was wrong.’” In fact, such willingness to admit error and push toward the importance of keeping indisputable facts beyond dispute is one of the ways we heed Sacks’s advice to move toward “a togetherness that [has] been weakened by too much pursuit of self.”

Christians averse to self-focused individualistic currents in our society can realize that insisting on one’s own version of facts—or, for that matter, one’s own view of political or social realities—is itself a self-focused individualistic posture. We’re instead called to “put off falsehood and speak truthfully,” recognizing that “we are all members of one body” (Eph. 4:25).

Sacks ends Morality by asking how we might restore a shared political community. His answer is to start with ourselves: “We don’t have to wait for the world to change for our lives to change.”

When it comes to our part in pursuing a reliable ethic of truth, we could begin by committing to generous dialogue with others over contestable facts, while at the same time insisting on the importance of accurately conveying indisputable ones. And when we get indisputable facts wrong (as sometimes happens with hasty words or insufficient research), we can show humility and care by admitting fault and by showing grace to others who admit their own mistakes.

Who knows? Such modest commitments might be the first steps toward recovering a shared sense of “we.”