When an author writes a book on Christianity and politics, both “Christianity” and “politics” are often framed as abstractions. Much in the same way Christians discuss “cultural engagement,” the idea of “religion” and “politics” becomes an endless quest to unlock the grand mystery. And on this topic, there is no shortage of books.

One of the most important questions—and I’d say most urgent—that gets overlooked in the process of faith and politics is that of agency: How does a Christian come to understand himself or herself as political? What orients the Christian when making political decisions?

For Jonathan Leeman—prolific author and editorial director of 9Marks—the task of politics is far more about “we” than “I.” In his new book, How the Nations Rage: Rethinking Faith and Politics in a Divided Age [interview | 20 quotes], it is Christian congregations together confessing that Jesus is a righteous King who has commissioned us to announce his kingship. In the local church, the Christian conscience is formed to learn the righteous requirements of justice in a divided age. The congregation, then, becomes the animating political center of a Christian’s existence. 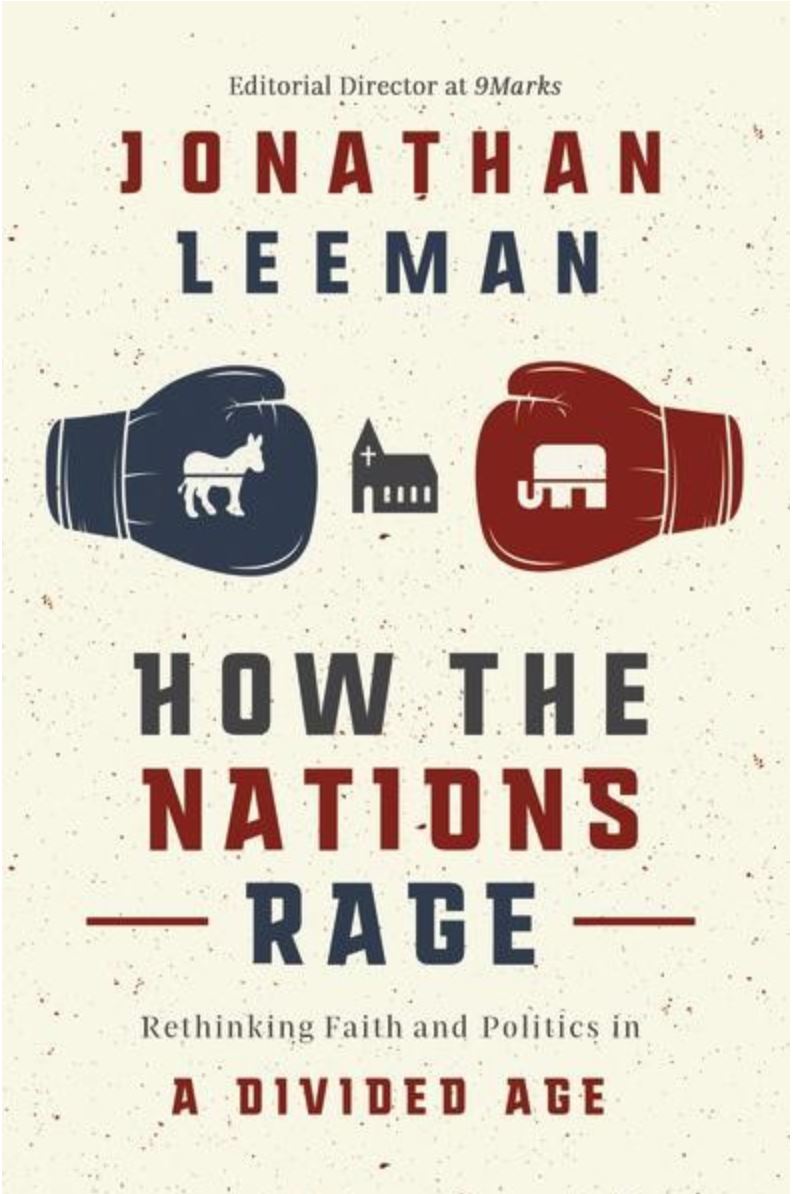 We live in a time of division. It shows up not just between political parties and ethnic groups and churches but also inside of them. As Christians, we’ve felt pushed to the outskirts of national public life, yet even then we are divided about how to respond.

In How the Nations Rage, political theology scholar and pastor Jonathan Leeman challenges Christians from across the spectrum to hit the restart button. Only when we realize that the life of our churches now is the hope of the nation for tomorrow do we become the salt and light Jesus calls us to be.

The table of contents reveals how Leeman intends to reorient and even subvert the normal categories for Christian political witness. For example, the Bible isn’t a book of case law, but a constitution. The “public square” isn’t neutral, but a battleground of gods. Government isn’t a savior, but a platform for justice. Churches aren’t lobbying organizations, but embassies of heaven. Christians aren’t cultural warriors, but ambassadors.

This is the best popularly written book I have ever read on how to understand the relationship of Christianity to the political order. It offers a paradigm shift.

Many aspects of Leeman’s book are worth addressing, but I want to touch on a few of his unique contributions.

First, Leeman grounds the task of politics and justice in the reconstituted world of the Noahic covenant. Referencing the requirement of a “reckoning” in Genesis 9:5–6, he observes that “God authorizes human beings to use force against one another in the face of injustice.” This leads to a threefold purpose for politics in a fallen society:

(1) to render judgment for the sake of justice;

(2) to build platforms of peace, order, and flourishing;

(3) to set the stage for redemption.

On this last point, Leeman argues one reason God has authorized political order is to create stability so that the church can advance the gospel.

This emphasis on the Noahic covenant informs Leeman’s doctrine of religious liberty. He offers an Old Testament vantage point that Christians miss when they champion the First Amendment more than the Bible. The reconstitution of society in a post-flood world shows that God is concerned about justice in human affairs, and that he hasn’t established society to police religious belief. Therefore, insofar as a person isn’t acting unjustly to the point of harm, they should be free to worship as they please. As Leeman writes, “The state and its citizens must tolerate the worship of those gods whom one does not acknowledge, at least until those gods do harm to oneself or one’s neighbor.”

Second, Leeman rightfully names reigning ideologies for what they are—religions. Religion isn’t simply about piety or divine revelation. Religion is whatever a person absolutizes and worships; whether “god” is explicit in the equation is irrelevant. Money, power, identity, ideology—each is a god. So politics is really a battleground where the gods of society rage against one another. It isn’t “neutral.”

Though the gods might find common consensus on some points, a Christian view of the political order understands that the nations rage because they’re torn asunder by competing ideas of what in society should be supreme.

“Claiming to separate politics and religion,” Leeman observes, “keeps organized religion outside the city gates while hiding idols and unnamed gods inside this very claim.” He thus helps unmask the religious orientation behind, well, everything. People smuggle in all sorts of orthodoxies; our society just calls only a few of them “religious.”

Third, Leeman calls Christians to a politics of prudence and wisdom. The task of the political order is to establish a framework for righteous preservation in a fallen society. This means not all “political” issues are treated with equal force. Issues like abortion and racism (straight-line issues) have biblical clarity behind them; the need for a balanced budget (jagged-line issue) doesn’t. According to Leeman, “The Bible cares more about whether a government pursues justice by the wisdom of God than it cares about what form of government a nation possesses.”

Fourth, Leeman helps Christians understand that they’re living amid “two ages” whose institutionalized authorities often legitimately overlap and, in our fallen world, conflict. “All of life is both political and religious, because we are political and religious creatures,” he writes. “But church and state possess distinct, God-given authorities with distinct jurisdictions.”

The task of the state and the church, then, is to establish the demarcations and jurisdictions for each. The state doesn’t possess authority to render judgment on what is or isn’t orthodox Christian belief, because it wasn’t given that authority. At the same time, Christianity is inherently political, because the confession that Jesus is Lord produces Christians formed to live lives of justice and righteousness.

One of the perennial debates in public theology is how Christianity makes truth claims in a pluralistic setting, and whether and to what degree common-ground truths are accessible in a fallen world.

Though it wasn’t a central fixture of How the Nations Rage, Leeman’s fourfold typology for how Christians should conduct themselves in a pluralistic world—where they hope to honor Christian teaching while also persuading non-Christians—was really clarifying.

Referencing Martin Luther at the Diet of Worms, Leeman explains that one approach is to appeal to conscience, since protecting individuals from coercion is common sense. Pointing to Martin Luther King Jr., he argues Christians can appeal to natural law, like King did in his Letter from Birmingham Jail. The third approach tries to make truth claims using statistics. All three models, Leeman argues, attempt to be broadly accessible. They’re appropriate insofar as a principled pragmatic approach is appropriate, or even necessary. But they’re problematic because they ground the power of each appeal in the consent of the fallen person.

How the Nations Rage offers an accessible, local-church-driven analysis of the difficult task of political witness in a secular age.

The fourth option Leeman dubs the Polycarp approach: call down thunder from heaven in a “thus saith the Lord” manner. This approach is valid at all points, but especially when Christians must appeal to the lordship of Christ for authority on a matter. In a striking line, Leeman writes, “When Christians invoke the name of God or Christ in public argument, we communicate that not only is Jesus our King and Lord, but he is theirs, even if they deny it.”

I also found helpful Leeman’s observation that Scripture is like a constitution in that it “provides the rules for making the rules.” It isn’t a roadmap to solve every question about which form of government is indisputably best. Instead, the Bible is preeminently concerned with government establishing order based on the justice of Genesis 9. This can take form in many models, as we see demonstrated in Israel’s own history.

I have two small disagreements with the book. First, Leeman invests much authority in the Noahic covenant, and I think he is right to do so, but his exegesis of the text was too thinly presented in proportion to the level of weight he gives it. I understand he might’ve been limited by space and readership, but I think more attention to exegetical analysis is warranted.

Second, though Leeman does focus on the question of “rights” in the final chapter, I think he missed an opportunity to explain and more adequately ground “rights” biblically. Whether humans have “rights” (in the way we construe them in a liberal democracy) is a question that plagues biblical interpreters. For the record, I think we do, as “rights” are obligations humans are owed by virtue of being image-bearers. I wish Leeman would’ve spent more time on this section, since I think it would’ve highlighted the unique contribution Christianity has made to the subject compared to secularism’s remarkably thin doctrine of human rights.

How the Nations Rage offers an accessible, local-church-driven analysis of the difficult task of political witness in a secular age. It’s the best popularly written book I have ever read on how to understand the relationship of Christianity to the political order. It offers a paradigm shift for how Christian conceive of themselves as political.

This call to be, though never less than a call to human flourishing and justice, is primarily a call to see these realities anchored in the most politically revolutionary declaration of all time: Jesus is Lord.