The Scottish theologian John Baillie (1886–1960) once observed that “the great shadow on the conscience of the modern West is the shadow of the cross.” By this, he meant to point out that the reality of Christ’s life, death, and resurrection throws into doubt the independence and autonomy of modernity. Something greater than modern thought ever dreamed of overshadows its existence, calls it to account, and convicts it of unrighteousness. If we understand modernity to be marked by man’s attempt to free himself from the constraints of the divine, it must be judged a failure, and an inevitable one at that.

For Larry Siedentop—emeritus fellow at Keble College in Oxford—the cross of Christ is the foundation (though not the conviction) of the conscience in the modern West. Modernity is best understood not as a futile project to dethrone God, but as a complex of beliefs, institutions, and norms that uphold the dignity and worth of the individual created in God’s image. Siedentop’s Inventing the Individual: The Origins of Western Liberalism (2014) surveys historical periods from ancient Greece to the late Middle Ages in Europe before concluding with a call to better appreciate the religious—and specifically Christian—background of the modern, secular, liberal order.

Paul and the Papal Revolution

There is no shortage of accounts for the rise of modernity. Siedentop’s argument builds on the work of others—particularly medievalist Brian Tierney and legal historian Harold Berman—to argue that the key shift from the ancient to modern social order arose in the context of struggles between kings and popes. Siedentop highlights the emergence of canon law, a coherent and comprehensive system of jurisprudence, as codifying this shift. In attempting to loose peasants and serfs from the bonds of local and civil authorities, the papacy inaugurated a force for revolution and change that would ultimately position the individual as the locus of meaning, sovereignty, and significance.

To be sure, the typical figures that arise in accounts like this make an appearance. The 14th-century philosopher and theologian William of Ockham is credited with systematizing “nominalism,” an outlook that emphasizes the priority of human subjectivity and perception over objective realities. Nominalism thus extends and grounds the transition from societies that assume objective, natural inequalities and obedience to those founded on assumptions of equality and subjective rights. The origins of Western liberalism, Siedentop writes, go back to Christianity and particularly to the apostle Paul. Paul’s teaching on the individual’s worth is developed through history until realized in the Papal Revolution of the Middle Ages.

Siedentop’s narrative is a whirlwind tour, taking us from the household shrine in the families of ancient Greece, to the monasteries of Benedict of Nursia, to the courts of Christian emperors and popes. But the consistent thread is the displacement—often gradual, sometimes sudden—of ancient pagan communalism with modern Christian individualism. Therefore, Siedentop writes, “The conception of society as founded on ‘natural inequality’ was giving way to a conception of society as founded on ‘moral equality,’ as an association of individuals rather than an association of families.”

This juxtaposition of “individuals” with “families” (and with other collective institutions—whether cities, states, or churches) illustrates the central dynamic of Siedentop’s narrative. While it may be the case that Christianity—particularly as it appears in the apostolic age and in the person of Paul—provides a new framework for understanding the significance of the individual soul, Siedentop often tells only half the story. Perhaps this is a matter of emphasis, in that Siedentop is trying to draw out of his historical interpretation what’s salient or characteristic.

The difficulty of this approach—endemic to all such grand historical narratives—is that it often oversimplifies the factors or figures under discussion. When Siedentop discusses Paul, for instance, the reader gets the impression that the apostle’s contribution was to give the individual a “foothold in reality.” Later Siedentop writes, “It is hardly too much to say that Paul invented Christianity as a religion.” He describes Paul as an apostle of individual salvation since his thought “provided an ontological foundation for ‘the individual’ through the promise that humans have access to the deepest reality as individuals rather than merely as members of a group.” This isn’t to say Paul didn’t appreciate community. In fact, the “individual freedom” Paul championed “did not mean that Paul dissolved traditional social bonds without replacing them.” It just means the individual’s conscience and will were foregrounded, with all social relationships redefined in light of that priority. 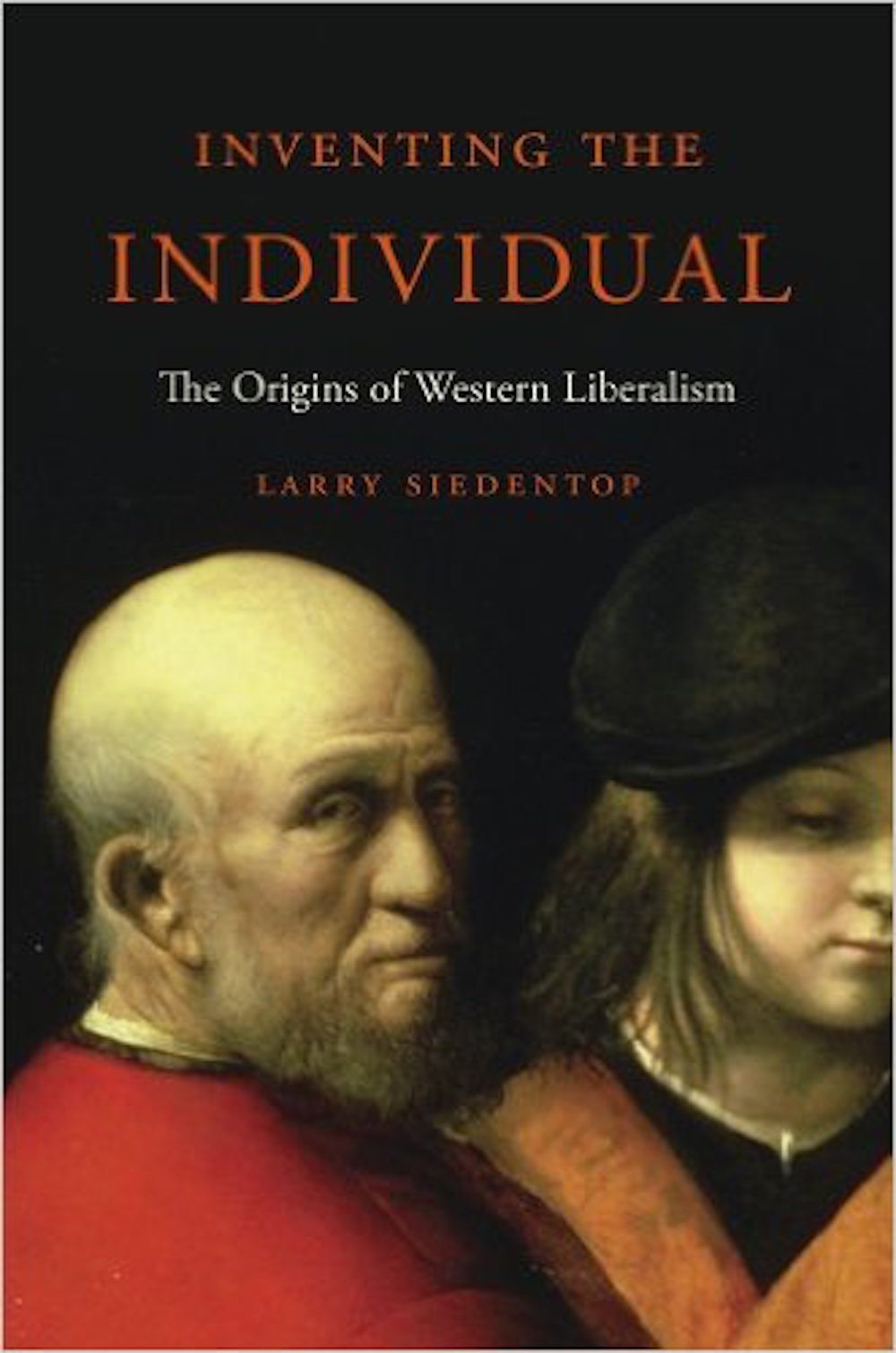 Inventing the Individual: The Origins of Western Liberalism

Inventing the Individual: The Origins of Western Liberalism

For Siedentop, then, the church is, like all of these new social realities, grounded in “a new basis for human association, a voluntary basis—joining humans through loving wills guided by an equal belief.” Of course, a more robust understanding of Paul’s account of salvation and society, comprehending both individual as well as communal aspects of existence, might emphasize the covenantal and organic nature of such realities. Siedentop is more apt to read into Paul a nascent contractualism. To be sure, the individual has significance in Paul’s thought. But such significance is only part of the larger picture—a picture Inventing the Individual sketches but doesn’t fill in.

Beginning and End of Liberty and Justice

Such shortcomings are replicated throughout Siedentop’s narrative. The story he tells is true, but at some points only half-true. The half-truth is still valuable, though, if for no other reason than that it runs so counter to much contemporary self-understanding. Siedentop’s interpretation helpfully casts doubt on the dominant narrative of secularism’s emergence from the oppressive claims of God and religion.

There’s a kind of liberalism grounded in the history, institutions, and ideas of the Christian West, and Siedentop provides us with a worthy entry into that legacy. If we understand this liberalism and individualism to be authentic—the real thing—then we are helped in identifying its counterfeits, which regrettably have become the prevailing models.

Siedentop also helps us see how true liberalism needs the church since it arises out of Christianity. The renewal of society, therefore, is really bound to renewal of the church—its beliefs, teachings, practices, and obedience. The church can also benefit from liberalism, but its hopes aren’t tied to the fate of Western civilization. The church is bigger, older, and more significant than the modern West.

True liberalism needs the church since it arises out of Christianity. The renewal of society therefore is really bound to renewal of the church—its beliefs, teachings, practices, and obedience.

Yet the church does have a stake in modernity, and would be mistaken to think it can avoid the troubles that will come with liberalism’s collapse. The liberal order owes a great deal to Christianity, and perhaps Christians owe something to liberalism, too. The prospect of a new illiberal order ought to be enough to convince us of that debt. After all, the architects of such an order aren’t going to be Christian magistrates and emperors, but materialist magicians, as C. S. Lewis warned, and relativist dictators, as Benedict XVI has also cautioned.

The German theologian Dietrich Bonhoeffer—himself confronted with a form of modernity that had morphed into diabolical illiberalism—observed how authentic goods like liberty, justice, and reason had, like the prodigal son, returned home after a fruitless secular sojourn. “Reason, justice, culture, humanity, and other concepts like these sought and found new meaning and new strength in their origin,” Bonhoeffer wrote. “This origin is Jesus Christ.”

An understanding of Christian liberalism can help us recognize the deep coherence between Christ and his church, with justice, liberty, and truth rightly understood. This is how Siedentop’s story yields important resources for our own self-understanding and the significance of modernity.

As he concludes, “If we in the West do not understand the moral depth of our own tradition, how can we hope to shape the conversation of mankind?” Even if the church’s hope isn’t ultimately bound to the West’s fate, the West’s fate will be determined by whether or not it bends its knee under the shadow of the cross that falls across its conscience.