Globalization as a modern phenomenon has upset traditional structures of power and paved the way for change on a massive scale. The pace of this dynamic transition, comparable in scale with only a few other epochs in history, is unprecedented. Consider, for instance, the explosive growth in wealth on a global level over the 150 years. This growth is remarkably captured in what’s sometimes been called “the most important economic chart in Western civilization.”

The economist Deirdre McCloskey puts the chart, which indicates per capita economic growth, in the context of simultaneous increases in population and what that combination truly signifies: “Never had such a thing happened. Count it in your head: eight and half times more actual food and clothing and housing and education and travel and books for the average human being—even though there were six times more of them.” As McCloskey concludes, “The combination of longer and richer lives is historically unique. It is one reason that liberalism has spread. There are by now many more adults living long enough lives sufficiently free from desperation to have some political interests.”

Moisés Naím’s The End of Power: From Boardrooms to Battlefields and Churches to States, Why Being in Charge Isn’t What It Used to Be is a contemporary chronicle of some of the key consequences of this historically unique phenomenon of more—and richer—people the world over. McCloskey describes the “triple revolutions” of the past two centuries in politics, population, and prosperity—phenomena he parses through the lenses of the “More, Mobility, and Mentality Revolutions.” The More Revolution is the increase in material prosperity combined with the population growth McCloskey describes. Naím reaches a similar conclusion, and this is an important takeaway with implications for the rest of his analysis: “When people are more numerous and living fuller lives, they become more difficult to regiment and control” (emphasis his). As we shall see from Naím’s conclusions, for those concerned with controlling others, the structures of control end up having to be much more totalizing and comprehensive.

The Mobility Revolution follows closely on that conclusion, as people now have enhanced means to shift allegiances and identities, choose between brand loyalties, and move within and between sovereign nations. The Mentality Revolution is the change in attitudes, preferences, and expectations that lags shortly behind the other revolutions. Human beings are highly adaptable, and the privileges of today quickly become the rights and entitlements of tomorrow. Naím, senior associate in the International Economics Program at the Carnegie Endowment for International Peace, traces the implications of the More, Mobility, and Mentality Revolutions across a wide swath of contemporary contexts, from political, economic, social, technological, and religious. At times the survey can be a bit breathless and jarring, and readers can be left with the sense they’re getting an impressionistic, and certainly not comprehensive, survey of current trends. There’s an unavoidable element of selectivity in Naím’s presentation given the constraints of space and genre. This isn’t a highly academic book, even though it’s aimed at an intellectually serious readership.

Naím is largely right that we are, other contrary indications notwithstanding, entering a new age marked in large part by the “decay of power,” as he puts it. Today we have a “picture of power scattered among an increasing number of newer, smaller players from diverse and unexpected origins” (9). But the most debatable aspect of Naím’s work is the most novel as well. His recognition of the revolutions previously described isn’t particularly unique, even if the presentation is up-to-date and persuasive. Rather, Naím’s purpose is to argue that concurrent with the diffusion of power is a decline of power’s efficacy itself. As he puts it, “The powerful today are more constrained than in the past, their hold on power is far less secure than that of their predecessors, and their tenures are shorter” (218). Perhaps. 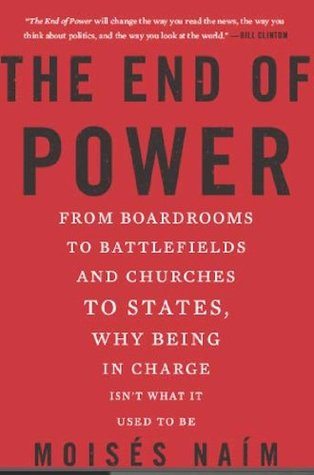 The End of Power: From Boardrooms to Battlefields and Churches to States, Why Being in Charge Isn’t What It Used to Be

The End of Power: From Boardrooms to Battlefields and Churches to States, Why Being in Charge Isn’t What It Used to Be

The end of power as Naím describes it, the closing of an era of unprecedented centralized and hierarchical power, is really the end (or goal) of liberalism—the purpose of the liberal political and economic revolutions that have diffused power and prosperity more broadly than ever before. On Naím’s analysis, this is a mixed good, and the end of power has, for instance, neutralized political parties. Political impotence is a large concern for Naím, as his positive advice about what to do in the face of power’s decay focuses largely on political solutions. “We need to restore trust in government and in our political leaders,” he worries (239). To do so we must strengthen political parties, increase political involvement, and welcome political innovations (239–244). In this recommendation Naím joins a number of other commentators, including the Zambian economist Dambisa Moyo, who see the lack of political power as a significant threat to social stability. As Naím puts it, to avoid the threat of anarchy “we need something that is very difficult: an increased disposition in democratic societies to give more power to those who govern us” (237).

There’s an alternative diagnosis and prescription concerning the state of power in the world today, however. Naím admits his suggestions are counterintuitive, especially based on the perception that in many areas power has become more, not less, concentrated. Consider, briefly, the number and scale of multinational corporations, NGOs, and the share of GDP spending accounted for by national governments, particularly in the West. For one concrete example, the banks deemed “too big to fail” before the Great Recession are now bigger than ever. The alternative explanation is that Naím has only identified half the story. He’s traced the diffusion of power downward, so to speak, but not the simultaneous concentration of power upward.

How these can both be true simultaneously has been the subject of the writing of advocates of decentrism for the last century and more, including the likes of Dutch theologian and politician Abraham Kuyper. Rather than simply decaying and diffusing, power has actually been increasingly evacuated from the middle, flowing instead to the top and the bottom. We have increasingly empowered and autonomous individuals at the same time that we have increasingly centralized, large, and influential structures of economic and political power.

Power has really decayed most significantly in the institutions Edmund Burke called “little platoons,” the mediating structures of civil society Tocqueville identified as so important and characteristic of American life. The sociologist Robert Nisbet highlighted this trend in his classic The Twilight of Authority. Perhaps the greatest modern advocate of a civil societarian decentrism was the German economist Wilhelm Röpke, who convincingly demonstrated the coherence and interdependence of the autonomous individual with the communitarian collective, a process he called “enmassment.”

“Mass man is individualistic because of the loosening of the social fabric and the disintegration of community,” Röpke argued. “One of the least well understood aspects of the process of enmassment is that it detaches the individual from his natural social fabric and leaves him to his own resources.” The resources available today may be more imposing and impressive than ever before in human history, but they leave one no less isolated.

Amid this isolation churches in particular have a key role to play. They provide the spiritual resources necessary to counterbalance the centrifugal forces of collectivism as well as the centripetal forces of individualism. In corporate worship the gospel proclaims, to each of us: “You are not your own” (1 Cor. 6:19). We belong rather to Jesus Christ and are part of his body, the body of believers. In the church we have a properly balanced perspective on the significance of the individual created in God’s image who nonetheless doesn’t exist in isolation. We are, instead, persons directed toward God and one another. Churches have for some time seen the effects of cultural shifts arising out of individualism, but increasingly they will also face pressure from central authorities seeking to remove obstacles to enmassment.

In The End of Power, Naím has provided the tools for seeing the implications of the vast increase of material resources available to individuals over the last two centuries. But he hasn’t adequately accounted for the simultaneous shift of power upward in the modern world—into centralized collectives and the corresponding enervation of critically significant mediating institutions like the family and churches. Coming to grips with the scale of these shifts of power is a great moral challenge of the third millennium.