In 2008, Zach McLeod was a 16-year-old high school junior in Massachusetts and, by all accounts, a model evangelical Christian. The son of two parents who worked for Cru as Harvard campus ministers, Zach played worship music on his guitar, memorized Bible verses, worked with orphans in South Africa, and had a reputation for kindness and generosity. He was also a standout athlete, set to be the starting cornerback for his high-school football team.

But a routine play changed everything.

During the team’s first scrimmage of the season, Zach and four teammates tackled the opposing team’s running back. There was no obvious helmet-to-helmet collision, no dramatic violence. But as he got up from the tackle, Zach wobbled, and then, moments later, collapsed. He was flown to a nearby hospital where the diagnosis came in: an acute internal brain bleed. It would require three brain surgeries over the next few months for Zach’s situation to stabilize. Although his life was spared, Zach’s physical and cognitive abilities would never be the same.

Hit Hard: One Family’s Journey of Letting Go of What Was—and Learning to Live Well with What Is—written by Zach’s parents, Pat and Tammy, with the help of Cynthia Ruchti—is the story of Zach’s struggle to forge a new life after a traumatic brain injury. But even more, it’s the story of Pat’s and Tammy’s struggle to do the same: to deal with grief and loss, to care for their son and their three other children, to remain committed to each other and their faith, and—in one of the book’s most important contributions—to make sense of their complicated relationship with the game of football.

With Pat and Tammy alternating as narrators, Hit Hard traces the story from Zach’s injury in 2008 up to the present day. Readers get an inside look at Zach’s progress and setbacks as he works to recover and, in Pat’s words, “smudg[e] the lines between ability and disability.” Although Zach doesn’t fully recover, his enthusiasm for life, his love for others, and his resilience shine through the pages. 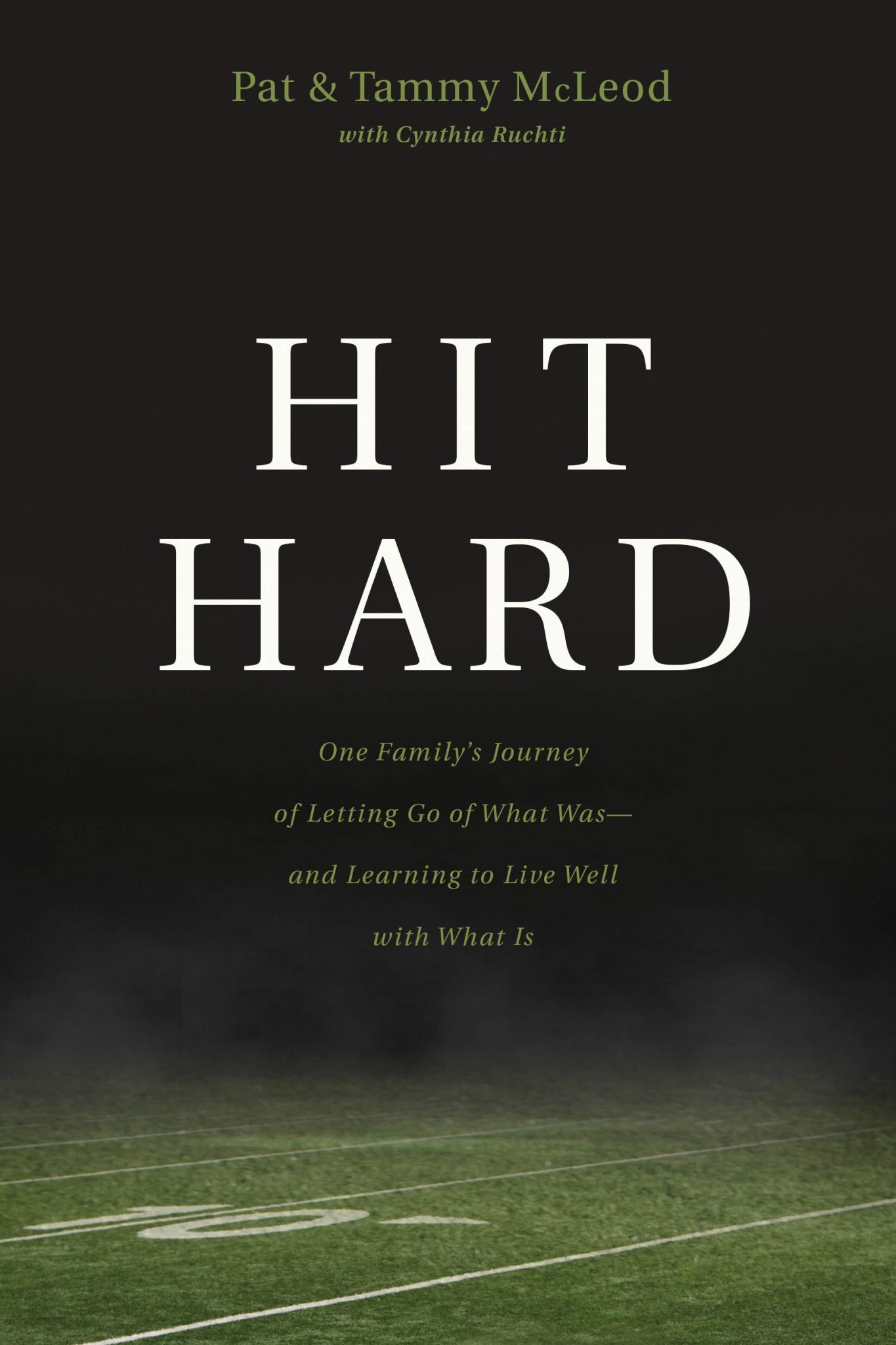 Hit Hard: One Family's Journey of Letting Go of What Was—and Learning to Live Well with What Is

Hit Hard: One Family's Journey of Letting Go of What Was—and Learning to Live Well with What Is

Life hit Pat and Tammy McLeod hard when their son Zach collapsed on a high-school football field; he had sustained a severe brain injury. Facing the devastating possibility that things would never be the same for their beloved son, they committed to staying strong as a family and finding a way to maintain their footing. But the journey would reshape their faith, their family, and their future in ways they never saw coming.

On its own, Zach’s story packs an inspirational and emotional punch. But there is a second source of drama that strengthens and deepens the book: the tension between Pat and Tammy as they deal in different ways with the grief and pain of their son’s injury.

Pat likes to focus on the positive, seeing himself and Zach “living in the middle of what could be the ultimate underdog comeback story.” But while Tammy shares some of those sentiments, she can’t escape the deep sense of loss. And she can’t escape the guilt of feeling such sadness while Zach is still with her.

“He was alive. Shouldn’t I be grateful?” Tammy writes. “I couldn’t understand Pat’s uncontainable optimism. And I was convinced he couldn’t begin to understand the depth of my sorrow.”

Football provides a source of tension, too. For Pat, a former college football player whose father coached the sport, Zach’s injury was a tragic but fluke event. For Tammy, on the other hand, the injury reflected a systemic problem built into the fabric of the game.

One of the most revealing scenes comes in chapter 11, when Tammy describes her frustration at Zach’s and Pat’s habit of watching football together on Sundays. Her anger boils over one Sunday as she sees the two cheering a hard hit. “How can you still enjoy watching that stupid game?” she snaps, before withdrawing to her study where she emails Pat stacks of articles on sports-related brain injuries. Undeterred, Pat continues to see football as a net-positive.

Coming Together in Faith amid Ambiguity

Despite their differences and struggles, Pat and Tammy continue to find solace in their faith. They write of viewing their situation in light of scriptural truths about God and themselves, and as part of the larger “creation, fall, redemption” story. But even as Pat and Tammy resolve to trust God, the tension between them lingers for most of the book, finally moving toward resolution in chapter 16. The breakthrough, Tammy tells us, came in 2014 when she finally felt that her grief—the pain of having her son and yet not having him in the same way as before—had a name: “ambiguous loss.” A term and idea developed by Pauline Boss, a therapist and professor emeritus at the University of Minnesota, the ambiguous-loss concept legitimized Tammy’s experience and gave her the freedom to openly admit something had indeed been lost. For Pat, too, the concept resonated, helping him better understand Tammy’s perspective and the depth of her grief.

Pat and Tammy are careful to point out that the ambiguous-loss concept didn’t solve anything on its own. At the same time, it’s clear that Boss’s writings helped to heal Pat’s and Tammy’s relational rift, in part by validating their divergent approaches. “It no longer seemed a curiosity that two faith-filled people could approach the same trauma with opposing perspectives,” Pat writes—an important lesson for those of us who are quick to push people toward Pat’s “let’s look at the bright side” approach and too hesitant to truly mourn with those who mourn.

Getting on the same page hasn’t meant agreement in all areas of life, of course, and football remains a source of friction. At the end of the book Pat is still highlighting the positive benefits of the game, emphasizing how it forged in him the very characteristics that “helped sustain me through our ambiguous loss,” while Tammy is pointing to the links between football and brain injuries (a section in the appendix suggests further reading on the subject). No definitive conclusions are reached. Ambiguity reigns. Yet that very ambiguity makes the book so valuable. By showing two committed Christians who come down on different sides of the football debate, the book provides an open space for conversation and thoughtful reflection about the benefits and risks of football participation.

If the book’s treatment of football serves as one of its strengths, it also reveals its limitations. Hit Hard is first and foremost a story—a captivating, heartbreaking, hopeful story. But the need to keep moving the story along might leave some readers looking for more theological depth and reflection. That isn’t to say that Pat and Tammy are shallow writers. Both have advanced degrees in theology and spiritual formation, and they sprinkle the book with meditations on Scripture and quotes from thoughtful Christian authors like Nicholas Wolterstorff, Jerry Sittser, and Henri Nouwen.

Even so, they rarely expound on the theology that underpins their perspectives. They nod and gesture; Pat, for example, writes that “the whole concept of ambiguous loss resonated with the creation, fall, and redemption theme of the larger story that had carried me through.” But he doesn’t stop to explain that resonance nor explore its depths. So it is when it comes to football. Tammy points to her experience of pain and loss and to studies about concussions and CTE; Pat counters with his own experience with the sport and its character- and community-building values. But neither pauses to frame the debate about football in theological terms.

A book can’t be all things to all people, and Hit Hard clearly succeeds at its aims: to reach a wide audience with a compelling story of resilience and of hope amid pain and sorrow. Plenty of books fit within that genre. But few provide the level of insight, nuance, and reflection as this one. For both football fans and critics, for people dealing with or trying to walk with others through ambiguous loss, or simply for those looking for a riveting read, Hit Hard hits the mark.