Writing as the last millennium sulked to a close, Jacques Barzun summarized his view of the previous 500 years with the memorable title he chose for his most massive work—From Dawn to Decadence. Barzun was one of the great humanist scholars of the 20th century, and as he surveyed the culture, he was not a happy man. While others noted simply the end of a century, Barzun saw the end of an entire culture. His expansive commentary on the age and its end was, as he saw it, “a sketch of a culture at its close.” In Barzun’s lament, one word indicted the age at its close: decadence.

Barzun’s analysis seemed to be an erudite extension of the declinist argument that was then associated with cultural pessimists of a rightist bent, but has more recently been adopted by the cultural left and amplified into outright dystopia. Suffice it to say that decadence is not an optimistic judgment.

Two decades later, here comes Ross Douthat with courage to raise the decadence argument for a new generation. In The Decadent Society: How We Became the Victims of Our Own Success, Douthat pulls few punches. A sense of resignation “haunts our present civilization,” he asserts, and the responsibility of thinking souls is to find a way between “optimistic pretense and hysteria.” 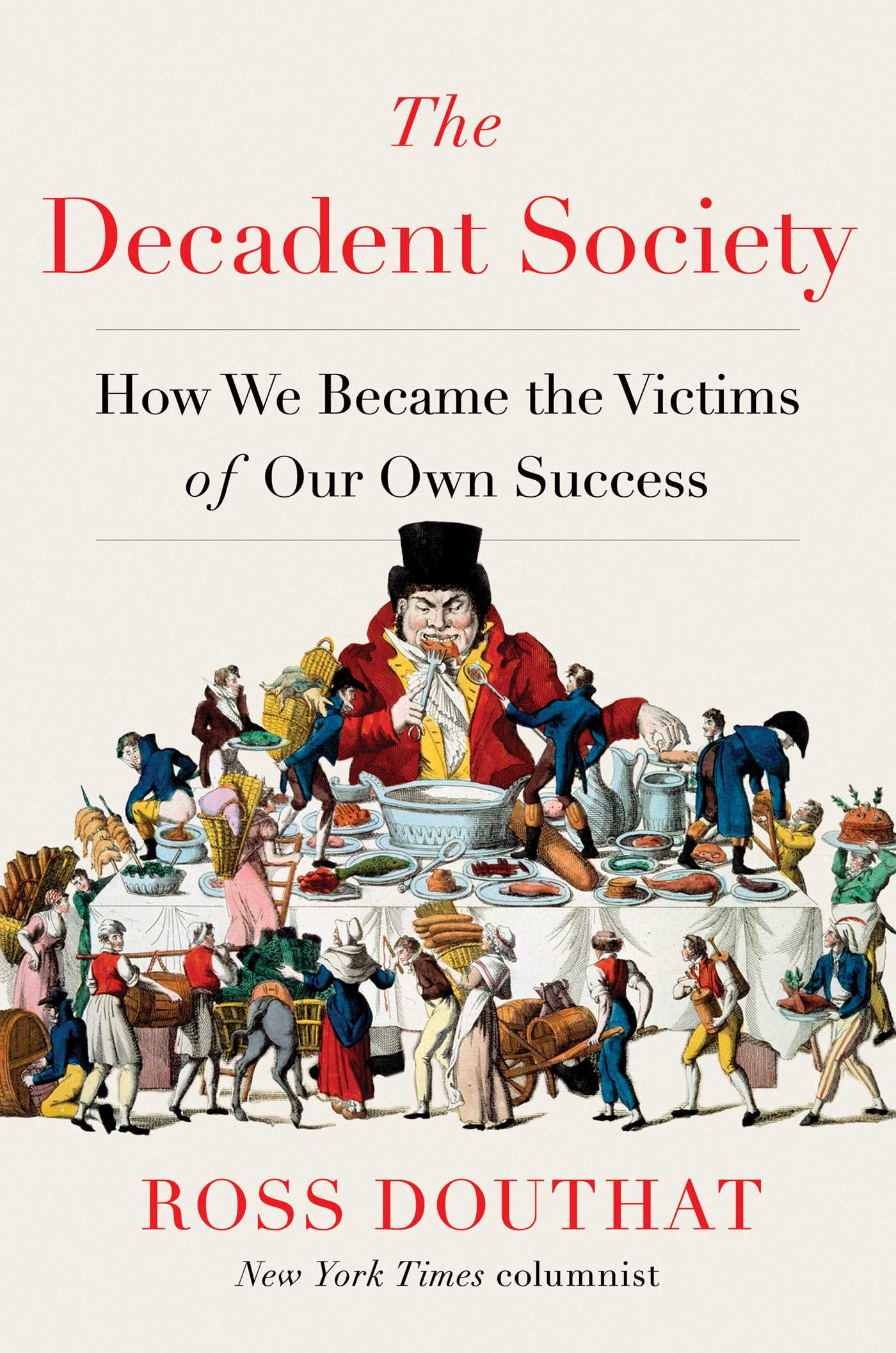 The Decadent Society: How We Became the Victims of Our Own Success

The Decadent Society: How We Became the Victims of Our Own Success

Today the Western world seems to be in crisis. But beneath our social media frenzy and reality television politics, the deeper reality is one of drift, repetition, and dead ends. The Decadent Society explains what happens when a rich and powerful society ceases advancing—how the combination of wealth and technological proficiency with economic stagnation, political stalemates, cultural exhaustion, and demographic decline creates a strange kind of “sustainable decadence,” a civilizational languor that could endure for longer than we think.

Ross Douthat is a conservative in the essential sense. Anyone familiar with his candor and courage as a columnist for the The New York Times knows that he sees much to conserve in the civilization of the West and in its Christian influence. His parents took him to evangelical churches when he was a child, but converted to Roman Catholicism before Douthat became a teenager. Douthat is Catholic himself, and he is also an incisive observer of both American culture and American religion—Protestant, Catholic, and therapeutic, in the main. Before The Decadent Society, his previous two books were Bad Religion: How We Became a Nation of Heretics (2012) and To Change the Church: Pope Francis and the Future of Catholicism (2018).

Is Douthat a cultural pessimist? Clearly, he doesn’t want to be. He is less condescending than Jacques Barzun, and he is not a right-wing crank. Neither is he a Puritan. He likes much of the culture he observes, and his service as movie reviewer for National Review reveals just how widely his tastes and interests range.

When Douthat looks at Hollywood and sees decadence, it is not so much that he sees fleshpots but that he laments repetition.

The most striking difference between Barzun and Douthat is the latter’s unembarrassed interest in popular culture. When Douthat looks at Hollywood and sees decadence, it is not so much that he sees fleshpots but that he laments repetition. As he surveys the landscape, “from the academic heights to popular bestsellers, from Christian theology to secular fashion, from political theory to pop music, a range of cultural forms and intellectual pursuits have been stuck for decades in a pattern of recurrence.”

This is a serious criticism, but it is not, at first glance, a warning of catastrophe. Indeed, Douthat employs decadence as a diagnosis of “economic stagnation, institutional decay, and cultural and intellectual exhaustion at a high level of material prosperity and technological development.”

As expected, Douthat lays out his case with skill and nuance. The age of economic expansion that began with the Industrial Revolution and ended sometime before the end of the 20th century is over. We should have seen it coming, Douthat writes: “At some point, every advanced-for-its-time society has ceased advancing; there is no reason to assume that the modern world is inherently immune from the torpor that claimed the Ottomans and imperial China in the not-so-distant past.”

The fact that human beings are making fewer babies is a far deeper problem, spiritually speaking, than the fact that Hollywood is stuck in a cycle of sequels.

But decadence also comes with sterility, and Douthat’s chapter on falling birthrates around the world is the most authentically dystopian part of his argument and analysis. This dystopia comes with two fundamental facts—there will be fewer babies, and there will be many more old people. The problem for society is that babies use up a lot of resources for a time, but then they become net producers for a much longer time. When it comes to the aged, the costs may well be even higher at the end of life, but without the promise of future contributions. An aging society is a society winding down, and this entropy is spreading nation by nation. It is a spiritual crisis.

The fact that human beings are making fewer babies is a far deeper problem, spiritually speaking, than the fact that Hollywood is stuck in a cycle of sequels.

Beyond stagnation (mostly economic) and sterility and repetition, Douthat also points to sclerosis (mostly political). His commentary is both perceptive and also sobering. He sees our “once-effective political order becoming impervious to constructive change.” That is a hard argument to refute, and Douthat wisely refuses to argue that it’s a truly recent development. This sclerosis was a long time in the making, and few significant political forces are even interested in reversing the process.

So, where are we headed? What scenarios for the future are conceivable?

The key to understanding Douthat’s central thesis is the knowledge that he does not see our civilization at the brink of disaster. The end may well be catastrophe, he allows, but the point is that the end of this civilization is likely rather distant. The likelier scenario, he believes, is that our culture just slowly winds down. It does not blow up; it just loses energy. Our politics, morality, institutions, economy, entertainments, and nurseries just dissipate. In his view, we are facing something of a slow melt—or at least a melt that started slowly.

Ross Douthat is a careful thinker and one of the most brilliant cultural observers of our time.

There is no way that any declininst narrative can escape the specter of Rome, and what Douthat sees most relevant about Rome’s decline and decadence is that the actual dissolution took so long—centuries in fact. Hauntingly he quotes poet W. H. Auden’s familiar description of Rome’s fall: “What fascinates and terrifies us about the Roman Empire is not that is finally went smash,” but that “it managed to last for four centuries without creativity, warmth, or hope.” That is the vision that haunts Douthat.

Readers of The Decadent Society will be haunted by the same vision, and simultaneously perplexed about what it means, both for the present and also for the future. Douthat concludes the book without either the “optimistic pretense” or “hysteria” of which he warns. He allows both for an intervention by divine providence or a more rapid collapse.

Douthat is a careful thinker and one of the most brilliant cultural observers of our time. Evangelicals should read The Decadent Society and revel in Douthat’s keen powers of observation and synthesis. He is precisely the kind of author who can open evangelical minds to new ways of understanding our cultural predicament.

The imperative of the gospel does not allow us to turn sacramentally inward. We have to remain, with even more intensity, directed evangelistically outward.

At the same time, Douthat’s Catholicism allows him a rather different view of the church’s cultural predicament than evangelical theology can allow. A sacramental and sacerdotal theology can ride the waves and wind-down of the culture with less urgency than a conversionist theology. Evangelicals will share Douthat’s lament over the prospect of “centuries without creativity, warmth, or hope,” but our instinctive response will be different.

The imperative of the gospel does not allow us to turn sacramentally inward. We have to remain, with even more intensity, directed evangelistically outward—and with, we remind ourselves, “creativity, warmth, and hope.”