In her Nobel Prize-winning book Secondhand Time: The Last of the Soviets, Svetlana Alexievich interviews scores of Russians who lament the loss of the Soviet Empire, even as they recount its horrors in excruciating detail. The Soviet Empire may have been barbaric, but at least they were great! The world feared them! They had defeated Hitler! (No thanks to the British and Americans.)

Several unapologetic Soviets complain they lost their beloved empire without a shot. Why didn’t blood flow in the streets in her defense? They blame Mikhail Gorbachev. As one Soviet observes, the Communist system could withstand any challenge from below. It could suppress any revolution. Except one. What if the party’s leader was no longer a true believer? What if Gorbachev betrayed the cause from within the Kremlin, from the very top, where no one could stop him?

Ross Douthat ponders an analogous takeover within the Vatican in his new book, To Change the Church: Pope Francis and the Future of Catholicism. What if Pope Francis isn’t Catholic? What if he aims to overturn centuries of dogma? What if he plans to stack the College of Cardinals with liberal allies who will ensure his revolution can’t soon be reversed? What if he banishes his conservative critics to the church’s periphery? Who, then, will enforce the teaching on sexuality and marriage preserved against Western cultural trends by the late Pope John Paul II and self-titled Pope Emeritus Benedict XVI? Indeed, how can the vicar of Christ so confidently dismiss the words of Christ on marriage and adultery from the Gospels?

The Catholic Church can’t change without undermining its claim to divine authority. As a result, Francis can’t come out and explicitly say he’s trying to change the church.

From his position as a New York Times columnist, Douthat has frequently criticized Pope Francis during the tumultuous last five years since Benedict XVI shocked the world and stepped down, the first pope to do so since the 15th century. Theologians and priests have often chided the layman Douthat for not leaving the debates of Francis’s tenure to the professionals, but this book reveals Douthat’s firm grasp of the political and theological issues.

Many Protestants will struggle to grasp the significance of the debate over communion for divorced and remarried Catholics. Douthat, though, uses history, theology, and Scripture to explain why the changes evidently endorsed by Francis would undermine the authority and credibility of the Catholic Church and betray its long-held understanding of Jesus’s teaching.

Discerning the Mind of the Pope

Last year’s celebration of the 500th anniversary of the Protestant Reformation highlighted many ongoing differences between the spiritual descendants of Luther and his unsympathetic judges at Trent. Even more than the sticking points over Mary, the authority of Scripture, and the nature of justification, the office of the pope prevents reconciliation between Catholics and Protestants. No matter the popularity of John Paul II, Protestants never seriously entertained proposals to submit to the pope’s authority. And the Catholic Church has grown more dependent on the unity embodied by the bishop in Rome, especially in this media-saturated age. When Benedict XVI stepped down, he didn’t just hand over Peter’s keys to heaven; he also gave Francis his Twitter password.

This institutional emphasis on unity has created a universal struggle to understand the mind and intent of Francis. The Catholic Church can’t change without undermining its claim to divine authority. As a result, Francis can’t come out and explicitly say he’s trying to change the church. We have to discern his motives through hirings and firings (the clearest signals), unofficial and unrecorded media interviews, and abstruse formal writings. 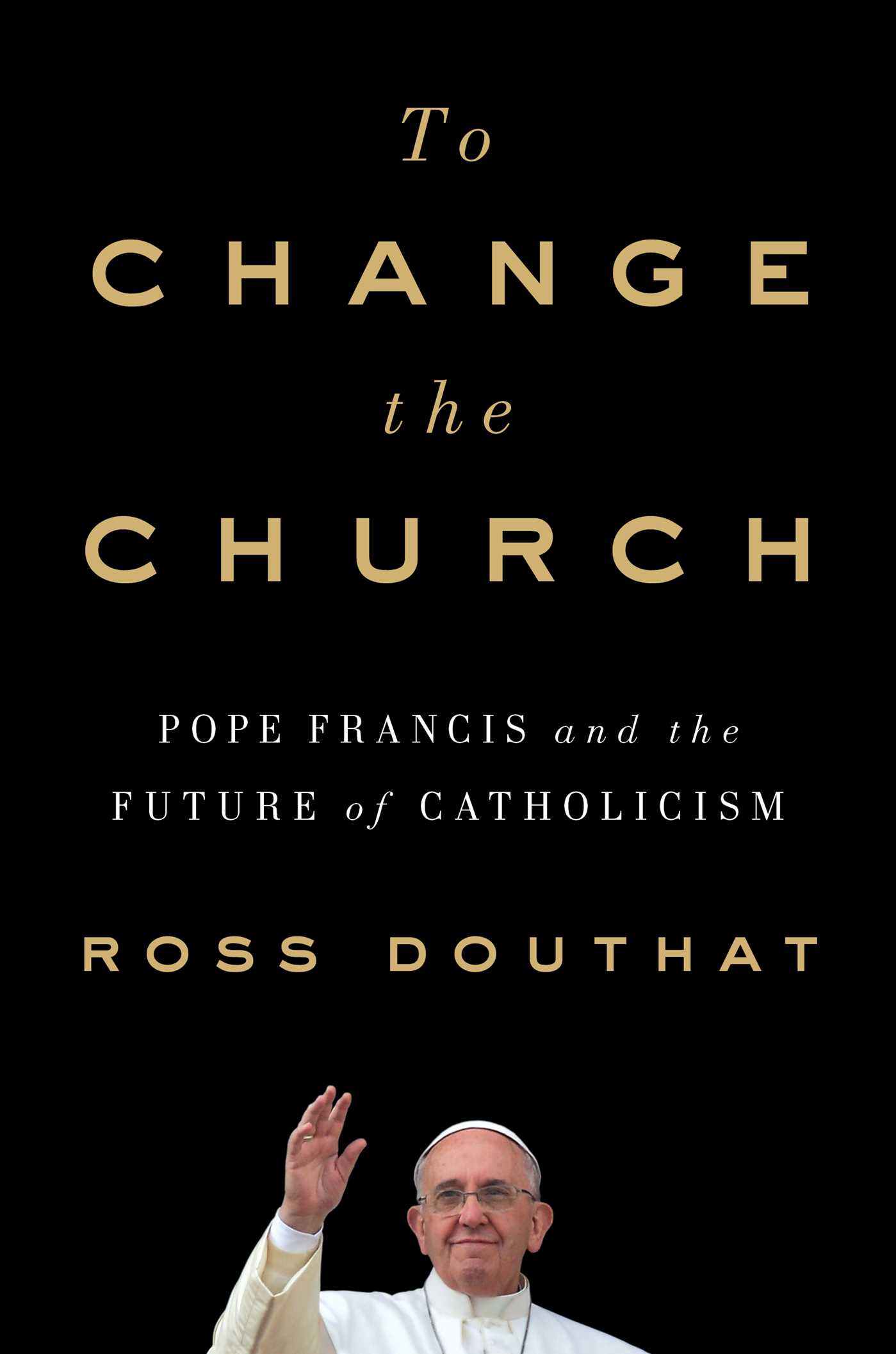 To Change the Church: Pope Francis and the Future of Catholicism

To Change the Church: Pope Francis and the Future of Catholicism

In To Change the Church, Douthat explains why the particular debate Pope Francis has opened—over communion for the divorced and the remarried—is so dangerous: How it cuts to the heart of the larger argument over how Christianity should respond to the sexual revolution and modernity itself, how it promises or threatens to separate the church from its own deep past, and how it divides Catholicism along geographical and cultural lines.

Douthat argues that the Francis era is a crucial experiment for all of Western civilization.

Every pope plays favorites, but Douthat contrasts the gradual and conciliatory hires of the last two popes with Francis’s aggressive hires of liberal favorites for high-profile positions. And criticizing Francis from within the church hierarchy won’t be tolerated, which is perhaps why Douthat took up this project, since Francis doesn’t run the New York Times opinion page (so far as we know). Probably the current pope’s biggest conservative critic, Cardinal Raymond Burke, ended up investigating clerical abuse in Guam.

Not that he intended to do so, but I don’t think Douthat could’ve written a better apologetic for Protestant arguments against the papacy.

Protestants fed up by endless evangelical debates over authority and tempted to convert to Catholicism should first read Douthat’s attempt to explain the byzantine politics of the Vatican. Not that he intended to do so, but I don’t think Douthat could’ve written a better apologetic for Protestant arguments against the papacy.

There’s another, more positive reason Protestants should read this book. I don’t know many writers better than Douthat at exposing the flaws of liberal arguments against orthodox Christianity. Douthat questions how Francis and his liberal allies can believe the Holy Spirit has suddenly led the church in the opposite direction of where he led the church for hundreds of years, and when he inspired the very Scriptures they contradict.

Douthat also repeatedly warns Francis against trying to remake the Catholic Church in the Protestant image. But conservative Protestants, at least, would actually recognize and support many of Douthat’s claims, even if they disagree with him on remarriage and communion. It’s true, Protestant churches with more liberal social views have collapsed. There is no empirical argument for following the flow of Western sexual autonomy. And there is no reason a liberalized Catholic Church would be any different from the Episcopal, Presbyterian, and Lutheran churches in demographic freefall.

Once you’ve accommodated the sexual revolution, Jesus can’t be rescued from his many other hard teachings.

Douthat makes clear the stakes of our sexuality debates. Once you’ve accommodated the sexual revolution, Jesus can’t be rescued from his many other hard teachings. He must go altogether or become a mere puppet for never-ending political vanities. The church can’t survive merely as a mirror for modern mores. It must reflect Christ, in all his ways, for the sake of truth, that we might have life. Douthat writes:

If God wills the suspension of his own law when things get particularly difficult or complicated, whenever too much emotional or physical suffering would be imposed, from the point of view of every Christian who ever suffered or even died for the sake of their hardest passages, the gospels look less like revelation than a somewhat cruel trick.

The revolution may be upon us, orchestrated from the top of the Catholic Church. But not even the pope can change Jesus’s words. And not even the gates of hell can prevail against his church.