In the 1960s, sociologists widely predicted that religion would soon disappear. Now that we’re well into the 21st century, many of these same sociologists admit they were wrong. Religion didn’t go away. Just the opposite in fact: Religion is poised to be a dominant player on the world stage in this century.

This comes as no surprise for those of us who believe. Spirituality can’t be wiped out; humans are fundamentally spiritual beings, created by and for God. As Rebecca McLaughlin puts it in her book Confronting Christianity: 12 Hard Questions for the World’s Largest Religion, the question for this generation isn’t “How soon will religion die out?” Rather, the question is “Christianity or Islam?” (14). 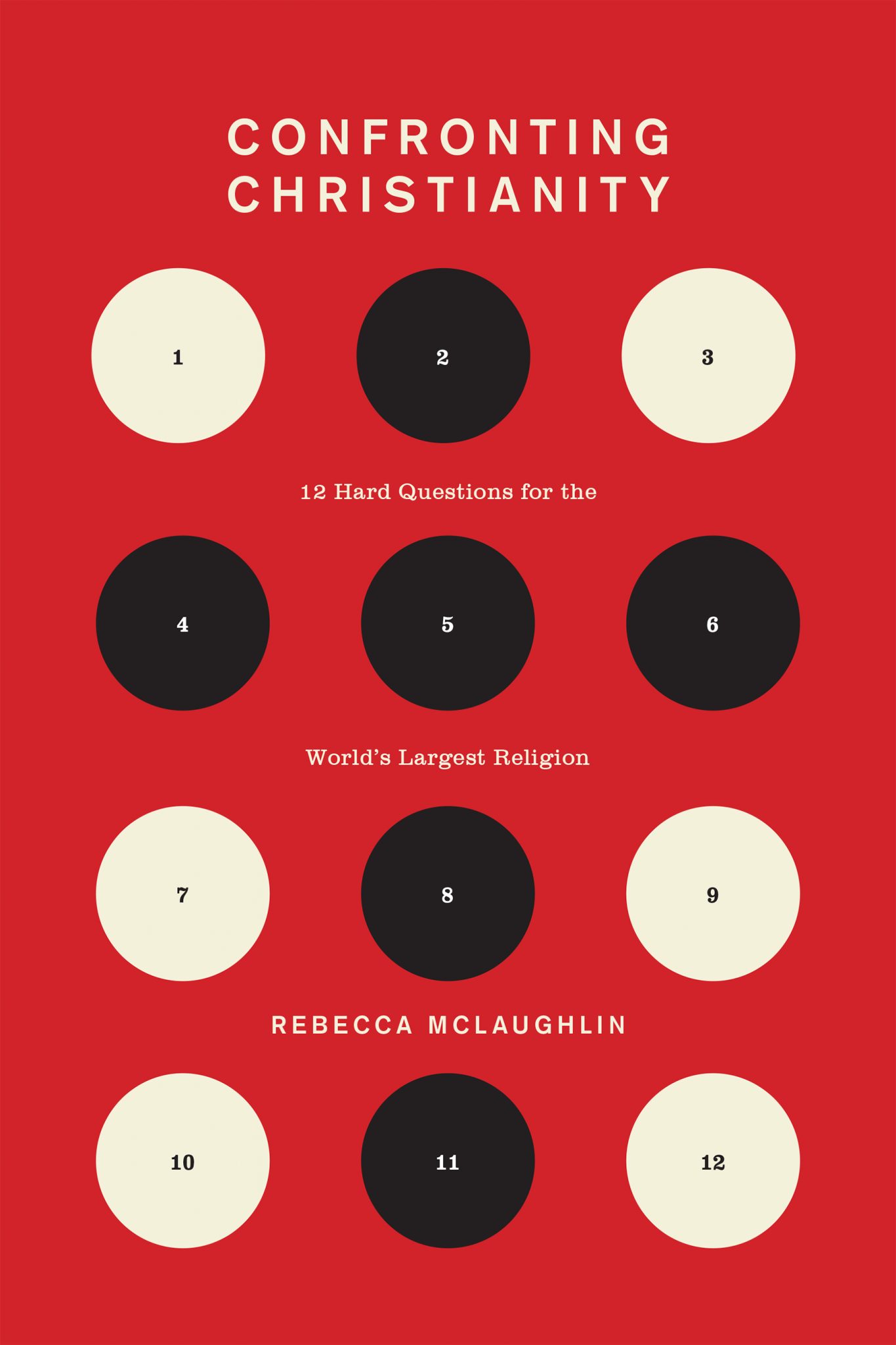 Religion’s decline in the modern world turns out to be a myth. Christianity is the most widespread global belief system, and promises to remain so well into the future. But for many educated Westerners, biblical Christianity is a dangerous idea—challenging some of their deepest beliefs. Channeling state-of-the-art research, personal stories, and careful biblical study, Confronting Christianity explores 12 questions that keep many of us from considering faith in Christ. Look more closely, McLaughlin argues, and the reality of suffering, the complexity of sexuality, the desire for diversity, the success of science, and other seeming roadblocks to faith become signposts.

Many of the hardest questions for faith arise as a byproduct of our now largely biblically illiterate culture. Religion hasn’t gone away, but knowledge of the Bible has. The loud and incessant cries of the so-called New Atheists—that “religion poisons everything” or that “the God of the Old Testament is a moral monster”—haven’t helped either. A key strength in McLaughlin’s book is her ability to cut through that noise and help the reader see and understand the Bible on its own terms.

The question for this generation isn’t, ‘How soon will religion die out?’ Rather, the question is ‘Christianity or Islam?’

The chapter “How can you take the Bible literally?” is worth the price of the book. McLaughlin helpfully distinguishes between literal and figurative language, showing that “some of the deepest truths [of the Bible] are metaphorically expressed” (95). This idea of metaphor helps us understand the big picture. Humans are created male and female in God’s image. Marriage is the joining of two into one. This union is a visible reminder of deep spiritual truths: the relationship between Christ and the church. Understanding the Bible’s overall story, as well as its use of metaphor, helps us see the goodness and beauty of Jesus and the gospel.

It’s simply not true that Christianity is a white man’s religion or innately Western. From the beginning, “the Christian movement was [a] multi-cultural and multiethnic” reality (35). Rather than hinder morality, the evidence shows that Christianity has provided the motivation and theological foundation for universal human rights and religious freedom. Moreover, study after study shows a direct link between religious participation and improved moral character (61). The world is a better place because of Christianity.

When it comes to violence, it’s true some have perpetrated evil in the name of Christ. When they do so, however, they act inconsistently with the teachings of Jesus. “Christianity does not glorify violence,” McLaughlin writes. “It humiliates it” (93). The same can’t be said for Islam, which was violent from the beginning, or atheism, which has inspired much of the evil and suffering perpetrated in the last couple of centuries.

Moreover, science doesn’t disprove God. On the contrary, “belief in a rational Creator God provides the first and best foundation for the scientific enterprise” (110). And Christianity doesn’t denigrate women. In the first century, Christianity provided a “radical elevation of women” (145). Christianity has never been, nor is it today, a male-dominated or male-oriented religion. Generally more active than men in spiritual affirmation and practice, women are vital to the global church and its efforts to extend the gospel to the ends of the earth (145–46).

Some Christian truths are unpopular today, particularly when it comes to the Bible’s teachings on sex. The Bible affirms sex as a gift from God, but there are boundaries. “The Bible is clear that sexual intimacy belongs exclusively to heterosexual marriage” (156). This “boundary cuts off the possibility of sex with anyone else” (157), including sex outside of marriage and homosexual sex. This is an “inconvenient truth” for many, including McLaughlin, who has struggled with same-sex attraction for much of her life.

Christianity is better than you think, because Christ is.

But there is a “greater truth,” too: All of us, married or single, sexually active or not, are invited into a deep spiritual intimacy—communion with God through union with Christ (155). God isn’t a cosmic killjoy. He wants to provide for us. For those who doubt, the evidence from psychology can help us see that God’s divinely imposed boundaries for sex actually bring greater freedom and pleasure, while commitment-free sex—the holy grail of secularism—has resulted in unhappiness, decreased sexual satisfaction, and increased loneliness (146–48).

Two of the toughest objections to Christianity concern evil and hell. How can a good and loving God allow evil? And how is it just or loving for God to send unbelievers to hell? These objections are as difficult as they come. But McLaughlin helps us see that things are even worse if there is no God. For if God doesn’t exist, there is no objective evil. Nor is there final justice for the wrongs we experience in this life, nor any ultimate comfort in suffering.

In the Christian story alone, though, we find the genuine possibility of hope. Jesus Christ took all sin, suffering, and evil on himself on the cross. They’ve been defeated, and one day they will be eradicated. When we locate our lives in the sweeping story of God, we begin to see that “suffering is not the wrecking ball that knocks Christianity down but rather the cornerstone on which, painfully, brick by brick, it has been built” (194).

Suffering is not the wrecking ball that knocks Christianity down but rather the cornerstone on which, painfully, brick by brick, it has been built.

We also begin to understand the question of hell. God has created us as free creatures, capable of morally significant action. God respects our dignity and freedom, even until the end. If we live with a clenched fist toward God, he won’t force us to join him upon death. However, the perfect justice of God demands that the penalty for sin and evil be paid. The natural consequence of a self-directed life is hell: permanent separation from a good and holy God.

But God desires our good. He wants to bring us into a relationship with him, and he gives his Son to pay sin’s penalty in our place. The cross of Christ helps us understand the problem of hell, for there we see the perfect intersection of justice and love.

There are plenty of apologetics books that address the same objections discussed in Confronting Christianity. What makes this book unique is the weaving together of evidence and story.

What makes this book unique is the weaving together of evidence and story.

McLaughlin reframes each objection by taking the reader into the biblical story. She helps us see the goodness, beauty, and truth of the divine drama. She also helps us see that God is better than many of us think, for he pursues us. In love, he sends Jesus so we can find genuine happiness, wholeness, flourishing, and forgiveness.

Indeed, everything points to Jesus as our only hope in this life and in the next. As McLaughlin summarizes,

In Jesus’s world, we find connective tissue between the truths of science and morality. We find a basis for saying that all human beings are created equal, and a deep call to love across diversity. We find a name for evil, and a means of forgiveness. We find a vision of love that is so much deeper than our current hearts can hold, and a true intimacy better than our weak bodies could ever experience. We find a diagnosis of human nature as shot through with sin and yet as redeemable by grace. We find a call to care for the poor, oppressed, and lonely, a call springing from the heart of God himself and grounded in the hope that one day every tear will be wiped away, every stomach will be filled, and every outcast will be embraced. But we do not find glib answers or an easy road. Instead, we find a call to come and die. (222)

Christianity is better than you think, because Christ is.

​Paul M. Gould teaches philosophy and apologetics at Oklahoma Baptist University and is the founder and president of the Two Tasks Institute. He is the author or editor of 10 books including Cultural Apologetics: Renewing the Christian Voice, Conscience, and Imagination in a Disenchanted World (Zondervan, 2019). He is married to Ethel and has four kids and lives in Fort Worth, Texas. You can find out more about Paul at www.paul-gould.com.