The highlight of the Super Bowl for me isn’t the plays, the scores, or the halftime show. It’s the moments when the camera zooms in on the referee, his voice takes on a superhuman boom, and in measured tones he metes out judgment. (I know, I’m weird.)

In his withering new book, Notre Dame sociologist Christian Smith rises above the scrappy fray of public debate about religion and calls foul on four core atheist claims. He writes with a dispassionate tone and scrupulous, academic rigor. He keeps to the umpire’s role. And yet, while pawing through the pages of Atheist Overreach: What Atheism Cannot Deliver, I felt the frequent urge to scribble, “Burn!”

Smith is careful to avoid the kind of overreach he critiques. He isn’t arguing that atheism is false, or that Judeo-Christian theism is true. He simply evaluates whether the claims made by atheist moralists today are intellectually defensible—and throws yellow flags when they aren’t. 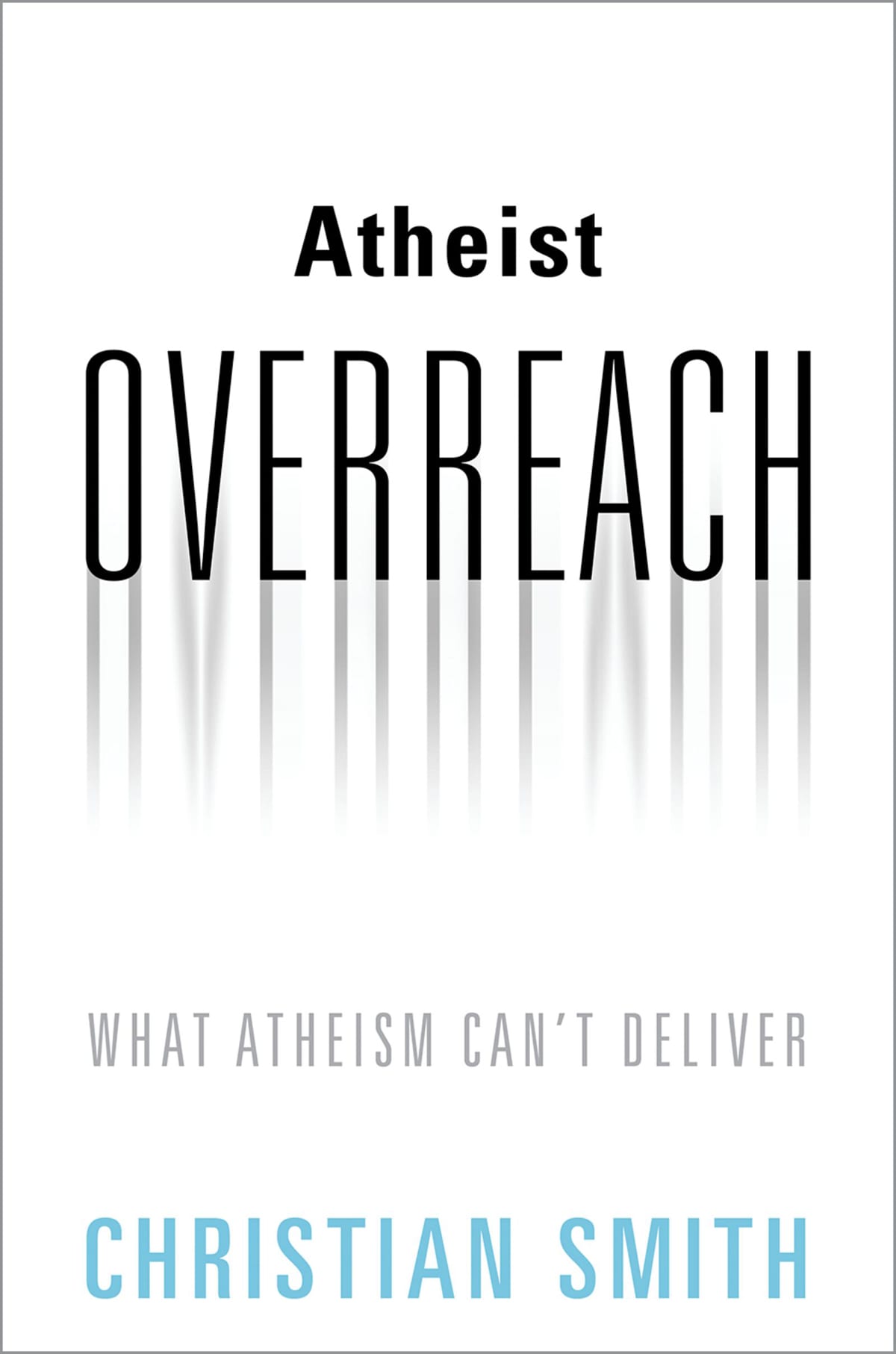 In recent years atheism has become ever more visible, acceptable, and influential. Atheist apologists have become increasingly vociferous and confident in their claims: that a morality requiring benevolence towards all and universal human rights need not be grounded in religion; that modern science disproves the existence of God; and that there is nothing innately religious about human beings. In Atheist Overreach, Christian Smith takes a look at the evidence and arguments, and explains why we ought to be skeptical of these atheists’ claims about morality, science, and human nature. He does not argue that atheism is necessarily wrong, but rather that its advocates are advancing crucial claims that are neither rationally defensible nor realistic.

How Good Should We Be without God?

When it comes to morality, contemporary atheists are making an ambitious play. In their bold new secular world, atheists assure us, a commitment to universal human rights and equality, and sacrificial love to the poor and oppressed, will flow from secular beliefs.

For example, Smith quotes Columbia professor Phillip Kitcher’s claim that atheism compels us to become “responsive to the desires of the entire human population” and to work toward the “provision of equal opportunities for worthwhile lives for all” (14). With equivalent daring, New Atheist author Sam Harris asserts that being good without God entails promoting “happiness for the greatest number of people” and “maximiz[ing] personal and collective well-being for all humanity” (15).

But, as Smith points out, none of the atheist moralists he quotes gives convincing reasons for the universal scope of our obligations toward other humans.

Like a careful archeologist, Smith brushes the rhetorical sand off common arguments (social contract appeals, utilitarian arguments, and so on), explaining how each fails to deliver the robust moral framework that atheists promise. Sure, their arguments may motivate people out of the scrimmage of sheer self-interest to care about “a limited set of people who matter to them” (18). But they don’t come close to the end zone of universal human rights. We can imagine quite different moral conclusions from atheist starting points. Indeed, we’ve seen them play out multiple times in the last century.

To be sure, many modern Westerners take universal benevolence and human rights to be self-evident moral truths. But, as Smith reminds us, these aren’t free-standing moral facts, ready to be discovered like scientific laws. Rather, they are historically contingent beliefs growing out of Judeo-Christian tradition. Someone who “believes in a naturalistic cosmos,” he acknowledges, “is perfectly entitled to believe in and act to promote universal benevolence and human rights, but only as an arbitrary, subjective, personal preference—not as a rational, compelling, universally binding fact and obligation” (49).

How Good Will We Be without God?

One of the book’s strengths is that Smith assesses atheist arguments both theoretically and also practically. In one of his most devastating moves, he highlights an irony in the atheist’s position. Atheism can’t offer compelling reasons why an individual should care about the welfare of those beyond their own immediate sphere. If atheism is correct, therefore, then “human practices of ethics will function more effectively if the general public remains in obfuscated darkness about morality’s mere human origins and sheer functional purposes” (29). This, Smith observes, “is a perverse bind for atheists, who claim to be our greatest champions of enlightened intelligence, scientific reason, and education in the facts” (29). The irony becomes more pronounced when we realize that allowing people to remain religious is perhaps the best strategy for an atheist intellectual who wishes to promote expansive altruism at a societal level.

Smith notices a further irony in common atheist arguments. Despite positioning themselves as no-nonsense realists, atheist moralists tend to gloss over the weaknesses in their system by assuming what he calls “a naïvely optimistic view of human nature” (36). He quotes journalist and author Katherine Ozment to illustrate this point: “I’ve always believed that people are basically good—they just need structures in their lives to reinforce that goodness.” But Smith sees “little evidence in history or the contemporary world” for this idea (39).

Moreover, far from shedding religion being the key to humanity attaining moral goodness, removing religious motivations and constraints leaves gaping holes. For instance, Smith observes that while atheists “scorn the idea of a punishing God who induces fearful obedience, in the end they must substitute their own version of the same, a watchful and punishing human society to secure moral order” (30). Again, 20th-century history and today’s world furnishes us with many examples of atheist societies doubling down on such enforcement.

Smith devotes the third chapter to calling foul on atheists making metaphysical pronouncements as if they’ve been justified by science. As one example, he quotes a line from Yuval Noah Harari’s bestseller, Sapiens: A Brief History of Humankind: “There are no gods in the universe . . . outside of the common imagination of human beings” (Sapiens, 28). Claims like this punctuate Harari’s otherwise scientific account of humanity’s deep past. And Smith’s voice booms out across the field: “Said plainly, Harari is here engaging in a deceptive sleight of hand, an unacknowledged smuggling of atheological metaphysics in through the back door of science, ostensibly with the authority of science” (89).

With a flurry of equivalent quotations, Smith exposes how common this practice is. Atheist scientists and writers leave us with the impression that science has disproved God, when no such case has actually been made. Indeed, as Smith observes, science cannot validate “atheism, a pointless universe . . . or any similar claim of metaphysical atheology” (102). Evaluating such claims simply isn’t within science’s scope. Once more, atheists have overplayed their hand and failed to write with academic rigor.

Will the Atheist Project Finally Succeed?

The last chapter of Smith’s book considers whether humans are naturally religious. He argues that religious belief is endemic to the human condition, even though individual humans can certainly reject religious beliefs, and societies have been known to function well with low levels of religiosity. Humans naturally ask questions and harbor desires that religious beliefs and experiences fulfill: desires for ultimate meaning, final hope, and ecstasy. Given these deep human needs, Smith argues that the “secular humanist, and New Atheist visions for a totally secular human world are simply not realistic—they are cutting against a very strong ‘grain’ in the structure of reality and so will fail to achieve their purpose” (115).

Further, the cut-and-dried distinction atheists attempt to make between religious belief and other forms of knowledge is ultimately untenable: “There is no universal, rational foundation upon which indubitably certain knowledge can be built. All human knowing is built on believing” (117). This, Smith concludes, is the human condition.

While making an important case, this final chapter takes an already intellectually meaty discourse into even less accessible territory. If you spend your coffee breaks discussing critical realism, positivist empiricism, and postmodern deconstructionism, you’ll eat it up. But this final movement of Smith’s symphony would’ve been more effective were it somewhat easier listening.

Throughout the book, Smith takes atheist leaders to the intellectual turf. For those who can track with him, it’s an exhilarating ride. But where many of the writers he critiques have mastered the art of accessible writing, Smith’s book is heavy on argument and light on illustrations. His voice booms out over the field, but some of his terms will leave a general audience rubbing their temples. Seldom does one wish a book were longer, but Smith’s focused, 130-page assault on atheist overreach could’ve been made more accessible if it had more space to breathe, more stories to tell, and more metaphorical pictures to paint.

Nonetheless, if an academic register is at all within your range, I highly recommend you read this book. It’ll sharpen your thinking and equip you to help others dissect common atheist claims. Importantly, its tone isn’t that of a gleeful take-down, but rather a careful critique of ideas.

We evangelicals have too often conceded the intellectual high ground to atheists. Smith—a former evangelical, now Catholic academic—has mounted that terrain. Let’s take the map he’s made for us and raise our game.

Rebecca McLaughlin holds a PhD from Cambridge University and a theology degree from Oak Hill Seminary in London. She is the author of The Secular Creed: Engaging Five Contemporary Claims (TGC, 2021) and Confronting Christianity: 12 Hard Questions for the World’s Largest Religion (Crossway, 2019). You can follow her on Twitter or Instagram, or her website.