His new book, Enlightenment Now: The Case for Reason, Science, Humanism, and Progress, bursts with data suggesting that such progress is “inspired by the ideals of the Enlightenment: reason, science, humanism, and progress.” He dismisses the view that the world is “going to hell in a handcart” due to the global erosion of Christian moral foundations, calling it “wrong, wrong, flat-earth wrong.” No, the world is getting better, and it doesn’t need Christianity’s help.

I agree with Pinker that the world has improved over time, and that Enlightenment values played a big role in improving it. I disagree that the improvement has come at the expense of Christianity; in fact, it has been fueled by it. The world is becoming more Christian, not less. And as historian Dominic Erdozain has argued, the light of the Enlightenment was “loaded with Christian assumptions” and “as religious as anything that came before it—a time of spiritual awakening as well as criticism and doubt.” Indeed, far from cutting against Christianity, “reason, science, humanism, and progress” are profoundly Christian goods. 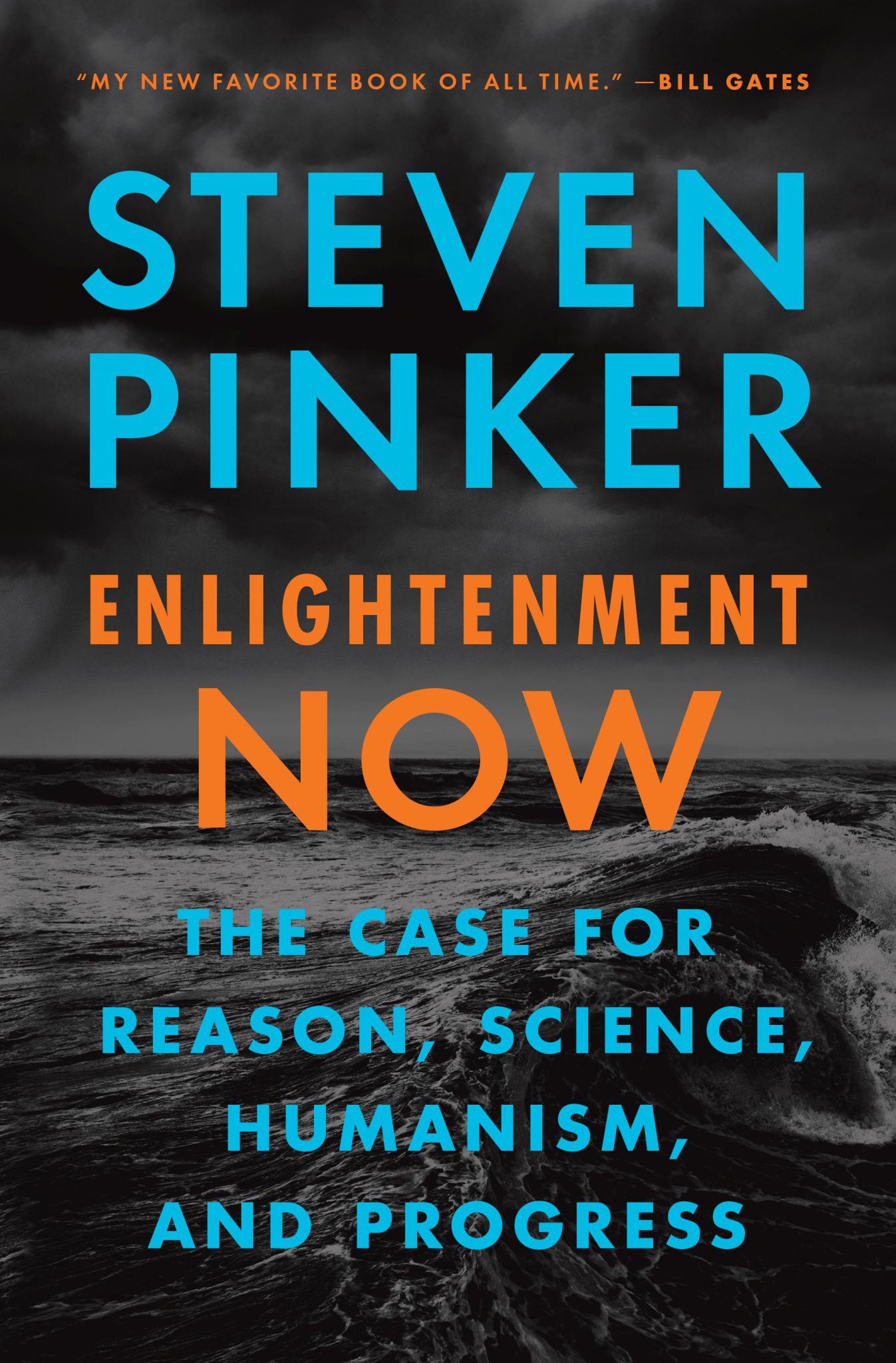 Enlightenment Now: The Case for Reason, Science, Humanism, and Progress

Enlightenment Now: The Case for Reason, Science, Humanism, and Progress

Is the world really falling apart? Is the ideal of progress obsolete? In this assessment of the human condition in the third millennium, cognitive scientist and public intellectual Steven Pinker urges us to step back from the gory headlines and prophecies of doom, which play to our psychological biases. Instead, follow the data: In 75 jaw-dropping graphs, Pinker shows that life, health, prosperity, safety, peace, knowledge, and happiness are on the rise, not just in the West, but worldwide. According to Pinker, this progress is a gift of the Enlightenment: the conviction that reason and science can enhance human flourishing.

If you’re willing to undertake this marathon read, you’ll learn much from Pinker’s book. His synthesis is broadly compelling. But his failure to acknowledge Christianity’s role in progress, and his consistent dismissing of religion (usually undifferentiated) as detrimental to human advancement, is disappointing—even on his own terms.

Pinker celebrates science as an engine of progress. But like other atheists, he fails to recognize its Christian origins. The scientific method was first developed by Christians because they believed in a rational God who created the universe according to rational laws—laws that could be discerned by his image-bearers. According to Princeton professor and philosopher of science Hans Halvorson, theism remains the best philosophical grounding for science. Indeed, atheism per se does not ground science at all.

Assuming a science-versus-faith paradigm, Pinker makes sweeping statements like this:

The moral worldview of any scientifically literate person—one who is not blinkered by fundamentalism—requires a clean break from religious conceptions of meaning and value. (394)

This will come as a surprise to the thousands of world-class scientists who cling unrepentantly to Christian conceptions of meaning and value. Francis Collins, head of the National Institute of Health, is a case in point. So, what is Pinker’s logic? Religions are “factually mistaken” about the scientific origins of the universe; therefore, they can’t be trusted on other questions (394). Of course, this ignores the range of interpretations of Scripture’s creation accounts—not just in recent centuries but going back to the church fathers.

Asking science to give us ethics is like asking a blood pressure monitor to heal a broken heart.

Indeed, the precise relationship between science and ethics haunts this book like an awkward ghost. According to Pinker, “The worldview that guides the moral and spiritual values of a knowledgeable person today is the worldview given to us by science.” He then qualifies, “Though the scientific facts do not by themselves dictate values, they certainly hem in the possibilities.” But do they? As Pinker has observed elsewhere, if we take ethics only from what evolution has bequeathed to us, then virtue is equated with “sacrifices that benefit one’s own group in competition with other groups . . . fascism would be the ultimate virtuous ideology.”

Science can tell us how things are, but not how things ought to be. It can yield vital insights regarding how we can best execute our values. But science can’t tell us whether to care about human life, which humans to care for, or what caring truly means. This is no blow against science. Asking science to give us ethics is like asking a blood pressure monitor to heal a broken heart.

Pinker advocates vociferously for the application of reason to ethics. The result is humanism. But the lack of foundation within his worldview for what a human being is makes this a problematic cake to bake. He believes that when people shed their religious preconception, they realize that equal human value, religious freedom, gender equality, and so on are universal goods. But do they? With no lack of belief in scientific atheism, communism—the most widespread worldview to have shed religious preconceptions—has yielded not liberal democracies, but oppressive, genocidal regimes. Without a basis for defining what a human being is (beyond atoms and molecules), defining universal ethics is like pinning jello to a wall.

One example illustrates this tension. Pinker celebrates the fact that infant and young-child mortality has “plunged a hundredfold” in the last century” (57). Praise God! But the good of reduced infant mortality becomes complicated when we rip out any Christian foundation for recognizing all humans as beings of immense intrinsic value. We’re left with the underlying tension of a worldview that rejoices in the reduction of infant mortality while upholding the right to late-term abortions. The reasoning, at this point, is a little hard to follow.

Pinker demonizes Christianity and refuses to acknowledge its contributions to reason, science, humanism, and progress.

Pinker’s litmus test for progress is human flourishing, broadly conceived. But he’s conflicted on the question of happiness, preferring at times to privilege meaning over happiness itself. This is partly because the data on happiness are a little awkward for him. Revealingly, he dismisses data showing that actively religious people are happier, healthier, and longer-lived than their secular peers with George Bernard Shaw’s quip, “The fact that a believer is happier than a skeptic is no more to the point than the fact that a drunken man is happier than a sober one” (287). Surely, if Pinker were as data-driven as he aspires to be, he’d be keenly interested in the positive effects of religious participation, as summarized here by fellow Harvard professor and public health expert, Tyler VanderWeele.

Given the implications of the data he explores for billions of lives, one might think someone committed to truth over partisanship would be willing to take off his team colors and devote his energies to the common cause of working toward progress for all. But Pinker demonizes Christianity and refuses to acknowledge its contributions to reason, science, humanism, and progress.

Stripping off the team colors, what’s left of Enlightenment Now and how should we think about the data from a Christian perspective? Are Christians committed to believing the world is “going to hell in a handcart” and resisting a narrative of general progress toward global human flourishing? I don’t think so. Just as Christians needn’t be afraid of science or reason (both core parts of our intellectual heritage), Christians needn’t be voices of doom when it comes to humanitarian progress. Indeed, we should be the first to celebrate such advances and put our backs into pushing them further.

Pinker cites a Christianity-rejecting Enlightenment as the source of such progress, obfuscating the fact that much of what he celebrates substantially pre-dates the Enlightenment (e.g. the scientific revolution) and that many leading Enlightenment thinkers had profound religious convictions. As philosopher Ronald Osborn’s book Humanism and the Death of God: Searching for the Good After Darwin, Marx, and Nietzsche explains so well, the influence of Christianity on values and norms we now see as universal is profound. And we should celebrate this progress.

Jesus claimed he’d come to bring “good news to the poor” (Luke 4:18). He decried racism, raised the status of women and children, insisted on love across difference, and placed care for the weak and oppressed at the bulls-eye center of ethics. For all the failures of Christians through the ages, Jesus’s followers went on to found universities, discover science, and start hospitals. Two thousand years later, should it surprise us if the world has become a better place?

Rebecca McLaughlin holds a PhD from Cambridge University and a theology degree from Oak Hill Seminary in London. She is the author of The Secular Creed: Engaging Five Contemporary Claims (TGC, 2021) and Confronting Christianity: 12 Hard Questions for the World’s Largest Religion (Crossway, 2019). You can follow her on Twitter or Instagram, or her website.